During ancient times, there were no means of transport available. People used to travel on foot or used animals for travelling or carrying goods. With the passage of time ‘wheel’ was invented. This marked a huge revolution in the modes of transport for humans. Since then there has been continuous inventions and improvements in modes of transport. Steam engine was invented which made a huge impact and played a very important role in shaping the world as we know it today.

Transportation thus has a long history.  Did the people know how far they had to travel? For reaching any place, one should have an idea of how far the place is? This helps to decide how to reach that place- by walking, taking the train, bus or aeroplane. To measure how far a place is, we need to measure the length between the places. But, what does measurement mean? How do we measure a physical quantity? Measurement is the comparison of an unknown quantity with a known quantity. The result of measurement is expressed by a numerical value known as ‘magnitude’ and a ‘unit’. A ‘unit’ is a chosen standard of comparison in terms of which other similar physical quantities are measured.

For measuring large lengths kilometer is used as the unit of length. The relationship between different units of length is as follows:

By using these units for the measurement of length, we can measure how far two places or objects are. The numerical description of how far objects are is known as distance. Now, to reach his place, different routes are available. Suppose in one route there is an ice-cream parlor and you want to have ice-cream from there.

To measure the distance travelled via this route to your friend’s house you can take a thread and put it on the road throughout. Finally, you can extend this thread to measure how long it is using any scale of measurement.

In another route you have to pick up a friend who is at position C and then go to your friend’s place. This distance can also be measured using a thread and extending it to figure out its length.

The distance travelled in both the cases is obviously different. Thus, different paths will have different distances. 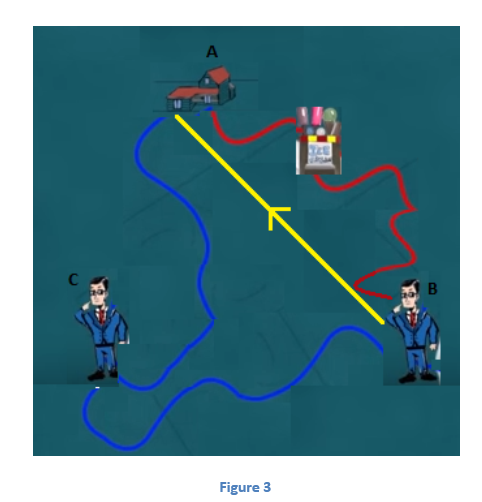 Amongst all the routes you take, there will be one route in a particular direction which will be the shortest. This shortest straight line distance in a specific direction is known as displacement. It is represented by the yellow line in fig. 3 directed from B to A.