Aldehydes and Ketones are characterised by the presence of Carbonyl group >C = O in their molecules. Aldehydes contain group

The carbon and oxygen of the carbonyl group are sp2 hybridised and the carbonyl double bond is made of one s bond and one p bond.

The electronegativity of oxygen is much higher than that of carbon, the p electron cloud is displaced towards the oxygen. Therefore the C–O bond is polar in nature and carbonyl compounds possess dipole moment (2.3 to 2.8 D)

GENERAL METHODS OF PREPARATION OF ALDEHYDES

PCC is pyridinium chlorochromate known as Collin’s reagent and is specific for oxidation of 1º alcohol to aldehyde.

GENERAL METHODS OF PREPARATION OF KETONES ONLY

It is due to + I effect of alkyl groups which decreases the +ve charge on carbonyl carbon.
Steric hindrance : The bulky alkyl group hinder the approach of nucleophile.
a-hydrogen atom is acidic in nature due to Resonance 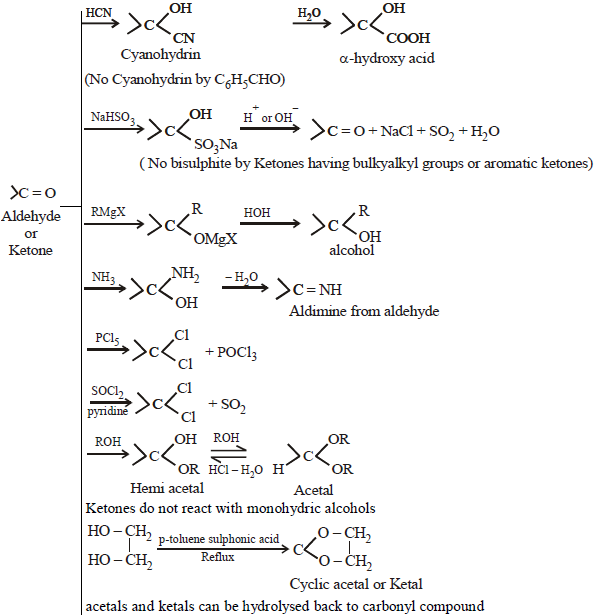 The followings reaction in different ways with NH3 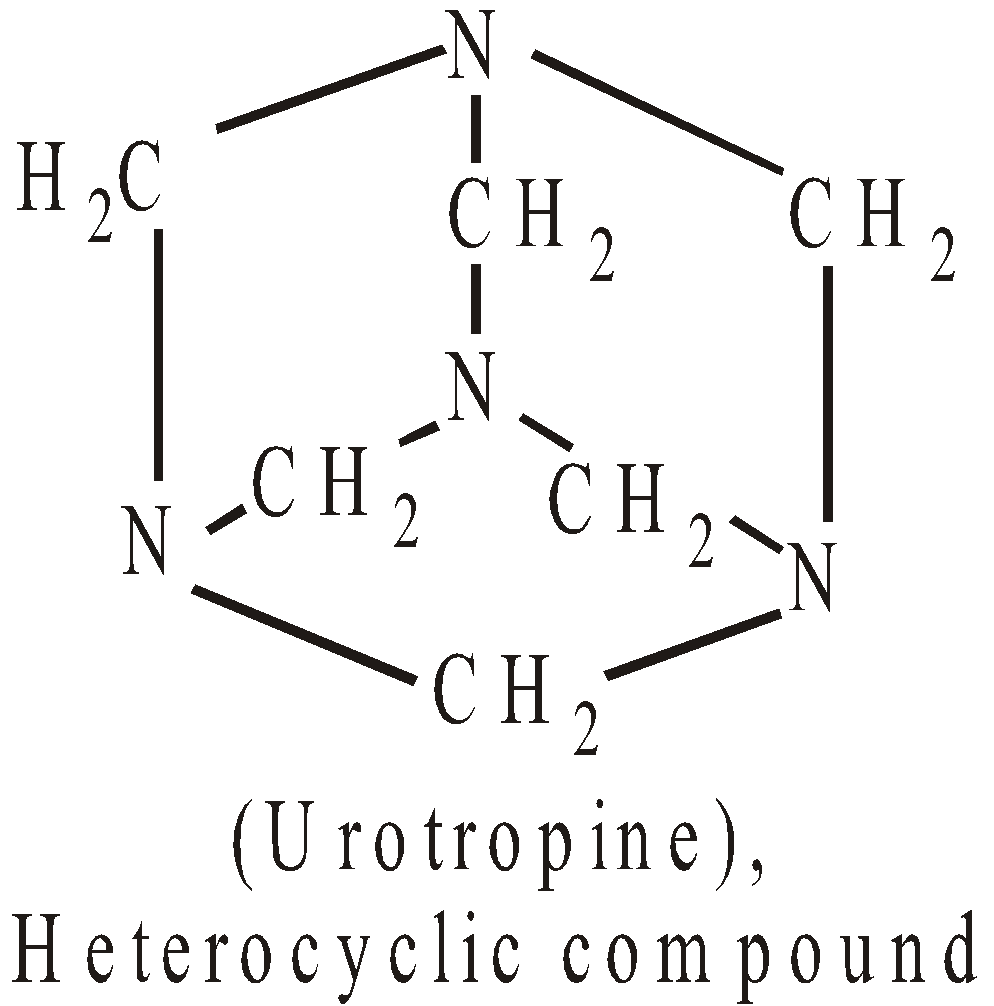 It is used as urinary antiseptic. 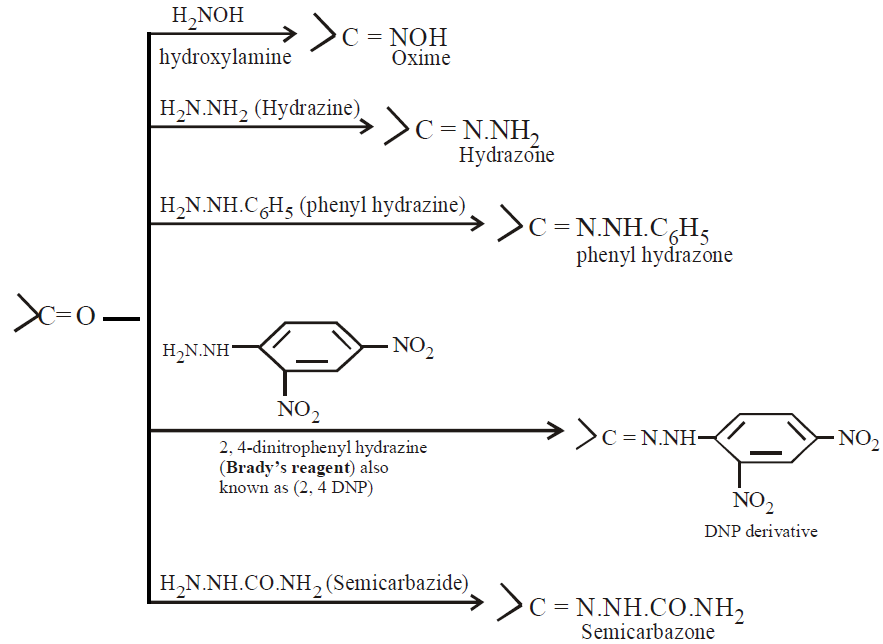 The control of pH is must for these reactions. The optimum value is around 3.5.
Control of pH during formation of ammonia derivatives :

Ketones are oxidised by strong oxidising agents such as Conc. HNO3, K2Cr2O7/H2SO4, KMnO4/H2SO4
OXIDATION WITH SeO2The CH3 group adjacent to 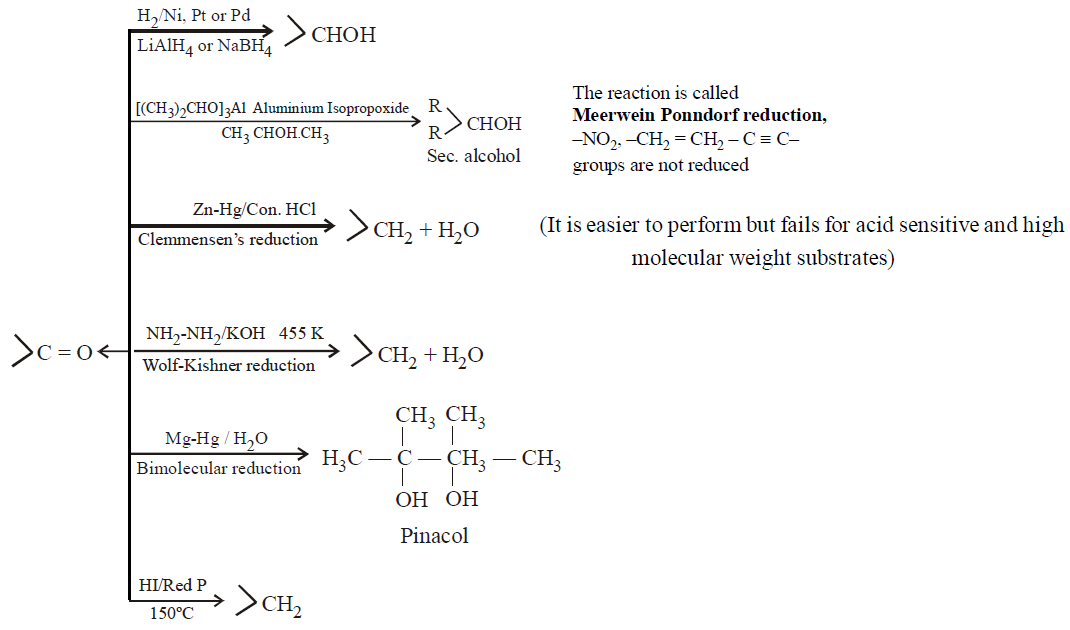 ALDOL CONDENSATION
Aldehydes and Ketones having at least one a-hydrogen atom in presence of dil. alkali give b- hydroxy aldehyde or b-hydroxy ketone, which on heating gives a,b-unsaturated carbonyl compound.

REFORMATSKY REACTION
It is the reaction between an a-bromo acid ester and a carbonyl compound (aldehyde or ketone) in the presence of zinc to form a b-hydroxy ester.

Above reactions are not aldol condensations.
POLYMERS OF FORMALDEHYDES

(Combination of CO + HCl act as formyl chloride HCOCl)
It is an electrophilic substitution reaction, the electrophile

REACTION OF CHO GROUP GIVEN BY AROMATIC ALDEHYDES 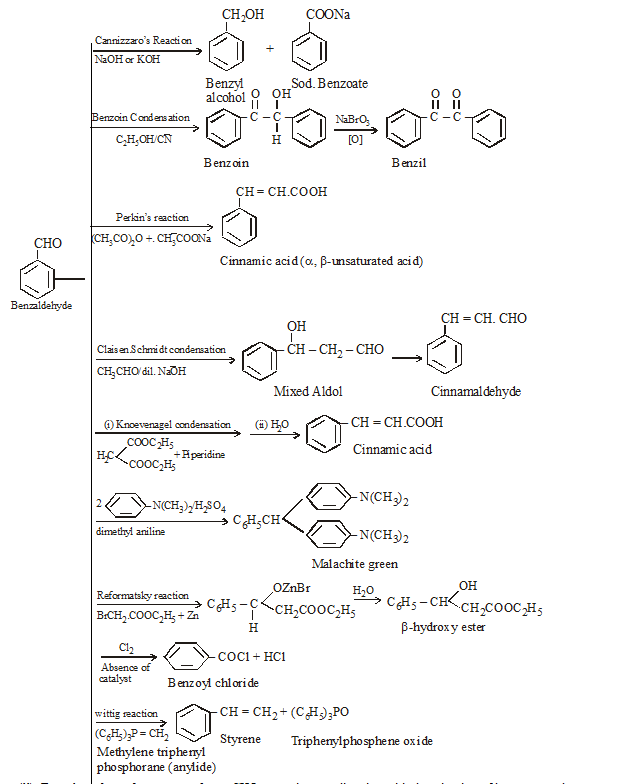 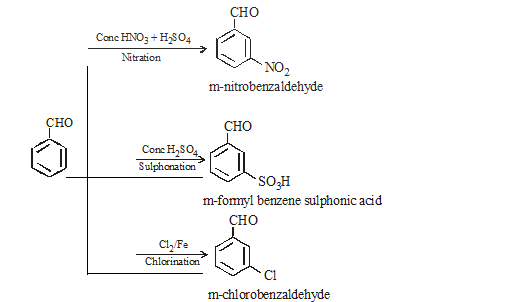 It is colourless crystalline compound m.p. 20ºC, b.p. 202ºC.
At room temperature it is coloured liquid.

Its vapour attack nose, throat and lungs. It is used as tear gas.

It is used as hypnotic in medicine.

CARBOXYLIC ACIDS AND THEIR DERIVATIVES

are called Carboxylic acids. The word carboxyl is a combination of two words carbonyl (>C=O) and hydroxyl (–OH).

Depending upon the number of –COOH groups they are  classified as

etc. The carbon atom adjacent to carboxyl group is assigned the letter

IUPAC SystemThey are named as Alkanoic acids eg.
HCOOH  Methanoic acid
C3H7COOH Butanoic acid
While naming the complex acids, the longest chain is picked up and the carbon atoms are numbered starting from carboxyl group which is given number 1. 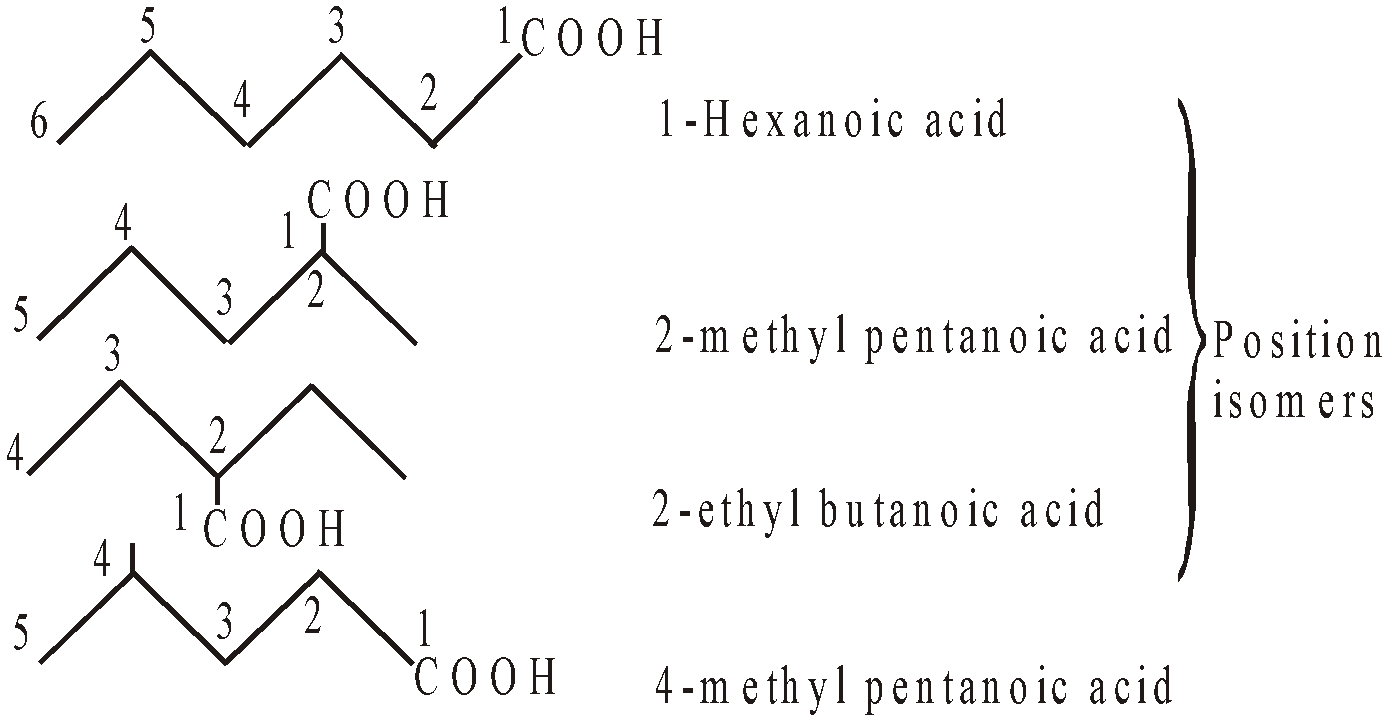 2, 3 – dimethyl butanoic acid All the seven are chain Isomers

Alkaline hydrolysis of an ester is known as saponification

Acids upto C10 are liquids with unpleasant odours. The higher members are colourless waxy solids. Boiling points of acids increase regularly with molecular weight and higher than alcohols (of comparable molecular mass) due to formation of dimer through H-bonding

Acids upto C4 are completely soluble in water due to H-bonding. Solubility regularly decreases rapidly due to increase in hydrophobic character of alkyl group. 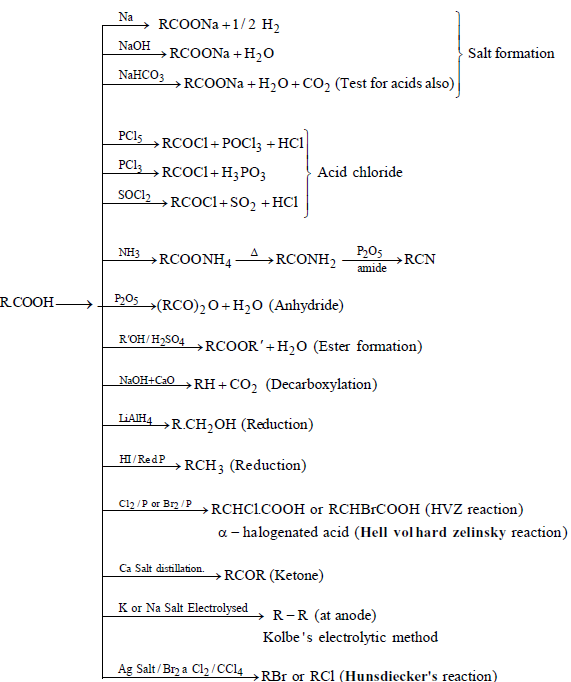 ACTION OF HEAT ON FORMATES

The compounds obtained by replacing –OH group of

in acid by –X, –OCOR, –OR or –NH2 are called acid derivatives. They are

PHYSICAL PROPERTIES
Acid Chlorides are polar in nature, still insoluble in water due to absence of hydrogen bonding which is also the reason of their having low b.p. than acids.
CHEMICAL PROPERTIES 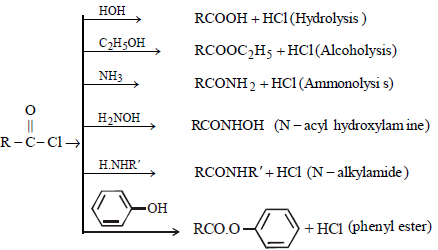 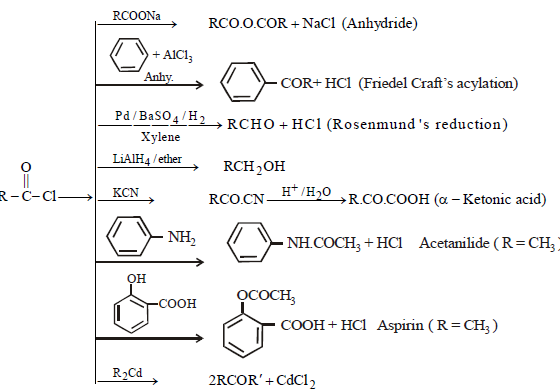 USES
Acetic anhydride is used as acetylating agent in the manufacture of plastics, cellulose acetate and polyvinyl acetate. 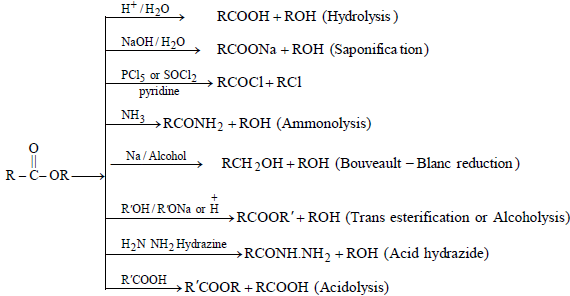 Note. Alcoholysis is usually effective in replacing a higher alcohol by lower one eg.

Hydrolysis of carboxylic esters may be formulated in two ways

USES OF ESTERS
In making artificial essences and flavours. 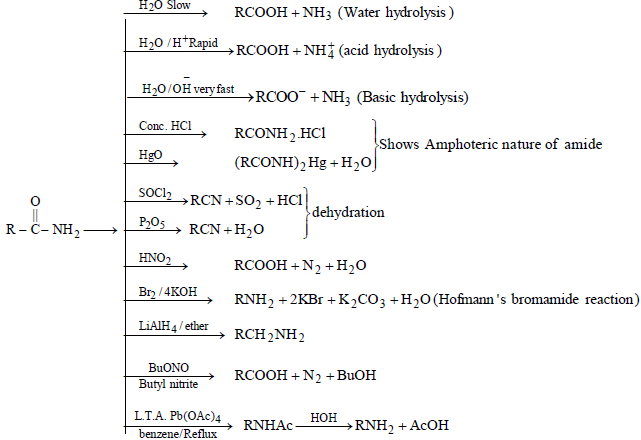 It is diamide of carbonic acid

Urea is the normal end product of protein metabolism and excreted in urine about 30 gm in 24 hours by an adult person.
PREPARATION 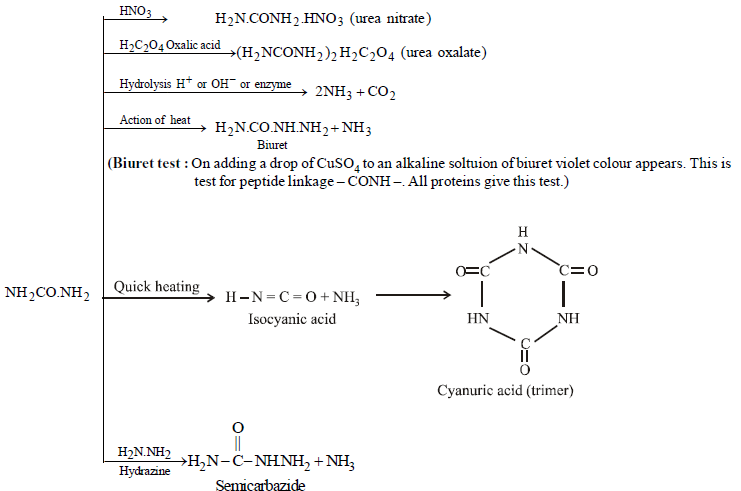 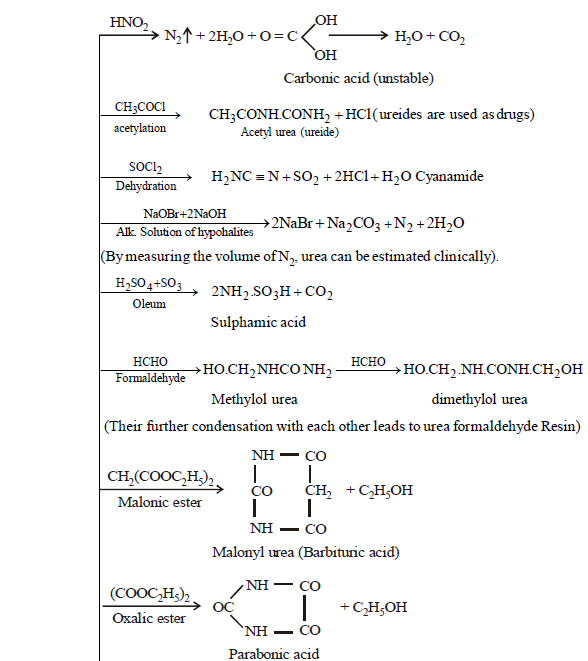 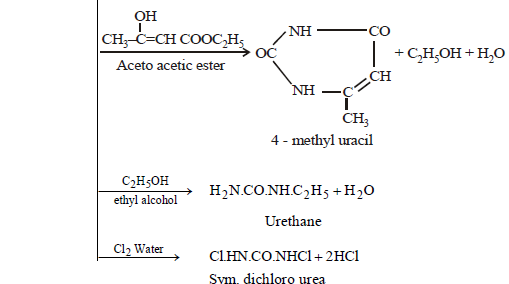 The acids obtained by replacing one or more hydrogen atoms from the alkyl group of the acid by groups such as Cl, OH, CN, NH2 etc are known as substituted acids. The position of the latter is indicated by Greek letters like a, b, g, d etc (common system) or by numbers like 1, 2, 3 etc (IUPAC System) eg.

The compounds containing two carboxyl groups are known as dicarboxylic acids. They have the general formula CnH2n (COOH)2
NOMENCLATURE
Their IUPAC group name is Alkanedioic acid

GENERAL PROPERTIES
Acid Oxalic acid Malonic acid Succinic acid Glutaricacid Adipic acid
pka 1.271 2.86 4.21 4.34 4.41
This is due to –I effect of the carboxylic group which decreases with the length of the carbon atom chain.

It occurs in free state in tamarind and as potassium salt in various fruits such as grapes, plums, etc.
PREPARATION 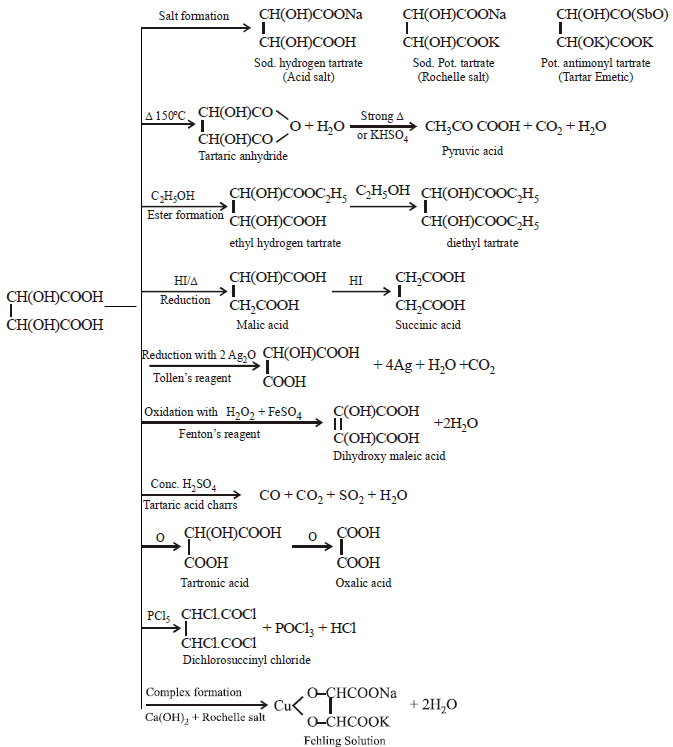 PROPERTIES
It is colourless crystalline substance. Its m. pt. is 100ºC soluble in water and alcohol. Insoluble in ether. Optically inactive. 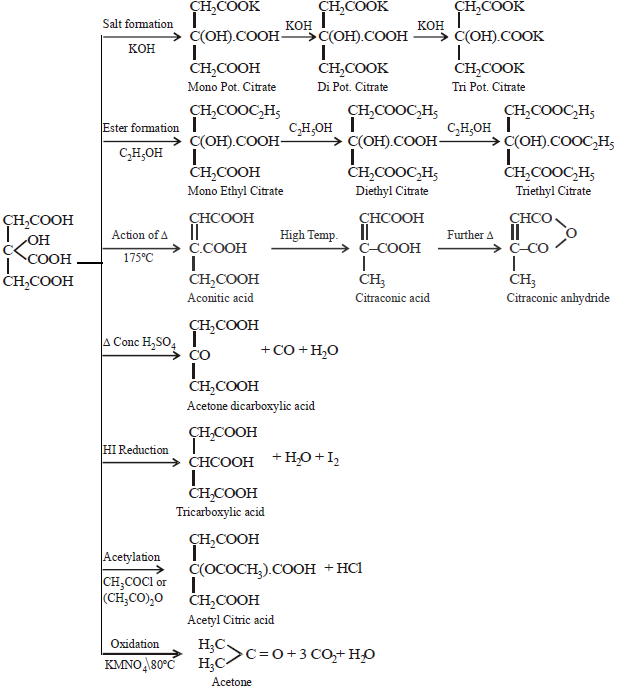 It is more stable than Fehling solution
USES 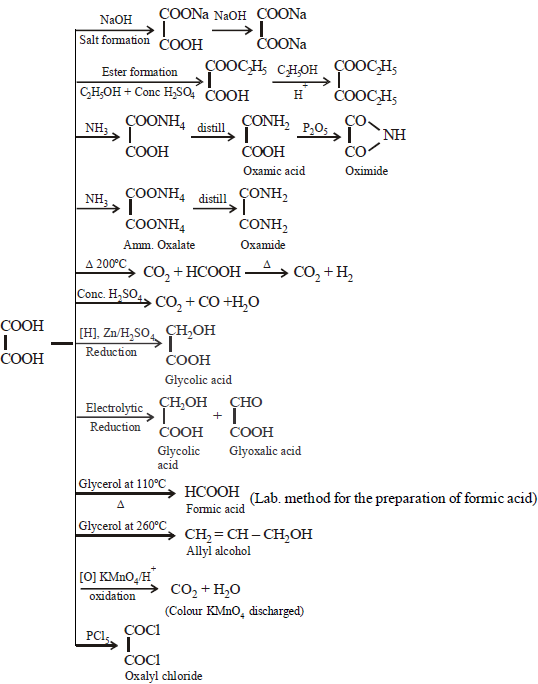 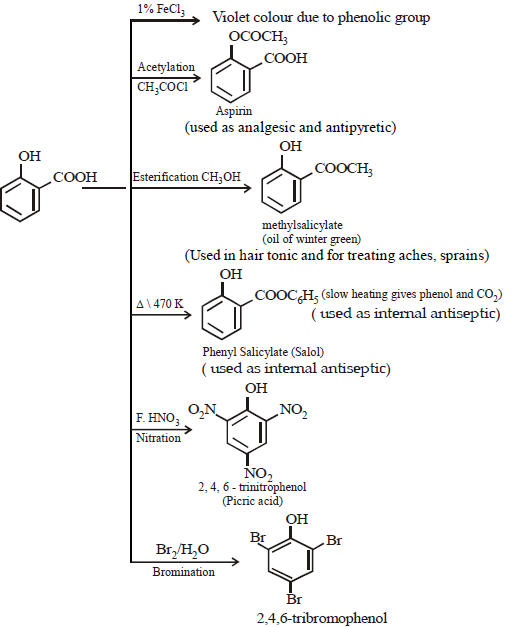