Notes and Study Materials -Classification of Elements and Periodicity in Properties

THE PERIODIC TABLE OF THE ELEMENTS 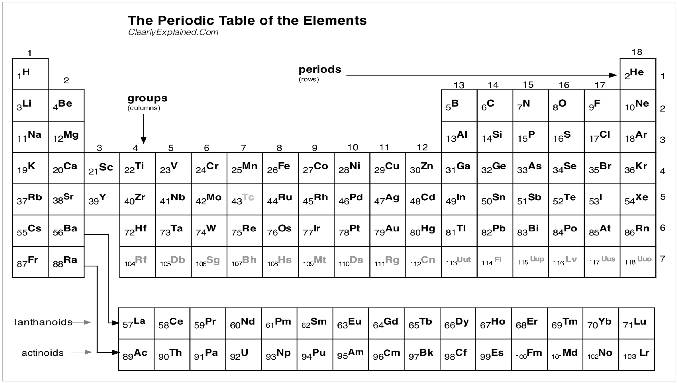 It is a table of elements in which the elements with similar properties are placed together.

This was the classification of elements into groups of three elements each with similar properties such that the atomic weight of the middle element was the arithmetic mean of the other two e.g. Ca, Sr, Ba; Cl, Br, I etc.
The difference between atomic weights of any two successive elements is nearly constant.

This was an arrangement of elements in order of increasing atomic weights in which it was observed that every eighth element had properties similar to those of the first just like the eight node of an octave of music.

This is based upon Mendeleev’s periodic law which states that the physical and chemical properties of the elements are a periodic function of their atomic weights.
Mendeleev named Gallium and Germanium elements as eka-aluminium and eka-silicon respectively.

Moseley formed the basis of the modern periodic law. He discovered that the square root of the frequency of the more prominent X-rays emitted by a metal was proportional to the atomic number and not the atomic weight of the atom of the metal. Hence atomic number should be the basis of classification of the elements.
Modern periodic law states, “that the physical and chemical properties of the elements are a periodic function of their atomic number.”
It was observed that the elements with similar properties reoccurred at regular intervals of 2, 8, 8, 18 or 32. These numbers (2, 8, 8, 18 and 32) are called magic numbers, and cause of periodicity in properties.

STRUCTURAL FEATURES OF THE LONG FORM OF THE PERIODIC TABLE

2He) contains 2 elements. It is the shortest period.
Short periods – 2nd period (3Li

NOMENCLATURE OF ELEMENTS WITH ATOMIC NUMBER > 100

According to IUPAC the nomenclature can be derived using numerical roots for 0 and numbers 1-9 for atomic numbers of elements.
The roots are put together in order of digits which make the atomic number and ‘ium’ is added at the end. Use the following table

This is called diagonal relationship and is due to the reason that these pairs of elements have almost identical ionic radii and polarizing power. (i.e. charge/size ratio).

Properties which show a regular gradation when we move from left to right in a period or from top to bottom in a group are called periodic properties. These properties are atomic size, ionisation energy electron affinity etc.

where d = internuclear distance between two covalently bonded like atoms.
Van-der Waal’s radius : It is one-half of the distance between the nuclei of two adjacent atoms belonging to two neighbouring molecules of an element in the solid state.
The covalent radius is always smaller than the corresponding van der waal’s radius.
Metallic radius : It is half of the distance between two successive nuclei of two adjacent metal atoms in the metallic closed packed crystal lattice. Metallic radius of an element is always greater than its covalent radius.
Ionic radius :  It is the effective distance from the nucleus of the ion upto the electrons in the outer shell to which it can  influence the ionic bond.
An atom can be changed into a cation (by loss of electron) which is always much smaller than the corresponding atom, or to an anion (by gaining of electrons) which is always larger than the corresponding atom.
FACTORS INFLUENCING COVALENT RADIUS
Bond length     Radius of C-atom

PERIODIC VARIATION OF ATOMIC RADII
ISOELECTRONIC IONS OR SPECIES
These are ions of the different elements which have the same number of electrons but different magnitude of the nuclear charge. The size of isoelectronic ions decreases with the increase in the nuclear charge.

It is the amount of energy released when a gaseous atom accepts the electron to form gaseous anion .

Where, S, D, IE, EA and U are the heat of sublimation, bond dissociation energy, ionization energy, electron affinity and lattice energy respectively.

It is the tendency of an atom in a molecule to attract the bonded shared pair of electrons, towards itself

where IE and EA are expressed in electron volts
or

where IE and EA are expressed in kJ mol–1
or

where IE and EA are expressed in kcal mol–1

where XA and XB are electronegativities of the atoms A and B respectively while.

where EA–B, EA–A and EB–B represent bond dissociation energies of the bonds A-B, A-A and B-B respectively. The Pauling and the Mulliken scales are related to each other by the relation,

It may be defined as the volume occupied by one mole atoms of the element at its melting point in solid state.

ACID-BASE BEHAVIOUR OF OXIDES AND HYDROXIDES

The oxides or hydroxide of an element may act either as base or an acid depending upon its ionization energy.
CsOH > RbOH > KOH > NaOH > LiOH
HClO4 > HBrO4 > HIO4
Prev Online Test Series 2-NCERT Based – Atomic Structure
Next Online Test Series 1 -NEET & AIIMS Past Years based -Classification of Elements and Periodicity in Properties