They may be divided into two categories.

CLASSIFICATION BASED ON STRUCTURE

Polymers of propylene can be classified into

(Above polymers are obtained by coordination polymerisation)

CLASSIFICATION BASED UPON MODE OF SYNTHESIS

CLASSIFICATION ON THE BASIS OF PHYSICAL PROPERTIES AND INTERPARTICLE FORCES

They can be obtained by

Natural rubber is very sensitive to oxidation by air and ozone which can be inhibited by adding antioxidants. They undergo easy oxidation and prevent the oxidative degradation of rubber. eg.N-phenyl-

It is of two types

Where N1 number of molecules having molecular mass M1 and so on. It is measured by osmotic pressure measurement.

It is determined by ultracentrifugation or sedimentation.

It is resistant to light, atmospheric oxygen, chemically inert. It is used for electrical insulators, floor covering, safety helmets etc.

It is extremely tough, resistant to heat and chemicals. It is used for making gaskets, pump parts, coating utensils, high frequency insulator

It is hard used in preparing cloths, carpets

It is used for manufacture of tyres, floor tiles, gaskets, cable insulators etc.

It is resistant to heat and chemicals. It is used for making protective clothing, reaction vessels, floor tiles etc.

It is cis polyisoprene having length of repeat unit 8.1 Aº.

It is trans polyisoprene having length of repeat unit 4.72Aº.

It has high tenacity and elasticity. It is resistant to abrasion and not affected by sea water. It is used for reinforcement of rubber tyres, manufacture of parachute, safety belts, carpets and fabrics.
NYLON 6Homopolymer of Caprolactam (6C)

It is used for making brush bristles
KEVLAR
It is aromatic polyamide resembling nylons.

Ethylene glycol    Terephthalic acid              Terylene
It is resistant to mineral and organic acids. It is used for blending with wool to provide better crease, in safety helmets and aircraft battery boxes.
GLYPTAL OR ALKYD RESIN
Condensation polymers of dibasic acids and polyhydroxy alcohols

It is a cross linked copolymer. It is used for making good insulators, sheets, rods, switches, lacquers and adherent paints. 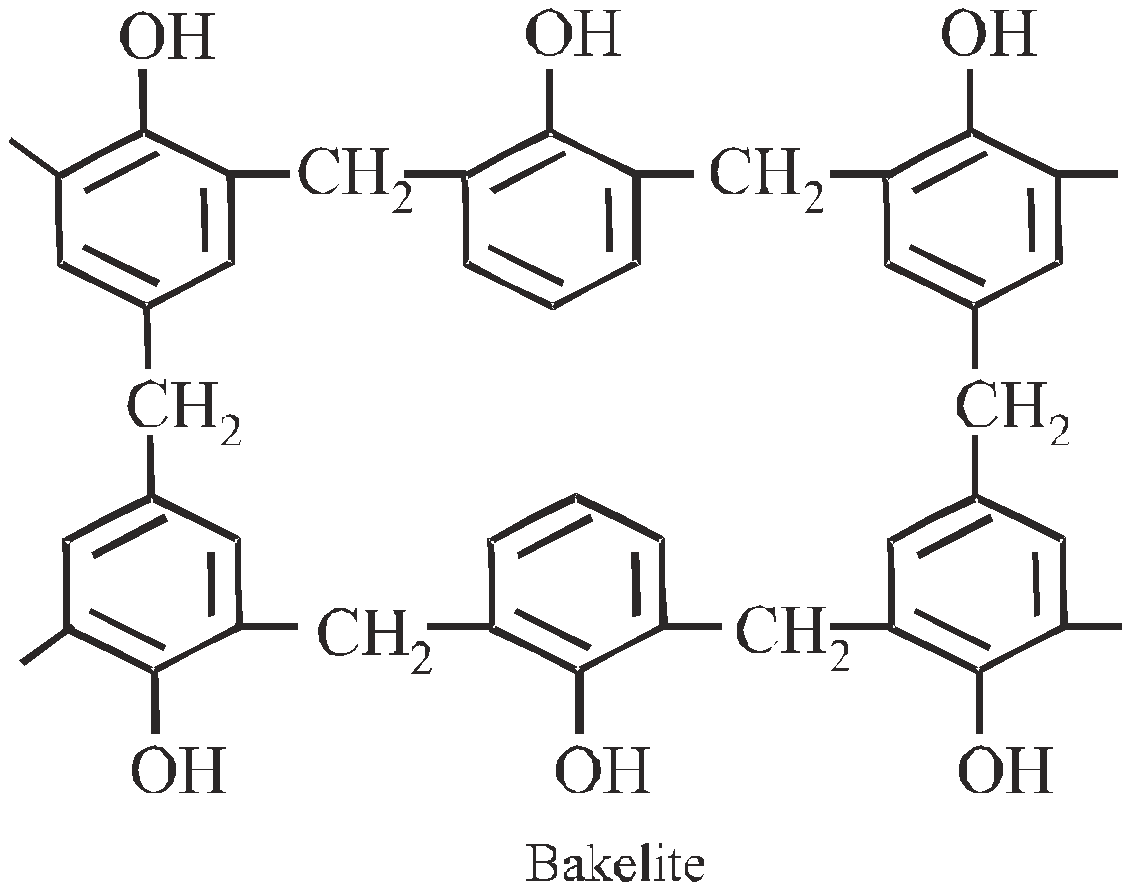 It is better than UF resin and used in making decorative laminates crockery under the trade name melmac, plywood industry as adhesive.
POLYURESTHANES
Polymers of diisocyanate and diol eg. : Perlon-U

It is substitute of leather. They are used as foams, films adhesives, gaskets etc.

where R = alkyl or phenyl radical
Silicones may be

Resin is a low molecular weight polymer used as binder, fusible and mouldable. It changes into infusible cross-linked form during moulding in presence of catalyst.

It is artificial silk. Actually the term includes all synthetic fibres manufactured from cellulose. The manufacturing can be carried out by