The  three important states of the matter are (i) Solid state (ii) Liquid state (iii) Gaseous state, which can exist together at  a particular temperature and pressure e.g. water has three states in equilibrium at 4.58 mm and 0.0098ºC.
PLASMA STATE : It is the gaseous mixture of electrons and positive ions existing at extremely high temperatures (in the interior of stars) or internal electrical fields in discharge tubes.
SINGLE SUPER ATOM STATE : At extremely low temperature, all atoms lose their identity and get condensed into a single entity behaving like a single super atom.

The volume of a given mass of a gas is inversely proportional to its pressure at constant temperature.

, a constant
Value of k depends on mass, temperature and nature of gas.
When mass and temperature are the same we have

ISOTHERMS
Graphs of V vs P or PV vs P at constant temperature are known as Isotherm.
Graphical representation of Boyle’s law

of its volume at 0°C for each degree rise or fall of temperature at constant pressure.

or
The volume of a given mass of a gas is directly proportional to the absolute temperature at constant pressure.

ABSOLUTE ZERO
If in the above equation we put the value of t as –273.15 ºC the volume of the gas will be zero. It means gas will not exist, which is not possible. In fact all gases get liquified before this temperature is reached. This hypothetical or imaginary temperature at which the gases occupy zero volume is called absolute zero.
ISOBARS
A graph of V vs T at constant pressure is known as Isobar.
GRAPHICAL REPRESENTATION OF CHARLE’S LAW

The pressure of a given mass, of gas increases or decreases by

of its pressure at 0°C for each degree rise or fall of temperature at constant volume.

The volume of a gas is directly proportional to number of molecules or moles at constant temperature and pressure.

at constant T and P
GRAPHICAL REPRESENTATION OF AVOGADRO’S LAW

The gas which obeys the equation  at every temperature and pressure range strictly.

, hence they are known as real or non ideal gases. Real gases behave ideally at low P and high T.

DENSITY OF A GAS

The above equation shows that density of a gas depends on P and T.
Unit of density of gas :
It is usually expressed in gm/ litre

It is the ratio under similar conditions of P and T 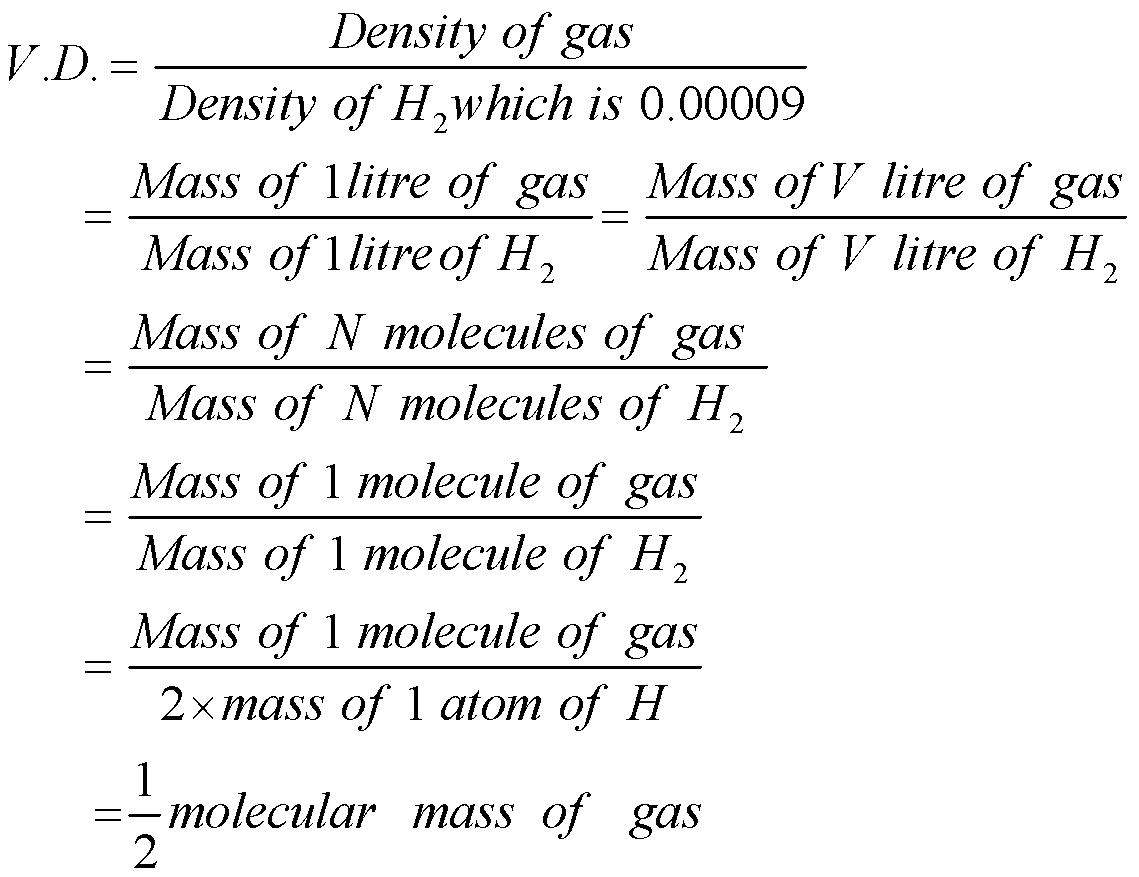 Unit of vapour density : It is a ratio and has no unit.
NATURE OF GAS CONSTANT, (R)

Deviation from ideal behaviour in terms of PV-P curve

NTP OR STP AND SATP

It is the gas constant  per molecule thus

At constant temperature the total pressure, exerted by a mixture of non reacting gases, is the sum of partial pressure of each gas

Partial pressure p of a gas = mole fraction of the gas ×  total pressure.
For a gas A,   pA = xA ×  P
If  n1,n2,and n3 are moles of non reacting gases filled in a vessel of volume V at temperature T.
The total pressure P is given by

This is the equation of state of a gaseous mixture.

It is the pressure exerted by water vapour at a particular temperature. It depends upon temperature.

PRESSURE OF A DRY GAS

The tendency of every gaseous substance to distribute itself uniformly throughout the available space is known as diffusion. It also takes place through a porous vessel.

The movement of a gas through a small hole when it is subjected to pressure is known as effusion.

GRAHAM’S LAW OF DIFFUSION  (OR EFFUSION)

are rates of diffusion of two gases and and their respective densities then,

If volume diffused is same

If time of diffusion is same

APPLICATIONS OF GRAHAM’S LAW OF DIFFUSION

The phenomenon of separation of a mixture of gases due to difference in their rates of diffusion is called atmolysis.

Postulates of kinetic theory of gases.

Based upon the postulates of Kinetic theory of gases, the kinetic gas equation is

where m = mass of a gas molecule, N= number of molecules, U= Root mean square velocity.

Kinetic Energy of translation of ideal gas is directly proportional to absolute temperature of gas or its pressure and is independent of the nature of gas.

The molecular velocity of a gas is proportional to square root of the absolute temperature. The molecular motion is called thermal motion of molecules.

CALCULATION OF MOLECULAR VELOCITIES OF GASES

It is given by the formula,

AT  NTP, P=dynes cm-2,  (molar volume)
It is given by the following formula,

;  In such case molecular volume (22400ml) is converted into the volume under given conditions of T and P using relation,

The molecules present in a given sample of gas move with different velocities in all possible directions. Velocities and directions of molecules keep on changing due to intermolecular collisions. Hence  it is impossible to find out the individual velocity of each molecule. It is however possible to predict fraction (

) of the total  number of molecules having specific velocities at a particular  temperature. As shown by the curve,
The gases show ideal behavior at low presence/large volume. Since the volume of molecules can be neglected and at high temperature since intermolecular forces decrease. 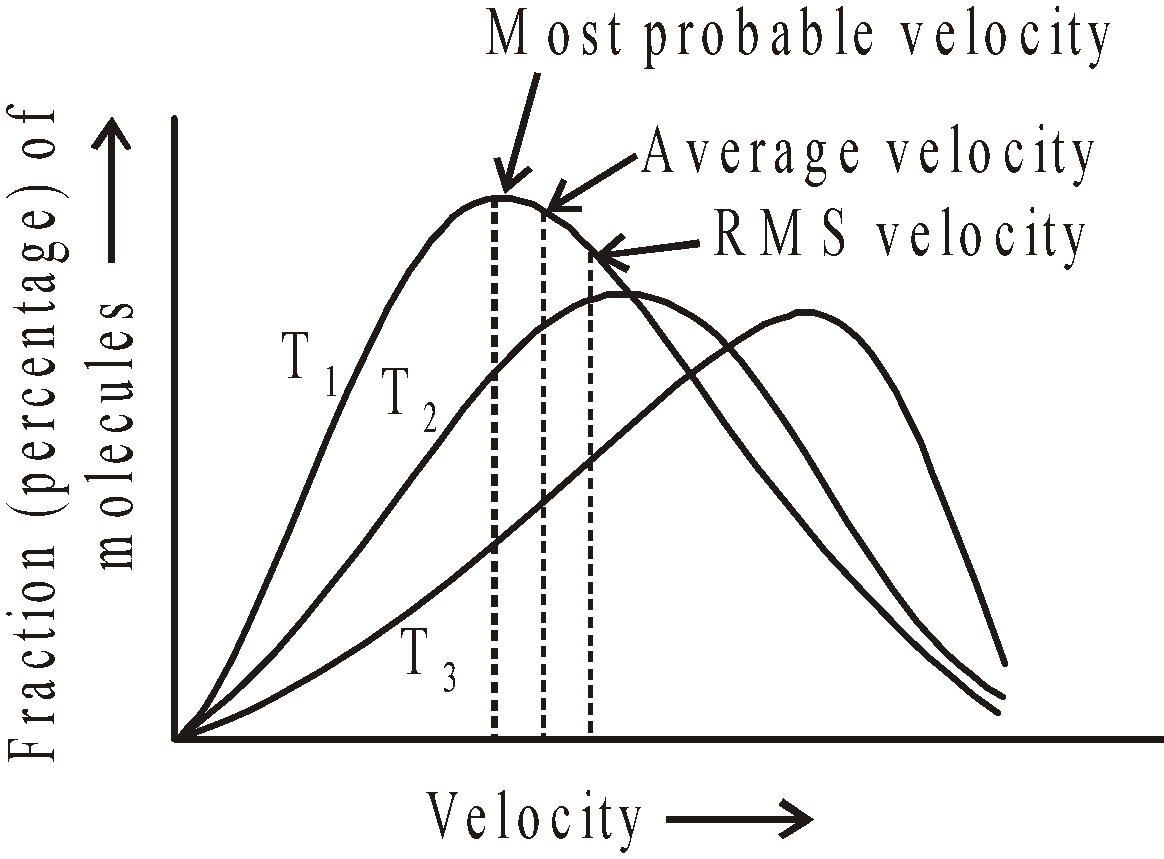 where c1,c2,c3 etc. are  individual velocities of n1,n2,n3 molecules.
Mathematically,

RELATIONSHIP BETWEEN DIFFERENT TYPES OF VELOCITIES :

Calculation of root mean square velocity (Urms) :   As already discussed, the Urms can be calculated by any of the following relations:
Urms =

Ratio of Urms for two  different gases at the same temperature

Ratio of Urms for the same gas at different temperature

EFFECT OF TEMPERATURE ON DISTRIBUTION OF MOLECULAR VELOCITIES

Most probable velocity increases with the rise in temperature but fraction of molecules possessing such velocity decreases.
Deviation from ideal behaviour of gas :
At  high pressure and low temperature the gases deviate considerably from the ideal behaviour. Deviation can be expressed in terms of compressibility factor (Z), expressed as

In case of ideal gas,

In case of real gas,

Temperature at which a real gas exhibits ideal  behaviour for considerable range of pressure is called Boyle’s temperature. Mathematically,

,   where a and b are Van der Waal’s constants

CAUSE OF DEVIATION FROM THE IDEAL BEHAVIOUR

It is due to two faulty assumptions of Kinetic theory of gases particularly not valid at high pressure and low temperature.

Van der Waal’s equation for one mole of gas

There is specific range of temperature and pressure, to apply the equation. It deviates at too high pressure and too low temperature.
Other equations of states :
Where c is a new constant

CRITICAL PHENOMENON AND LIQUEFACTION OF GASES

At critical temperature the pressure needed to liquefy a gas is known as critical pressure.

The volume occupied by one mole of a gas at critical temperature and critical pressure is known as critical volume.
Relationship between critical constants and van der Waal’s constant:

critical temperature.
Compressibility for 1 mole of gas at critical state:

When a gas under high pressure is allowed to expand adiabatically into a region of extremely low pressure, it suffers change of temperature. The phenomenon is known as Joule -Thomson effect.

In Joule -Thomson effect, cooling is observed only if the gas is present below certain temperature known as inversion temperature, Ti. It is characteristic of each gas and related to Van der Waal’s constant a and b  as,

(for an ideal gas) ;  This quantity is called internal pressure and is positive for real gases.
Thermodynamically an ideal gas may be defined by following the equations.

Or Joule Thomson Coefficient will be positive when

Or Joule Thomson Coefficient will be negative when

Or Joule Thomson Coefficient will be zero when

When the values of pressure, volume and temperature are expressed as fractions of the corresponding critical values we have.

RELATION BETWEEN CP AND CV

are for monoatomic gases like He, Ar etc. where the energy supplied increases translational kinetic energy only. In polyatomic gases heat supplied is utilised to increase vibrational and rotational energy also. Thus we have

= Average velocity,N = Number of molecules per unit volume of the gas

for all gases and hence

The total volume of a mixture of non reacting gases at constant temperature and pressure is equal to the sum of the individual partial volumes of the constituents
V(total)= V1+V2+V3+…..+Vn

ni= number of moles
Mi= molecular weight of each component

The decrease in the atmospheric pressure with increase in altitude given by the following expression is called barometric formula.
ln

Velocity required by an object to escape from the gravitational field of a body. It is given by

It is KE of a single molecule,

and , where k= Boltzmann constant

Most of the physical properties of liquids are controlled by the strength of intermolecular attractive forces existing between molecules of a liquid. These intermolecular forces arranged in order of their increasing strength are
London forces/induced dipole<dipole attraction< Hydrogen bonding

At equilibrium state the pressure exerted by vapour phase is called vapour pressure at a specific temperature.

where P1and P2 are the vapour pressures at temperature T1 and T2 ΔH is the heat of vapourisation and R is molar gas constant.