REASONS FOR THE FORMATION OF A CHEMICAL BOND

TYPES OF CHEMICAL BOND : (BY KOSSEL AND LEWIS)

Depending upon the mode of acquiring the stable electronic configuration, the chemical bonds may be

IONIC BOND (BY KOSSEL AND LEWIS)

KCl
The number of electrons lost or gained by an atom represent the electrovalency of the atom.

There are three main factors
Note: the size of the cation is always smaller than the atom from which it is derived

The formation of ionic compounds in terms of energy can be seen by Born Haber cycle eg. formation of NaCl is as follows

where   S =  Heat of sublimation of Na metal
I   =  Ionisation energy of Na
D  = Heat of dissociation of molecular chlorine
E  =  Electron affinity of chlorine atom
U  = Lattice energy of NaCl
The amount of heat liberated (Q) in the overall reaction is the heat of formation of NaCl.
Thus Q = S + I + 1/2 D – E  – U
(The negative sign indicates heat is evolved or liberated)
The important energy terms are I, E and U. The more the negative value of Q, the greater will be the stability of ionic compound. Hence formation of ionic compound is favoured by:-
In general the alkali metals have low values of ionisation energy and halogens have high values of electron affinity. Hence they form the stable ionic compounds.

It is generally represented by and also known as ionic potential charge density. It can be represented as

The important properties are as follows

COVALENT BOND :  (BY LEWIS AND LANGLEY)

According to G. N. Lewis atoms may also combine by sharing of electrons present in their outermost shells and attain noble gas electronic configuration. One shared pair of electrons constitute a single bond, two electron pairs constitute a double bond and so on. The bonds thus formed ore known as covalent bonds.

It is the number of electron pairs shared by one atom of the element in combination with other atoms in a molecule.

Generally the covalency of an element is equal to the total number of unpaired electrons in s– and p– orbitals of the valence shell. For example

covalency of oxygen = 2
The variable covalency is shown by elements having vacant d-orbitals in their valence shell. The unpairing of the s- and p- electrons is possible by promoting them to d- orbitals. For example
Ground state Covalency of sulphur = 2

A covalent bond is formed by the overlapping between two half filled atomic orbitals having electrons with opposite spin.
s – s > s – p > p – p 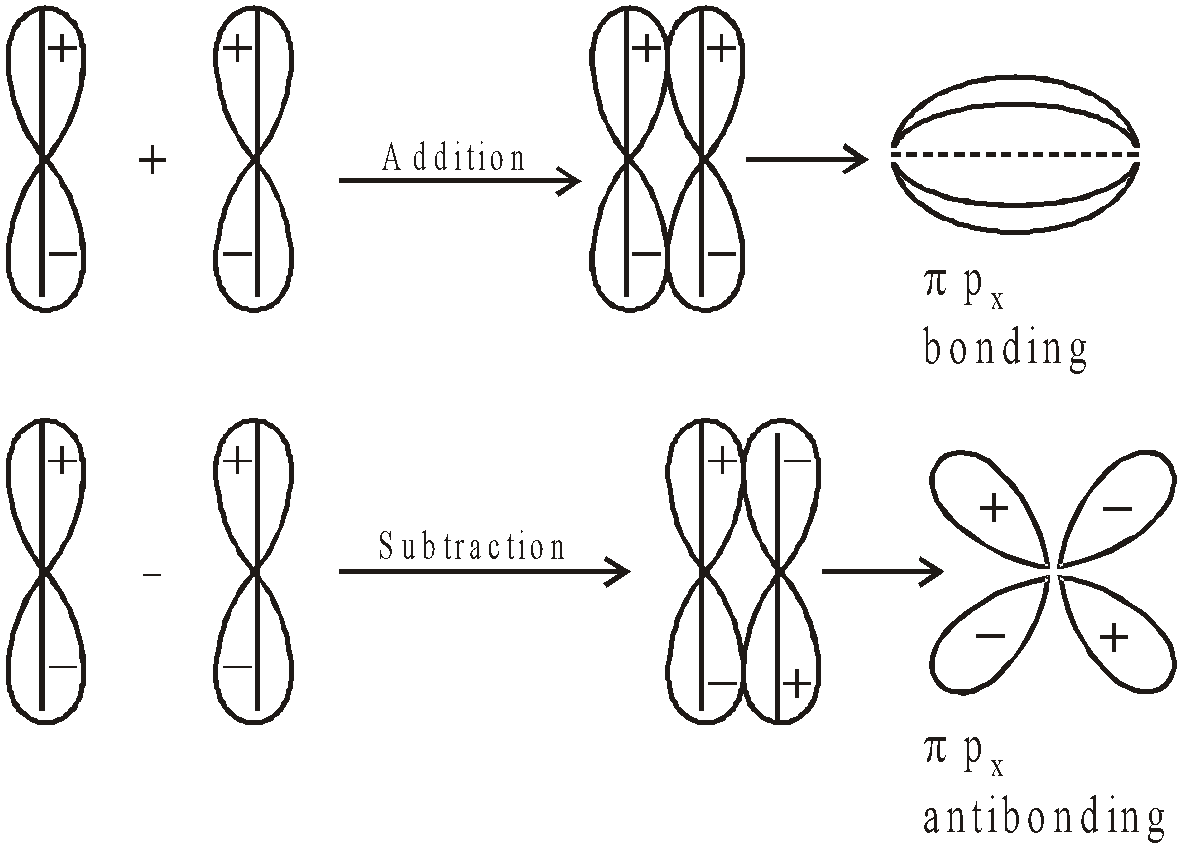 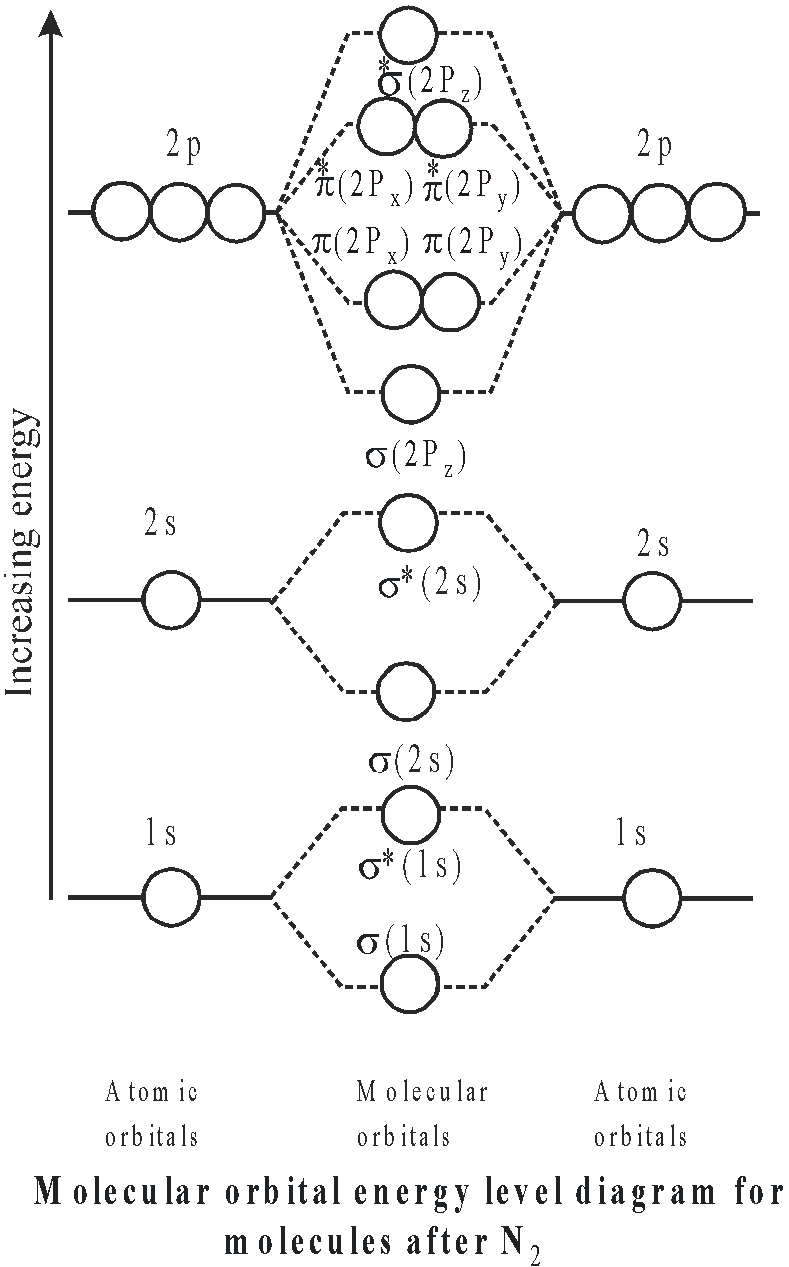 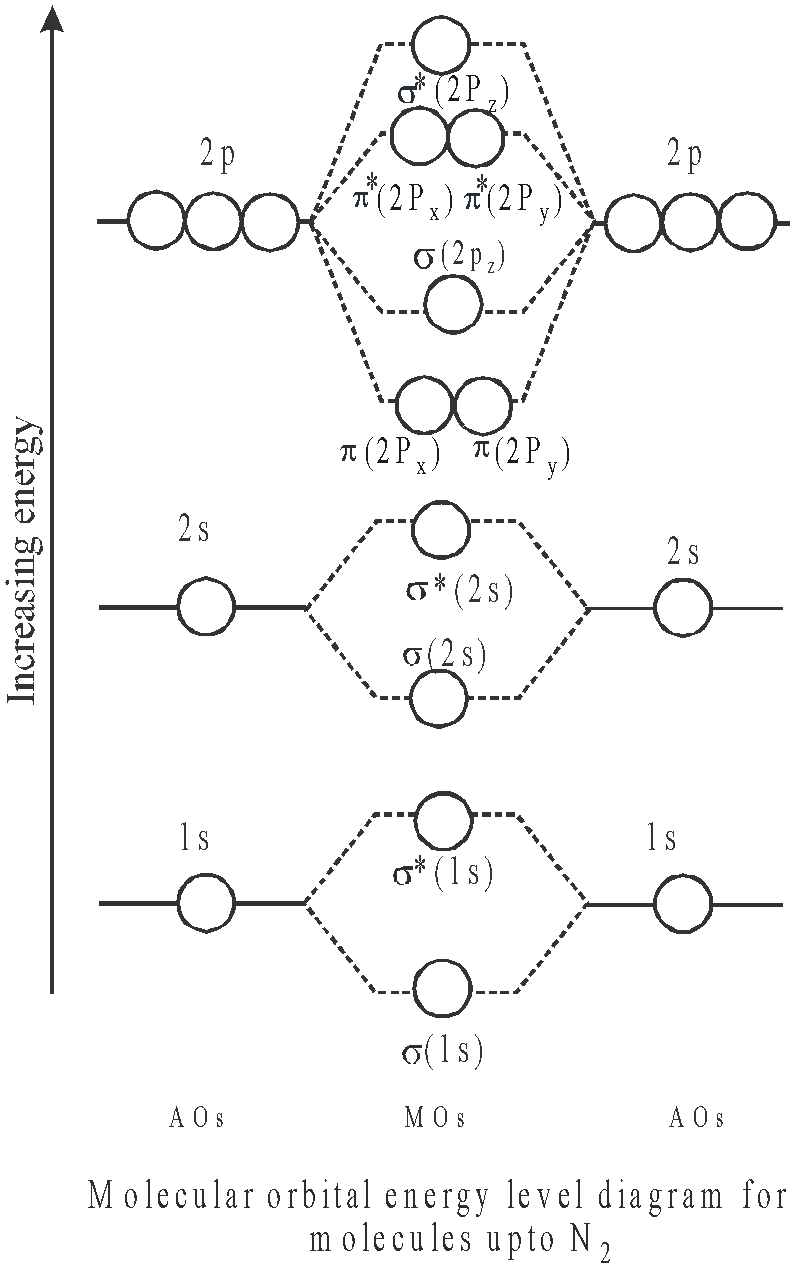 Simply we can write

BONDING IN SOME DIATOMIC MOLECULES AND IONS

Hence there is a single bond between two hydrogen atoms (H – H). Since there is no unpaired electron, H2 is diamagnetic
Bond order

As shown by electronic configuration the O2 molecule  contains two unpaired electrons, hence it is paramagnetic in nature
Bond order

It is diamagnetic
The electronic configuration  is

IONIC CHARACTER OF A COVALENT BOND

METHOD FOR FINDING THE TYPE OF HYBRIDISATION

Apply the following formula to find the hybridisation of central atom.

When both the electrons for sharing between two atoms are contributed by one atom only the bond formed is known as coordinate bond or dative bond.
In terms of orbital theory the coordinate covalent bond is formed by overlapping between empty and completely filled atomic orbitals.
The atom donating the pair of electrons is called donor and the atom which accepts the pair of electrons is called acceptor. The compounds containing coordinate bonds are known as coordination compounds. The bond is represented by an arrow (

) pointing head towards the acceptor.
Once the coordinate bond is formed it  is indistinguishable from a covalent bond. Examples

Hydrogen bond is purely electrostatic in nature. It is a weak bond, the strength of the strongest being about 5 – 10 kcal per mole. The more the electronegativity of atom involved in H – bonding, the more is the bond strength eg.

Hydrogen bond is of two types

When the H – bonding takes place within a single molecule this is known as intramolecular H – bonding. It also affects the physical and chemical properties of compound.

In meta and para isomer chelation is not possible due to the formation of desired size of ring. They therefore associate to some extent and have higher B.P

Enolic form is more volatile due to chelation

It has been found that metals have generally low ionisation energies indicating that valence electrons are weakly bound to the atomic kernel (or core).
Metals contain few valence electrons and valence orbitals which are empty. Thus valence electrons are completely delocalised and are frequently exchanged between atoms. The atoms thus acquire a positive charge and are arranged in a regular fashion (lattice structure).

The valence electrons form an “electron gas” or “sea of electrons”. The attractive interaction between the mobile electrons and a number of  ions constitutes a weak bond known as metallic bond.

Attractive forces between uncharged molecules are known as van der Waals forces. These forces may be divided into three groups

. The dipole dipole attractions in gaseous molecules are particularly small since the gas molecules are in continuous motion. This attraction increases the m.pt. and b.pt. of substances and makes their liquefaction easy.

If a covalent bond is formed between two dissimilar atoms, eg. A and B, one of the atoms (A or B) must be more electronegative than the other. If A is more electronegative than the shared pair of electrons is drawn near A leaving a positive charge on B and hence making the molecule dipolar (A–B+). The percentage of polar character is given in terms of dipole moment (

).
The dipole moment is defined as the product of electric charge q and the distance r between the two atoms of a polar molecule. (

= e × d) Dipole moment is a vector quantity with direction same as that of the line joining positive and negative centres.
Thus molecules having dipole moment (

= 0) are called non polar molecules and molecules with

For e.g. experimental dipole moment for HCl is 1.03  and

It is the distance between the nuclei of two atoms between which the bond is formed. Other names for bond length are interatomic distance or bond distance. It is usually expressed in angstrom unit (1Å=10-10m). Pauling’s rule states that for covalently bonded atoms, bond length is sum of covalent radii. Thus for a covalent compound AB, the bond length is rA + rB. where rA and rB are covalent radii of A and B

Bond energy is determined by thermochemical methods by determining either the heat of atomisation i.e. heat required to break the molecule into its atoms or by the heat of formation of compound.

Bond angle is the angle between two adjacent bonds in a molecule.

During formation of a covalent bond, the atoms attain an inert gas electronic configuration (ns2p6 configuration). This is known as Octet rule.

EXPLANATION FOR THE FAILURE OF OCTET RULE

The concepts given below explain the failure of the octet rule :