This is in accordance with the bond length, longer the H – X bond, weaker it will be.

Markownikoff’s rule
When an unsymmetrical alkene or alkyne reacts with unsymmetrical reagent, then negative part of reagent attach with that carbon atom which contains lesser number of hydrogen atom during the addition. For example:

Alkyl fluorides have lowest boiling point of all the alkyl halides, hence can be removed by distillation.
Swarts reaction
Alkyl chloride/bromide is heated in presence of a metallic fluoride such as AgF, Hg2F2, CoF2 or SbF3
CH3–Br + AgF

Nucleophilic substitution reactions occur either by SN1 or SN2  mechanism. 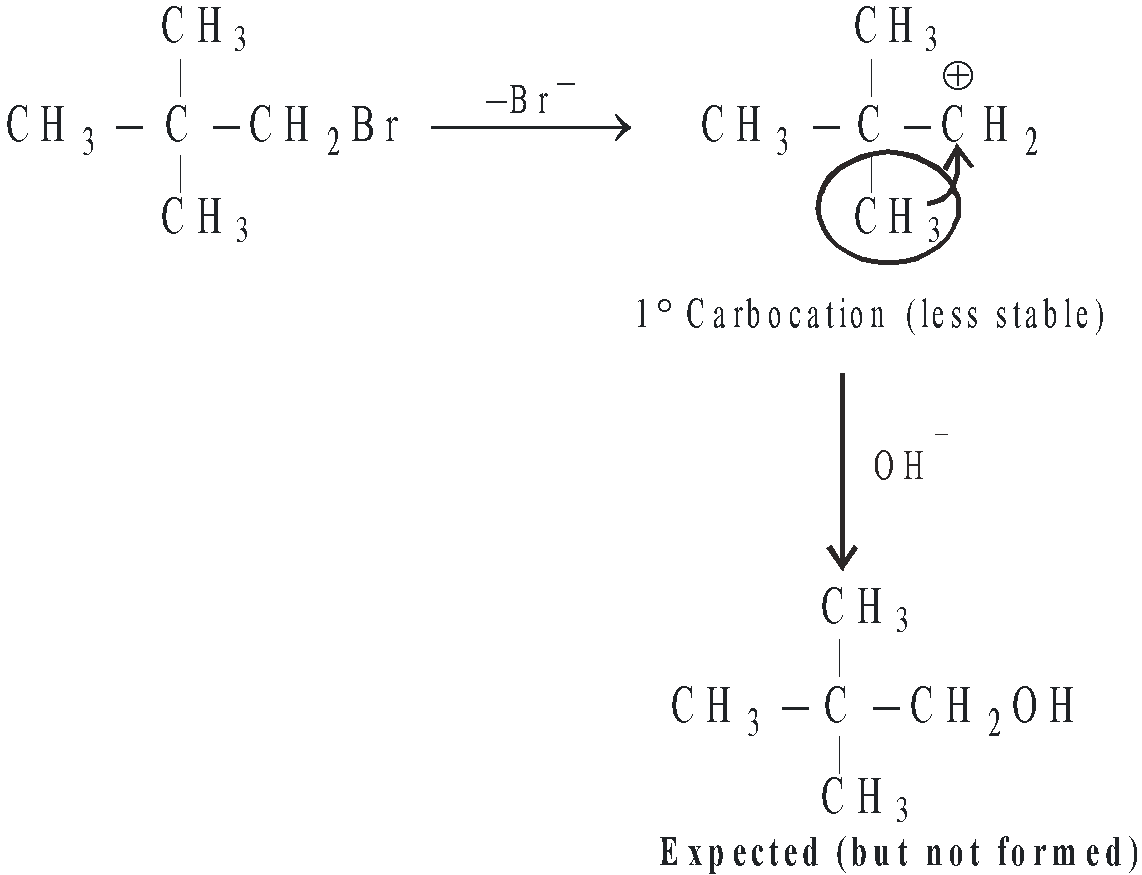 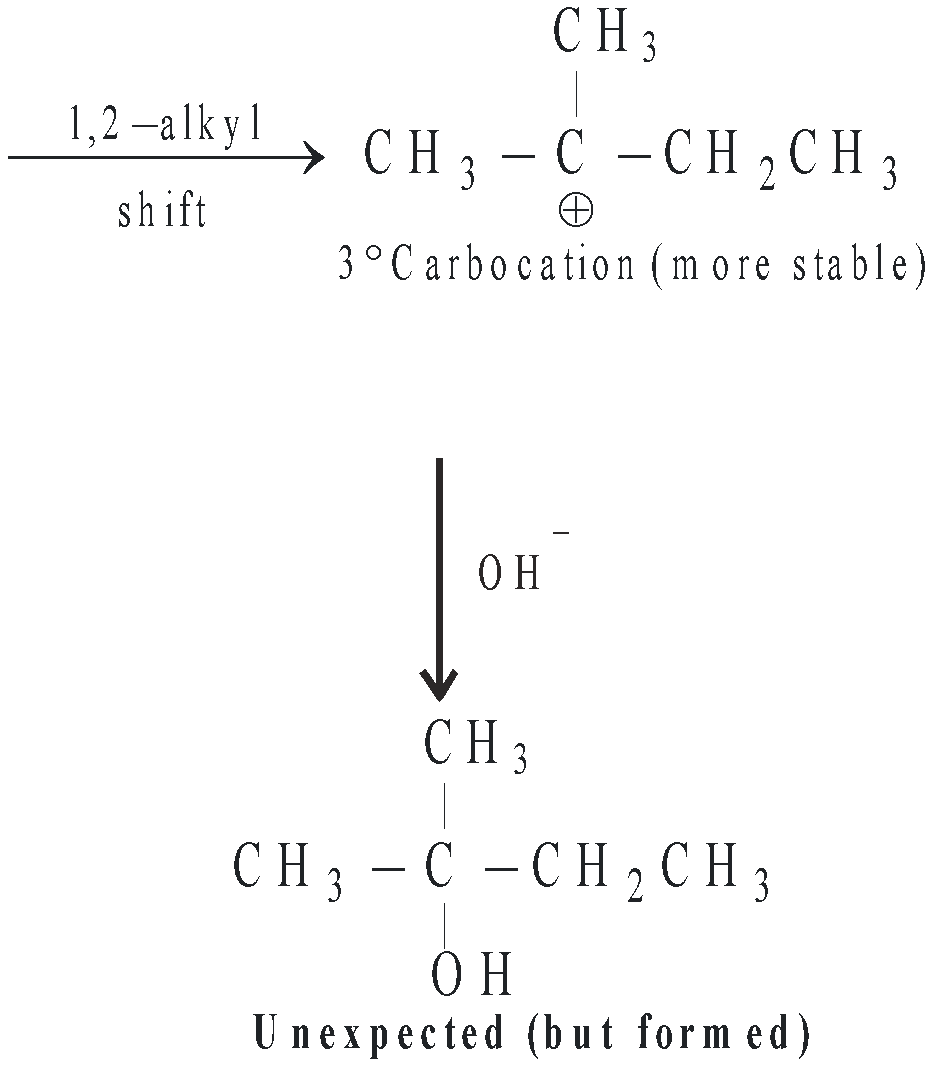 However, remember that the departing halide shields to some extent, the frontal attack of the carbocation, racemization is only partial and the inverted configuration predominates.

Remember that the nucleophile attacks from the back side of the halide ion, bulkier the alkyl group present on the carbon bearing halogen lesser will be its tendency to undergo SN2 reaction. Thus the reactivity of alkyl halides towards SN2 mechanism is

Since the nucleophile attacks from the back side and the halide ion leaves from the front side, the product obtained will have an inverted configuration [Walden inversion]. This implies that if the alkyl halide is optically active, the product will also be optically active, although the sign of rotation may be same or different. All primary alkyl halides undergo substitution via SN2 pathway.
Remember

(Wurtz reaction)
Tetraethyl lead, commonly known as TEL, is used as an anti-knocking agent in petrol. 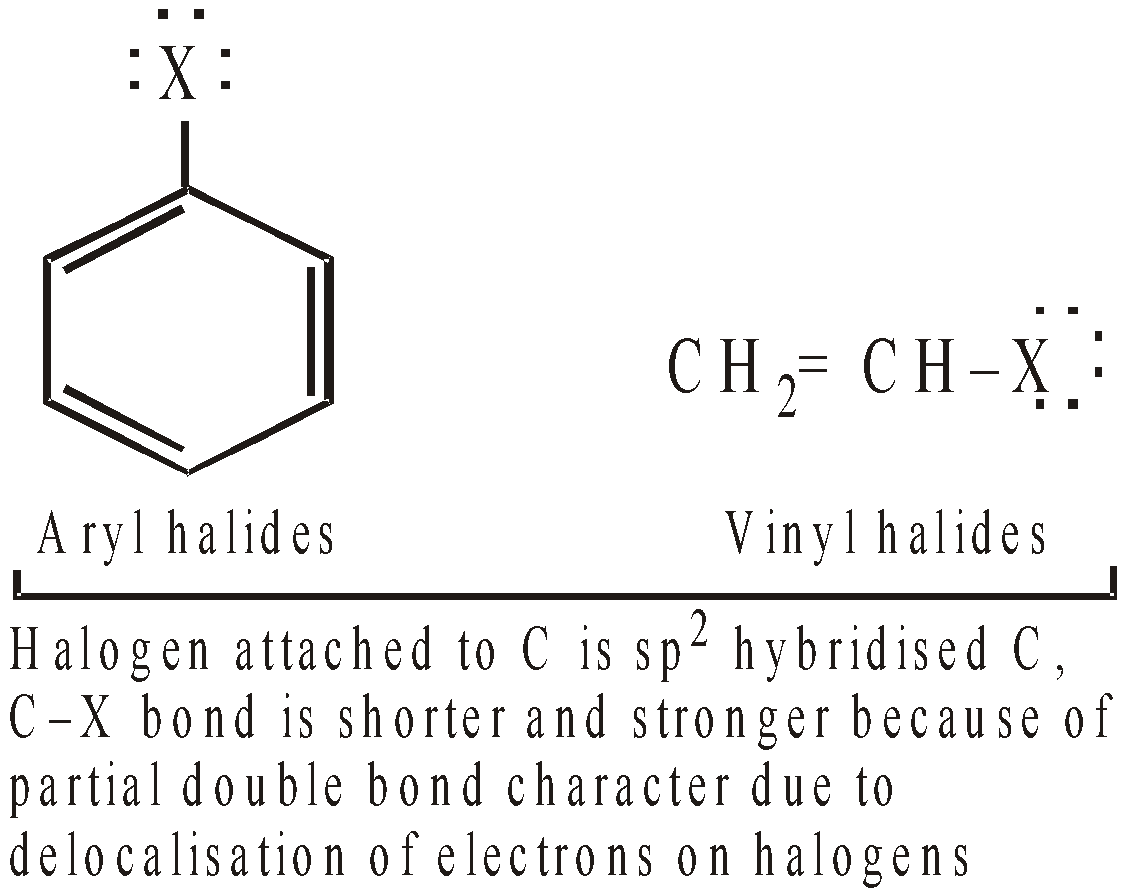 Fluorination  is difficult to control, while iodination is too slow to be useful. Moreover, iodination being reversible (because of reducing character of HI), the reaction requires the use of an oxidising agent like HNO3, HIO3, HgO etc.

Introduction of second –Cl is difficult as compared to first, because of electron withdrawing character of chlorine (deactivating nature of halogens).
Nuclear halogenation is an electrophilic substitution reaction.
Side chain halogenation :
Halogenation of higher arenes, i.e. other than benzene, in presence of light or heat and in the absence of a halogen carrier introduces halogen in the side chain.

Remember halogenation of toluene at low temperature, in the absence of light and in presence of catalyst, gives nuclear substituted products.

When CuCl/HCl or CuBr/HBr is used, the reaction is called Sandmeyer reaction. It is the halogen attached to cuprous halide which enters the ring.
When Cu/HCl or Cu/HBr is used, the reaction is called Gattermann reaction.
Thermal decomposition of benzenediazonium tetrafluoroborate to give fluorobenzene is called Balz-Schiemann reaction.
This method for preparing aryl halides is more important than direct halogenation of arenes in two respects.

Similar is the case of allyl carbocation formed from allyl halides.

Remember that the electron-withdrawing groups activate chlorine of chlorobenzene towards nucleophilic substitution, they deactivate the benzene nucleus towards electrophilic substitution.
The unusually high reactivity of aryl fluorides (although having a strong C – F bond) is due to very high electronegativity of fluorine due to which it stabilises the carbanion, formed as intermediate during the reaction, most easily.

Note that introduction of –NO2 group in p– and o– positions make the substitution of –Cl by –OH easier as it is evident by increased mild conditions.

Benzyl chloride undergoes all the above reactions under mild conditions

where * indicates isotopically labelled carbon, i.e. C-14.
Benzyl chloride does not form benzyne intermediate.
Remember triple bond of benzyne is different from the triple bond of alkynes, in benzyne one of the p bonds is formed by p–p overlap while the other by sp2–sp2 overlap.

However, unlike CH3Cl, chlorobenzene does not undergo Friedel-Craft reaction with benzene. This is because of instability of C6H5+ cation.
Benzyl chloride also undergoes electrophilic substitution easily and mainly in the o- and p-positions. However, here percentage of m- too is significant (10-15%) as compared to that in toluene. Formation of m-isomer is due to the presence of Cl as   Cl which decreases the electron-releasing power of the parent methyl group due to its electron withdrawing nature. Thus we can explain the increased percentage of the m-isomer with the increase in number of Cl atoms in the –CH3 group.

Benzyl chloride undergoes all the above reactions forming

CONDENSATION WITH CHLORAL TO FORM DDT

DDT is non-biodegradable and slowly loses a molecule of HCl to form another compound p,p’–dichloro-diphenyldichloroethene (DDE) which hinders with the egg shell formation of birds with the result eggs break off before hatching.

OXIDATION OF THE SIDE CHAIN

Cl2, so obtained acts as a mild oxidising as well as chlorinating agent

To avoid this oxidation chloroform is always stored in dark coloured bottles filled to the brim to exclude any air. Further nearly 1% alcohol is also added to destroy traces of phosgene, if formed, to harmless diethyl carbonate.

Alkyl carbylamines or alkyl isocyanides have extremely bad smell, hence this reaction is used for detecting the presence of a primary amine.

Chloretone is used as a hypnotic (sleep producing substance).

Iodoform is prepared by heating ethanol or acetone with NaOH or Na2CO3.

Thus iodoform reaction is used for detecting CH3CO– or CH3CH(OH)– group in an organic compound. Hence iodoform test can be used for distinguishing between
Compound marked with asterisk * responds iodoform test.

When all hydrogen atoms of a hydrocarbon are replaced by corresponding number of halogens, halogen derivative is known as perhalohydrocarbon. Perchloroethane, C2Cl6 is a solid and known as artificial camphor, it is used as moth repellents.

Freon is a widely used as refrigerant and propellant in aerosols and foams. However, freons destruct ozone layer in the atmosphere.

Due to non-availability of d-orbital in C, CCl4 resists hydrolysis with boiling water.

PVC is a plastic of great importance.

It can best be prepared by allylic chlorination of propene with chlorine at about 673K (a free radical substitution).

It is best prepared by allylic bromination using N-bromosuccinimide (NBS) in presence of sunlight (a free radical substitution).

1,2-Dichloroethene exists in two geometrical isomeric forms, i.e. cis- and trans-.
It is used as a solvent.
1,1-dichloroethene (vinylidene dichloride)

1,1-Dichloroethene does not show cis, trans-isomerism. It is used in the manufacture of saran wrap used for food packaging.