Notes and Study Materials -Some Basic Concepts of Chemistry

The 11th general conference of weights and measures in 1960 recommended the use of international system of units. Abbreviated as SI Units (after the French expression La System International de units).

The SI system has seven basic units of physical quantities as follows:

The units obtained by combination of basic units are known as derived units e.g. velocity is expressed as distance/time. Hence unit is m/s or ms–1. Some common derived units are:

SOME NON-SI UNITS IN COMMON USE

Precision : It is the closeness of various measurements for the same quantity.
Accuracy : It is the agreement of a particular value to the true value.
Example : Let the true weight of a substance be 3.00g. The measurement reported by three students are as follows

Stoichiometry : It is calculation of masses or volumes of reactants and products involved in a chemically balanced reaction. Consider the formation of ammonia.
N2 (g) + 3H2 (g)

2NH3(g)
All are gases indicated by letter (g) and coefficients 3 for H2 and 2 for NH3 are called stoichiometric coefficients. The formation of ammonia can be interpreted in many ways:

The weight 7.52 gm of a substance indicates that it is reliable to the nearest hundredth of a gram and may be expressed as 7.52 ± 0.01. It means slightest variation may occur at the second place of decimal or we can say that uncertainty  is ± 0.01 g.
Now consider the weight 6.4234 g. It may correctly be expressed as 6.4234 ± 0.001 g.
In the first case the weight contains three significant figures and in the second case weight contains five significant figures.

Anything which occupies space, possesses mass and can be felt is called matter. 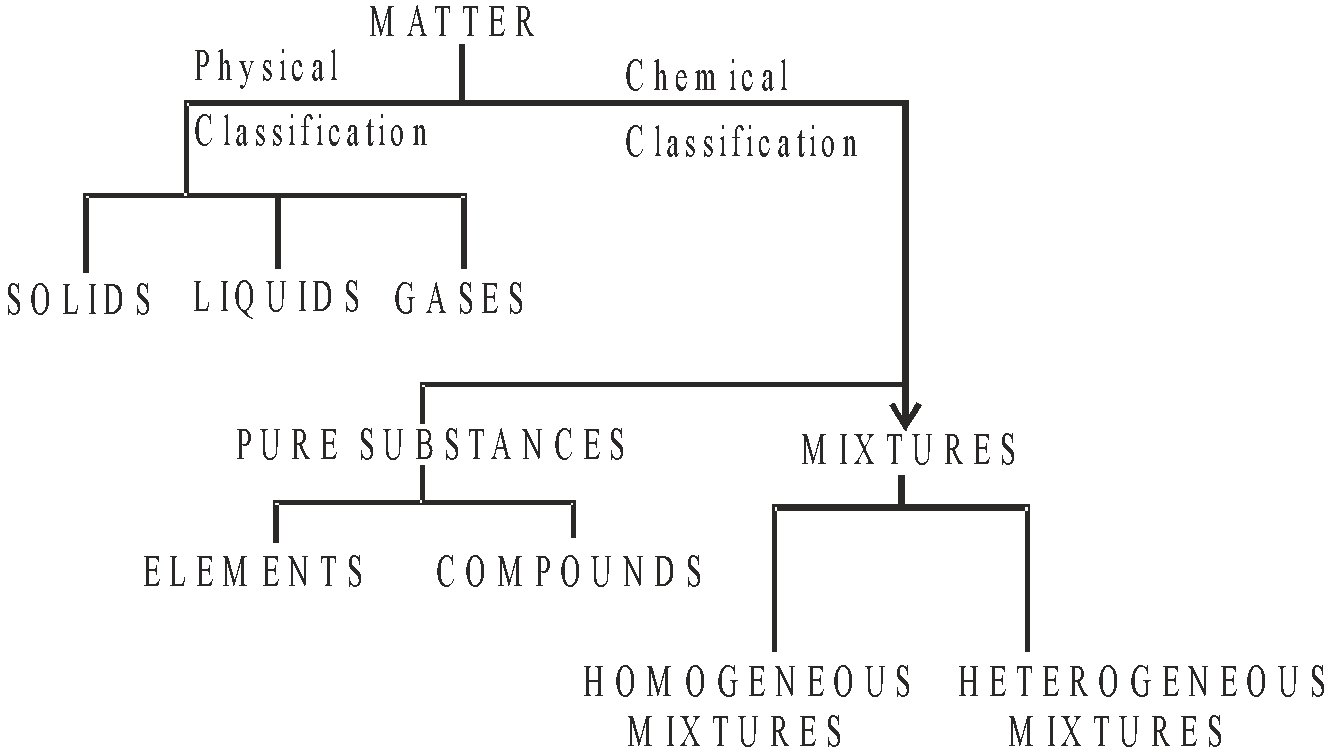 Pure substance consisting of one type of particles in the form of atoms eg. Cu, Na, Fe or molecules eg. H2, O2 etc.

Mixtures are substances made of two or more elements or compounds in any proportion. They may be homogeneous or heterogeneous.

Mixtures can be separated into constituents by following methods:

Drawbacks of Dalton’s theory :
It states that “equal volumes of all gases, under similar conditions of temperature and pressure contain equal number of molecules”. Applications are:

Atom is the smallest particle of element which might not be able to exist independently.

Molecule is the smallest particle of the substance which can exist independently. It can be subdivided as

It is the unit of representing atomic masses. 1 a.m.u. =

It is the mass of each isotope determined separately and then combined in ratio of their occurrence. Suppose a and b are two isotopes of an element with their occurence ratio p : q then
Average atomic mass =

Is the mass of an atom expressed in gms.
No. of Gm-atoms of element =

It is the average relative mass of the molecule as compared with mass of C-12 atom.
Molecular mass =

It is obtained by adding atomic masses of various atoms present in the formula and this term replaces molecular mass in ionic compounds.

It is the number of OH– ions that can be displaced from one molecule of a substance.

It is the number of H+ ions that can be displaced from one molecule of a substance.

where E is the eqv. mass of the metal.
GEM = Electrochemical equivalent × 96500
and ratio of weights deposited by equal amount of electricity is in ratio of their equivalent masses.
Equivalent mass of metal =

Equivalent mass of acid (base)
=

It is the equation representing chemical change in terms of formula of reactants and products.

It is the simplest formula of a compound giving simplest whole number ratio of atoms present in one molecule. e.g. CH is empirical formula of benzene.

It is a homogenous mixture of two or more substances. The component of solution having larger proportion is solvent and others are solute.

It is the ratio of moles of a constituent to the total number of moles in a solution.
Let A be solute & B is solvent then mole fraction of solute (xA)
=

, where n is the number of moles.
Mole fraction of solution

It is the number of gram equivalents of a solute present in one litre of solution.

Normality depends on temperature. Also if strength is given in normalities, N1 of A & N2 of B
Then N1V1 = N2V2.

It is the number of moles of solute present in one litre of solution.

and millimoles = M × V(in ml).
Molarity and mass percentage have the relation M

, where d = density
If a solution of molarity M1 and volume V1 adds up with a solvent to a final volume V2, then molarity M2 is given by

If two different solutions (M1, V1) and (M2, V2) are mixed then molarity of resulting solution is
M =

It is the number of moles of solute in 1 kg of solvent.
Molality (m) =

Molality is independent of temperature.

It is the number of gram formula mass of ionic solute dissolved in 1 litre of solution.
Formality =

It is the reactant which is completely consumed during the reaction.
Next Online Test Series 1 -NEET & AIIMS Past Years based -Some Basic Concepts of Chemistry