Deals with rate, mechanism and factors affecting the chemical reactions.

The negative sign in the expression make the rate positive.
Hence rate of a reaction is never negative.
Consider the decomposition of N2O5

Instantaneous rate of a reaction 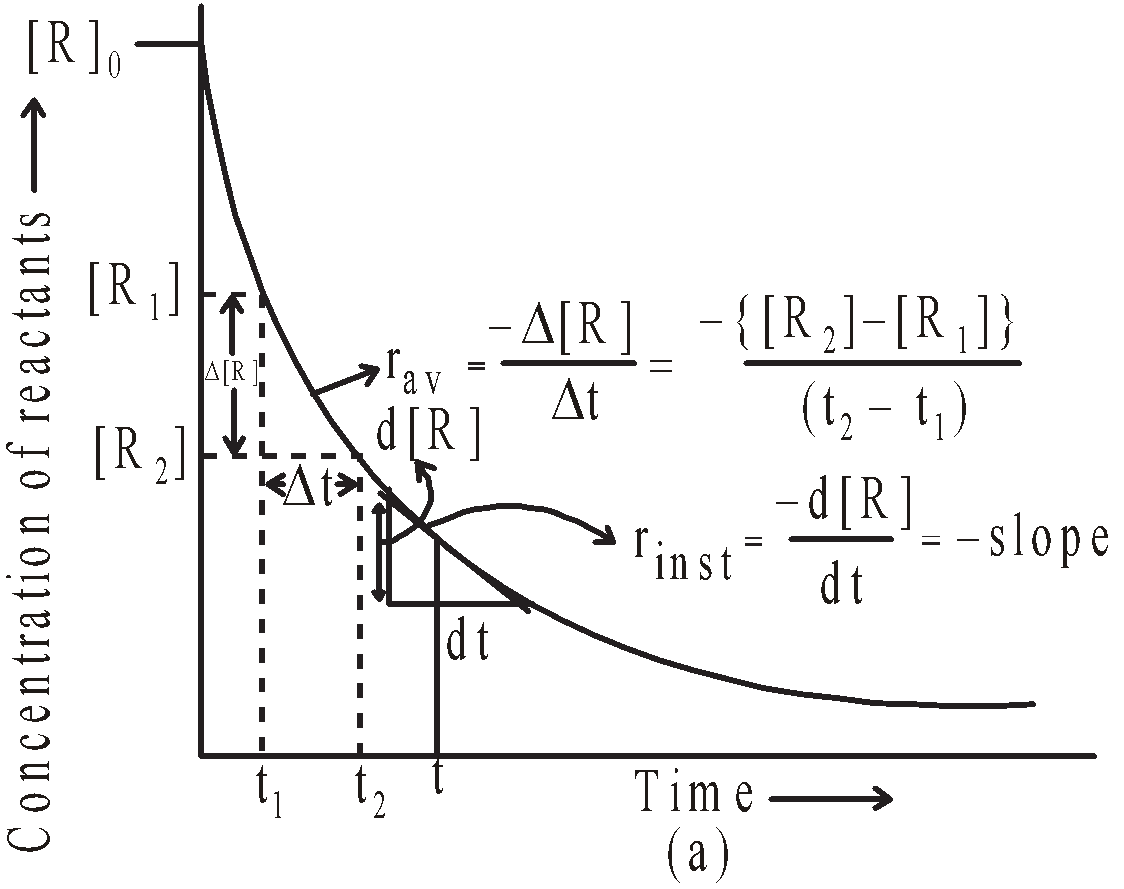 Average rate of a reaction 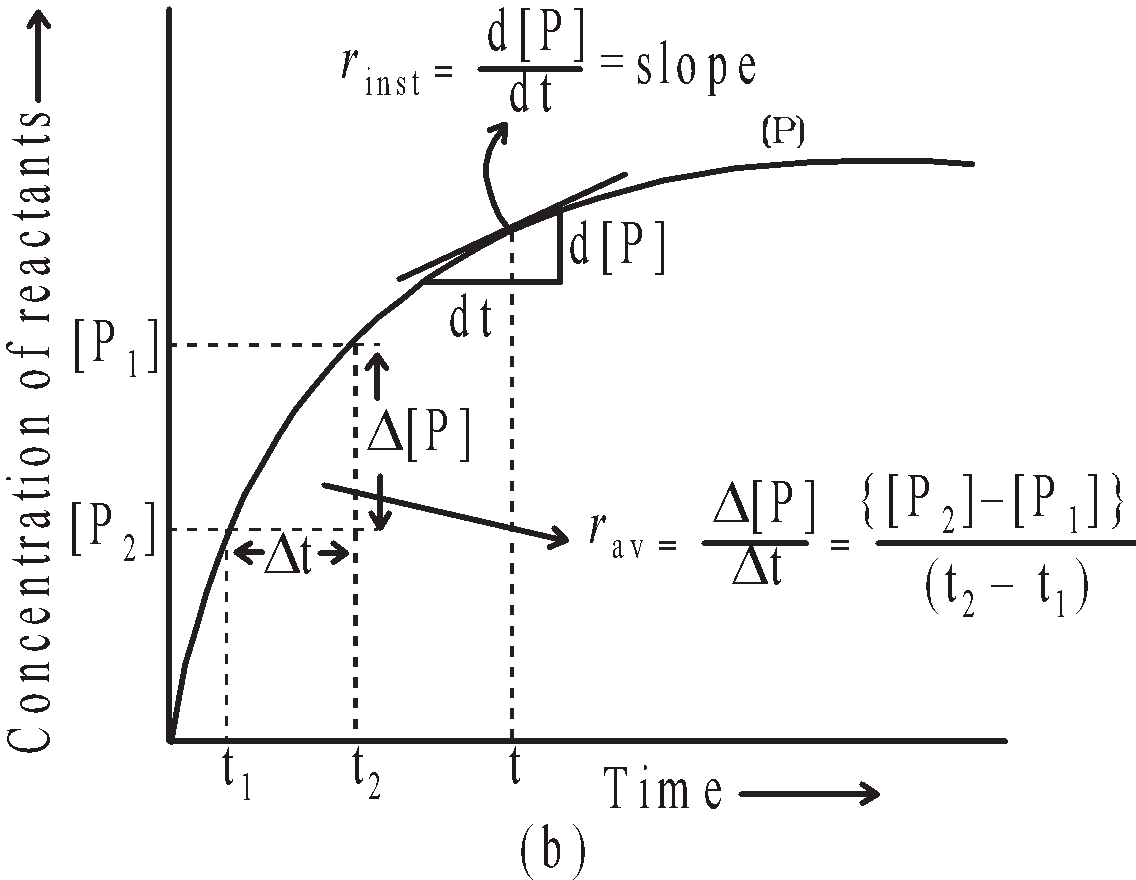 FEATURES OF THE RATE OF REACTION

UNITS OF RATE OF REACTION

RELATION BETWEEN AVERAGE AND INSTANTANEOUS RATE

FACTORS AFFECTING THE RATE OF REACTION

Consider a reaction A + B

Products
At a particular temperature rate is given by

where k is rate constant, velocity constant or specific reaction rate.
When CA = CB = 1 then k= r (rate)
In general rate constant may be defined as the rate of the reaction when the concentration of each of the reactants is unity. It is characteristic of a particular reaction.

Variation of rate constant with temperature is given by
Arrhenius equation : k =

(i)
A = Constant known as frequency factor
Ea = Energy of activation. Both A and Ea are characteristic of a particular reaction.

= known as Boltzmann factor
Taking natural logarithm of (i)
lnk =

(ii)
The plot of lnk

Knowing the value of slope Ea can be calculated.

DIFFERENCE BETWEEN RATE CONSTANT AND RATE OF REACTION 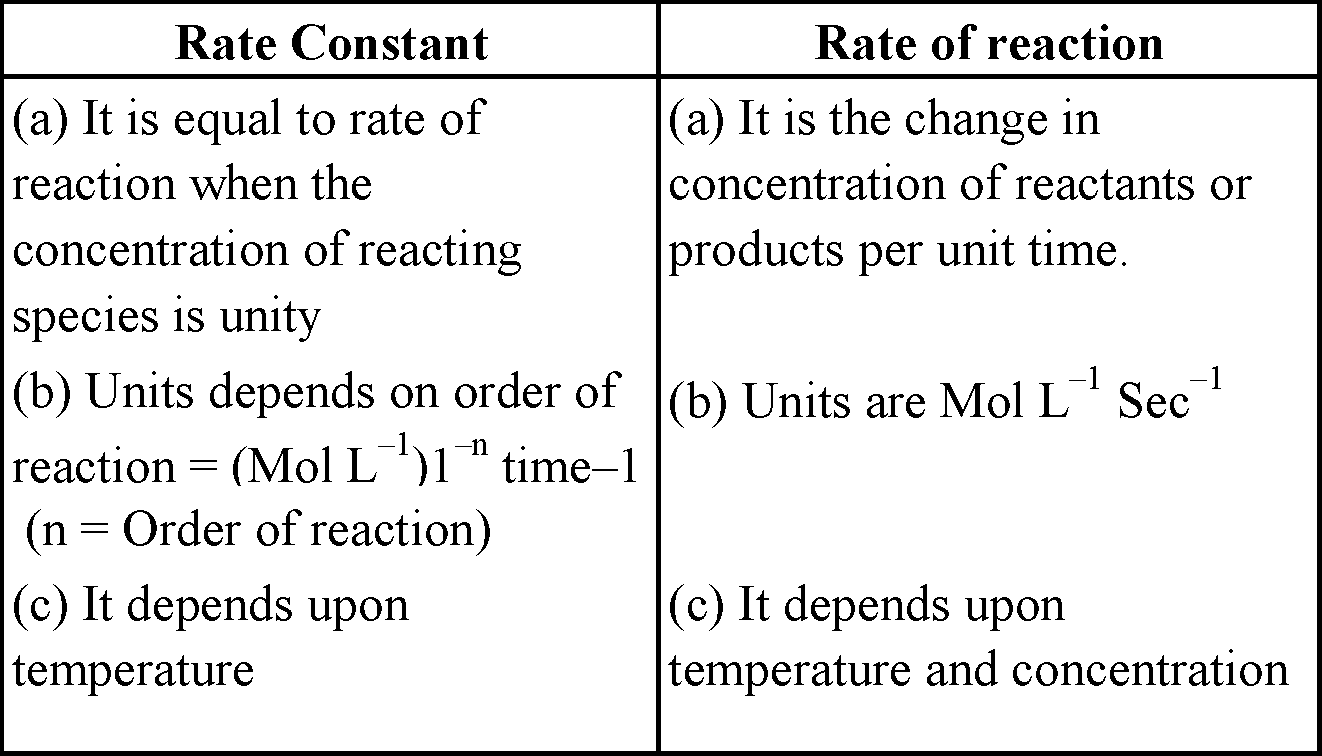 It is the ratio of two rate constants differing by a temperature of 10 °C. Generally the temperatures are 298K & 308 K.
Temperature Coefficient =

The value of temperature coefficient is generally 2 and 3. In rare cases the value is 4, 5 etc.

The mathematical expression, which practically relates the rate of a chemical reaction and concentration of reactants is called rate law equation e.g. for a hypothetical reaction.
aA + bB

[A]x [B]y    It is rate law.
If rate actually vary according to this equation practically then this is rate law equation. For decomposition of N2O5.
2N2O5

Rate of formation of

Rate of formation of

The sum of all the powers to which the concentration terms are raised in rate law equation is known as the order of a reaction. For a general reaction

The rate law equation is

FEATURES OF ORDER OF REACTION

Some reactions take place in more than one step. Each step has its own rate. The slowest step is called the rate determining step or rate controlling step e.g.

First step is the rate determining step.
The rate law equation is always written from slow step.
∴ The rate law is given as

The number of molecules of reactants which take part in a single actual step of the reaction, whether their concentration is appreciably changed or not is known as molecularity of reaction. Molecularity is a theoretical concept and is always a whole number.

Trimolecular
The reactions with molecularity more than 3 are rare and generally not possible. Such reactions proceed through more than one steps and are termed as complex reactions. Each step has its own molecularity e.g.

Reactions like hydrolysis of an ester or cane sugar, which though bimolecular and yet following the kinetics of first order are called pseudo unimolecular reactions.

In above reactions the rate is independent of concentration of H2O being present in excess. Hence [H2O] is constant.

The reaction rate is determined by one concentration variable term.
A

This is called the kinetic equation of a first order reaction.
Units of k = time–1 eg h–1, m–1 or s–1
Half-life period (t1/2) : The time taken for the completion of half of the reaction is known as half-life period. When

The reaction rate is determined by the variation of two concentration terms. They are of two types
(a)

The reaction rate is determined by the variation of three concentration terms. They are of three types
(a)

The reaction rate is independent of the concentration of the reactants.

Note : The time taken for the completion of half of the reaction is directly proportional to the initial concentration of reactants.
For zero order reaction,

When the order of reaction is n, t1/2 is given by

DETERMINATION OF ORDER OF REACTION

where n is order of reaction
The following graphs are obtained between t1/2 and initial concentration ‘a’.
I. 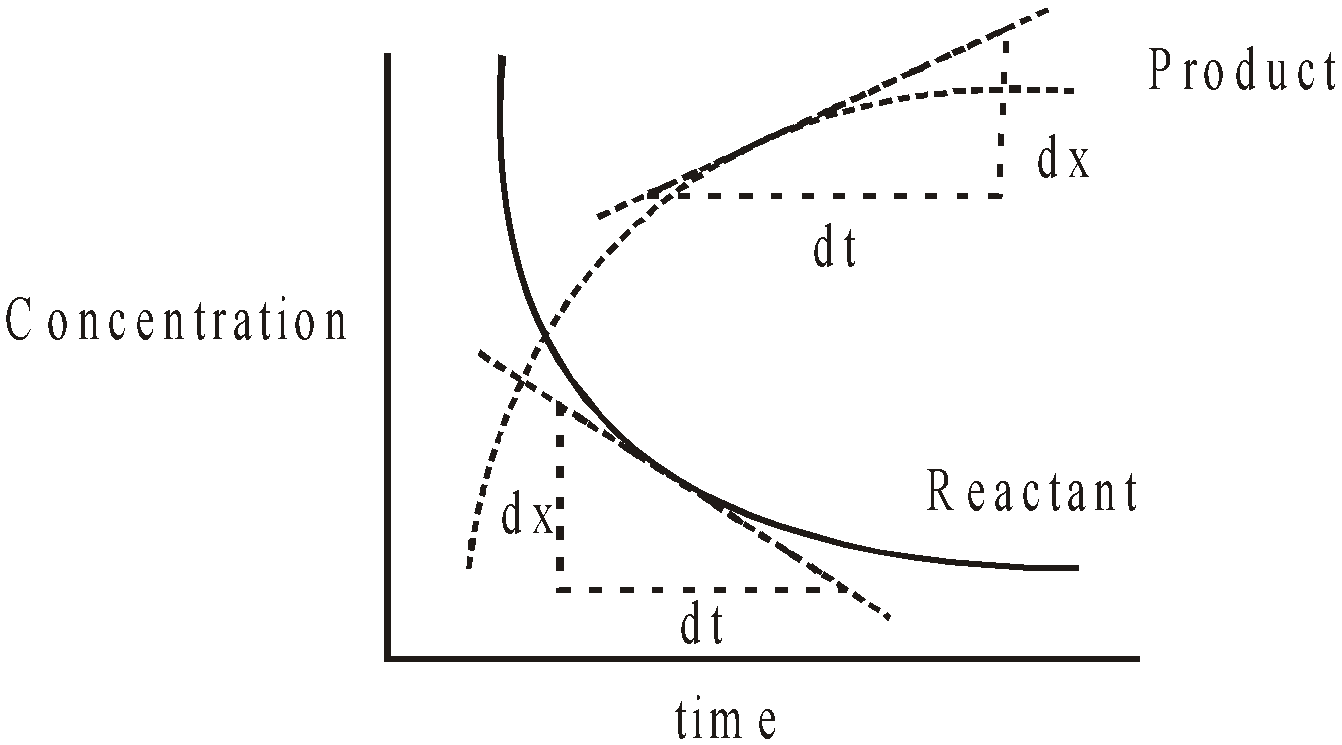 The new graphs between

(b) Making use of integrated form of rate expression

For I order slope =

;  k can be calculated
For II order slope =

; k can be calculated
For III order slope =

; k can be calculated

EXAMPLES OF REACTIONS OF DIFFERENT ORDER

Chemical reaction occurs as a result of effective collisions between reacting molecules. For this two things are important.

The minimum amount of energy possessed by the reacting molecules to have effective collisions, resulting in the formation of product, is called threshold energy.

Total number of collisions which occur among the reacting molecules per second per unit volume is called collision frequency. Its value is given by
z  =

RATE OF REACTION FROM COLLISION THEORY

It is given by
Rate of reaction  = f × z
z = collision frequency, f = fraction of effective collisions
= 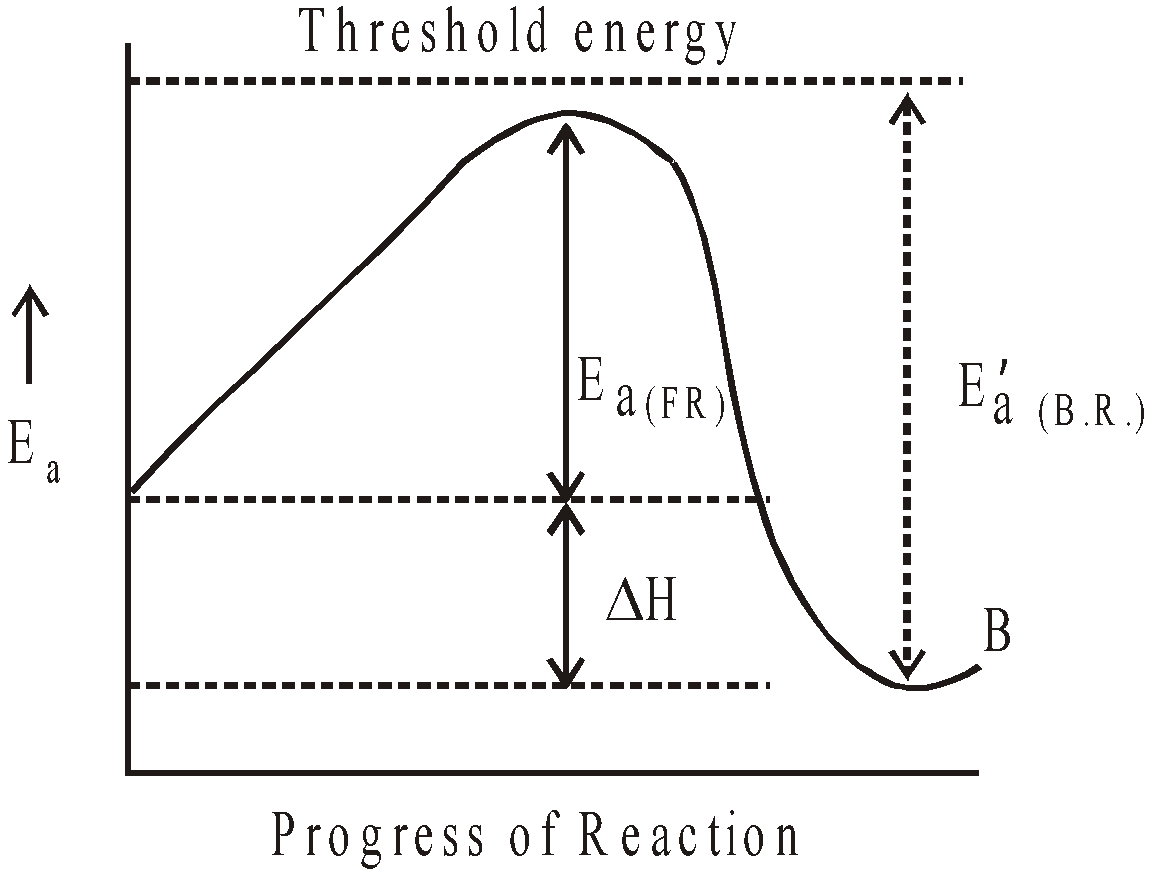 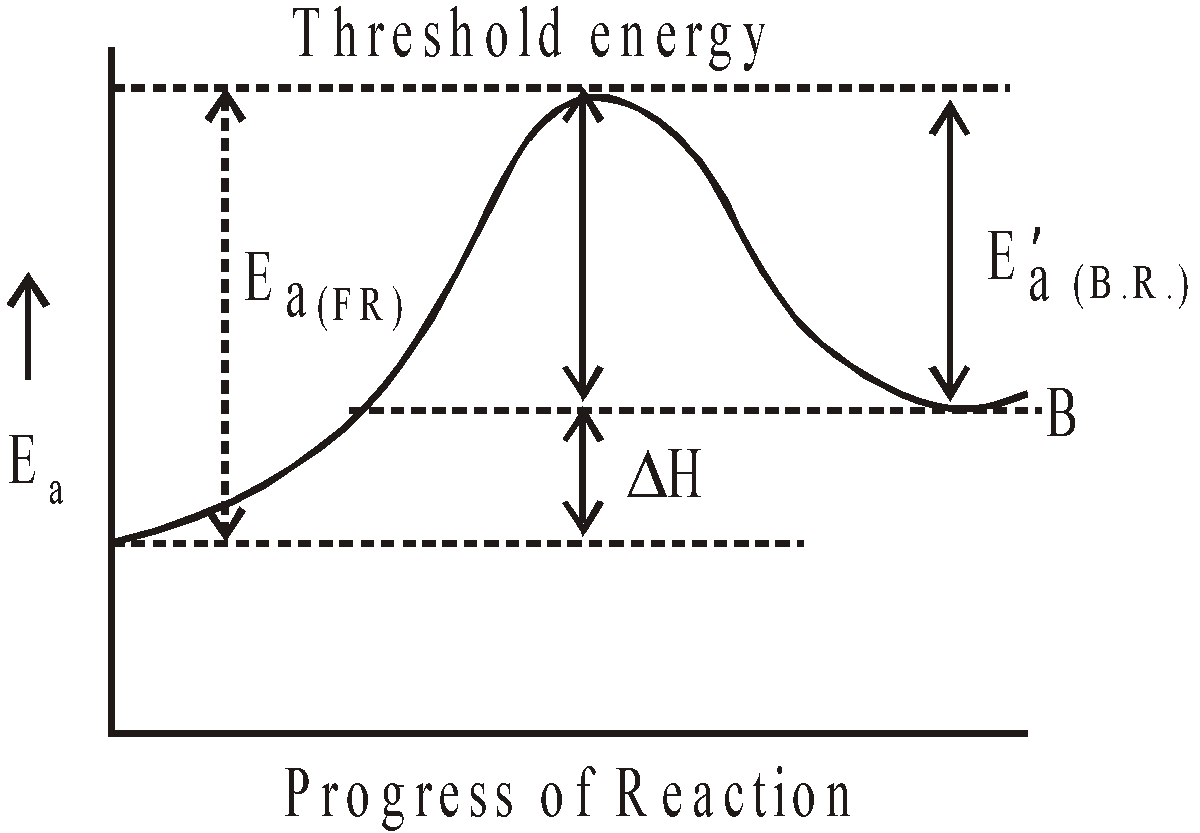 GRAPHICAL REPRESENTATION OF THE EFFECT OF TEMPERATURE ON RATE OF REACTION 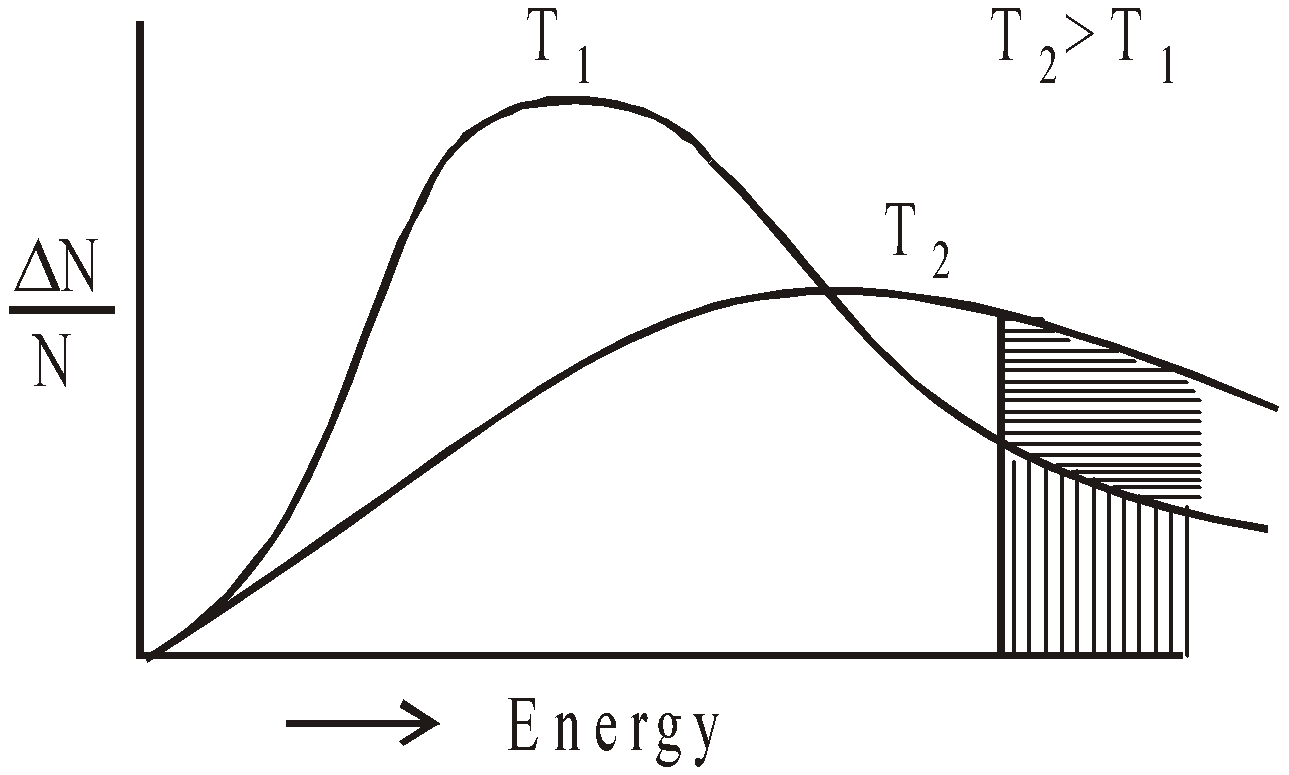 Reactions which take place by the absorption of radiations of suitable wavelength e.g.

Photosynthesis of carbohydrates in plants takes place in presence of chlorophyll and sunlight.

The free energy change of a photochemical reaction may not be negative. In the synthesis of carbohydrates and formation of HCl,

The isomerisation of retina by absorbing photon of light in the retina of eye and reconversion to original form by releasing energy is known as vision.

Only those rays which are absorbed by the substance are effective in producing a chemical change. A part of light is reflected and transmitted also.

In a photochemical reaction, one quantum of active light (photon) is absorbed per molecule of the reacting substance which disappears.

Number of moles reacting per Einstein of the light absorbed. It is expressed as

Emission of light in a chemical reaction at ordinary temperature is called chemiluminescence.

The absorption of energy and instantaneous re-emitting of the energy is called fluorescence.

The continuous glow of some substances even after the cutting of source of light is called phosphorescence e.g. ZnS.

EFFECT OF CATALYST ON REACTION RATES

A catalysed reaction provides a new pathway or a mechanism by which the potential energy barrier between the reactants and products is lowered. The graphical representation is as follows : 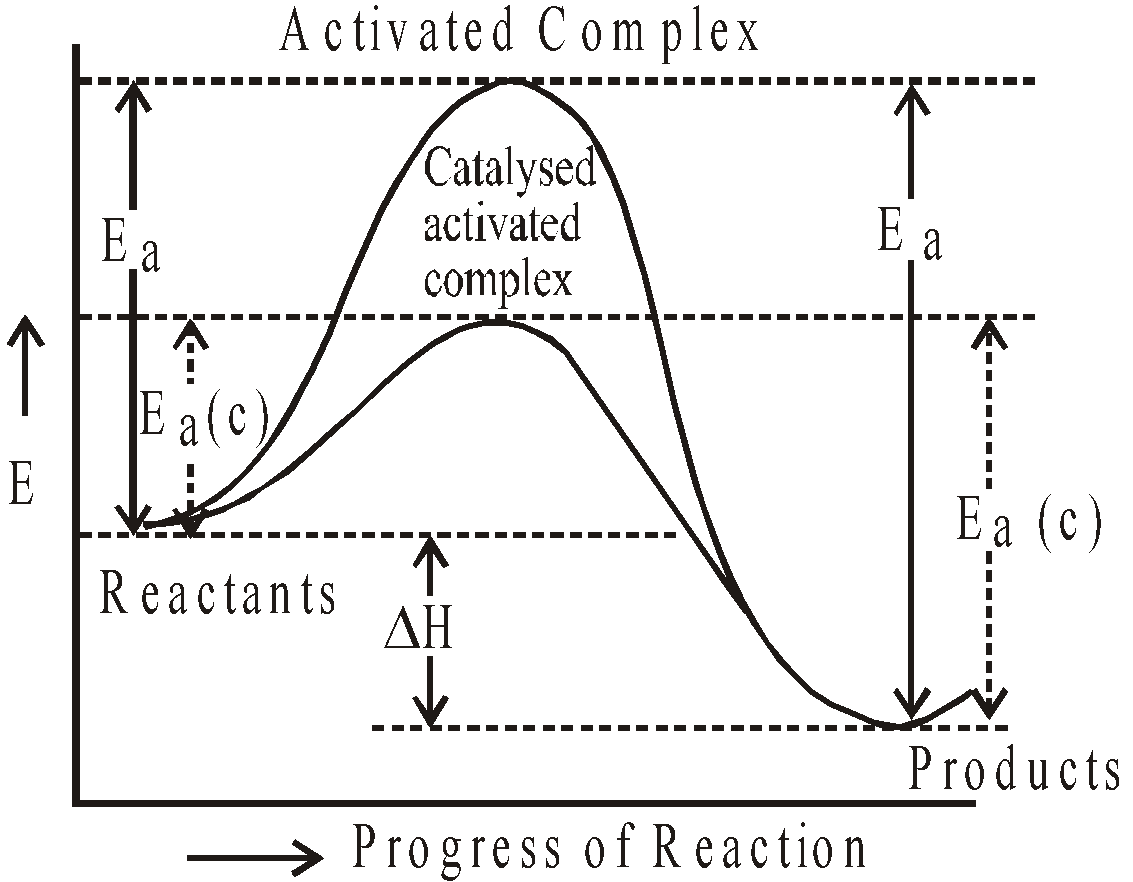 STUDY OF KINETICS OF SOME REACTIONS

HYDROLYSIS OF AN ESTER

CH3COOH + C2H5OH
It is biomolecular and 1 order. The rate constant is given by

and conc. of ester present after time

The change is noted by rotation of plane polarised light in a polarimeter.

Hence velocity constant k is given by