The constituent particles are arranged in definite geometrical pattern i.e. they have lattice structure.

They have random arrangement of the constituent particles (amorphous – means without any form).

DIFFERENCES BETWEEN CRYSTALLINE AND AMORPHOUS SOLIDS

The three dimensional orderly arrangement of constituent particles of a crystalline solid is known  as Crystal lattice.

The smallest geometrical portion of the crystal lattice which can be used as repetitive unit to build up the whole crystal is called unit cell.

SIMPLE OR PRIMITIVE : Unit cell in which the particles are present at the corners only

FACE CENTRED : In which the particles are present at the corners & at the centre of each of six faces.

BODY CENTRED : In which the particles are present at the corners and in the centre.

END FACE CENTRED : In which the particles are present at the corners and at the centre of two opposite faces.

Atoms touch each other along edges.
Hence r =

Atoms touch each other along the face diagonal.
Hence r =

Atoms touch each other along the body diagonal.
Hence r =

SIZE AND SHAPE OF CRYSTALS

The slower the rate of formation of crystal, the bigger is the size of crystal and vice versa.

The angle between any two faces is called an interfacial angle. Interfacial angle remains the same in the same substance although the size of faces or even shape of crystal may vary.

LAW OF RATIONALITY OF INDICES OR INTERCEPTS

The ratio between intercepts on crystallographic axes for the different faces of a crystal can always be expressed by rational numbers.

The plane LMN has intercepts OL, OM and ON along X, Y and Z axes of lengths 2a, 4b and 3c respectively. When OA = a, OB = b and OC = c are taken as unit distances, the intercepts are in the ratio 2a : 4b : 3c and coefficients of a, b and c are known as WEISS INDICES.
Weiss indices may have any values integers, fractional or infinity.
MILLER INDICES
Reciprocals of Weiss indices and multiplying throughout by smallest number to make integers are known Miller indices and represented by h, k and l and the plane as (hkl). For example, in (112) plane h = 1, k = 1 and l = 2.
The distance between the parallel planes in a crystal is designated as dhkl. For different cubic lattices the interplanar distances are given by

where a = length of cube side and h, k and l are Miller indices.

. If axes coincide with or are parallel to the edges of crystal faces, then

will be the same as interfacial angles. 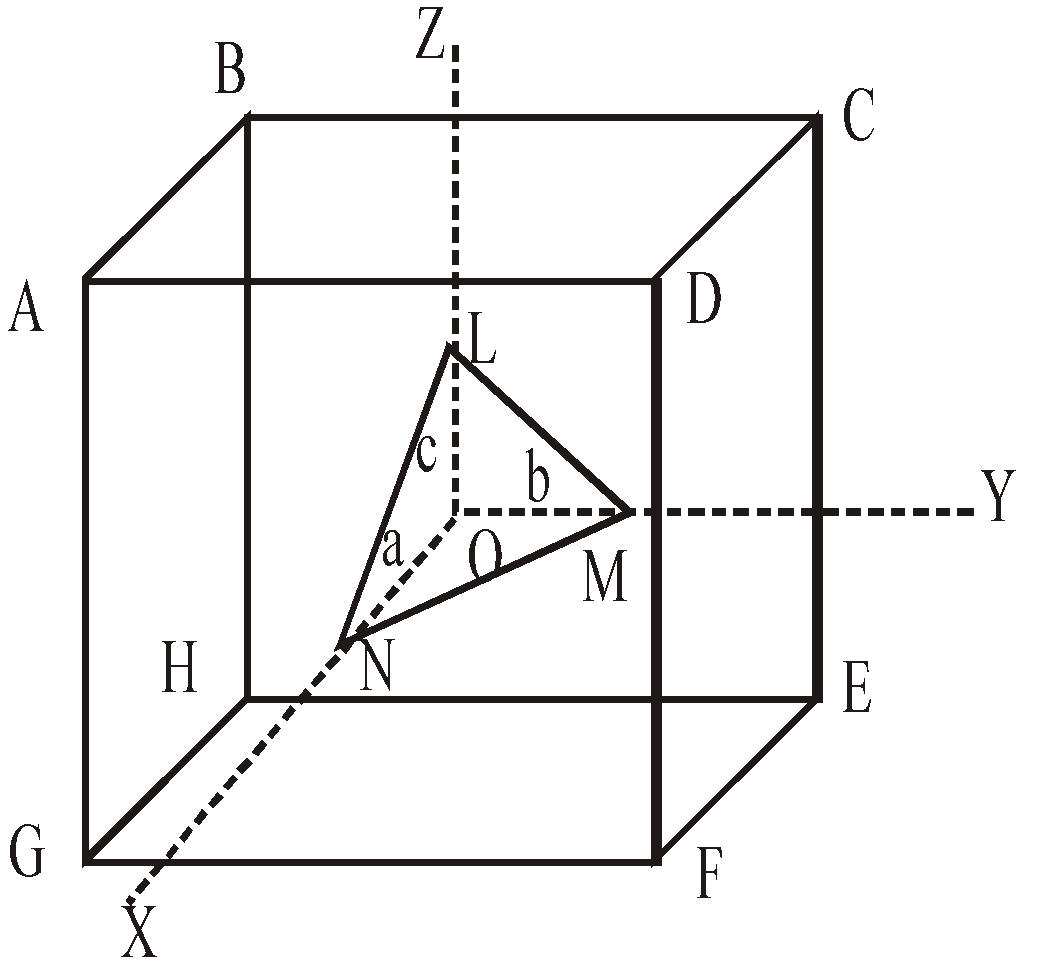 , they are reflected from different planes. The resulting reflected beam will be strong if all reflected rays are in phase. Now as
Phase difference =

Now from figure the path difference between waves reflected from upper planes = AO + OB
From simple trigonometry, if d is the distance between successive layers then sin

This is Bragg’s equation.

There are about 230 crystal forms, which have been grouped into 14 types of space lattices called BRAVAIS LATTICES on the basis of their symmetry and 7 different crystal systems on the basis of interfacial angles and axes.

Bravais showed from geometrical considerations that there are only 7 shapes in which unit cells can exist. These are:-
On the basis of presence of particles there are 4 types of unit cells
He also showed that out of possible 28 unit cells (Seven shapes × four types in each shape = 28) only 14 actually exists. These are called BRAVAIS LATTICES.

It is defined as the number of particles immediately adjacent to each particle in the crystal lattice.
High pressure increases C.N. and high temperature decreases the C.N.

PACKING OF CONSTITUENT PARTICLES IN CRYSTALS

It is of two types-
Square close packingSpace occupied by spheres is 52.4%

Hexagonal close packingSpace occupied by spheres is 60.4%.Hence it is more efficient.

Following the hexagonal close packing here, we have two layers.

The space left after hcp and ccp (74.0% in each case) is known as interstitial voids. They are of two types:
TETRAHEDRAL VOIDS : The vacant space touching four spheres is called tetrahedral void. The radius ratio is 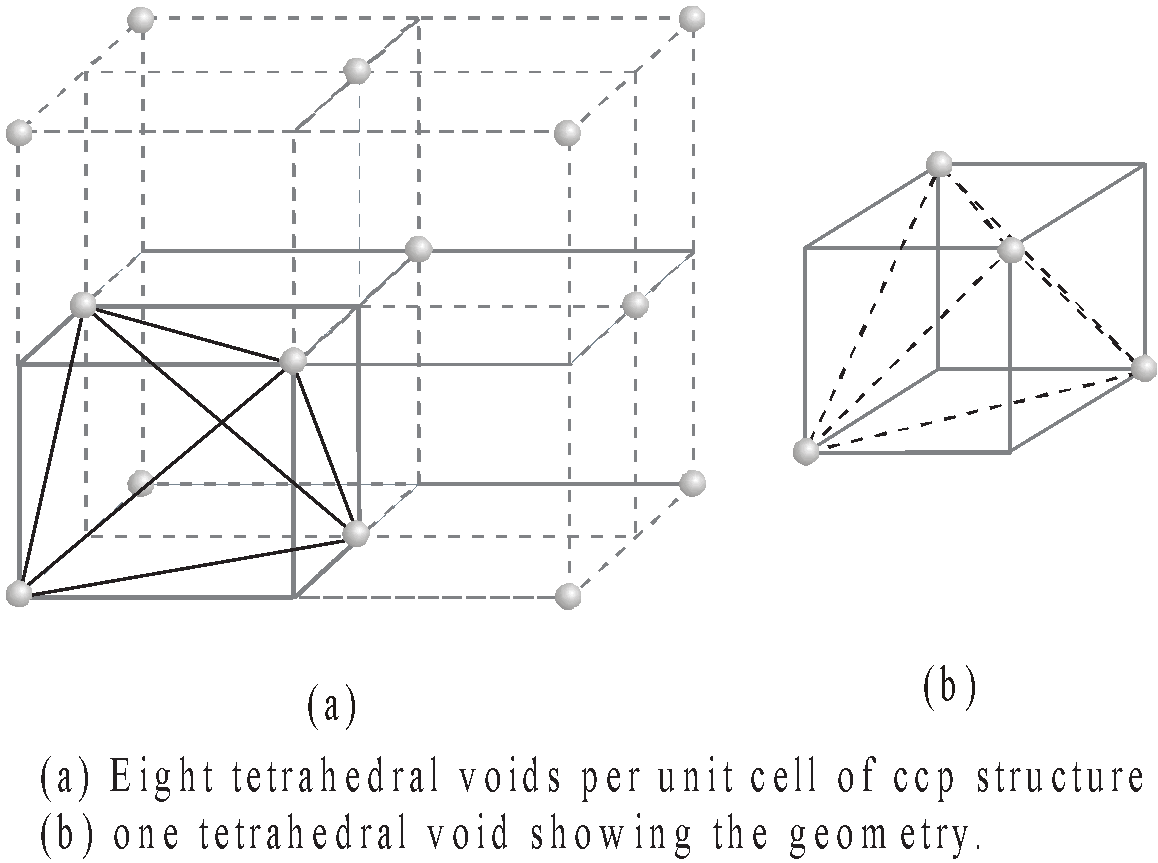 The number of tetrahedral voids is twice the number of spheres (atoms).
OCTAHEDRAL VOIDS : The vacant space touching six spheres is called octahedral void.
The radius ratio is 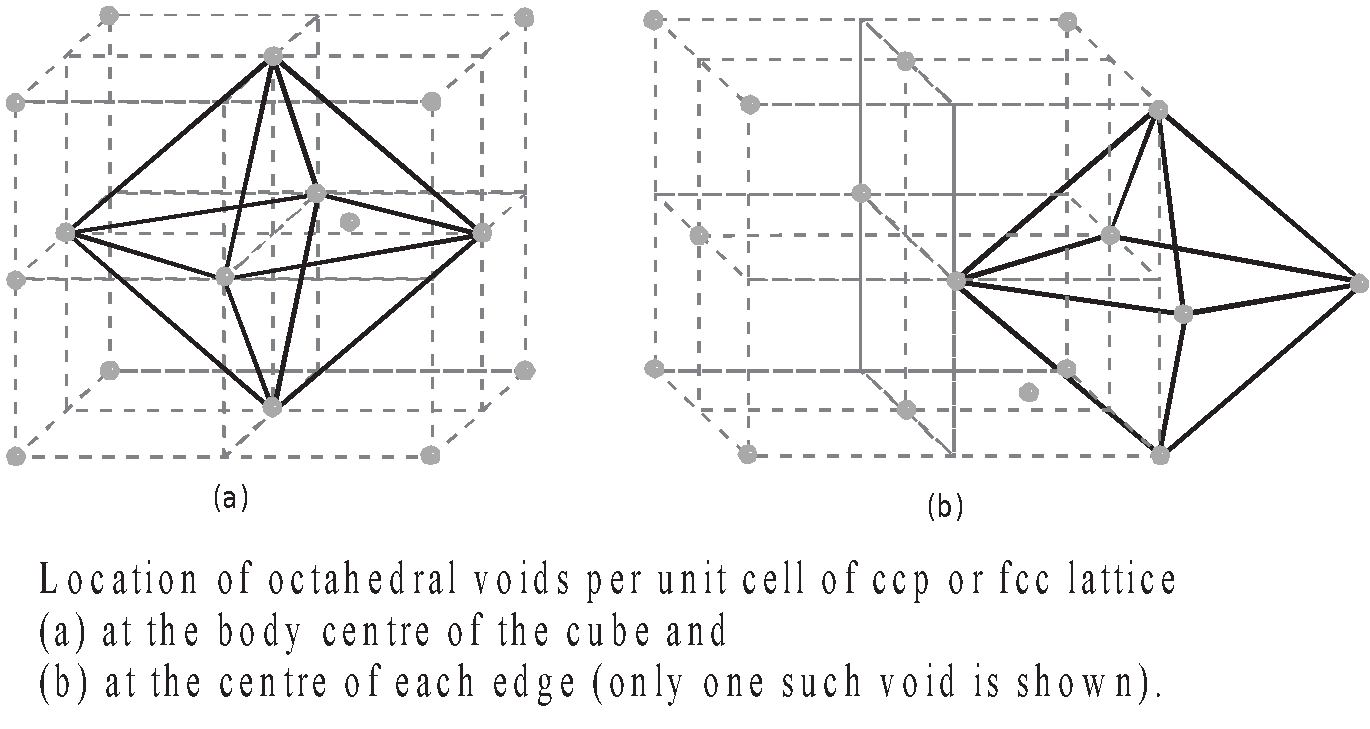 Cations tend to get surrounded by the largest number of anions.
Therefore, the larger the

ratio, the larger is the coordination number.

PRESENCE OF CATIONS AND ANIONS IN UNIT CELL

LATTICES OF SOME ELEMENTS

In NaCl structure, distance between cation and anion

COORDINATION NUMBER OF AN ATOM IN

The mineral MgAl2O3 is known as spinel. The oxide ions are arranged in ccp, Mg++ ions occupy tetrahedral voids and Al+++ ions occupy the octahedral voids. Ferrite ZnFe2O4 has spinel structure. Being magnetic these are used in telephones and memory loops in computers.

They are of two types:-

Further they may be divided as

It is due to missing of ion pairs (one cation and one anion) from their lattice sites. It maintains the electrical neutrality. Density of crystal decrease. It is more common in compounds with high coordination number and when size of positive and negative ions is almost equal. Example NaCl, KCl, CsCl and KBr etc.

It is due to dislocation of ion from its usual site to interstitial position. Density remains the same. It is common in compounds having low coordination number and large difference in size of +ve and –ve ions. Examples ZnS, AgCl, AgBr and AgI.
AgBr shows both of the above defects.

METAL EXCESS (DUE TO ANION VACANCY)

It is due to absence of anion from lattice site leaving a hole which is occupied by electron to maintain electrical neutrality
A+ B– A+ B–
B– A+ e– A+
F-Centres – Holes occupied by  electrons are called F-Centres (Colour centres). The greater the number of F-centres the greater is the intensity of colour of solid and solids are paramagnetic in nature. Due to F-centres
NaCl is yellow
KCl is violet
LiCl is pink.
Crystals showing schottky defect also show this defect.

METAL EXCESS DUE TO INTERSTITIAL CATIONS

It is due to extra positive ion and an electron occupying an interstitial position
A+ B– A+ B–
A+ e–
B– A+ B– A+
Crystals exhibiting Frenkel defect show this defect e.g.:- ZnO.

METAL DEFICIENCY DUE TO CATION VACANCY

It is due to absence of a metal ion from its lattice site and charge is balanced by ion having higher positive charge.
A+ B– O B–
B– A++ B– A+
Transition metals exhibits this defect due to metal deficiency, the compound obtained are non stoichiometric. e.g. it is  difficult to prepare ferrous oxide with the ideal composition FeO. What we actually obtain is Fe0.95O or FexO with x=0.93 to 0.96

It is due to presence of negative ion in interstitial position and presence of metal ion with extra charge.
A+ B– A+ B–
B–
B– A+ B– A++
This defect is not common

NON STOICHIOMETRIC DEFECT DUE TO PRESENCE OF FOREIGN ATOMS

In AgCl crystals two Ag+ ions may be missing while one Cd++ occupies one of the vacant sites.
Ag+ Cl– Ag+ Cl–
Cl– Cd++ Cl–
Fool’s gold : Some samples of Iron pyrites shine like gold due to exchange of electrons between Fe2+ and Fe3+, which leads to metallic lustre. Such samples are known as fool’s gold.

Their conductivity is due to the presence of impurities. They are formed by doping e.g. Si doped with P.

It is defined as addition of impurities to a semiconductor to increase the conductivity. Doping of Si or Ge is carried out with P, As, Sb, B, Al or Ga.

Impurities capable of donating electrons are known as donors e.g. P, As, Sb.

Impurities capable of accepting electrons are known as acceptors e.g. B, Al, Ga.

Silicon doped with phosphorus is called n-type semiconductor.
The conductivity is due to presence of negative charge (electrons).

Silicon doped with gallium is called p-type semiconductor.
The conductivity is due to the presence of positive holes.

The charge developed on the crystal due to mechanical stress is called piezoelectric effect and the current thus produced is called piezo electricity.

The electric current produced by heating on the faces of a crystal is called pyroelectricity.

When the dipoles in alternate lattices point are in opposite direction and net dipole moment is zero, the crystals are referred to as antiferroelectric. Example is lead Zirconate PbZrO3.

The substances which are weakly repelled by magnetic fields e.g. KCl, NaCl and TiO2. It is independent of temperature.

It is due to compensatory alignment of moments ⬆️ ⬇️ ⬆️ ⬇️ ⬆️ ⬇️ The net moment is zero e.g. MnO, MnSe and KMnFe3.

The alignment of moments are parallel and anti-parallel unequal in number, there is net moment e.g. Fe3O4, ferrites of formula M2+ Fe2O4 (M = Mg, Cu, Zn)

CLASSIFICATION OF SOLIDS ON THE BASIS OF ELECTRICAL CONDUCTIVITY

The substances having the properties of crystalline solids and flow properties of liquids. Examples : Para-azoxyanisole and Normal Octyl-para azoxy cinnamate. Such solids undergo two sharp phase transformations on fusion, first yielding turbid liquid and at higher temperature a clear liquid. The turbid liquids are called liquid crystals and are anisotropic in nature (a property of crystalline solid).

It is the temperature at which a substance changes sharply into the state of liquid crystals.

Existence of a substance in more than one crystalline form is known as polymorphism e.g. Carbon, Sulphur, Tin etc.

The polymorphism in elements is known as allotropy.

It states that isomorphous substances possess an equal number of atoms united in a similar way.