The group 18 of the periodic table consists of colourless, odourless gases at room temperature, isolated by William Ramsay and lord Rayleigh in 1898 from air. They realized that a sample of  nitrogen formed synthetically had a different density than obtained from air after removing oxygen, water vapour and carbon dioxide. The sample from air was heavier and it was found to contain 1.0% mixture of inert gases by volume (except Rn). Radon was obtained by radioactive disintegration of radium.
Helium is second most abundant element in the universe.
Argon is the most abundant of all the inert gases in the atmosphere.

They are all gases under ordinary conditions of temperature and pressure.

Except Radon all occur in atmosphere in dry air 10% by volume. Main commercial source of helium is natural gas .

In 1.0% air the abundance follows the order
Ar> Ne>He>Kr> Xe

The Cp/Cv =1.67 shows their monoatomic nature.

Due to the increase in magnitude of Van der waals forces, the melting point and boiling point increases from He to Rn.

The atomic radii increases from He to Rn and it corresponds to the Van der Waals radii.

The density of  noble gases increases down the group.

They have very low values of heat of vaporisation due to weak van der waals forces of attraction. The value increases down the group.

They are slightly soluble in water and solubility increases from He te Rn.

It is extremely difficult to liquefy inert gases due to weak van der waals forces of attraction among their molecules. Hence they possess low value of critical temperature also.

Due to the presence of stable electronic configuration they have no tendency to accept additional electron. Therefore electron affinity is almost zero.

The polarizability increases with the size and hence follows the order.
He< Ne< Ar< Kr< Xe

Except helium all are adsorbed by coconut charcoal at low temperature.  The extent of adsorption increases down the group.

The following methods are employed for the isolation of Rare gas mixture.

Air (dry and free from CO2) 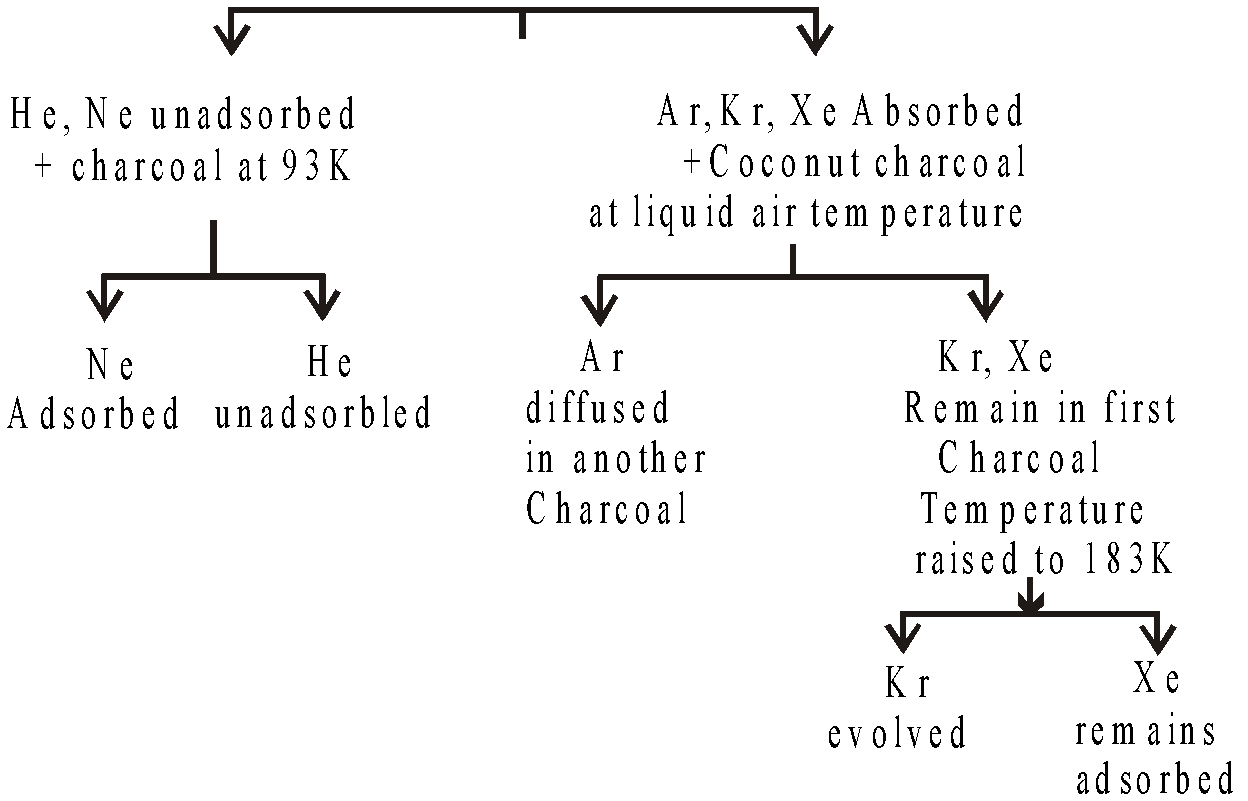 From liquid air – The difference in the boiling points of various constituents of liquid air make possible their separation by fractional distillation.

HELIUM FROM OTHER SOURCES

He is also obtained by heating mineral clavite to 1273K. The gas evolved is collected over potash solution to free from any CO2. It may also be obtained from mineral  by heating with dil.H2SO4 or KHSO4.

The noble gases are inert in nature because of their completely filled s and p subshells. In 1962 the first compound of noble gases was prepared. It is hexafluoroplatinate prepared by Bartlett.

STRUCTURES OF OXYFLUORIDES AND OXIDES OF XENON

XeO3 is the anhydride of Xenic acid H2XeO4

A number of organic and inorganic compounds having noble gases trapped into the cavities of crystal lattices are called enclosure or clathrate compounds. They are known as cage compounds also.
The substance having cavities in crystal lattices is called the host and atom of noble gases entrapped in it is called the guest which are held by Van der waals forces of attraction. The clathrates are non stoichiometric compounds. When clathrates are heated or dissolved the guest atom escapes from the host.
He and Ne do not form clathrates due to their small size.

They are of two types.