Alcohols are usually classified as primary, secondary and tertiary

There are three systems of nomenclature
COMMON SYSTEM
According to this system alcohols are named as Alkyl alcohols eg.

CARBINOL SYSTEM
In this system the alcohols are regarded as derivatives of methyl alcohol which is expressed as “carbinol”.

Cyclic alcohols have the prefix cyclo, and the hydroxyl group is deemed to be on C-1

The compounds with two hydroxyl groups are known as diols

In case of phenols the position of substituents are represented by numbers (the terms ortho, meta and para are non IUPAC)

The value of  bond angle depends upon the bulk of R group and repulsion between lone pair of electrons on oxygen.

Addition of water to an unsymmetrical alkene follows Markovnikov’s rule

The method is suitable for the preparation of secondary and tertiary alcohols only.
Mechanism :

Oxidation of alkenes. The overall process is the addition of water molecule to unsymmetrical alkene follow Kharasch effect

BY REDUCTION OF ACIDS AND THEIR DERIVATIVES

BY HYDROLYSIS OF ETHERS

By treatment with nitrous acid

Note: Methylamine does not give methyl alcohol when treated with HNO2. It gives CH3OCH3 and CH3ONO

The hydroxyl groups in alcohols can form hydrogen bonds with water and many low molecular weight alcohols are miscible with water. The hydroxyl group is said to be hydrophilic (water loving) and alkyl (hydrocarbon) end is hydrophobic (water hating). The solubility decreases with increase in molecular mass. The hydrophobic effect of alkyl group predominates the hydrophilic effect of –OH group. Among isomeric alcohols, the branched chain alcohols are more soluble due to less surface area of hydrophobic part.

Due to intermolecular hydrogen bonding the alcohols have higher value for boiling points.

Hence three types of reactions are shown by alcohols.

Phosphate esters are important in nature since they link the nucleotide bases together in DNA.

If R is primary alkyl

SN1
The order of reactivity of hydrogen halides HI> HBr > HCl
The order of reactivity of alcohols tertiary > secondary > primary
In case of HCl, ZnCl2 (Lewis acid) is added to help compensate for the lower nucleophilicity of chloride ion.
The mixture of conc. HCl and ZnCl2 is called the Lucas Reagent, secondary and tertiary alcohols react via SN1 mechanism
Limitations of use of HX

Dehydration proceeds by Saytzeff’s rule i.e. more substituted alkene is formed or hydrogen is removed from the C-atom containing lesser number of hydrogen atoms.
The reaction of ethyl alcohol with H2SO4 is very sensitive to reaction conditions 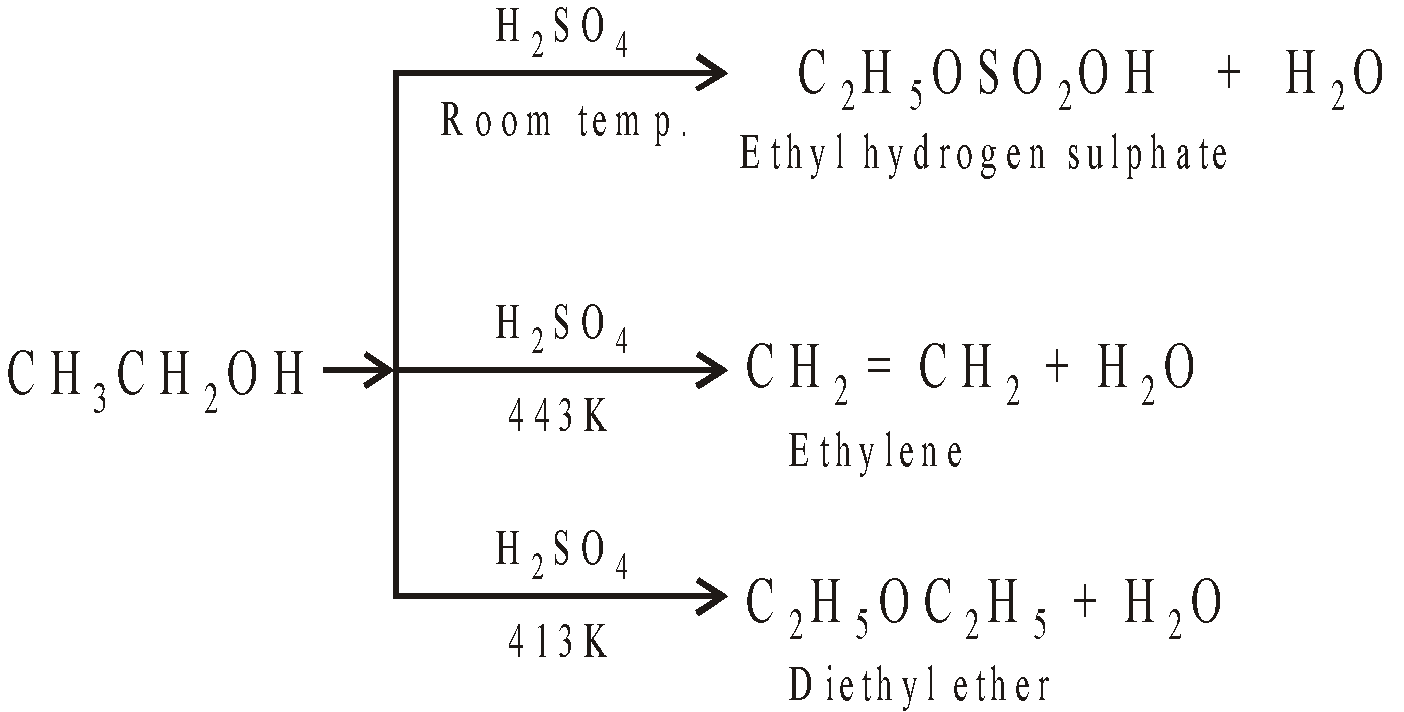 The formation of ether is SN2 reaction (nucleophilic bimolecular)

Chromic acid is produced in situ

Hence, drastic condition is required.
By oxidation, distinctions are made between 1º, 2º and 3º alcohols

When vapours of 1º, 2º and 3º alcohols are passed over hot reduced copper at 300ºC, they give different products.

This property is also utilised for distinction between 1º, 2º and 3º alcohols

The reaction with halogens is oxidation and halogenation

Tosylate groups undergo a variety of SN2 reactions, the common are

Colourless liquid, burns with blue flame, b.pt. 78.1ºC, Sp. gr. 0.789. It can not be dried over anhydrous calcium chloride due to formation of addition product. CaCl2.4C2H5OH. It gives iodoform test.

RECTIFIED SPIRIT
It contains 95.5% ethyl alcohol and 4.50% water. It is an azeotrope (Constant boiling mixture) and boils at 74ºC.
ABSOLUTE ALCOHOL
Alcohol containing no water i.e. 100% C2H5OH is known as absolute alcohol. It is prepared as follows.

Final traces of water are removed by adding anhydrous CuSO4 or metallic magnesium and again distillation, Mg forms Mg(OH)2.
Ist fraction distills at 64.8ºC consisting water 7.49%, alcohol 18.5%, benzene 74.1%
IInd fraction distills at 68.2ºC consisting of alcohol 32.4%, benzene 67.6%
IIIrd fraction distills at 78.2ºC and gives absolute alcohol
METHYLATED SPIRIT
The rectified spirit rendered poisonous by addition of 4-5% methyl alcohol, traces of pyridine and some copper sulphate is known as methylated spirit or denatured alcohol.
POWER ALCOHOL
Alcohol mixed with petrol and used in internal combustion engines is known as power alcohol. Mixing is done in presence of 1% benzene, or 1% ether or 1% tetralin.
ALCOHOLIC BEVERAGES
The liquors used for drinking purposes containing alcohol as the main intoxicating agent are known as the alcoholic beverages.
Undistilled: Prepared from fruit juices or grains
Distilled: Prepared by distillation of fermented liquids
PROOF-SPIRIT
An aqueous solution of alcohol containing 57.1% alcohol by volume or 49.3% alcohol by weight is called proof spirit.
ALCOHOLMETRY
The determination of the percentage of alcohol is known as alcoholometry. We simply determine the sp. gr. of the sample by means of hydrometer and find the exact percentage of alcohol by referring reference tables.

Some vinyl bromide is also formed

To get better yield ethylene bromide is heated with potassium acetate

PHYSICAL PROPERTIES
It is colourless viscous liquid bpt 197ºC mpt –11.5º, miscible with water in all proportions due to intermolecular hydrogen bonding.
CHEMICAL PROPERTIES
These can be summarised as follows 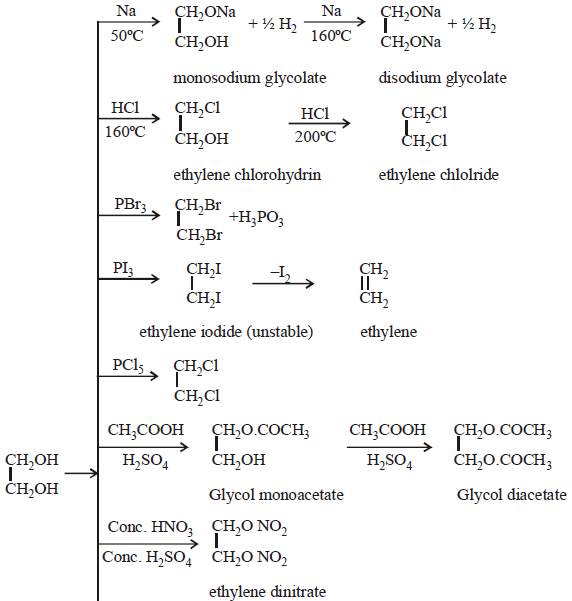 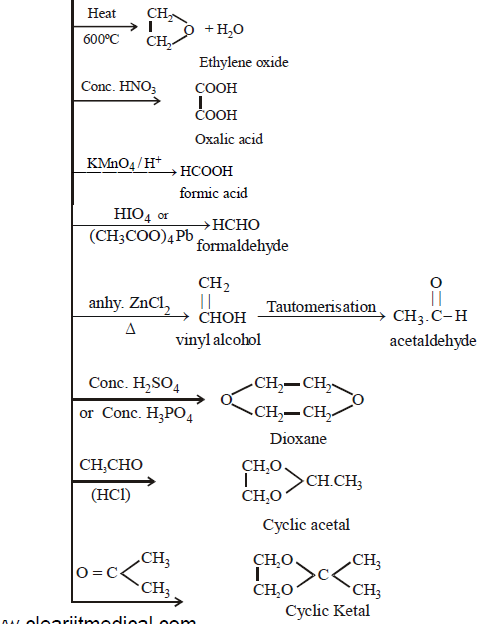 After salting out of soap by adding saturated solution of NaCl, the filtrate obtained is known as spent lye which is worked up for glycerol.

Stearic acid is removed by filtration. The filtrate, known as sweet lye, is worked up for glycerol. Stearic acid is used for the manufacture of candles.

PHYSICAL PROPERTIES
It is colourless, odourless thick viscous liquid miscible with water in all proportions bpt 290ºC but at this temperature it is decomposed. Hence it is purified by distillation under reduced pressure. It shows intensive hydrogen bonding.
CHEMICAL PROPERTIES
It contains two primary and one secondary alcoholic group 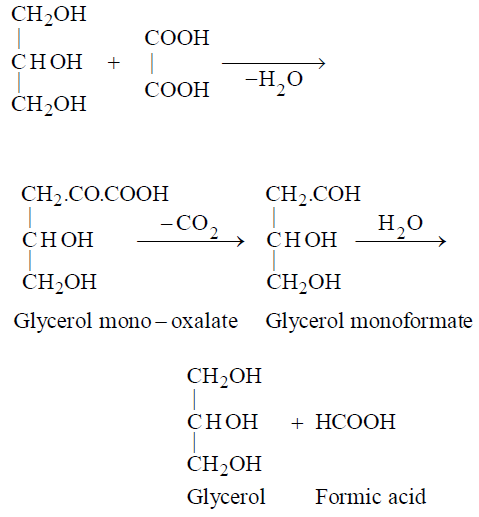 At 260ºC allyl alcohol is the product

It is also known as Nobel oil after the name of its discoverer Alfred Nobel. It is dark coloured oily liquid, highly poisonous, explodes violently when heated giving huge volume of gases

Aromatic hydroxy compounds are of two types
Phenols are classified as-

GENERAL METHODS OF PREPARATION OF PHENOLS

Phenols separate out as oily layer and separated from aqueous layer containing Na2CO3 and fractionally distilled.

Phenol is a colourless crystalline solid mpt. 42ºC and bpt 183ºC. It is deliquescent, becomes pinkish on exposure to air due to oxidation, sparingly soluble in cold water.

The presence of electrons withdrawing groups in the nucleus increase the acidity. This is due to inductive effect and mesomeric effect.The latter effect is operative when the group is in the o- or p- but not in m-position. The resultant anion is more stabilised through delocalisation of electrons.
Compound pka

10.19
The smaller the value of pka the more is the acid character. 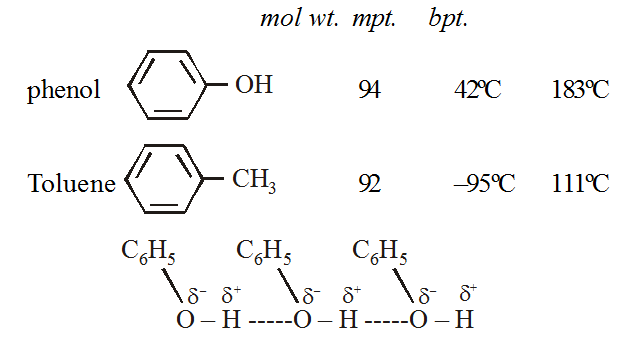 Claisen’s rearrangment : When o-allyl ether of phenols are heated to 100-250ºC without solvent or catalyst, the allyl group migrates to ortho position with inversion of configuration

REACTIONS GIVEN BY PHENOLS ONLY 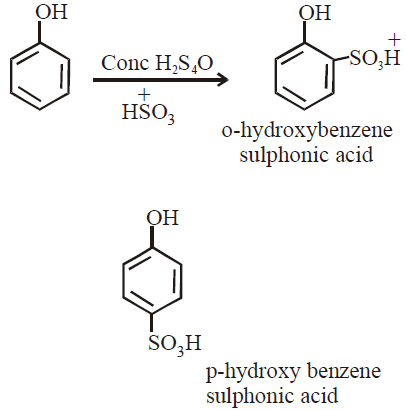 The p-isomer is the main product if temperature rises above 160°C or when potassium phenate is used in place of sodium salt.
Reimer-Tiemann Reaction

Reimer-Tiemann reaction is electrophilic substitution reaction and electrophile is dichlorocarbene. Similarly with carbon tetrachloride and alkali o- and p-hydroxybenzoic acid are obtained

It is used as an internal indicator in acid base titration. It gives pink colour in alkaline medium and colourless in acid medium. Its pH range is 8-9.8.
Condensation with HCHO (Lederer-Manasse reaction)

The hybridisation of O atom in ethers is sp3 (tetrahedral) and shape is V.

Common System : They are named as dialkyl ether when the two alkyl groups are the same eg.

ethyl methyl ether
IUPAC System : They are named as Alkoxy alkane. The smaller group is made alkoxy and larger the alkane e.g.

The alkyl halide should be primary. The secondary and tertiary alkyl halides undergo elimination reaction to give alkenes.

Dimethyl ether and ethyl methyl ether are gases. Others are highly volatile, inflammable liquids. Slightly soluble in water due to H-bond formation.

They are polar in nature the value of dipole moment is 1.18D. 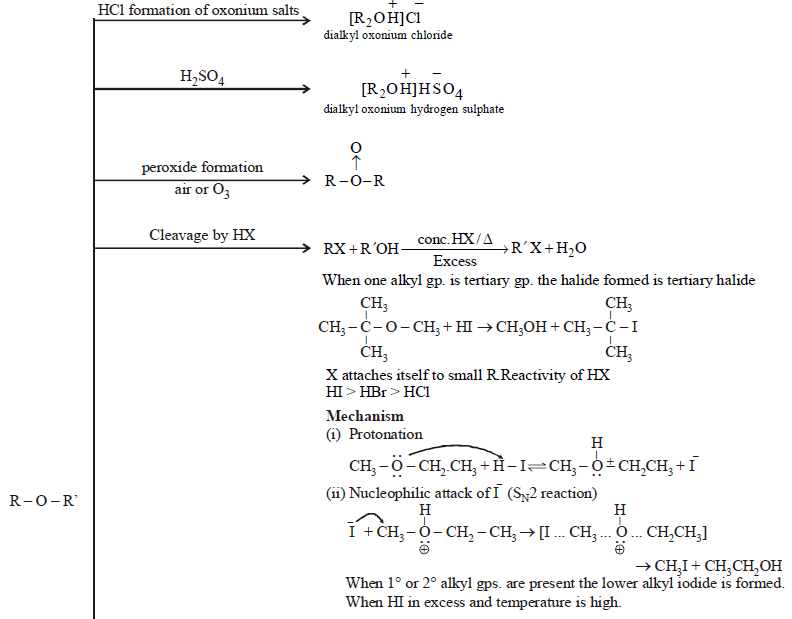 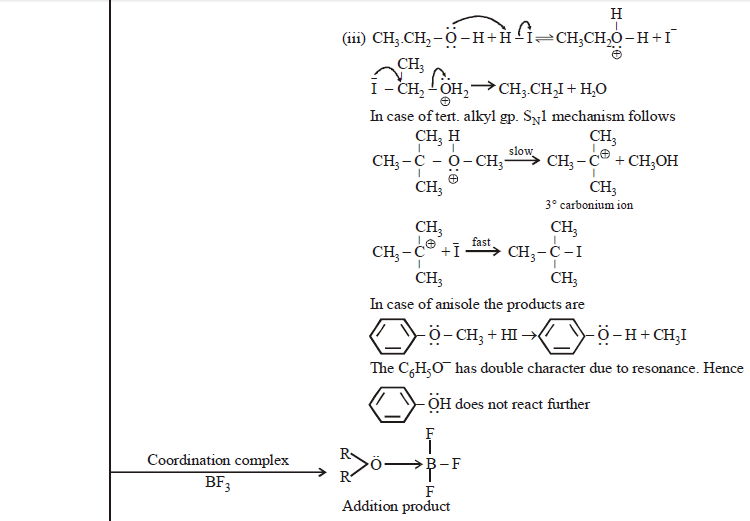 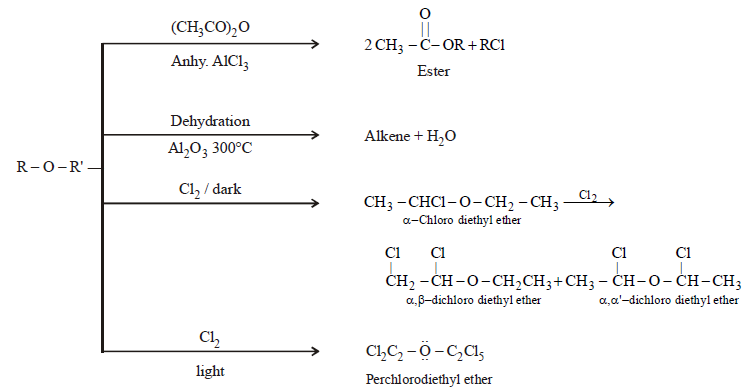 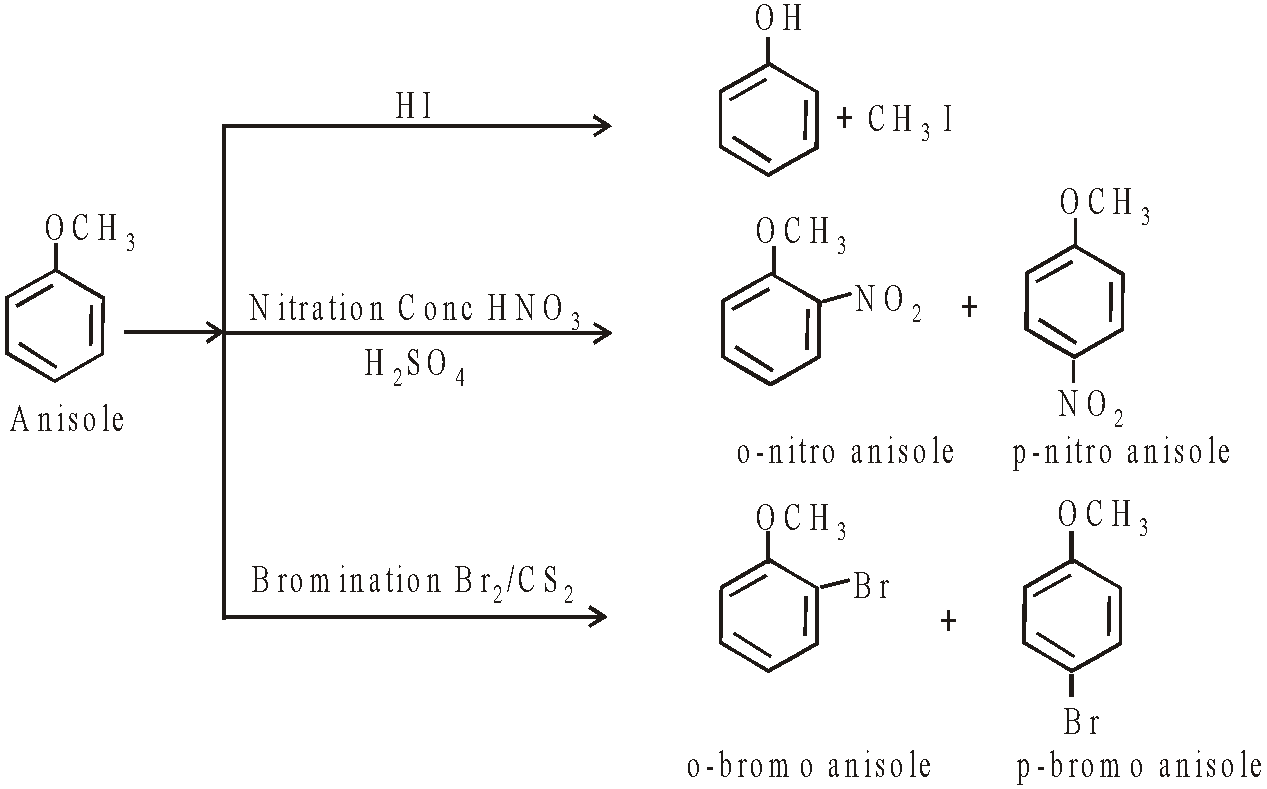 They are cyclic polyethers

1 thought on “Notes and Study Materials -Alcohols, Phenols and Ethers”