Homogeneous mixture of two or more non reacting components whose composition can be varied within certain limits is known as solution.Binary solution : Containing two components only

The component which is present relatively in smaller proportion in the solution is called solute.

The component which is present in larger proportion in solution is called solvent.

Depending upon the physical state of solute and solvent, the solutions may be of the following types.

SOLUTIONS OF SOLIDS IN LIQUIDS

A solution which remains in contact with excess of the solute is said to be saturated.

The amount of solute dissolved in 100g of a solvent to form a saturated solution at a given temperature is termed as the solubility of solute.

Have solubility greater than 1g per 100 ml

If the dissolution is exothermic the solubility decreases with temperature e.g. Li2CO3, Na2CO3, Na2SO4, CeSO4

The smaller the value of lattice energy and more the value of heat of hydration more is the solubility of ionic compounds. Lattice energy depends upon force of attraction (F) between oppositely charged ions and is given by

FACTORS INFLUENCING THE SOLUBILITY OF A GAS

The mass of a gas dissolved per unit volume of solvent is proportional to the pressure of the gas at constant temperature.

The volume of a gas dissolved in a solvent at a given temperature is independent of the pressure.
Most gases obey Henry’s law :

EXPRESSION OF THE CONCENTRATION OF A SOLUTION

Molarity (M) : Number of moles of the solute dissolved in one litre of solution.
Molarity (M) =

VARIATION OF VAPOUR PRESSURE WITH TEMPERATURE

It is given by Clapeyron-Clausius Equation

In general, the vapour pressure of a component in solution is less than that of pure solvent.

The partial pressure of a volatile component of a solution is directly proportional to its mole fraction in solution at any temperature.

where pA = partial pressure of component A,

, where  p = Total pressure and

= Mole fraction of component A in vapour phase

Hmix = 0 i.e. no heat is evolved or absorbed when components are mixed to form the solution  (III)

Solutions which (I), do not obey Raoult’s law, (II)

A mixture of two or more components which like a pure chemical compound boils and distills over completely at the same temperature without change in their chemical composition is called an azeotrope. Non ideal solutions form azeotropes.

It is formed by liquids showing positive deviation. An intermediate composition of liquids having highest vapour pressure, hence lowest boiling point gives this azeotrope. Such azeotropes have boiling points lower than either of the pure component e.g. Rectified spirit (ethanol 95.5% + H2O 4.50%) bpt 351.5 K.

It is formed by liquids showing negative deviation. An intermediate composition of liquids having minimum vapour pressure, hence highest boiling point gives this azeotrope. Such azeotropes have boiling points higher than either of the pure components e.g. Water & HNO3 (HNO3 68% + H2O 32%) bpt 393.5K.

Properties which depend upon the number of particles irrespective of their nature (ions or molecules) are called colligative properties. These are

It is not suitable for non aqueous solution as it gets dissolved. Another artificial semipermeable membrane is Ca3(PO4)2.

The hydrostatic pressure developed on the solution which just prevents the osmosis of pure solvent into the  solution through a semipermeable membrane is called osmotic pressure. 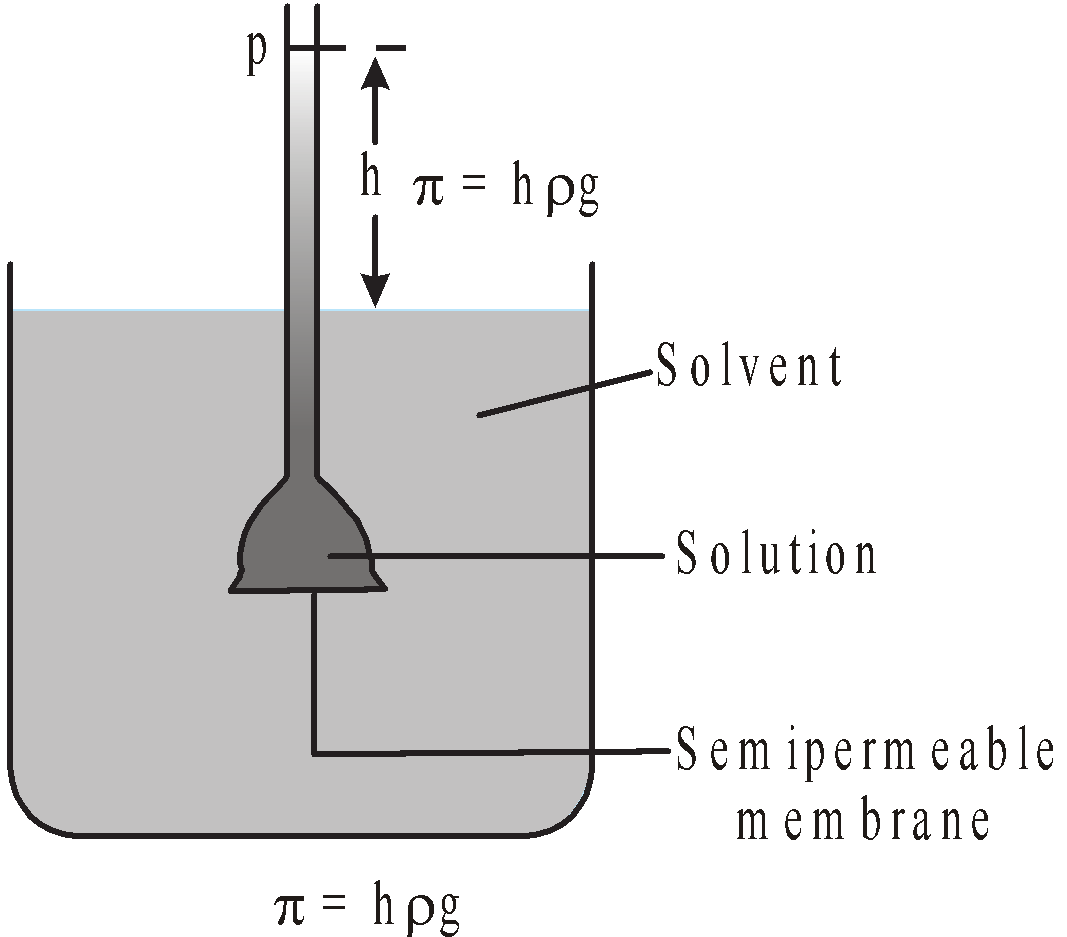 g
or
The minimum external pressure applied to the solution to just stop the process of osmosis is known as osmotic pressure. 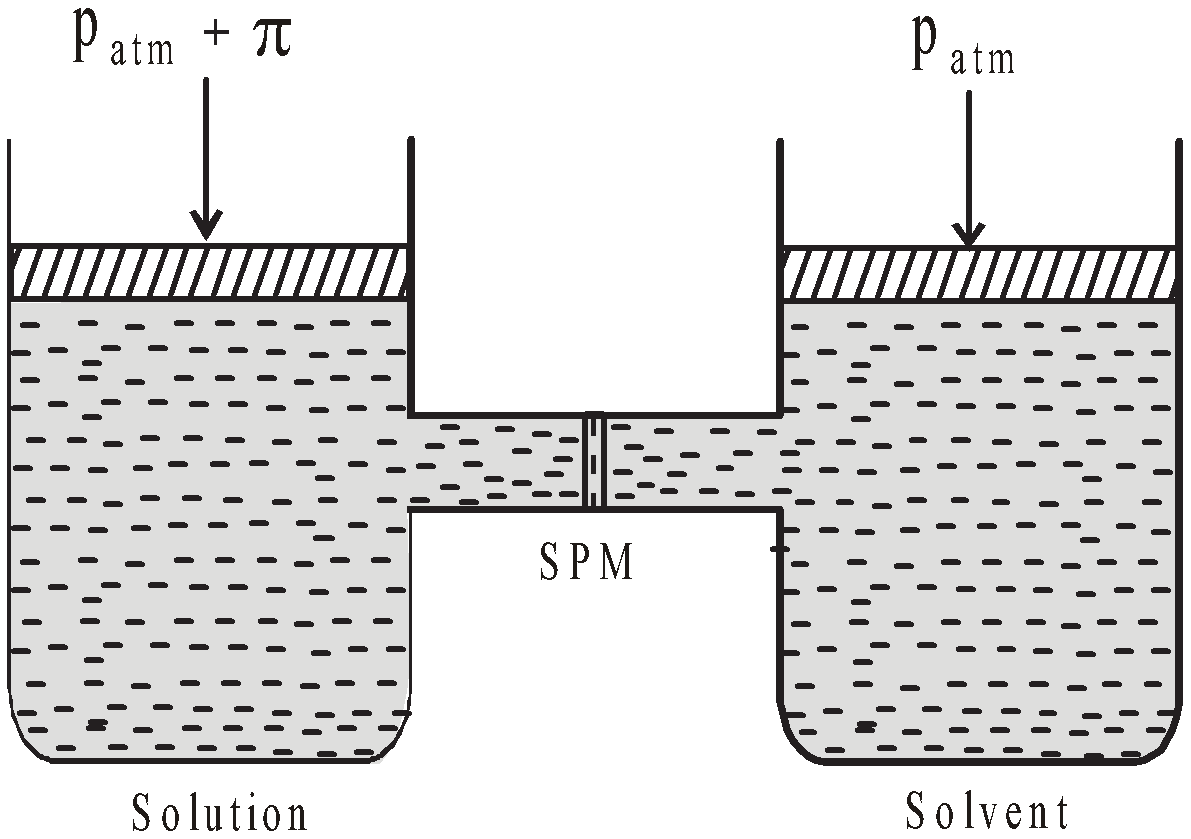 or
The minimum external pressure applied on solution to make its vapour pressure equal to that of solvent is known as osmotic pressure.

Dilute solutions behave like gases and gas laws can be applied to them.

Osmotic pressure of a solution is directly proportional to its concentration at constant given temperature.

Osmotic pressure of a solution is directly proportional to its temperature at fixed concentration.

Equal volumes of solutions having the same osmotic pressure and temperature contain equal number of moles i.e. have same concentration.

RELATION BETWEEN OSMOTIC PRESSURE (P) AND LOWERING OF VAPOUR PRESSURE

Osmotic behaviour of solutes undergoing association or dissociation is equal to molarity × number of particles produced per formula unit of solute known as osmolarity.

The flow of the fluid from the plant cell when placed in a hypertonic solution is called plasmolysis. The plant cell undergoes shrinkage.

Inward osmotic flow of fluid from a cell through semipermeable membranes e.g. grape in water.

When coloured salts e.g. Copper Sulphate, Cobalt Nitrate, Manganese Chloride, Nickel Chloride and Ferrous sulphate etc. are placed in Sodium silicate solution of density 1.1, a colloidal and semipermeable shell of Silicates is formed round the crystal. Inside this, there is strong solution of salt and outside weak solution of sodium silicate. Water permeates into the shell, pressure rises and the shell bursts out, the salt solution escapes but immediately reacts with sodium silicate to form again semipermeable shell of the metallic silicate. The process is repeated again and again and projection of coloured silicates continues to grow.

The mole fraction of the more volatile component is always greater in the vapour phase than in the solution phase. 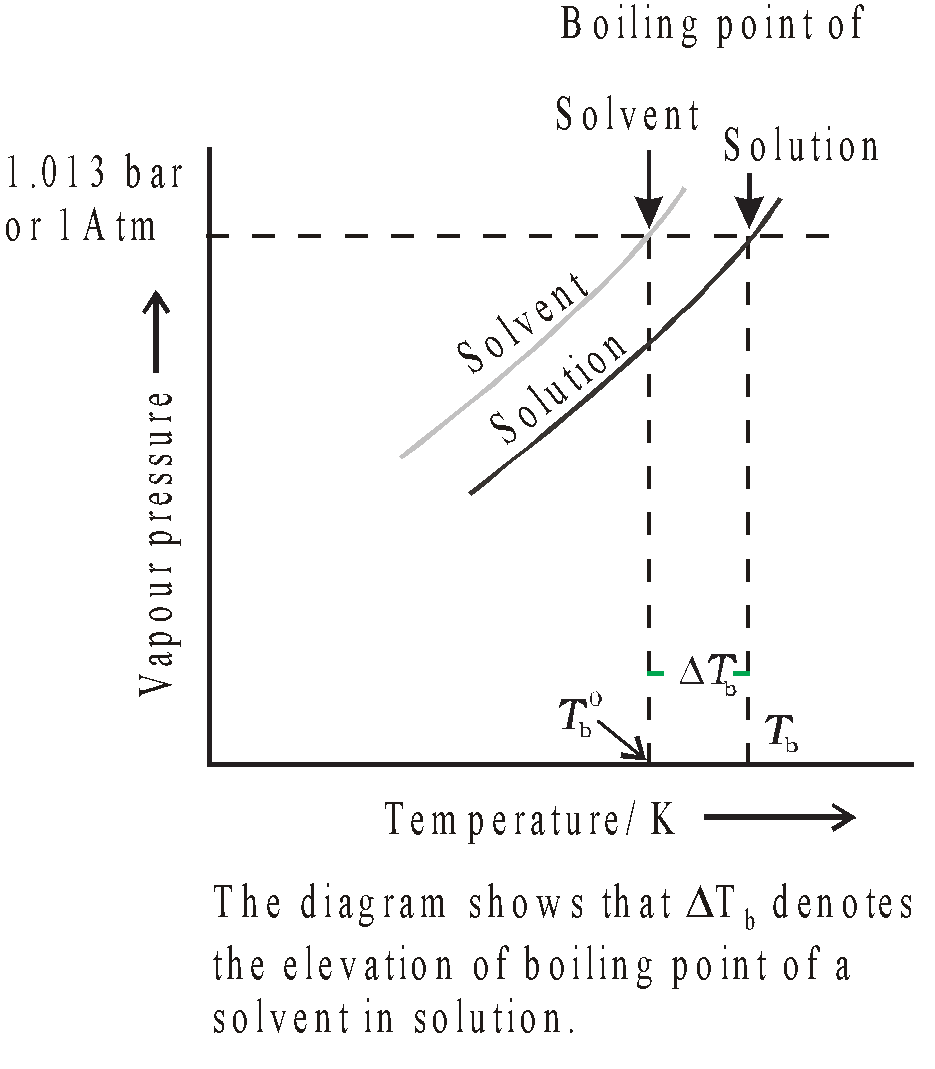 Kb = molal elevation constant or ebullioscopic constant. It is characteristic for given solvent. When
m = 1,

Tb = Kb.
Thus molal elevation constant or ebullioscopic constant is defined as the elevation in boiling point caused by one molal solution. Its value is given by

The temperature at which the vapour pressure of the solvent in its liquid and solid phase becomes the same is known as freezing point of solvent. 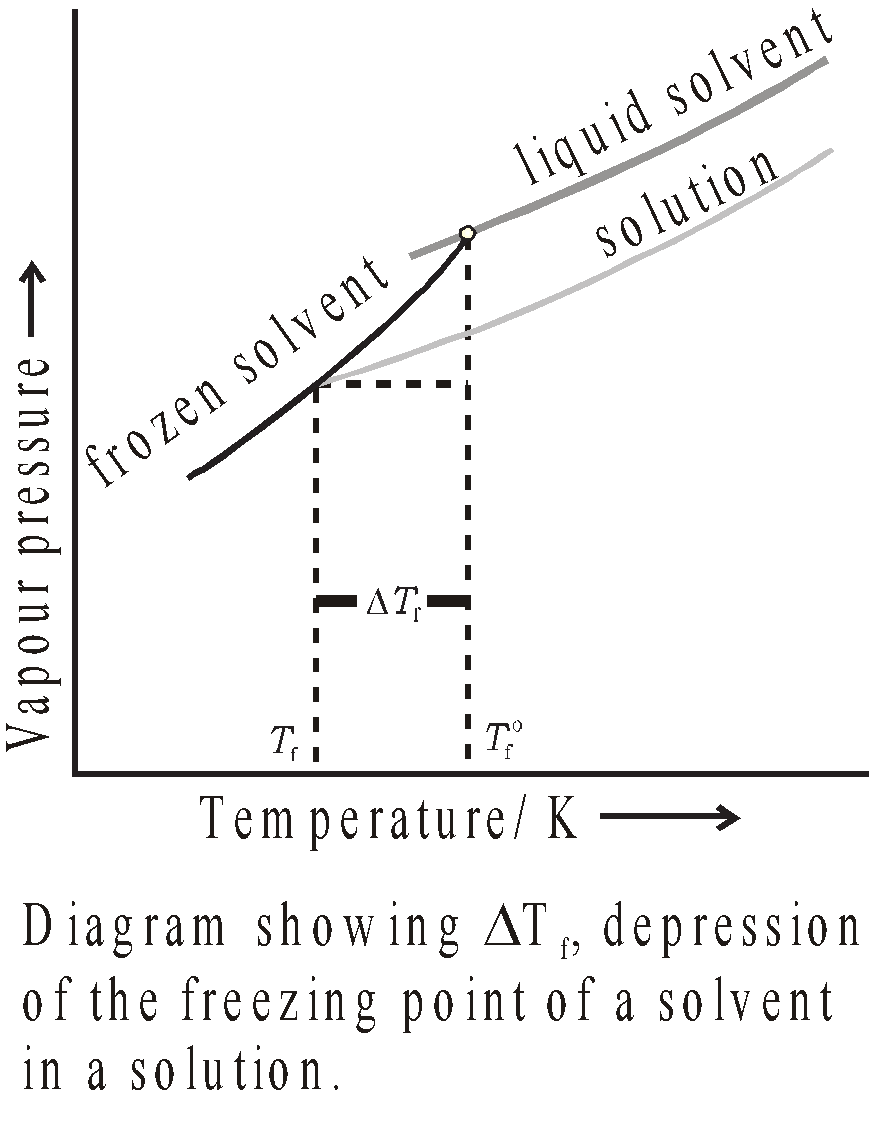 Kf is molal depression constant or molal Cryoscopic constant.
When m (molality) = 1 then

Hence molal depression constant or molal Cryoscopic constant is equal to depression in freezing point caused by one molal solution. Its value is given by

DETERMINATION OF MOLECULAR WEIGHT BY DEPRESSION IN FREEZING POINT

RELATION BETWEEN OSMOTIC PRESSURE AND OTHER COLLIGATIVE PROPERTIES

When solutes undergo association or dissociation in solution, there is decrease or increase in number of particles and there are discrepancies between observed and calculated values of colligative properties.
Colligative property

KCl in water dissociates and its observed molecular mass is 37.25.

Its value is obtained by any of the following expression

m = number of particles of electrolyte given in solution.
i = Van’t Hoff factor i.

Fraction of the total number of molecules undergoing association.

RELATION BETWEEN RELATIVE LOWERING OF VAPOUR PRESSURE AND MOLALITY OF SOLUTION

Where m = molality of solution
M1 = Molecular weight of solvent

RELATION BETWEEN WEIGHTS OF TWO IMMISCIBLE LIQUIDS IN THE DISTILLATE

When two partially miscible liquids A and B are mixed with each other, two layers are formed. First, Solution of A in B and Second, Solution of B in A. Such solutions coexisting together are called conjugate solutions. For example solution of phenol and water.