A substance which decomposes as a result of the passage of electric current is called an electrolyte and phenomenon of decomposition by electricity is called electrolysis.

I = Current strength in amp., t = time in sec.,
Q = Quantity of charge (coulombs)
Z is a constant known as Electrochemical equivalent
When I = 1 amp., t = 1 sec. then Q = 1 coulomb, then W = Z.
Thus, Electrochemical equivalent is the amount of the substance deposited or liberated by 1 ampere current passing for 1 second (i.e. 1 coulomb, I × t = Q)

When the same quantity of electricity is passed through different electrolytes, the amounts of the products obtained at the electrodes are directly proportional to their chemical equivalents or equivalent weights. Thus

AMOUNT OF THE SUBSTANCE ‘m’ LIBERATED OR DEPOSITED AT AN ELECTRODE

COMPARISON OF ELECTROLYTIC AND METALLIC CONDUCTORS

Law is applicable to metallic as well as electrolytic conductors. R is expressed in Ohms also designated as

where r is a constant, called resistivity or specific resistance.
when l = 1 cm and a = 1 cm2 then

The resistance offered by 1 cm3 of the conductor is known as specific resistance.
Units of

It is ease of flow of electric current through the conductor and reciprocal of resistance R.
C =

It is the reciprocal of specific resistance.

EFFECT OF DILUTION ON CONDUCTANCE

The number of current carrying particles or ions per ml decrease on dilution and specific conductivity, being the conductance of one centimetre cube of solution, decreases with dilution.

CELL CONSTANT AND ITS DETERMINATION

is known as cell constant. Its direct measurement is very difficult. It is measured by using standard solution of KCl whose conductivity is known at different concentrations and temperatures.
Hence cell constant =

where V is the volume in cm3 or ml containing 1 gev. of the electrolyte.

EFFECT OF DILUTION ON EQUIVALENT CONDUCTIVITY

Hence conductivity of different electrolytes can only be compared if their solutions have equivalent concentrations.

The conductivity of all the ions produced when 1 mole of an electrolyte is dissolved in V ml of solution is known as molar conductivity.
or
The conductance of a solution containing one gram-mole of electrolyte placed between two large electrodes one centimeter apart.

where V is the volume in cm3 or ml containing 1 mole of the electrolyte.

EFFECT OF DILUTION ON MOLAR CONDUCTIVITY

Since the degree of dissociation of electrolyte increases with dilution,

In case of weak electrolytes, the degree of ionisation increases which increases the value of

, for weak electrolytes is obtained by Kohlrausch law.

at a particular concentration and molar conductivity

at infinite dilution is given by

where b is constant.
It depends upon nature of solvent and temperature.

At infinite dilution the molar conductivity of an electrolyte is the sum of the ionic conductivities of the cations and anions. e.g. for AxBy.

It is important to note that the source of cations (A+) and anions (B–) may be electrolyte itself or any other electrolyte.

The distance travelled by an ion per second under a potential gradient of 1 volt per cm is known as ionic mobility.
Ionic Mobility U =

Other features of the electrochemical cell are

An electrochemical cell of Zinc and copper metals is known as Daniell Cell. It is represented as

By convention cathode is represented on the RHS and anode on the LHS. Two vertical lines represent the salt bridge.

Salt-bridge generally contains solution of strong electrolyte such as KNO3, KCl etc. KCl is preferred because the transport numbers of K+ and Cl– are almost same.

When an electrode is in contact with the solution of its own ions in a half cell, it has a tendency to lose or gain electrons which is known as electrode potential. It is expressed in volts.

The tendency to gain electrons in above case is known as reduction potential.
It is not possible to determine the absolute value of electrode potential. For this a reference electrode is required. The electrode potential is only the difference of potentials between two electrodes that we can measure by combining them to give a complete cell.

The following electrodes are used as reference electrodes for determining the standard reduction potentials.

Standard hydrogen electrode (SHE) also known as Normal Hydrogen Electrode (NHE), consists of platinum wire, carrying platinum foil coated with finely divided platinum black. The wire is sealed into a glass tube, placed in a beaker containing 1M HCl. The hydrogen gas at 1 atm pressure is bubbled through the solution at 298K. Half cell is Pt, H2(1 atm)/H+ (1M)
In SHE, at the surface of platinum, either of the following reactions can take place 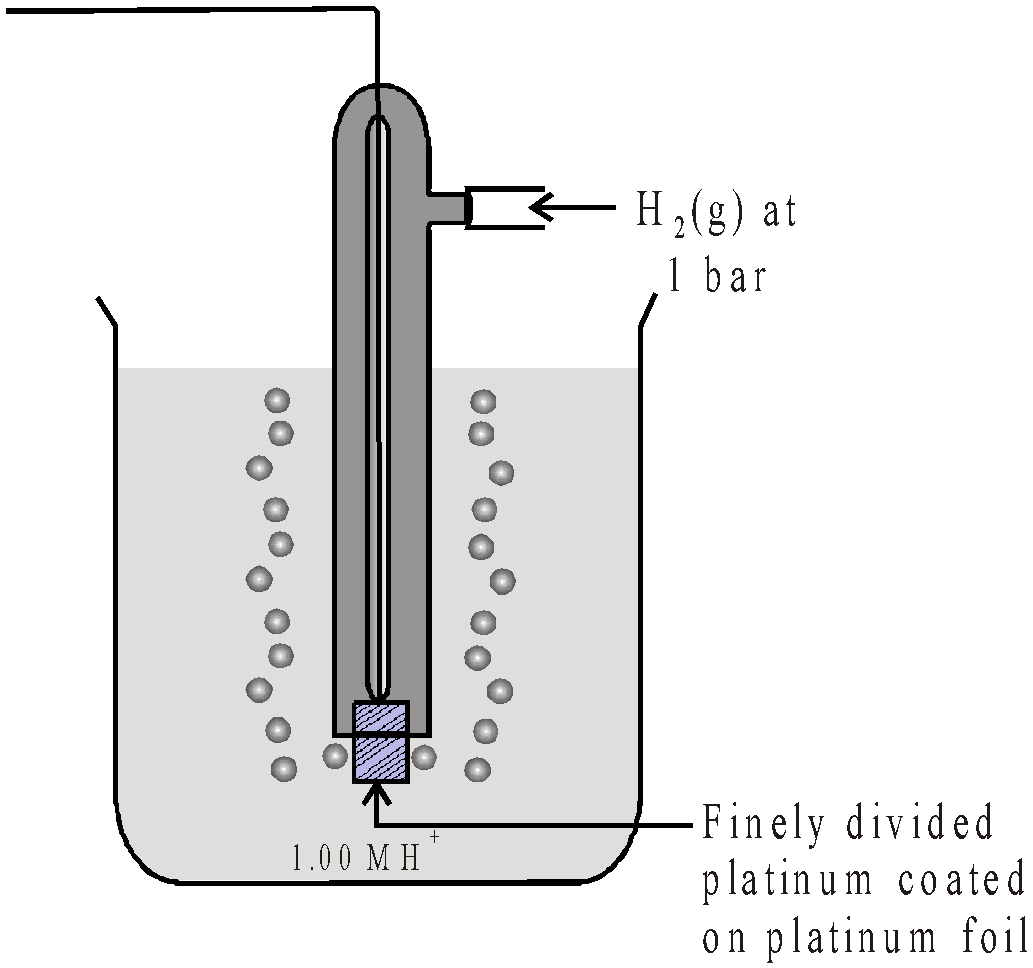 ELECTROMOTIVE FORCE (EMF) OF A CELL

It is the difference between the electrode potentials of two half-cells and cause of flow of current from electrode at higher potential to electrode at lower potential. It is also the measure of free energy change. Standard EMF of a cell

It is the arrangement of electrodes in the increasing order of their Standard Reduction potential .

Eemf = ERHS – ELHS
If the value of e.m.f. is positive the reaction can take place spontaneously, otherwise not.

With the passage of time the electrode potential of the cathode decreases and that of anode increases the difference becomes zero, the driving force of emf becomes zero and reaction stops.

TYPES OF ELECTRODES AND HALF-CELLS

An inert metal such as platinum wire dipped in a solution of ions of the same metal in different oxidation states
Fe3+(aq), Fe2+(aq) / Pt :

The relationship between the concentration of ions and electrode potential is given by Nernst equation.

If we write the electrode reaction, in general, as

The potential of electrode is given by

When Ecell drops to zero the concentration of ions will be equilibrium concentrations. We have for general cell reaction

If n is the number of electrons liberated (or taken up) in a particular cell reaction, then n faradays (nF) of electricity will be generated in the complete reaction. If E is the EMF of the cell, then
Electrical energy supplied by the cell = nFE
According to Gibbs and Helmholtz, the decrease of free energy (–

G) of the reaction occuring in the cell is equal to electrical energy
Hence, –

Two electrodes of different concentrations are dipped in the same solution of electrolyte e.g.

Electrodes are the same but electrolyte solutions have different concentrations e.g.

APPLICATIONS OF THE CONCENTRATION CELLS

The difference between the voltage at which a gas is actually evolved and theoretical value at which it ought to have been evolved during electrolysis is known as overvoltage.

When the cell reaction can be stopped or reversed by applying an emf exactly equal to or infinitesimally greater than that of the cell, it is called reversible cell.

METAL – METAL ION ELECTRODE
Metal rod dipped into a solution of its own ions.

The electrode is reversible with respect to H+ ions
Reaction

Reduction increases the concentration of chloride ions
The electrode is reversible with respect to Cl– ions.
Oxidation :

Reduction increases the concentration of Cl–
OXIDATION – REDUCTION ELECTRODES
Such electrodes are set up by inserting unattackable metal (eg: Platinum) into a solution of ions in different oxidation states. The metal acquires a potential due to tendency of ions in one oxidation state to change into another stable oxidation state.
Electrode reaction :

When the cell reaction cannot be stopped or reversed it is called irreversible cell e.g. cell of Zn and Ag electrodes immersed in solution of H2SO4.

CRITERIA OF THE FORMATION OF PRODUCTS IN ELECTROLYSIS (PREFERENTIAL DISCHARGE THEORY)

Current is carried by Na+ and OH– ions.
Electrolysis of aqueous H2SO4

Although the oxidation potential of OH– is more than Cl– yet Cl2  is formed at anode due to overvoltage.
Electrolysis of aqueous CuSO4 using Pt electrodes

Discharge potential of some ions

SOME COMMERCIAL CELLS AND THEIR TYPES

They are broadly classified into two groups.

It can be recharged and can be used again and again.
LEAD STORAGE BATTERY
Anode : Spongy lead
Cathode : grid of lead packed with PbO2
Electrolyte : 38% H2SO4 by mass
Anode Reaction :

They convert chemical energy into electrical energy and the reactants are continuously fed and products are removed.

Electrodes are made of porous graphite impregnated with catalyst (Pt, Ag or a metal oxide). 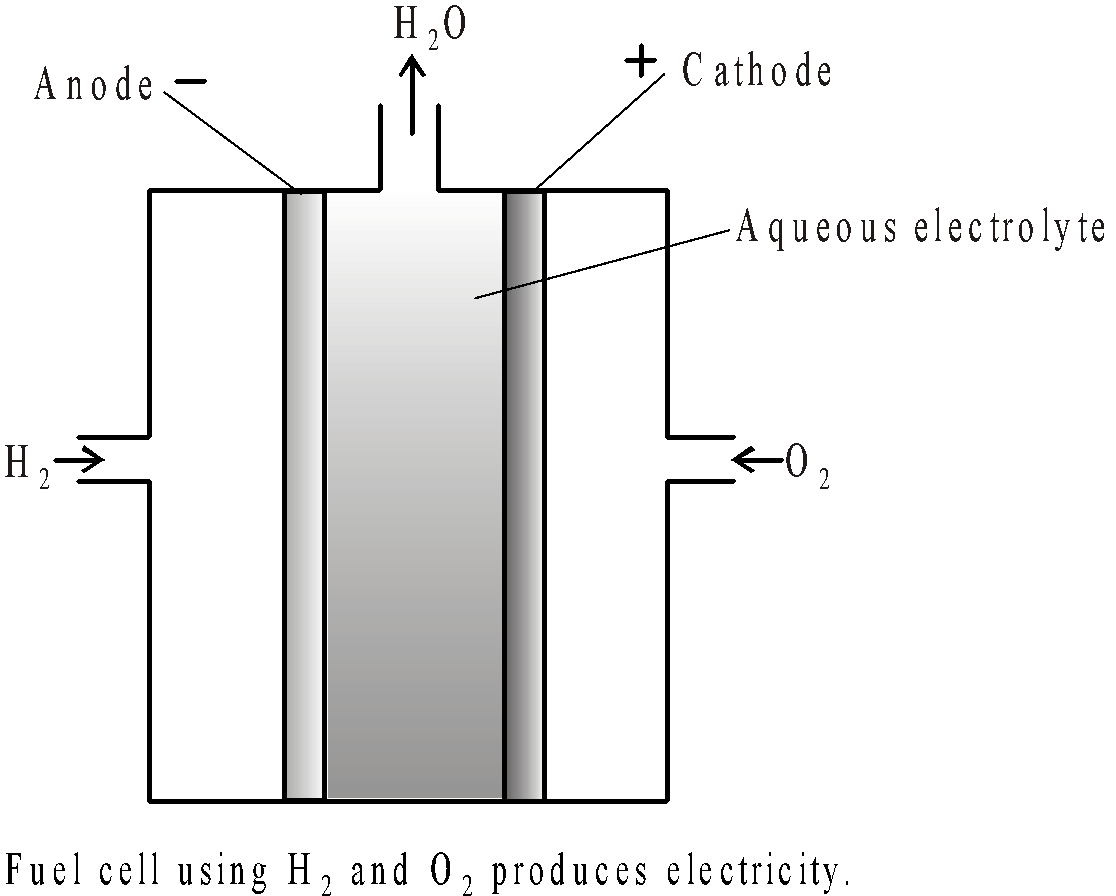 Electrolyte-aqueous solution of KOH or NaOH
Oxygen and hydrogen are continuously fed into the cell.
Oxidation (half-cell  reaction) :

Based upon the combustion of hydrocarbons such as methane, ethane propane etc.
Oxidation (half cell reaction) :

Slow formation of undesirable compounds such as oxides, sulphides or carbonates at the surface of metals by reaction with moisture and other atmospheric gases is known as corrosion.

CALCULATION OF POTENTIAL OF INTERMEDIATE REACTION