John Dalton proposed in 1808 that atom is the smallest indivisible particle of matter.

Originate from cathode. Electrons were discovered by cathode ray experiment.

SOME PROPERTIES OF CATHODE RAYS

Discovered by Goldstein (1886) through perforated cathode rays experiment which showed the presence of anode or canal rays.

Mass : They have mass intermediate of electron and proton.
Discovery : By Yukawa (1935) and Kemmer.

Atom is a sphere of positive electricity with a number of electrons distributed within the sphere.

It is based upon

-particles scattering experiment. Only a few (one in 10,000)

-particles were returned back from the Au-foil (10–4 mm thick).
Conclusion – Atom consists of two parts – (a) Nucleus (b) Extra nuclear part.
Drawbacks – Model fails to explain the stability of the atoms and line spectrum of hydrogen.

The number of protons present in an atom is called the atomic number, denoted by Z. Moseley postulated that the frequency of X-rays produced when beam of strong electrons fall on metal target, called anti-cathode is related to the charge present on the nucleus of an atom of the element used as anti cathode. Mathematically

It is sum of number of protons and neutrons present in the nucleus (nucleons as a whole) and denoted by A. It is always a whole number.

It is the average mass of all existing isotopes and not necessarily a whole number.

Isotopes are atoms of the same element having same atomic number but different mass number. e.g. 8O16, 8O17 and 8O18. They were discovered by Soddy (1911).

According to classical theory of electromagnetism whenever a charge is subjected to an acceleration around an opposite charge, it emits radiations continuously. Therefore the electron while moving around nucleus in circular path must lose energy, go into spiral motion and ultimately fall into the nucleus. Practically it does not happen.

According to Max Planck (1901) radiant energy is emitted or absorbed only in discrete units in form of bundle or packets of energy called photon (quantum). Photon is not a material body. It is massless bundle of energy
Energy associated with each photon (quantum) :E = h

= frequency of radiation (each photon).
c = velocity of light,

= wavelength of radiation.
Thus, a body can radiate energy in multiples of quantum h

where n is an integer.

It is the distance between two neighbouring crests or troughs of wave.

It is the number of waves which pass through a particular point in one second. Unit is Hertz (Hz) or cycles per second. 1 Cps = 1 Hz.

It is the distance travelled by wave in one second. Unit is m sec–1 and denoted by c.
c =

It is the number of wavelengths per cm. It is equal to the inverse of wavelength. Unit is cm–1 and is denoted by

It is the height of crest or trough. Square of amplitude determines the amount of energy carried by the wave.

Atoms of different elements emit electromagnetic radiations of definite frequencies when excited by heating, passing current or electric discharge. Arrangement of these radiations in decreasing order of frequencies is called atomic spectrum.

Phenomenon of splitting of beam of light into radiations of different frequencies after passing through a prism is called dispersion.

It is obtained by passing sunlight (white light) through a prism. The light is dispersed or resolved into continuous spectra of colours from Violet to Red. It contains radiations of all the frequencies.

It is an atomic spectrum of an element which consists of a number of bright lines separated by dark bands. Atomic Spectra of most elements is line spectrum.

It is obtained by passing white light through solutions or vapours of chemical substance and then is analysed by spectroscope. It has few dark lines in otherwise continuous spectrum.

It is obtained by passing radiations from the atoms through prism. It has few bright lines against a dark background.

Wavelength of line in spectrum is given by the expression

also for hydrogen  where

Phenomenon of ejection of electrons from the surface of a metal when light of suitable frequency strikes on it is called photoelectric effect.
If

0 is the threshold frequency and

the frequency of incident light then

0 of the medium . The numerical value of permitivity factor is 4

cm/sec.
The velocity of electron in first orbit of hydrogen is

of the velocity of light.

In SI system the charge e is replaced by

It was developed independently by Warner Heisenberg and Erwin Schrodinges and takes into account the dual behaviour (particle and wave nature) of matter proposed by de Broglie.
Planck’s Quantum theory successfully explains.

Confirms the wave nature of electrons.

“It is not possible to determine simultaneously the position and momentum of small moving sub-atomic e.g., particle

, such as electron with entire certainty”.
where, x = uncertainity in position

is amplitude of electron wave and is also called wave function. x, y, z, are space coordinates, m is mass of electron, h is Planck’s constant, E is total energy and V is potential energy of the electron.

Orbitals are the regions in space around nucleus where probability of finding the electron is maximum.

Angular momentum of an electron in any orbit, mvr 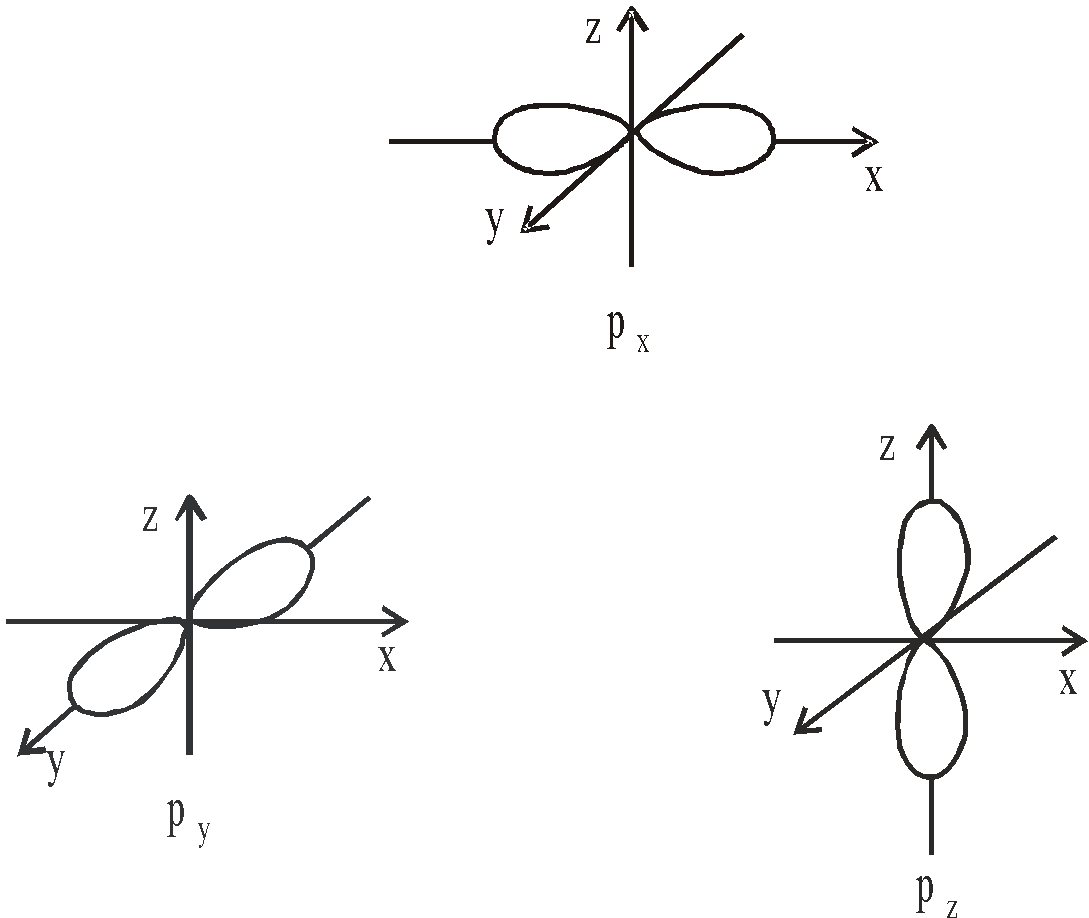 No two electrons in an atom can have same values for all the four quantum numbers.
Maximum number of electrons in a sub shell is equal to

Note : Maximum numbers of electrons in an orbital = 2

The pairing of electrons in orbitals of a subshell does not take place until all orbitals of sub shell are singly occupied.

The electron density is directly proportional to

. The larger the value of

more is the probability of finding the electrons. Schrodinger wave equation may be separated into a product of three functions dependent on

R (r) = Radial wave function, it may be 0, or
R2 = Radial density in per unit volume of spherical shell.
It is always positive.

Radial probability. It is defined as maximum density of electrons in the volume of spherical shell having small thickness dr.
Note :

is the volume of spherical shell having small thickness dr.

. Hence there are more chances for finding the electrons along the axes for p orbitals.

It states that the wave number

(reciprocal of wavelength) of any line in hydrogen spectrum of a particular series can be represented as a difference of two terms, one of which is constant and other varies throughout the series. Mathematically,  .

The decrease in energy (or increase in wavelength) of X-rays after the scattering from the surface of carbon or light element is known as Compton effect.
Prev Online Test Series 2-NCERT Based – Some Basic Concepts of Chemistry
Next Online Test Series 1 -NEET & AIIMS Past Years based -Atomic Structure