In 1802 Gian Domenico Romagnosi, an Italian lawyer and judge, found that a steady electric current flowing in wire affected a magnetic needle placed near it. He published his observation in a local newspaper (called Gazzetta di Trentino). But nobody noticed this phenomenon.
In 1820 Hans Christian Oersted (a Danish Physicist) rediscovered this phenomenon. He noted that a magnetic compass needle, brought close to a straight wire carrying a steady electric current, aligned itself perpendicular to the wire i.e., the direction of magnetic field is tangential to a circle which has the wire as centre, and which has its plane perpendicular to the wire (Fig 1-a).
Oersted also noticed that on reversing the direction of current; the direction of magnetic field is reversed.

It is a region of space around a magnet or current carrying conductor or a moving charge in which its magnetic effect can be felt.
The conductor carrying current is electrically neutral but a magnetic field is associated with it.
The SI unit of magnetic field induction is tesla (T) or weber/m2 and cgs unit is gauss. 1 gauss = 10–4 T
Comparison between electric field and magnetic field 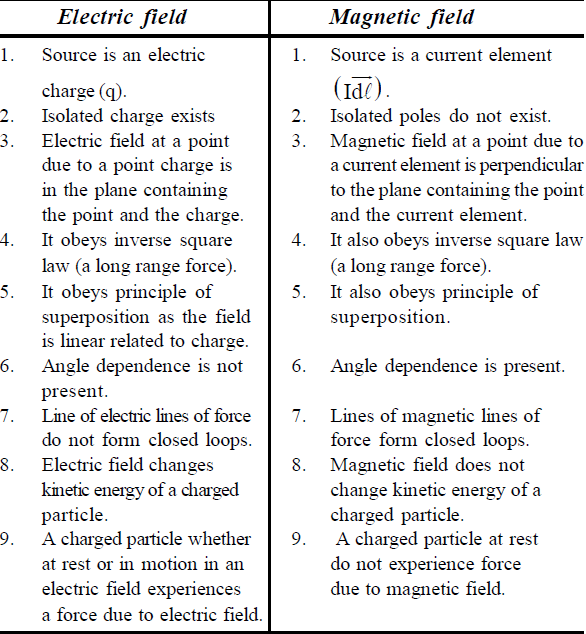 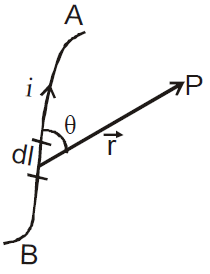 is  perpendicular to both

, governed by the right hand thumb rule of the cross-product of

.
The magnetic fields going into the page and coming out of the page are represented as follows :

(Pointing into the plane of paper)

MAGNETIC FIELD NEAR THE END OF A FINITE SIZED CONDUCTOR 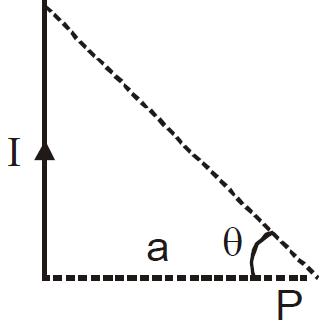 MAGNETIC FIELD DUE TO AN INFINITELY LONG CONDUCTOR

ELUCIDATION
Magnetic field in the case of infinitely long wire 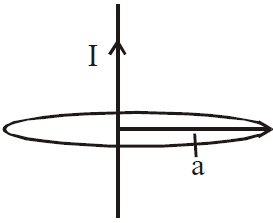 MAGNETIC FIELD NEAR THE END OF A LONG CONDUCTOR 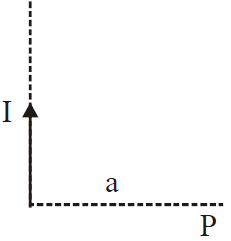 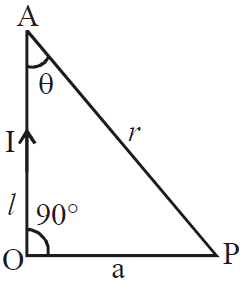 MAGNETIC FIELD DUE TO A CURRENT CARRYING COIL

MAGNETIC FIELD AT A POINT ON THE AXIS OF SYMMETRY OF A CIRCULAR COIL, AT A DISTANCE “X” FROM ITS CENTRE

N =  total number of turns
a = coil radius
The direction of 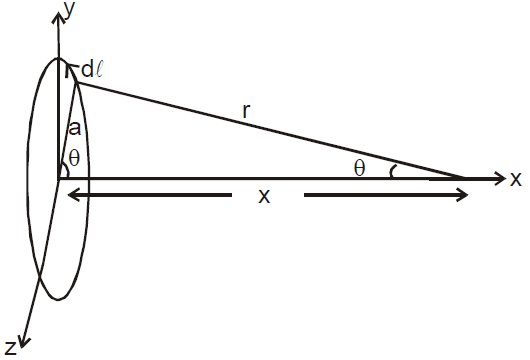 Let for a particular angle, position of small length element dl is given by its coordinates as 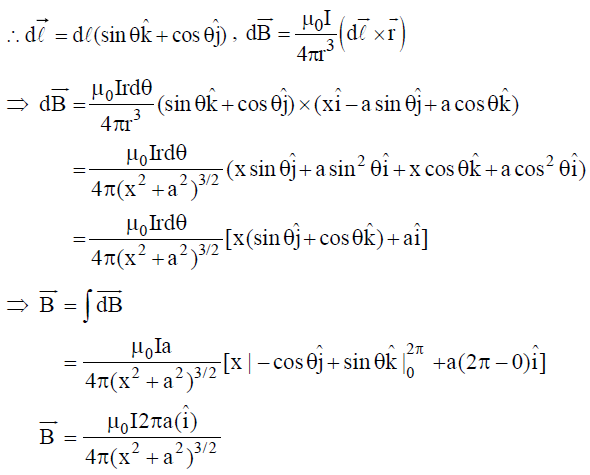 ,
If number of turns of coil are N, then

MAGNETIC FIELD AT THE CENTRE OF A CIRCULAR ARC CARRYING CURRENT

where θ is in radian.
In this case the direction of magnetic field is into the page.

n is the number of turns per unit length of solenoid.

The line integral of magnetic field across a closed loop is equal to 40 times the net correct inside the loop
i.e.

where I  is the net current inside the loop.
KEEP IN MEMORY 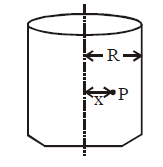 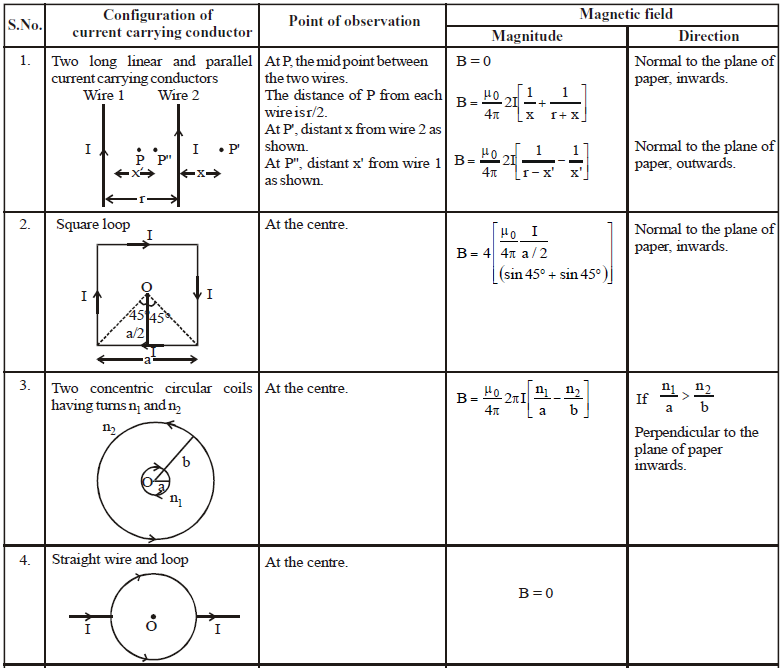 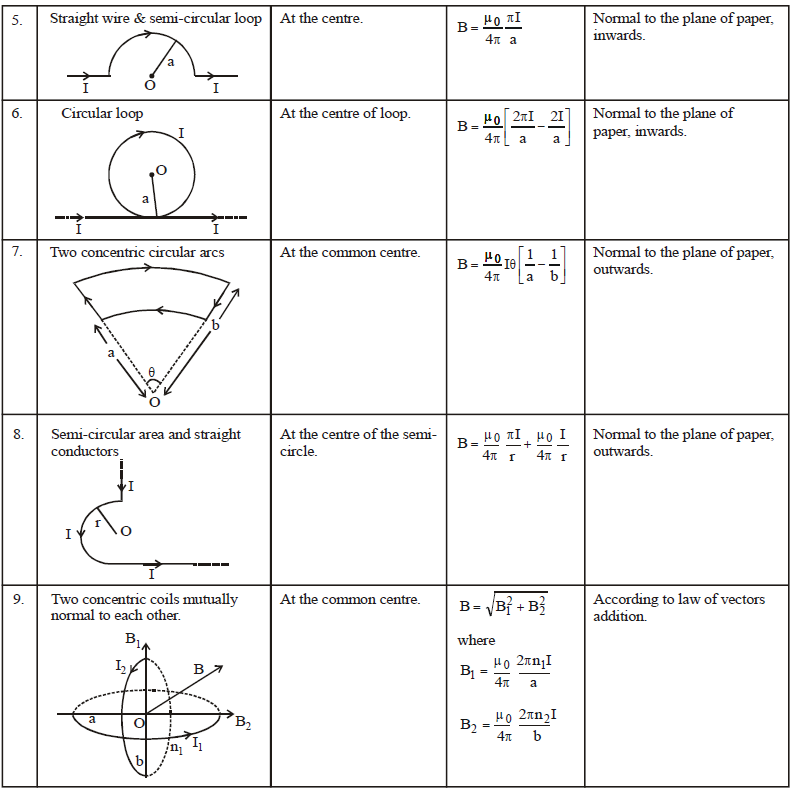 FORCE ON A CONDUCTOR

TORQUE ON A COIL

The torque acting on a rectangular coil placed with its plane parallel to a uniform magnetic field of flux density B is given by
τ = BINA
where N is the number of turns in the coil, A is the area and I is the current.
If the plane of the coil makes an angle α with the direction of the field, then
τ = BINA cos α

,
where θ is the angle between 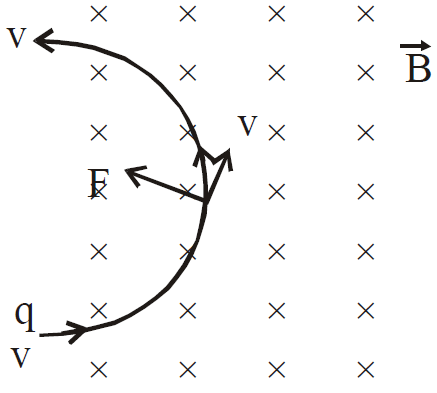 where r is the radius of the circular path.
It is important to note that this force cannot change the speed of the charged particle and hence its kinetic energy. But it changes the velocity of charged particle (due to change in direction) and hence also causes a change in momentum. Also the work done by the force is zero as the force is acting perpendicular to the direction of motion.
Case (iii)
If θ = α is any other angle then the path taken is helical. The velocity of the charged particle can be split into two parts for better understanding.

This acts as the centripetal force and moves the particle in a circular path.
The combined effect of these two is a helical path.
A charged particle entering a uniform magnetic field at an angle executes helical path.
Radius of the helix,

Pitch of the helix =

:We can use the rule of cross product. The direction of

is perpendicular to the plane containing

can be found by right hand thumb rule. It is important to note that if q is positive, we will get the correct direction of

When a current flows in a conductor, the free charges (electrons in case of a metal wire) move. Each free charge movement generates a force which adds up to give the force on the conductor.
Force between infinitely long conductors placed parallel to each other at distance d.

, the force experienced by it is given by

Torque on a current loop in uniform magnetic field

is the magnetic moment of coil.

is the unit vector normal to the plane of the loop.
KEEP IN MEMORY 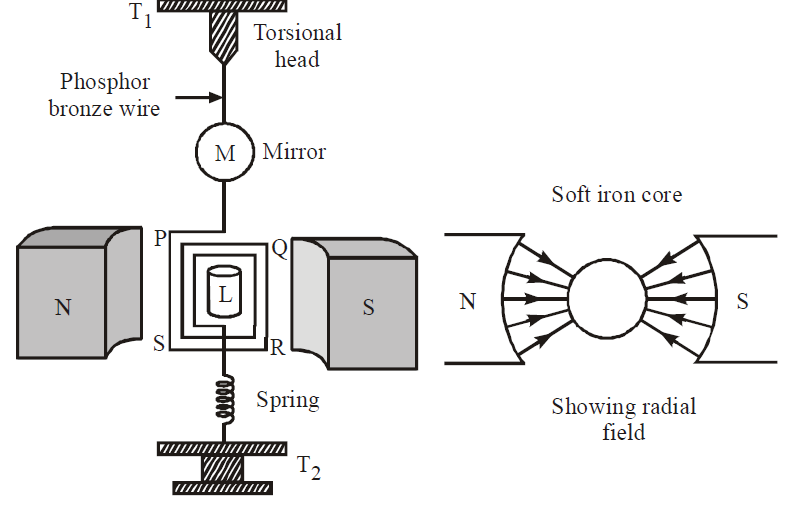 It essentially consists of a rectangular coil PQRS or a cylindrical coil of large number of turns of fine insulated wire wound over a non-conducting frame of ivory or bamboo. This coil is suspended by means of phosphor bronze wire between the pole pieces of a powerful horseshoe magnet NS. The poles of the magnet are curved to make the field radial. The lower end of the coil, is attached to a spring of phosphor-bronze wire. The spring and the free ends of phosphor bronze wire are joined to two terminals T2 and T1 respectively on the top of the case of the instrument. L is a soft iron core. A small mirror M is attached on the suspension wire. Using lamp and scale arrangement, the deflection of the coil can be recorded. The whole arrangement is enclosed in a non-metallic case.
THEORY
Let the coil be suspended freely in the magnetic field.
Suppose, n = number of turns in the coil
A = area of the  coil
B = magnetic field induction of radial magnetic field in which the coil is suspended.
Here, the magnetic field is radial, i.e.,  the plane of the coil always remains parallel to the direction of magnetic field, and hence the torque acting on the coil
τ = niAB … (1)
Due to this torque, the coil rotates. As a result, the suspension wire gets twisted. Now a restoring torque is developed in the suspension wire. The coil will rotate till the deflecting torque acting on the coil due to flow of current through it is balanced by the restoring torque developed in the suspension wire due to twisting. Let C be the restoring couple for unit twist in the suspension wire and θ be the angle through which the coil has turned. The couple for this twist θ is Cθ.
In equilibrium, deflecting couple = restoring couple
∴   ni AB = Cθ  or i = Cθ/ (nAB)
or i = Kθ (where C/nAB = K) … (2)
K is a constant for galvanometer and is known as galvanometer constant.
Hence

,
If R be the resistance of the galvanometer and a current is passed through it, then V = iR
∴ Voltage sensitivity, Vs =

The SI. unit of voltage sensitivity is radian per ampere or deflection per ampere.
Conditions for sensitivity : A galvanometer is said to be more sensitive if it shows a large deflection even for a small value of current.
We know that,
For a given value of i, θ will be large if (i) n is large, (ii) A is large, (iii) B is large, and (iv) C is small.
Regarding above factors, n and A cannot be increased beyond a certain limit. By increasing n, the  resistance of the galvanometer will increase and by increasing A, the size of the galvanometer will increase. So, the sensitivity will decrease. Therefore, B is increased. The value of B can be increased by using strong horseshoe magnet. Further, the value of C can be decreased. The value of C for quartz and phosphor-bronze is very small. So, the suspension wire of quartz or phosphor-bronze is used. The value of C is further decreased if the wire is hammered into a flat strip.

When a current passes through a slab of material in the presence of a transverse magnetic field, a small potential difference is established in a direction perpendicular to both, the current flow and the magnetic field. This effect is called Hall effect.
The voltage thus developed is called Hall voltage.

acts in the downwards direction.
Now there may be two cases:
Case I : If the charge particles are negatively charged, then these negative charges will accumulate at the point P2 and therefore P2 will be at lower potential than P1.
Case II : If the charged particles are positively charged, then the point P2 will be at higher potential than P1.
Magnitude of hall voltage :
Let w be width and A be the cross-sectional area of the conductor. If e is magnitude of charge or the current carrier (electron or hole).
The force on the current carrier due to magnetic field  B,
Fm = Bevd
Here, vd is drift velocity of the current carries.
Due to the force Fm, the opposite charges build up at the points P1 and P2 of the conductor.
If VH is Hall voltage developed across the two faces, then the strength of electric field due to Hall voltage is given by
EH =

.
Here   w = P1P2.
This electric field exerts an electric force on the current carries in a direction opposite to that of magnetic force.
The magnitude of this force is

In equilibrium condition,   Fe = Fm,
or

Now, drift velocity of current carrier is given by,     vd =

where n is the number of current carries per unit volume of the strip.
Hall resistance

KEEP IN MEMORY
Hall effect can determine nature of current (charge) carriers in the material. i.e. whether the charge is +ve or –ve.
Hall voltage

where n is the density of charge carriers

b = thickness of plate,
B = magnetic field,
I  = current flowing through plate,
A = area of cross-section of plates
Prev Online Test Series 3: Daily Practice Papers – Current Electricity
Next Online Test Series 1 -NEET & AIIMS Past Years based -Moving Charges and Magnetism