Direct current (D.C.) is that current which may or may not change in magnitude but it does not change its direction.

ADVANTAGES OF A.C. OVER D.C.

The average value of AC over one full cycle is zero since there are equal positive and negative half cycles.
The average current for half cycle is 2I0 /π where I0 is the peak value of current.
The root mean square (rms) value of AC is

where I0 is the peak or maximum value of alternating current.
The rms value of alternating current can also be defined as the direct current which produces the same heating effect in a given resistor in a given time as is produced by the given A.C. flowing through same resistor for the same time. Due to this reason the rms value of current is also known as effective or virtual value of current.
∴

and  e = e0 sin ωt,
the current leads the emf by an angle

As already pointed out that in an ac circuit the current and applied emfs are not necessarily in same phase. The applied emf (E) and current produced (I) may be expressed as
E = E0 sin ωt  and I = I0 sin (ωt + φ) with I0 = E0 / Z
where E0 and I 0 are peak values of alternating emf and current.

, where I0 = E0/R
Comparing this with standard equation, we get that impedance of circuit, Z = R and phase difference between current & emf = 0.
Hence we conclude that in a purely resistive ac circuit the current and voltage are in same phase and impedance of circuit is equal to the ohmic resistance.
Phasor diagram :

Graph of emf or current versus ωt :

Comparing this with standard equation, we get
Z = ω L and phase difference φ = π/2.
Hence we conclude that in a purely inductive circuit the current lags behind the applied voltage by an angle π/2 and the impedance to the circuit is ωL and this is called as inductive reactance.
Graph of emf or current versus ωt

Graph between XL and f

Then the current through capacitor is given by,

Graph between XC and f

Hence we conclude that in a purely capacitive circuit the current leads the applied emf by an angle π/2 and the impedance of the circuit is 1/ωC and this is known as capacitive reactance.

From phasor diagram, resultant voltage is given by,

where XL = ωL
It is obvious that the current lags behind the emf by angle φ given by,

From phasor diagram the resultant emf is given by

Let I be the current flowing in circuit, VL the potential difference across inductance L and VC the p.d. across capacitance C.
Phasor diagram

The current leads applied emf by

At certain frequency the impedance of the circuit is minimum and the current is maximum.
This frequency is called the resonant frequency.

Let I be the current flowing in circuit. VR, VL and VC are respective potential differences across resistance R, inductance L and capacitance C.
Phasor diagram

The phase leads of current over applied emf is given by

It is concluded that : 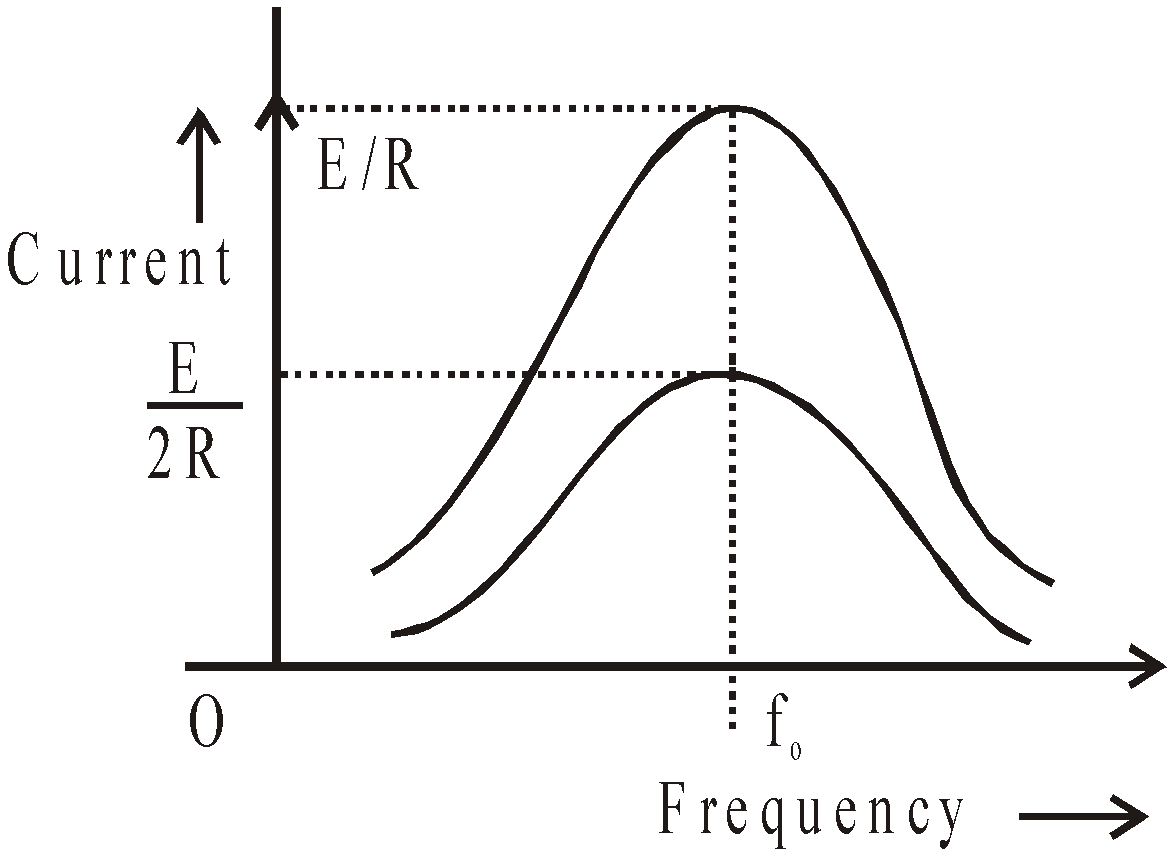 Thus the resonant frequency depends on the product of L and C and is independent of R.
At resonance, impedance is minimum, Zmin = R and current is maximum 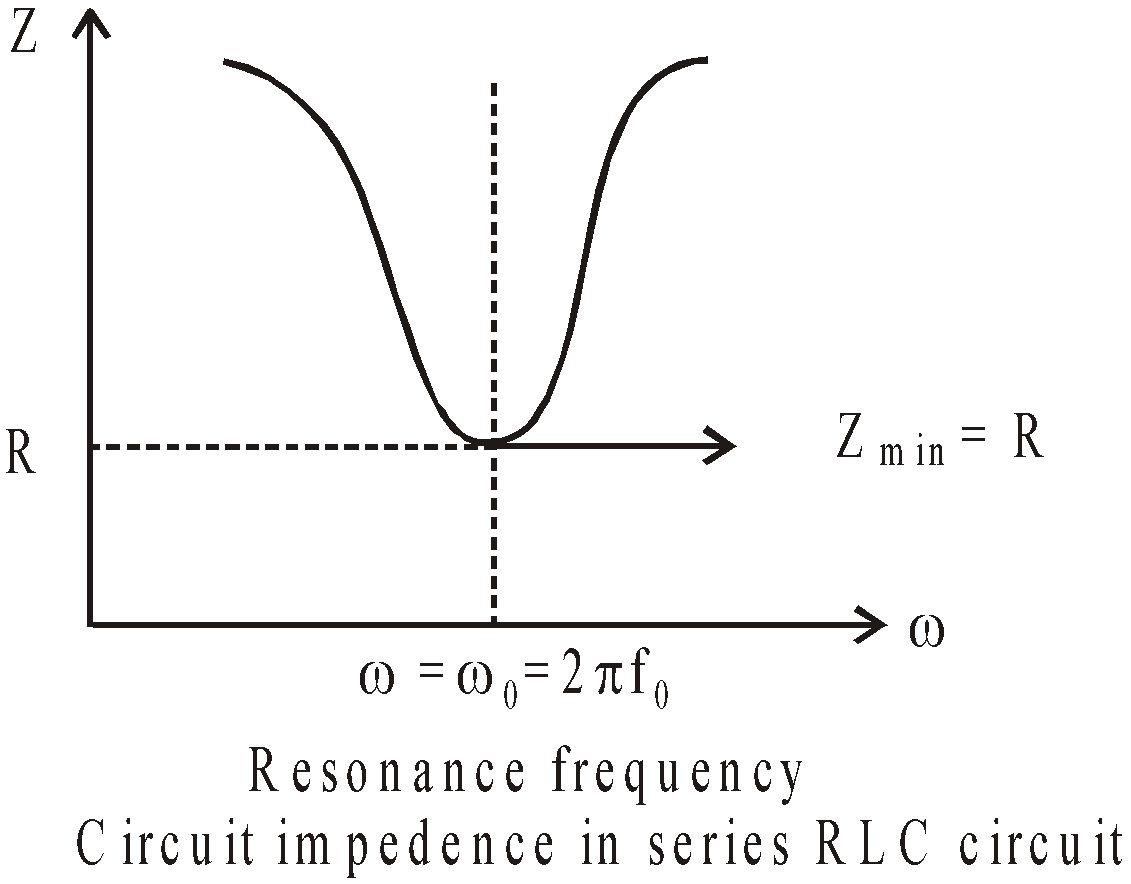 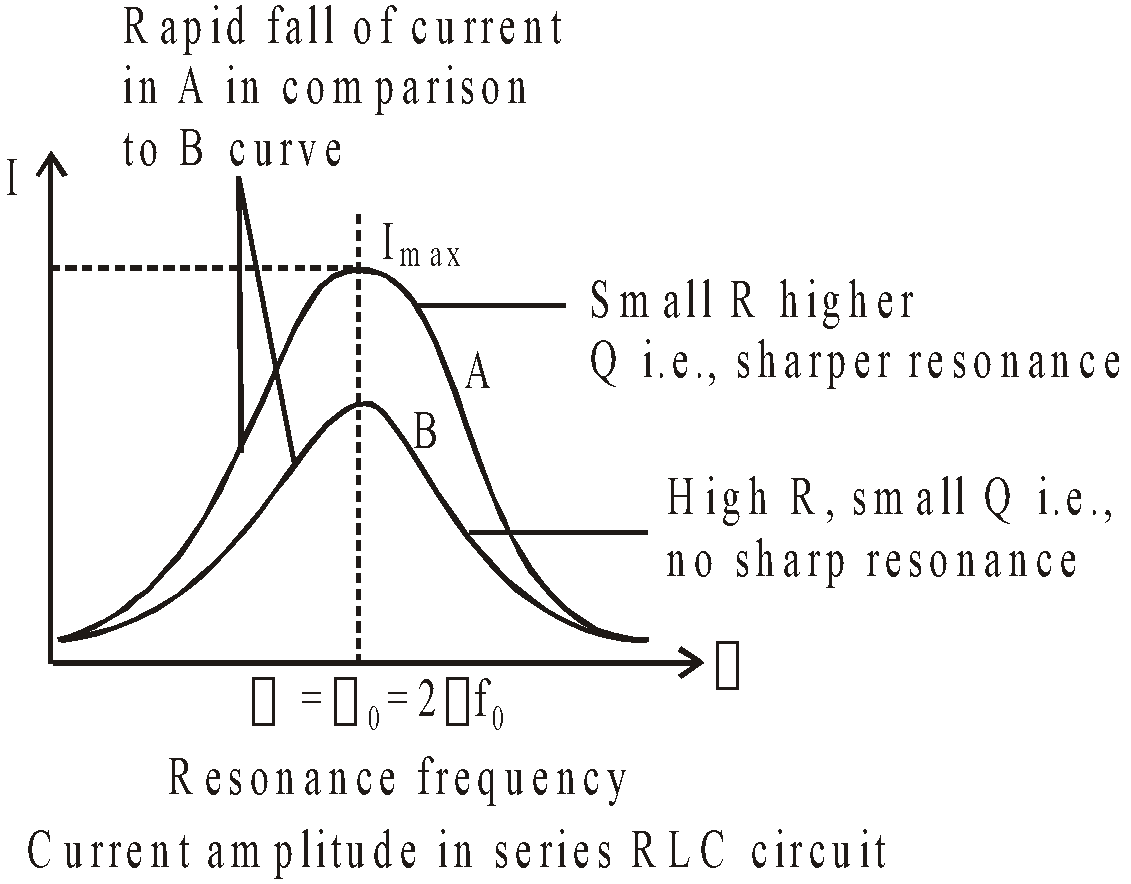 It is interesting to note that before resonance the current leads the applied emf, at resonance it is in phase, and after resonance it lags behind the emf. LCR series circuit is also called as acceptor circuit and parallel LCR circuit is called rejector circuit.
COMMON DEFAULT
🗴 Incorrect. Adding impedances / reactances /resistors algebraically.
✓ Correct. For these physical quantities, vector addition must be done
🗴 Incorrect. Kirchhoff’s laws are applicable in D.C. circuit only
✓ Correct. Kirchhoff’s laws are applicable in A.C. circuit also (which may include inductor and capacitor).

A parallel resonant circuit consists of an inductance L and a capacitance C in parallel as shown in fig.

The condition of resonance is again that the current and applied emf must be in same phase. The condition gives angular resonant frequency.

The impedance at resonance,

In parallel resonant circuit the impedance is maximum and the current is minimum.
If

.
Q – Factor
The sharpness of tuning at resonance is measured byQ-factor or quality factor of the circuit and is given by

Higher the value of Q-factor, sharper is the resonance i.e. more rapid is the fall of current from maximum value (I0) with slight change in frequency from the resonance value.
It is clear from the figure that at low value of θ, the resonance is poor. However the bandwidth increases

The figure given below explains the concept of bandwidth and cut-off frequency.

Bandwidth : It is the band of allowed frequencies and is defined as the difference between upper and lower cut-off frequencies, the frequency at which power becomes half of maximum value and current becomes

POWER IN AN A.C. CIRCUIT

The power is defined as the rate at which work is being done in the circuit. In ac circuit, the current and emf are not necessarily in the same phase, therefore we write
E = E0 sin ωt  & I = I0 sin (ωt + φ).
The instantaneous power, P = EI
= E0 sin ωt I0 sin (ωt + φ),
The average power Pav = Erms Irms cos φ
∴

In this expression cos φ is known as power factor. The value of cos φ depends on the nature of the circuit. For L, C and L-C circuit, the power factor is zero ( φ = 90º); for R-circuit cos φ = 1 ( φ = 0) and for all other circuit cos φ  = R/Z, where Z = impedance.
If R = 0, cos φ = 0 and Pav = 0 i.e., in a circuit with no resistance, the power loss is zero. Such a circuit is called the wattless circuit and the current flowing is called the wattless current.
Power is of two types

Half Power Points
The values of ω at which the average power is half of its maximum value (at resonant frequency) are called half power points. 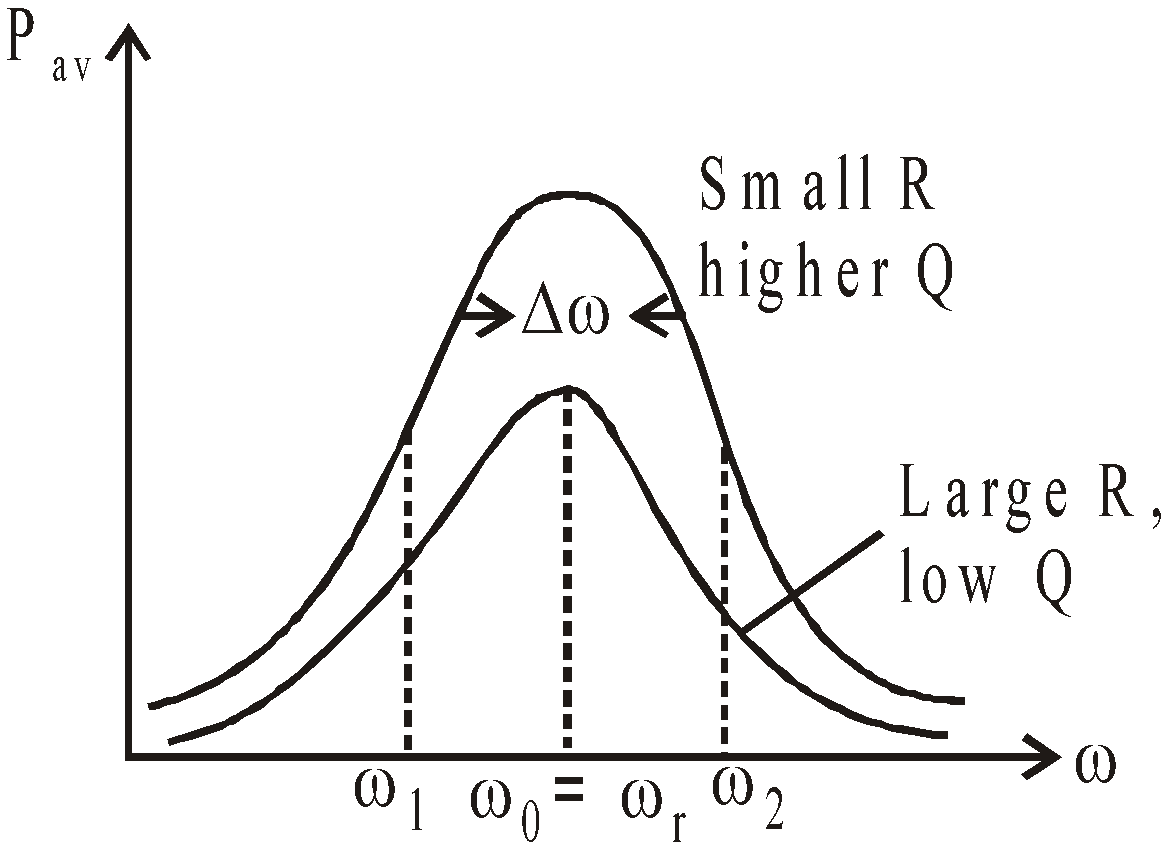 In concise term, we can write as,

When the key in a D.C. circuit (containing a D.C. source of emf, inductance coil, resistance and capacitor) is closed or opened, the current in the circuit varies. This is known as varying current as it varies w.r.t. time and takes a final value after a short while.

so if rate of change of current with time =

then due to phenomenon of self induction, induced emf across inductance

Potential difference across the resistance = IR
During growth of current in L-R circuit, if we applying Kirchhoff’s loop rule then

On solving it we get the value of current at any time t during growth of current in LR-circuit. 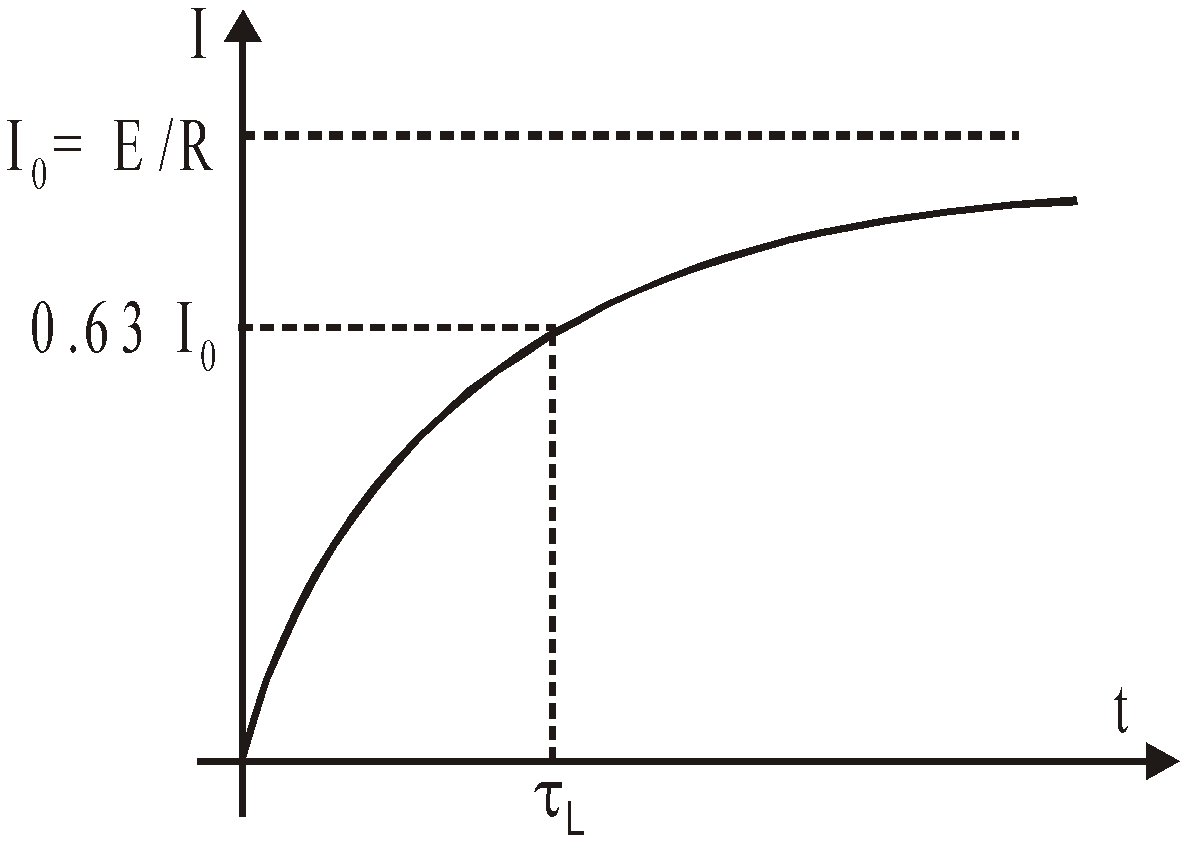 has dimensions of time. It is called inductive time constant of LR-circuit.
At t =

Initially, an inductor acts to oppose changes in the current through it. A long time later, it acts like ordinary connecting wire.

Let the current has reached its steady state value Ι0 through inductor. Now switch K in the circuit shown in fig. has been closed.

The eqn. gives the value of current at any time t during decay of current in LR-circuit. 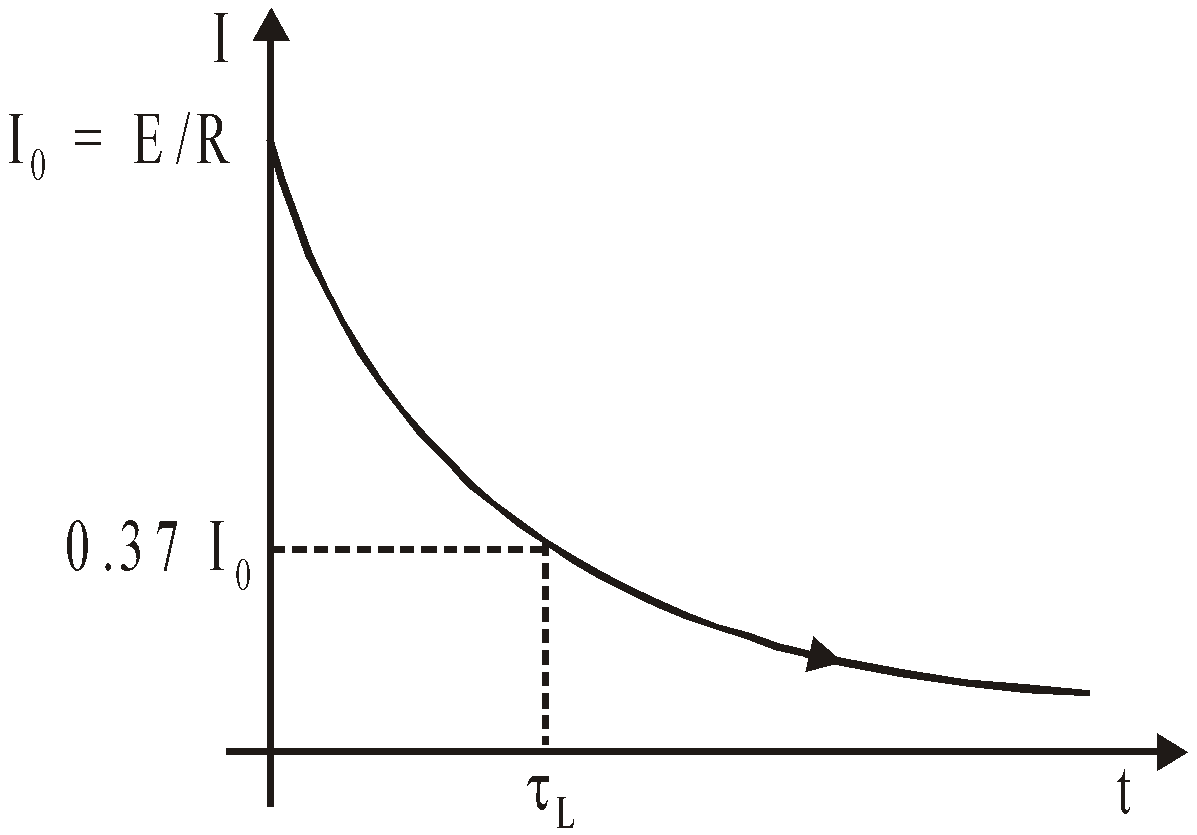 in equation, we get 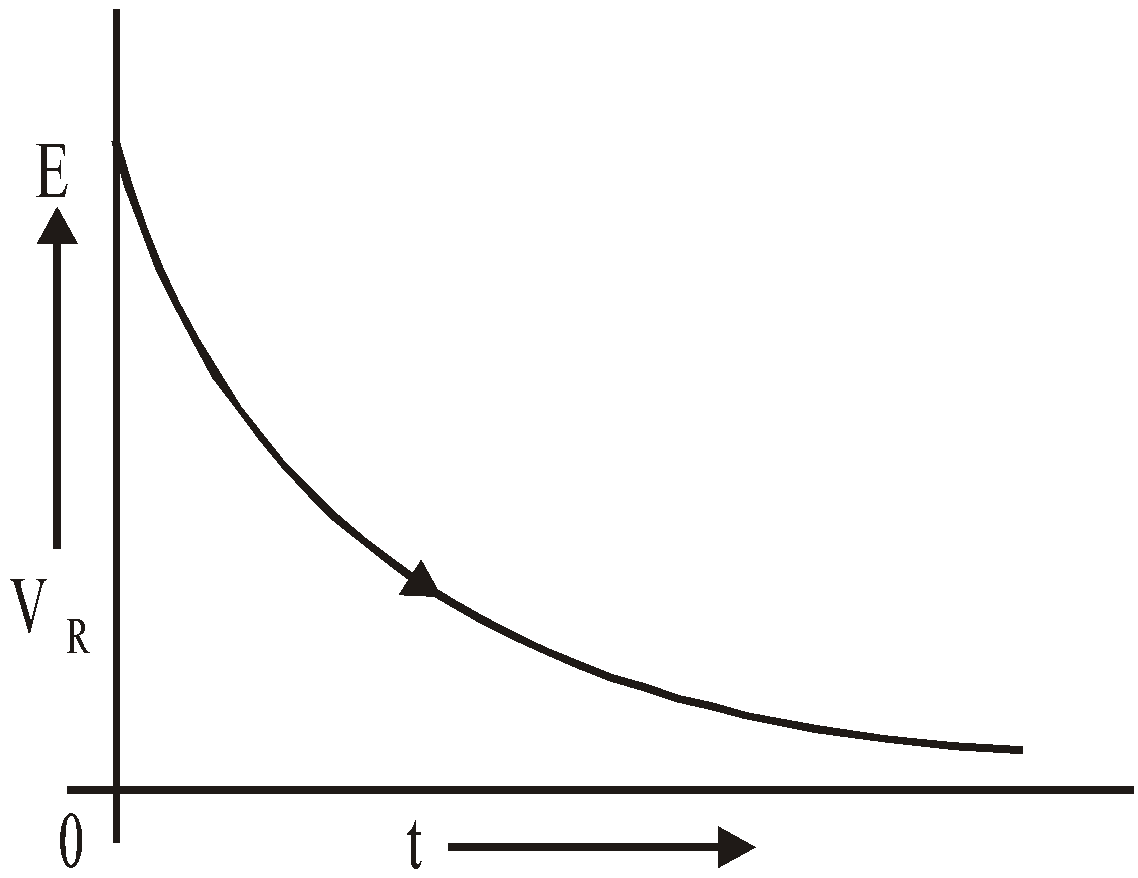 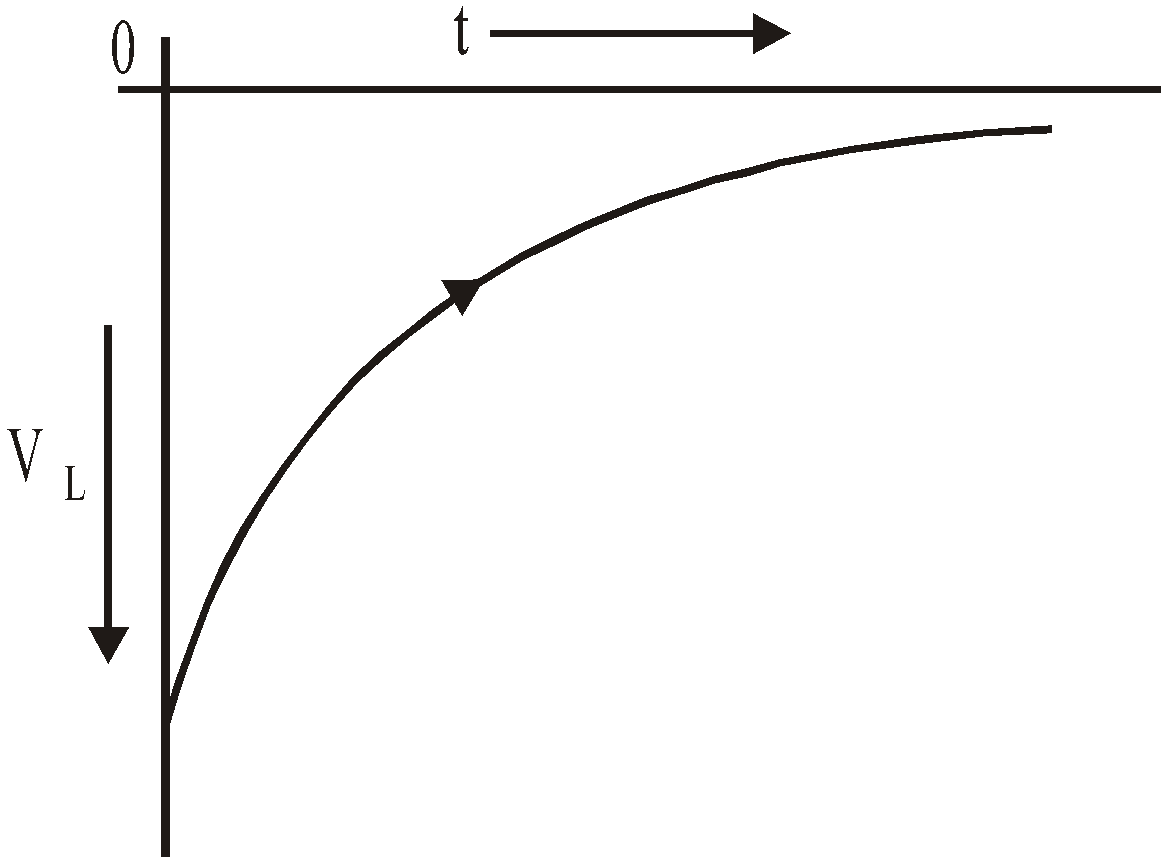 If a charged capacitor C is short-circuited through an inductor L, the charge and current in the circuit start oscillating simple harmonically. If the resistance of the circuit is zero, no energy is dissipated as heat. Assume an idealized situation in which energy is not radiated away from the circuit. With these idealizations-zero resistance and no radiation, the oscillations in the circuit persist indefinitely and the energy is transferred from the capacitor’s electric field to the inductor’s magnetic field back and forth. The total energy associated with the circuit is constant. This is analogous to the transfer of energy in an oscillating mechanical system from potential energy to kinetic energy and back, with constant total energy.
Let us now derive an equation for the oscillations in an L-C circuit.

…(i)
Now, as the charge is decreasing,

value of in equation (i), we get

…(ii)
This is the standard equation of simple harmonic motion

…(iii)
The general solution of equation (ii),
is

In case φ = 0 as q = q0 at t = 0.
Thus, we can say that charge in the circuit oscillates with angular frequency given by equation (iii). Thus, in L-C oscillations, q, i and

all oscillate harmonically with same angular frequency ω. But the phase difference between q and i or between i and

A transformer is a device for converting high voltage into low voltage and vice versa, without change in power.
There are two types of transformers.
The principle of a transformer is based on mutual induction and a transformer always works on AC. The input is applied across primary terminals and output is obtained across secondary terminals.
The ratio of number of turns in secondary and primary is called the turn ratio
i.e.,

= turn ratio K.
If EP and ES are alternating voltages, IP and IS the alternating currents across primary and secondary terminals
respectively then,

POWER LOSSES IN A TRANSFORMER

Inspite of all these losses, we have transformers with efficiency of 70% – 90%.
Prev Online Test Series 3: Daily Practice Papers – Electromagnetic Induction
Next Online Test Series 1 -NEET & AIIMS Past Years based -Alternating Current