Reflection of light, spherical mirrors, mirror formula. Refraction of light, total internal reflection and its applications optical fibres, refraction at spherical surfaces, lenses, thin lens formula, lens-maker’s formula. Magnification, power of a lens, combination of thin lenses in contact combination of a lens and a mirror. Refraction and dispersion of light through a prism.Scattering of light- blue colour of the sky and reddish appearance of the sun at sunrise and sunset.Optical instruments: Human eye, image formation and accommodation, correction of eye defects (myopia and hypermetropia) using lenses. Microscopes and astronomical telescopes (reflecting and refracting) and their magnifying powers.

It is the turning back of light in the same medium. 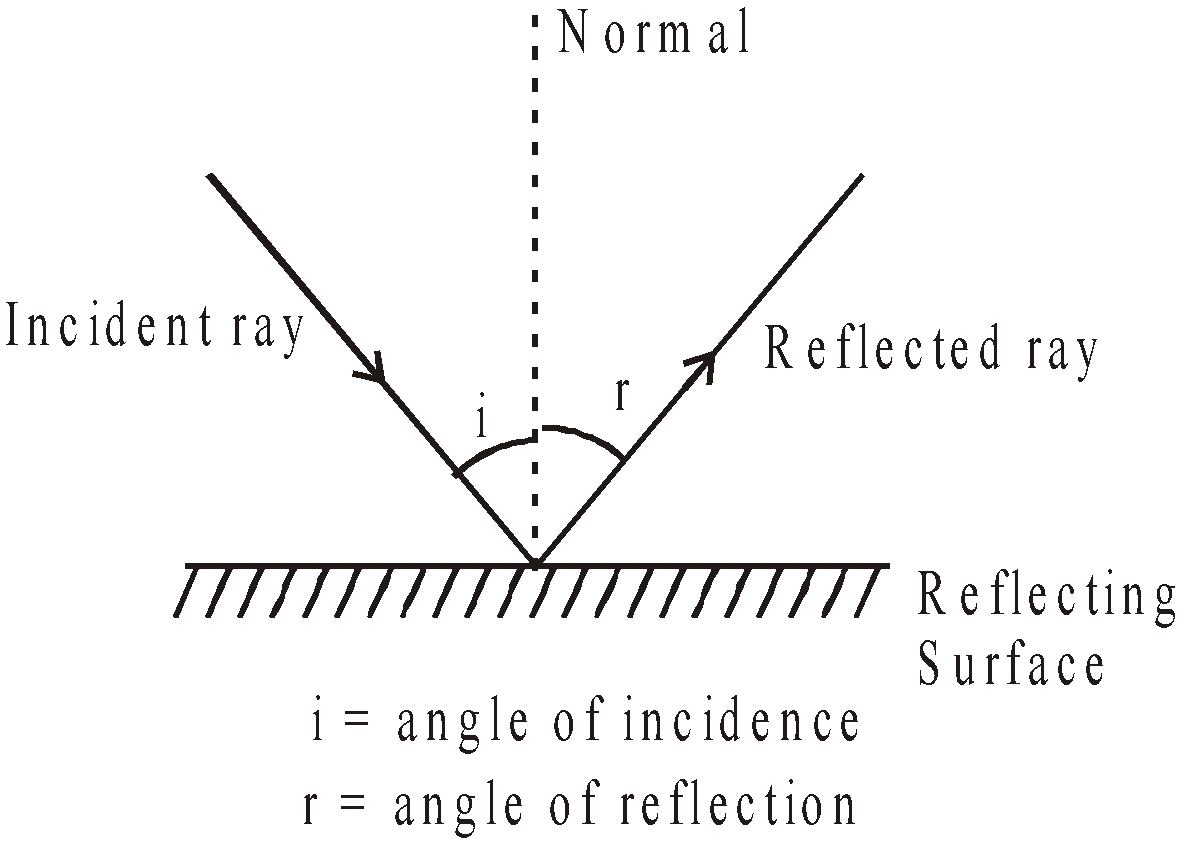 Plane mirror has infinitely large radius of curvature. It produces virtual image of same size but laterally inverted. Image is as much behind the mirror as much is the object in front of it. 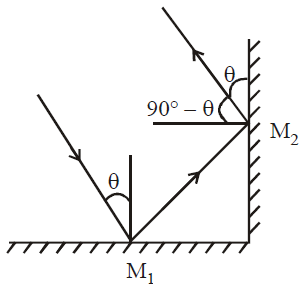 Note:- A plane mirror always forms a virtual image if object is real and forms a real image if the object is virtual. 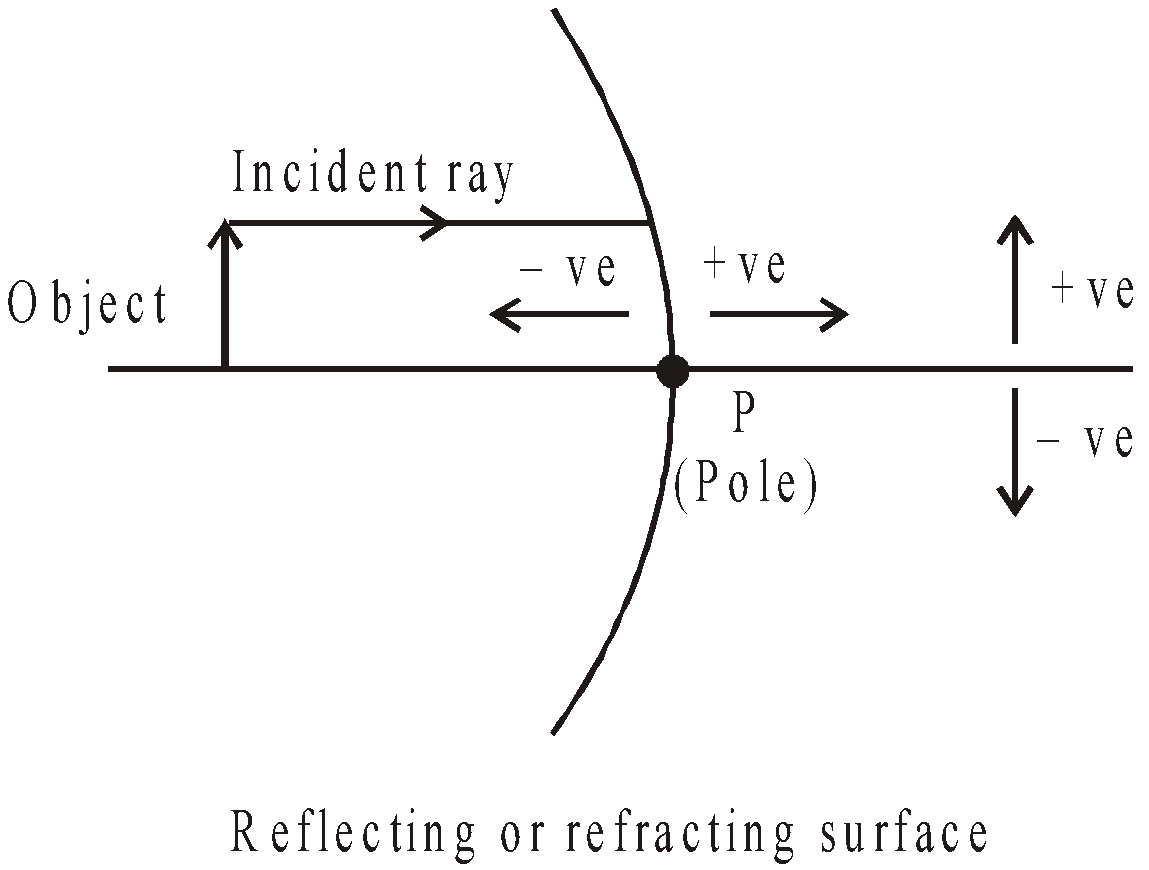 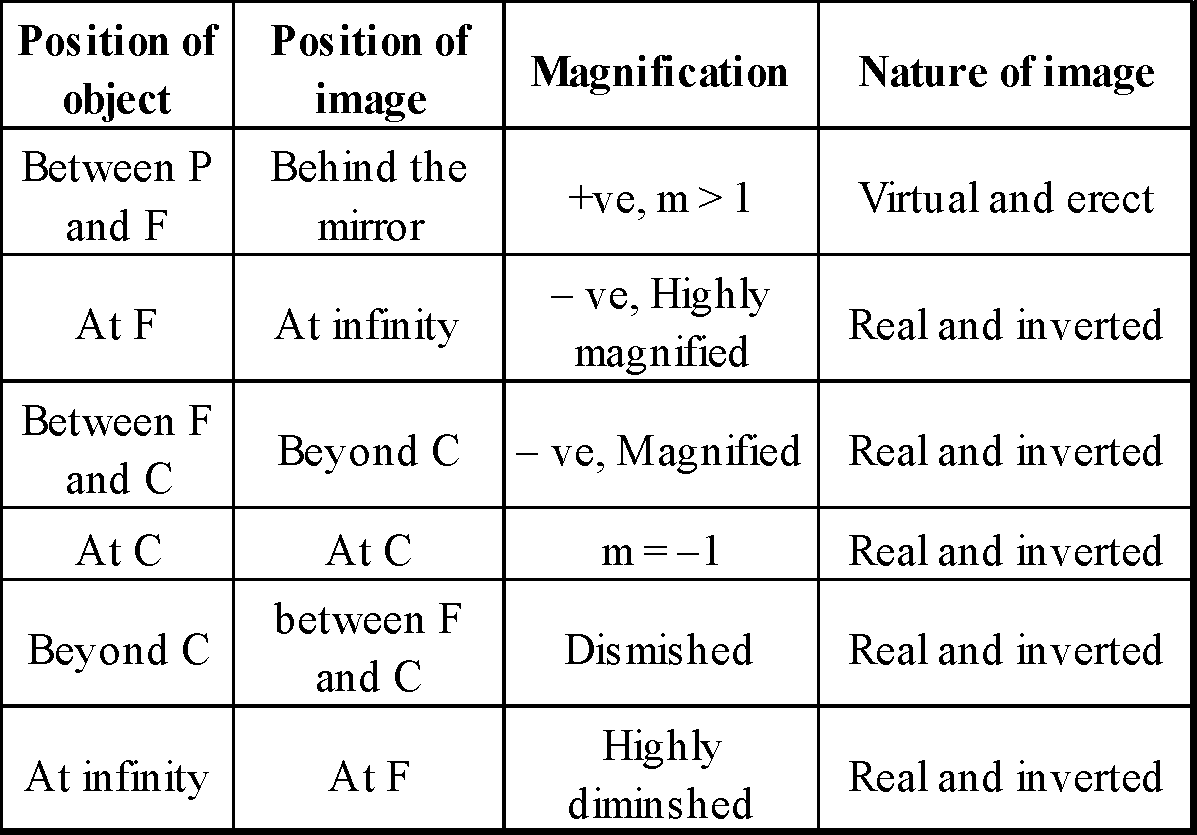 Whenever a wave is bounced back into same medium at an interface reflection is said to have occurred. Transmission of a wave into the second medium at an interface is called refraction. When a ray of light is passing from denser to rarer medium, it bends away from the normal and when passing from rarer to denser medium, it bends towards the normal.

REFRACTIVE INDEX OF THE MEDIUM

Refractive index is the relative property of two media. If the first medium carrying the incident ray is a vacuum, then the ratio

n1 sin i = n2 sin r
According to cauchy’s formula 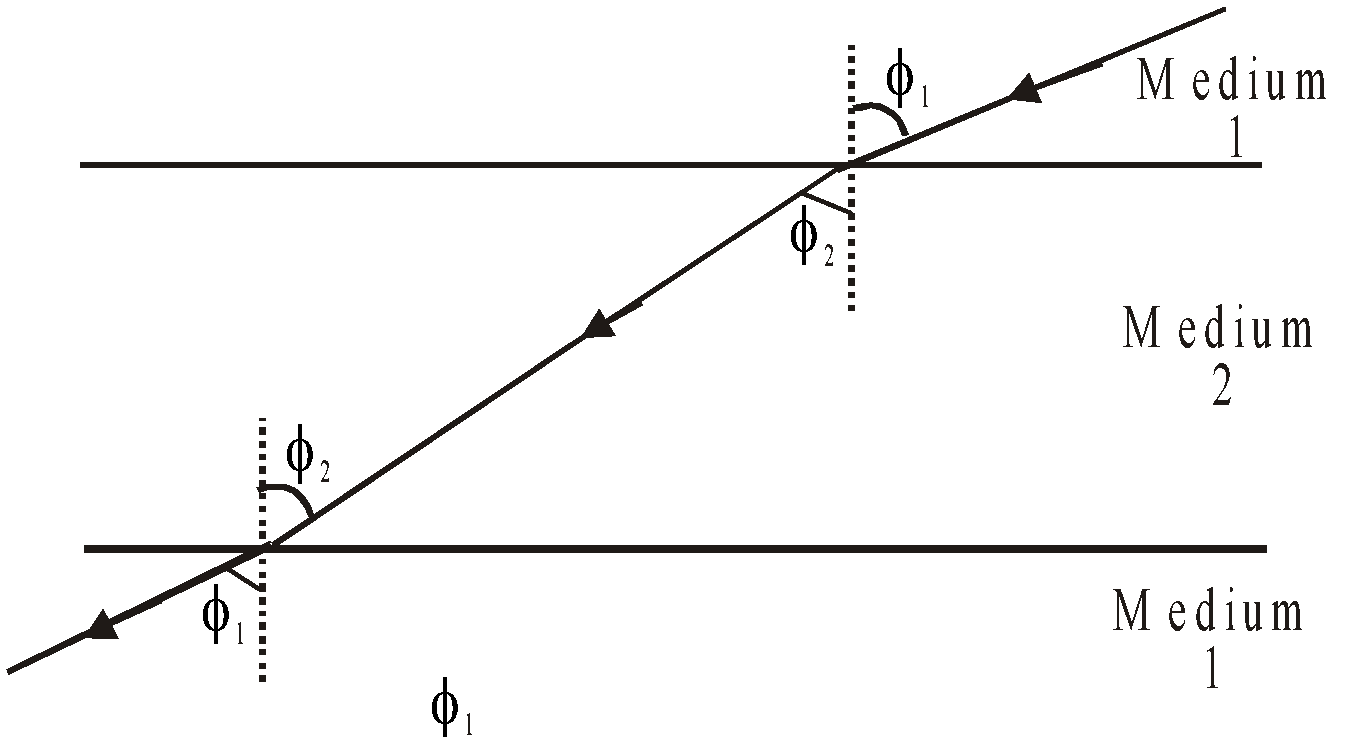 ⇒ k1 < k2 and λ1 > λ2.
It means that if ray goes from rarer medium to denser medium (i.e. from first medium to second medium), then wavenumber increases & wavelength decreases.

⇒ k1 > k2 and λ1 < λ2.
It means that when ray goes from denser to rarer medium, then wave number decreases & wavelength increases.
IMAGE DUE TO REFRACTION AT A PLANE SURFACE, APPARENT SHIFT 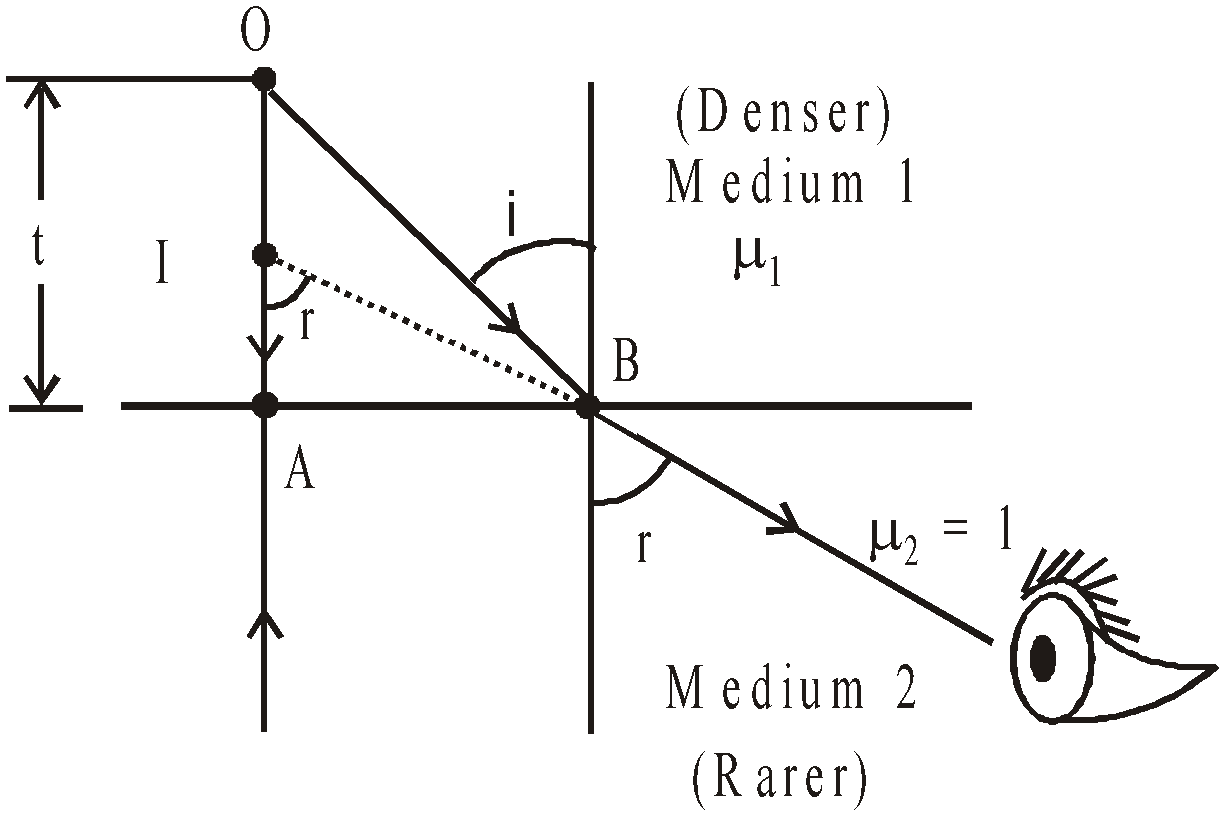 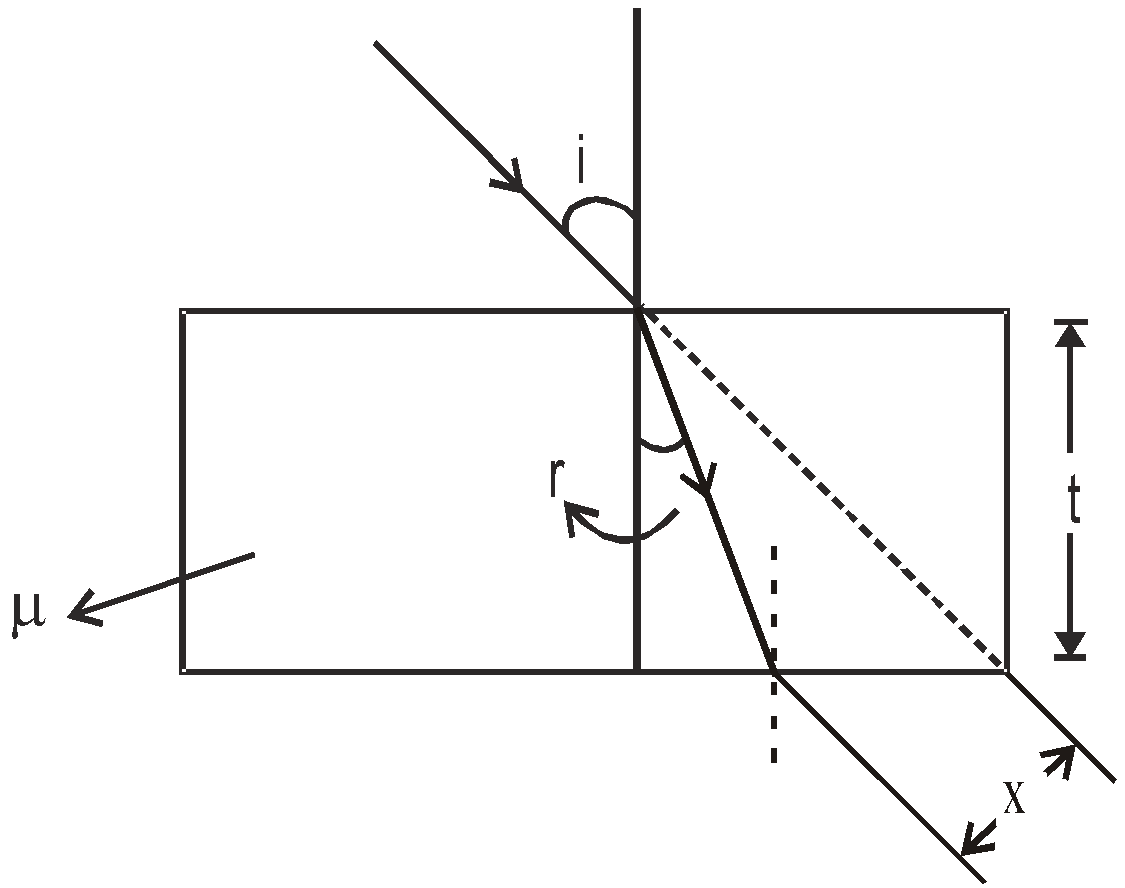 When the object is placed in an optically denser medium and if the incident angle is greater than the critical angle then the ray of light gets reflected back to the originating medium. This phenomenon is called total internal reflection.
Critical angle (ic) : When a ray passes from an optically denser medium to an optically rarer medium, the angle of refraction r is greater than the corresponding angle of incidence i. From Snell’s law

; ic is called the critical angle
This phenomenon takes place in shining of air bubble, sparkling of diamond, mirage and looming, in optical communication using optical fibre.
KEEP IN MEMORY 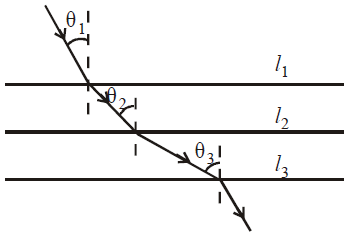 It is important to note that the above relationship is valid only when boundaries undeviated.

COMMON DEFAULT
🗶 Incorrect : If a mirror or a lens is painted black on one half, then  half of image will be formed.
✔ Correct : If half of the mirror or lens is blackened, we get full image but with half the intensity.

REFRACTION AT A SPHERICAL SURFACE 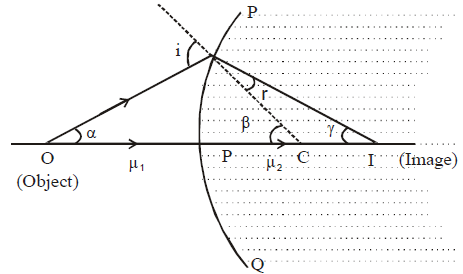 REFRACTION BY A LENS

The focus point of a lens is the point where image of an object placed at infinity is formed. And its distance from optical centre of the lens is called focal length.
Focal length of convex lens is +ve, and of concave lens is –ve.
LENS FORMULA OR THIN LENS FORMULA 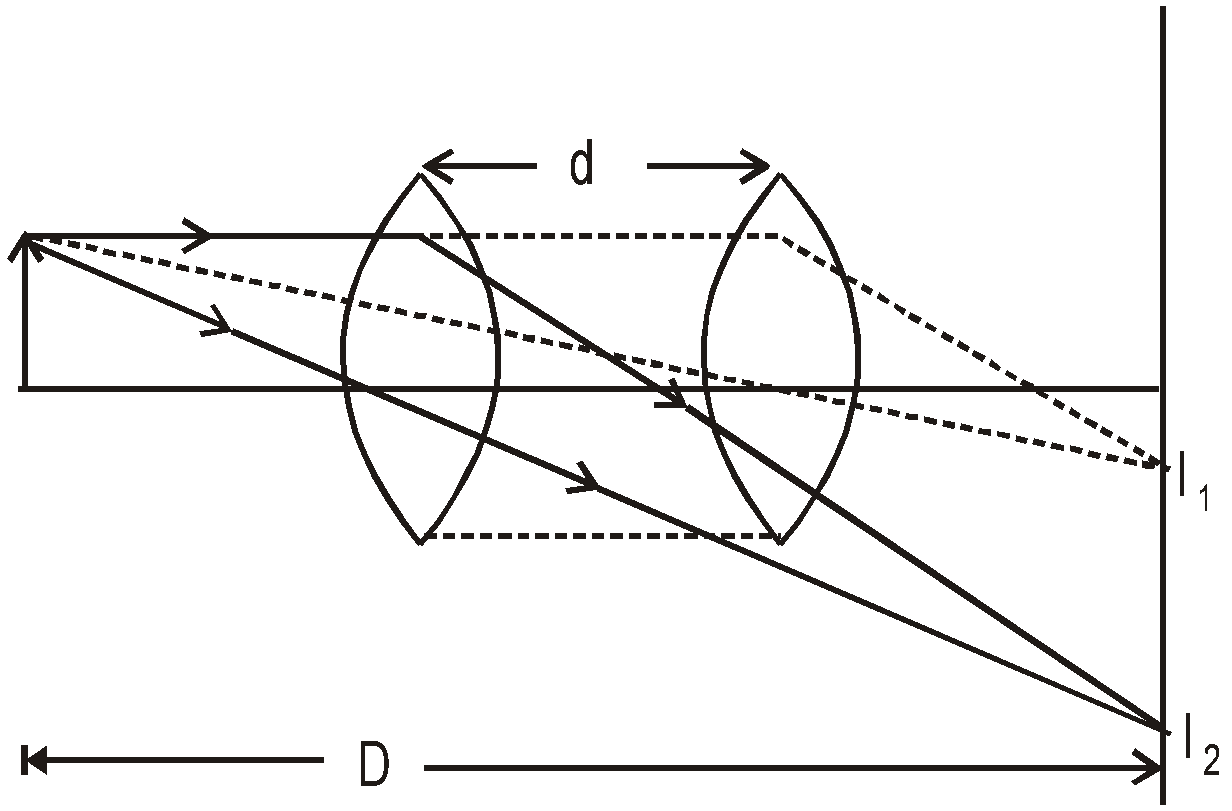 Aperture of a lens : With  reference to a lens, aperture means the effective diameter of its light transmitting area. So the brightness i.e. intensity of image formed by a lens which depends on the light passing through the lens will depend on the square of aperture i.e. I ∝ (aperture)2

i.e., each part will have focal length 2f.

REFRACTION THROUGH A PRISM 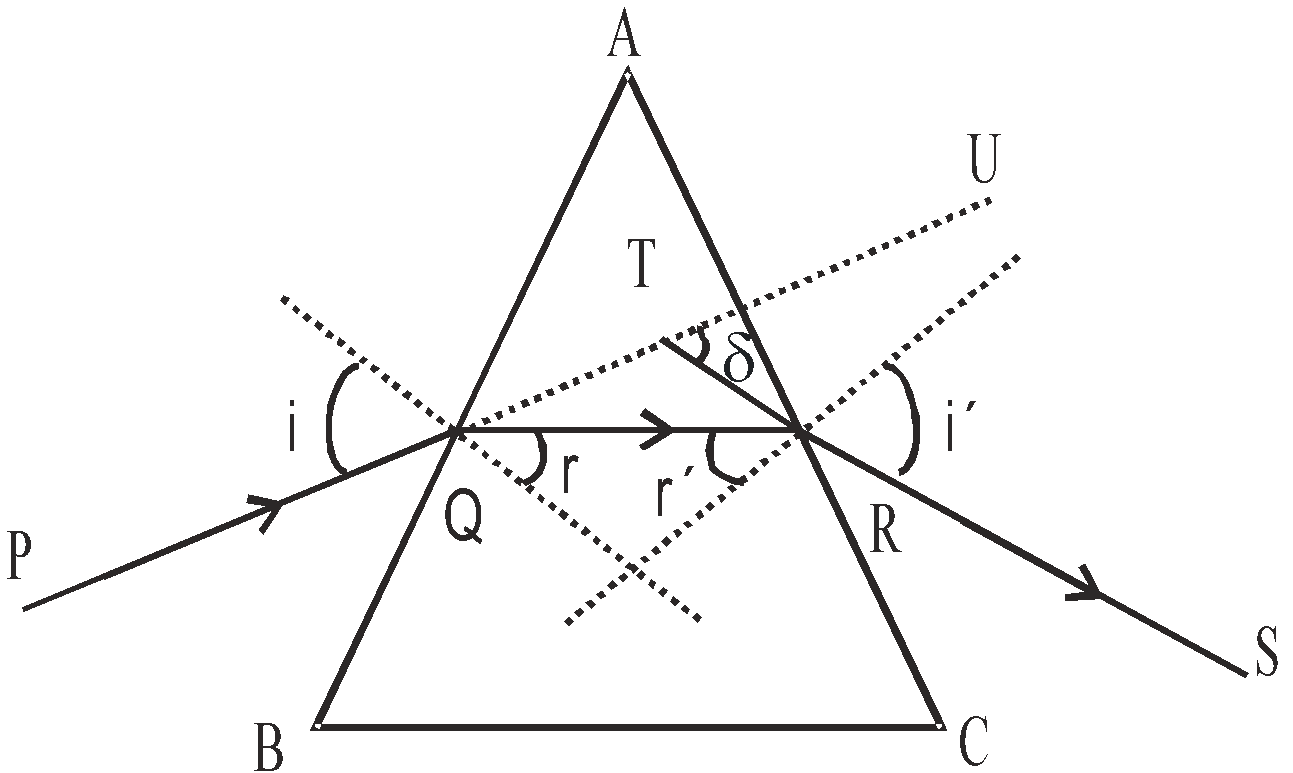 where δm = minimum angle of deviation
If angle of prism A is small, than δm is also small.

Plot of angle of deviation (δ) versus angle of incidence (i) for a triangular prism. 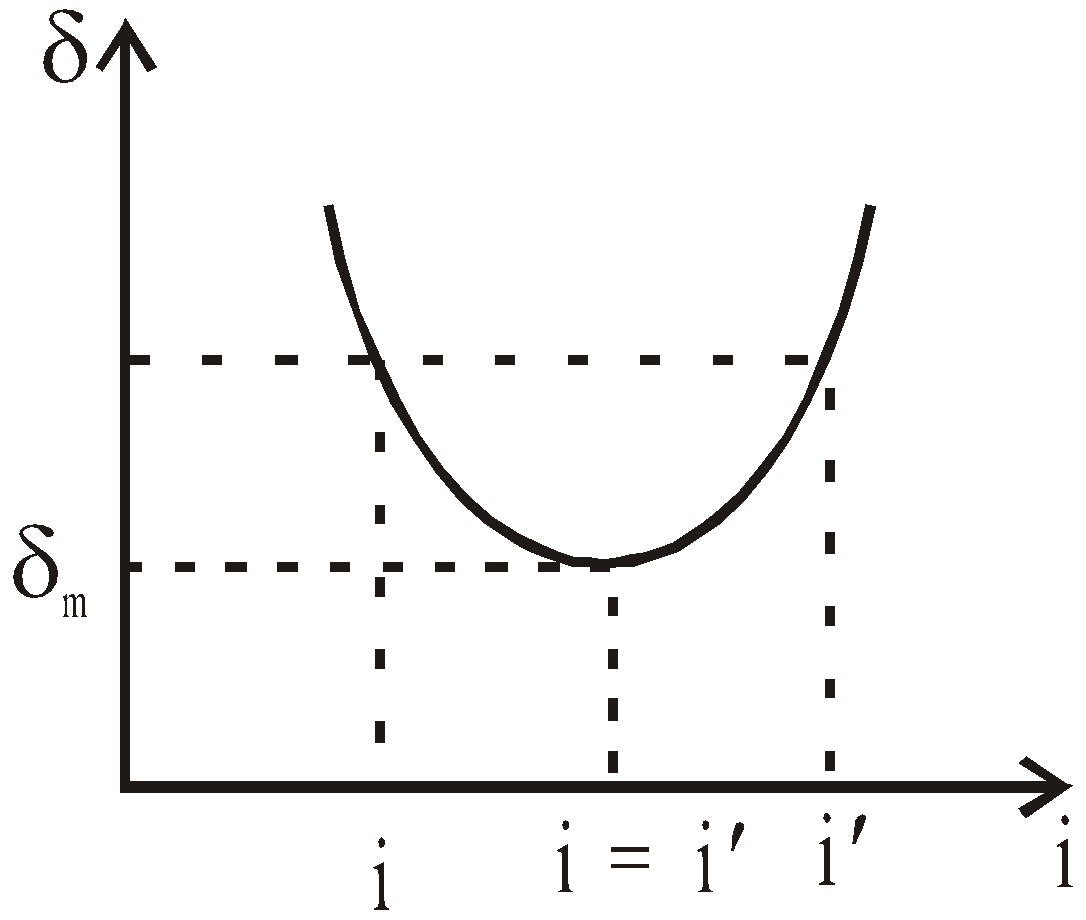 It is the breaking up of white ray of light into its constituents colours VIBGYOR. The band of seven constituent colours is called spectrum.
Angular dispersion : It is defined as the difference of deviations suffered by the extreme colours.
i.e.,

[For thin prism]
Dispersive power : It is defined as the ratio of angular dispersion to the mean deviation produced by the prism.
i.e.,

[For thin prism]
KEEP IN MEMORY
For this prism

This shows that for a small angled prism, deviation is independent of angle of incidence.

For this to happen the conditions is

For this to happen

Equation (1) is said to be the condition of achromatism for combination of two prisms.
Cauchy’s equation :

, where a, b and c are constants.
It is a consequence of dispersion of sunlight by water droplets due to a combinations of refraction and total internal reflection. If the rainbow is formed after one internal reflection in the droplets, it is called a primary rainbow. In this the violet ray emerges at an angle of 40.8º and red rays at an angle of 42.8º. If the rainbow is formed after two internal reflections, it is called a secondary rainbow. In this the violet rays emerge at 54º and red at 51º, i.e. the order of colours is reversed. The primary rainbow is brighter than the secondary.

COMMON DEFAULT
🗶 Incorrect : Using thin lens formula while the lens given in the numerical problem is thick.
✔ Correct : The lens formula

are valid only for thin lenses.

It is known as simple magnifier & consist of a convergent lens with object between its focus & optical centre & eye close to it. 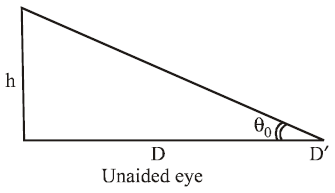 The magnifying power of a simple microscope (M.P.) is

In this case M.P. is minimum if eye is least strained.
and from lens formula

In this case M.P. is maximum and as final image is close to eye, eye is under maximum strain. 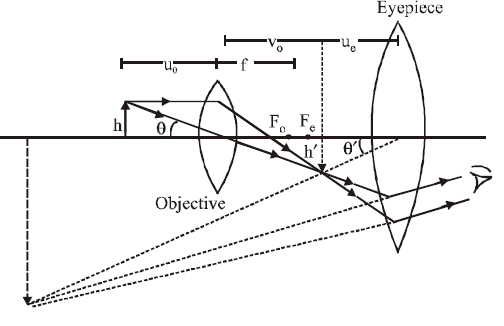 M.P. of compound microscope is defined as

Length of tube is

Length of tube is

;
Length of tube L =  fo + fe+ 4f, where f is the focal length of erecting lens, which is used in this telescope.

RESOLVING POWER OF MICROSCOPE AND TELESCOPE 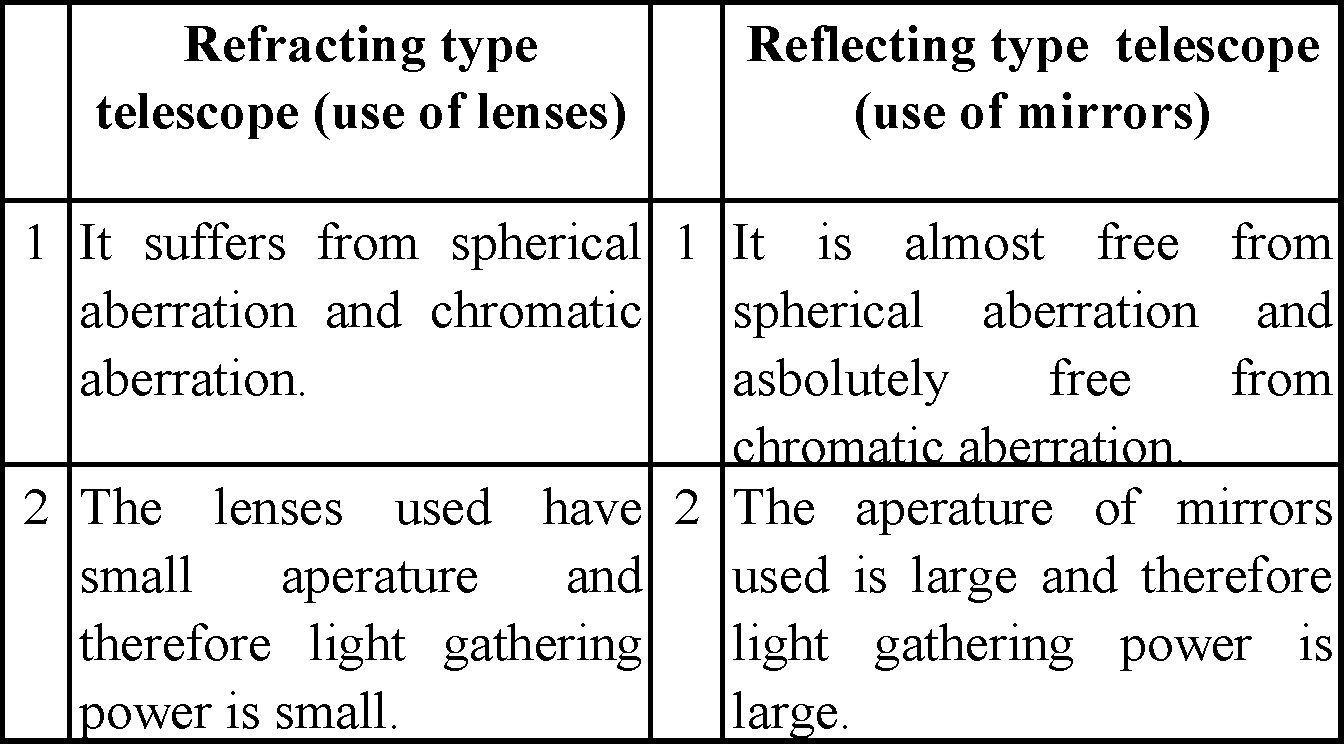 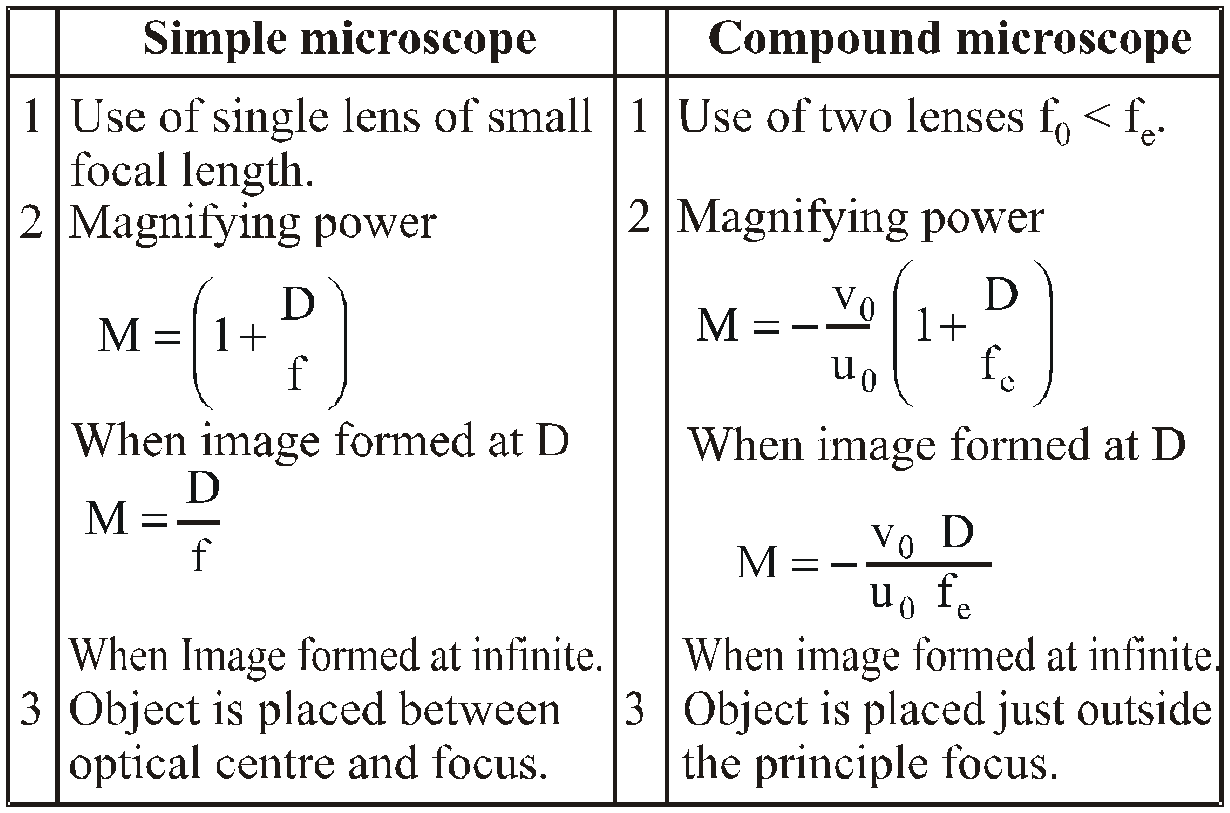 Some common eye defects are myopia, hypermetropia, astigmatism and presbyopia. 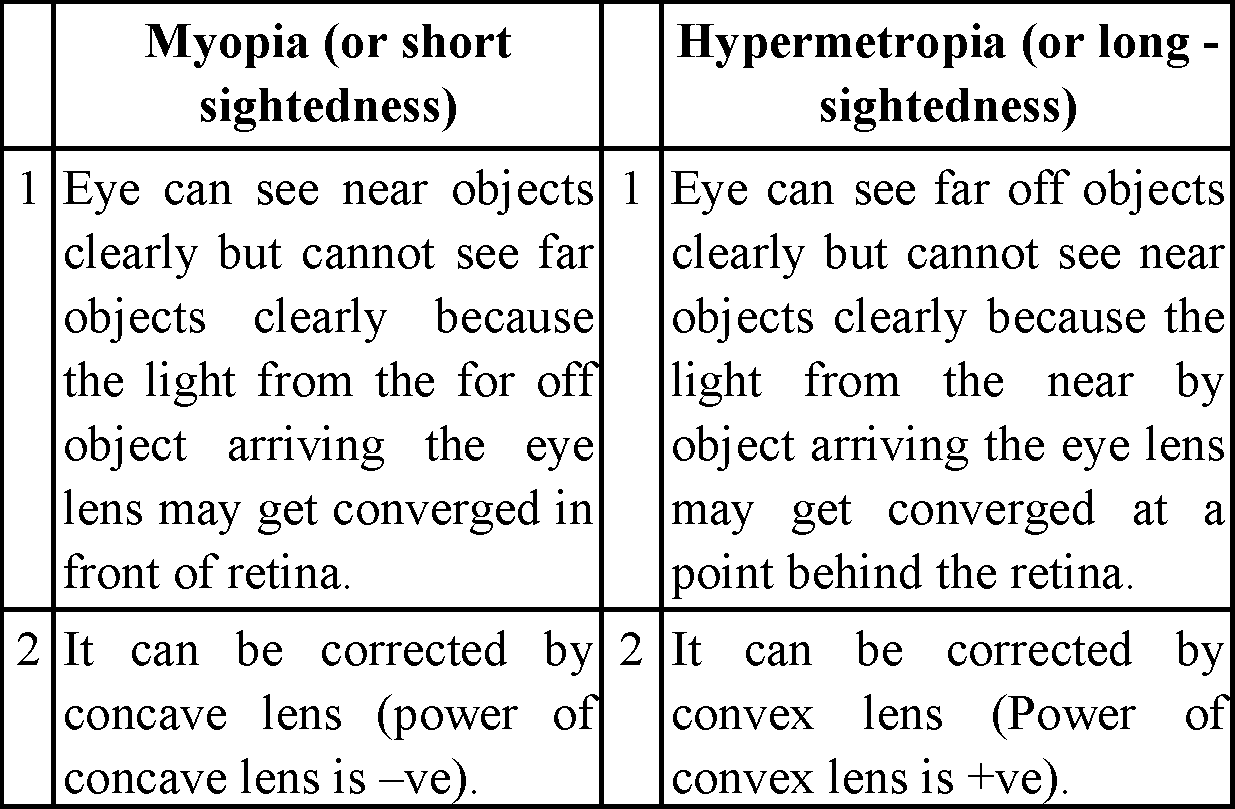 Astigmatism : It is due to different curvature of cornea in horizontal and vertical plane. It is corrected by using cylindrical lens.
Presbyopia : The eye with this defect cannot see near objects as well as far off objects clearly.

or   φ = 4π. I
Solid angle
We know that arc of a circle subtends an angle θ on the centre of circle O

..(ii)
The unit of solid angle is steradian. If in eq (ii)
ΔA = r2 , then ω = 1 steradian
If ΔA = 4πr2 (total surface area of sphere) then ω = 4π steradian.
Illuminance (E) of a surface is the luminous flux incident normally on unit area of the surface. Its unit is lux.

For point source, the total normal area will be 4πr2,
so

Luminance or brightness of a surface is the luminous flux reflected into our eyes from unit area of the surface. The unit of Brightness is lambert.

Let S is a unidirectional point source, whose luminous intensity is I. It has some surface ΔA at distance r from source S.

Let central ray of source s falls perpendicularly on surface ΔA, then luminous flux Δφ is given by
Δφ = I×Δω …(i)
where

…(iii)
where E is called illuminance or intensity of illumination.
If in eq. (iii) I is constant for a given source then

So intensity of illumination of any source is inversely proportional to square of the distance between light source & surface. This is called inverse square law.

Let S is unidirectional point source & its luminous intensity is I. There is a surface of area ΔA at distance r from S, which is kept in such a way that light from S falls obliquely on it and central ray makes an angle θ with normal to ΔA.
Then by fig.  ΔA′ = ΔA cos θ

According to definition of  luminous intensity :
Δφ = I × Δω
where

For any given source (I constant) & at a fixed distance (r constant) E ∝ cos θ
i.e., the, intensity of illumination of a surface is proportional to the cosine of angle of the inclination of the surface. This is called Lambert’s cosine law. As θ increases, cos θ decreases & consequently E decreases.
θ is the angle between normal to the area and direction of light propagation.
Prev Online Test Series 3: Daily Practice Papers – Electromagnetic Waves
Next Online Test Series 1 -NEET & AIIMS Past Years based -Ray Optics and Optical Instruments