The force between atoms of an element is called interatomic force. The force between molecules of a compound (or element) is called intermolecular force. These forces are electrical in nature. Depending on the distance between the atoms, this force may be attractive or repulsive in nature. These forces are responsible for the definite size or shape of a solid.
Detailed calculations as well as deductions from experiment show that the interaction between any isolated pairs of atoms or molecules may be represented by a curve that shows how the potential energy varies with separation between them as shown in the figure. 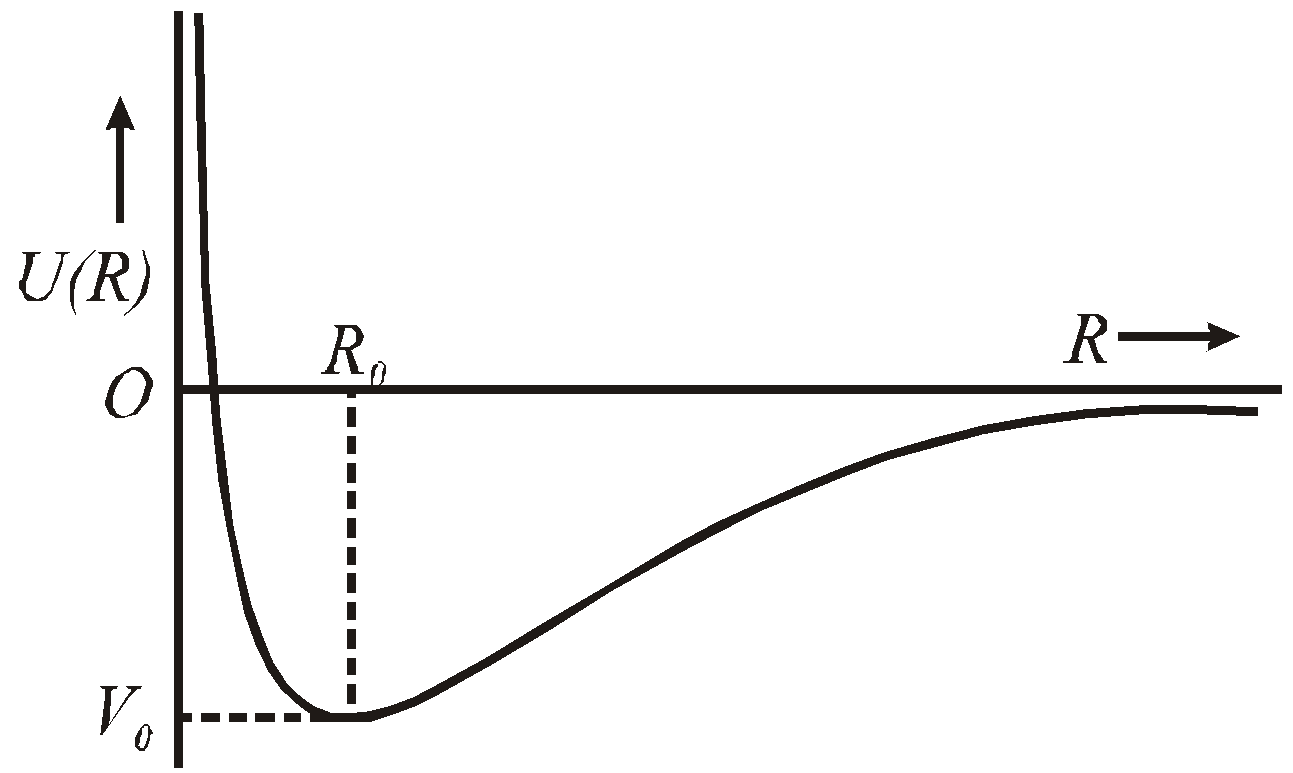 This curve describes the interatomic potential. The force between the atoms can be found from the potential energy by using the relation

The resulting interatomic force curve is shown in figure.
Force is along the line joining the atoms or molecules, and is shown negative for attraction and positive for repulsion. 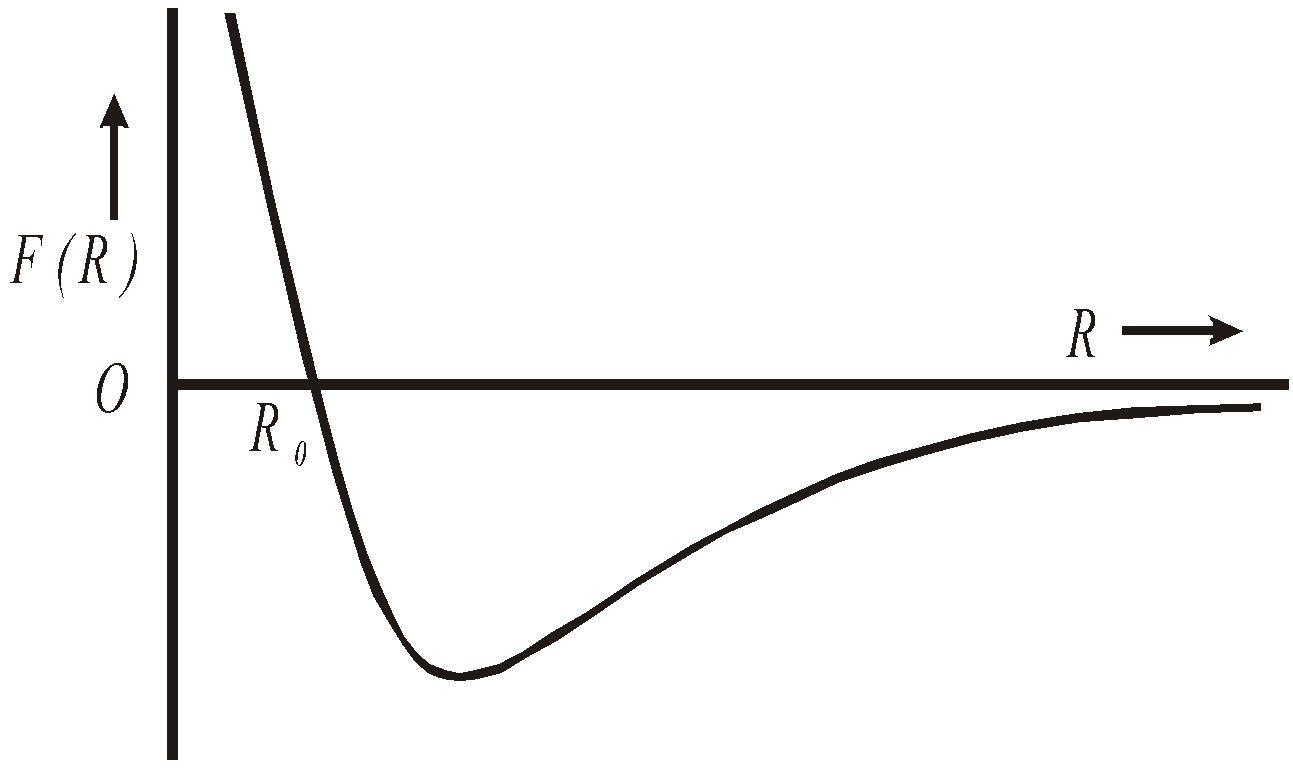 We see that as the distance decreases, the attractive force first increases and then decreases to zero at a separation where the potential energy is minimum.
For smaller distance force is repulsive, because at these distance the negative charge distribution associated with one atom begins to overlap with that associated with the neighbouring atom.
The force of attraction between molecules may be written as

,
where b is a constant like a. The force of repulsion varies very rapidly. Fr is inversely proportional to the ninth power of distance between the molecules.
The resultant force acting on the molecules is

The distance between the molecules decides the sign of the resultant force.

The property of the body by virtue of which it tends to retain its deformed state after removing the deforming force is called plasticity. If the body does not have any tendency to recover its original shape and size, it is called perfectly plastic.

Its S.I. Unit is Nm-2
Stress is a tensor as its value changes when direction changes.
TYPES OF STRESS

Strain has no units or dimensions.
TYPES OF STRAIN
Longitudinal strain =

It is the fundamental law of elasticity  given by Robert Hooke in 1679. It states that “the stress is directly proportional to strain provided the strain is small “.
i.e.  Stress ∝ strain

Let us consider a long  bar (shown in fig.) of cross-sectional area A and length lo, which is clamped at one end. When we apply external force Fl longitudinally along the bar, internal forces in bar resist distortion, but bar attains equilibrium in which its length is greater and in which external force is exactly balanced by internal forces. The bar is said to be stressed in this condition.

Now if the solid bar obey the Hooke’ law, the Young’s modulus, Y is defined as

Where Δl is change in the length of bar, when we apply Fl.

The Bulk modulus B is defined as

Negative sign comes to make B positive, because with the increase of pressure, the volume of body decreases or vice versa.
The reciprocal of the Bulk modulus is called compressibility of material
i.e., Compressibility = 1/B

This is the phenomenon of a delay in recovering the original configuration by a body, if it had been subjected to stress for a longer time the body loses the property of elasticity temporarily.

It is the time delay in regaining the original shape after removal of deforming forces. Elastic relaxation time for gold, silver and phosphor bronze is negligible.

When the stress applied on a body, is decreased to zero, the strain will not be reduced to zero immediately. For some substances (e.g.-vulcanized rubber), the strain lags behind the stress. This lagging of strain behind stress is called elastic hysteresis. 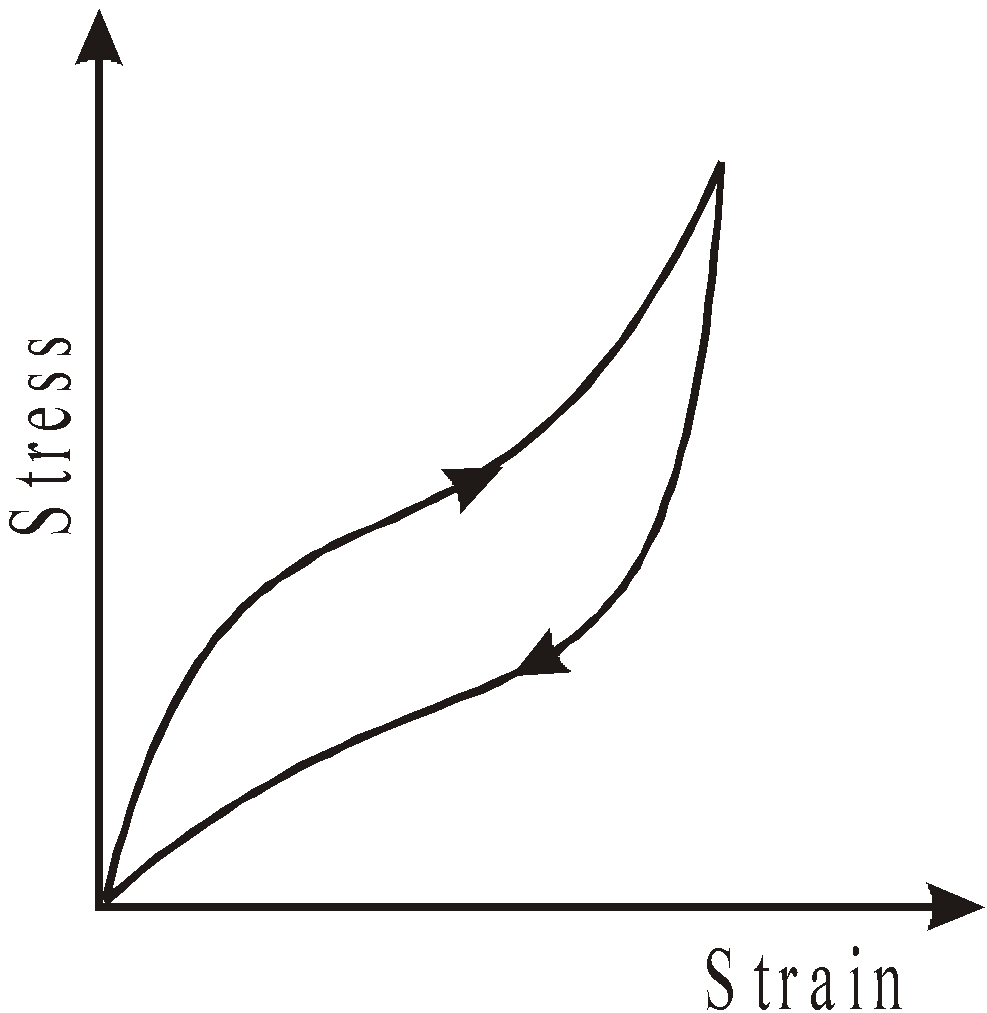 The stress-strain graph for increasing and decreasing load encloses a loop, as shown in figure. The area of the loop gives the energy dissipated during its deformation.
KEEP IN MEMORY
For a spring,  F =

(stress)2 /modulus of elasticity.
Work done in stretching a wire or work done per unit volume
=

Torsional rigidity of a cylinder

A beam fixed at one end and loaded at the other end is called a cantilever.

where mg = load applied, l = length of cantilever, I = geometrical moment of inertia of its cross section.
KEEP IN MEMORY
(ii) Breaking stress does not depend on the length of wire
(iii) Breaking stress depends on the material of wire.
Prev Online Test Series 3: Daily Practice Papers – Gravitation
Next Online Test Series 1 -NEET & AIIMS Past Years based -Mechanical Properties of Solids