Fluid is something that can flow. All liquids and gases are fluids. The force exerted normally at a unit area of the surface of a fluid is called fluid pressure.
i.e.,  P =

PASCAL’S LAW AND ITS APPLICATIONS

PASCAL’S LAWPressure in a fluid in equilibrium is the same everywhere, if the effect of gravity is neglected.
ANOTHER FORM OF PASCAL’S LAW
The excess pressure, applied anywhere in a mass of confined incompressible fluid is transmitted by the fluid in all directions without being diminished in magnitude.
APPLICATIONS OF PASCAL’S LAW
Hydraulic lift : Its working is based on Pascal’s law. A piston of small cross-sectional area (a) exerts a force (f) on the liquid.

The pressure is transmitted undiminished to the larger cylinder of cross-sectional area A.

If a body is partially or wholly immersed in a fluid, it experiences an upward force due to the fluid surrounding it.  The phenomenon of force exerted by fluid on the body called buoyancy and the force is called buoyant force or upthrust.
A body experiences buoyant force whether it floats or sinks, under its own weight or due to other forces applied on it.

When any body is immersed (totally or partially) in a liquid it appears to lose part of its weight and the apparent loss of weight is equal to the weight of liquid displaced.
Let a body of weight W is immersed in a fluid and W’ is upthrust on it then
Let V be the volume of a body of density d and V’ be the volume of liquid of density ρ displaced. If the body floats then Vd = V′ρ
∴

gives the fraction of the volume inside the liquid in which the body floats.
Also, body immersed in a fluid experiences an upward buoyant force equivalent to the weight of the fluid displaced by it.
The proof of this principle is very simple. Imagine a body of arbitrary shape completely immersed in a liquid of density ρ as shown in the figure (a). A body is being acted upon by the forces from all directions. Let us consider a vertical element of height h and cross-sectional area dA (as shown in the figure (b)).

Hence, for the entire body, the buoyant force is the weight of the volume of the fluid displaced.
The buoyant force acts through the centre of gravity of the displaced fluid.
KEEP IN MEMORY
(ii) If two bodies have equal upthrust when just immersed in a liquid, both will have the same volume.
(iii) If a person floats on his back on the surface of water, the apparent weight of person is zero.

Liquids may be treated as incompressible. Hence their density may be assumed to be constant throughout.
Relative density =

change in pressure and B = bulk modulus of liquid.

And if m1 = m2 but different densities are mixed together, then the density of the mixture is harmonic mean of the densities.
i.e.,

It is defined as the force per unit length acting at right angles on either side of an imaginary line drawn on the free surface of the liquid.
i.e.,

The surface tension is also defined as the work required to increase unit area of that liquid film.
Its SI unit is N/m or J/m2 and dimensions are [ML0T–2].
KEEP IN MEMORY 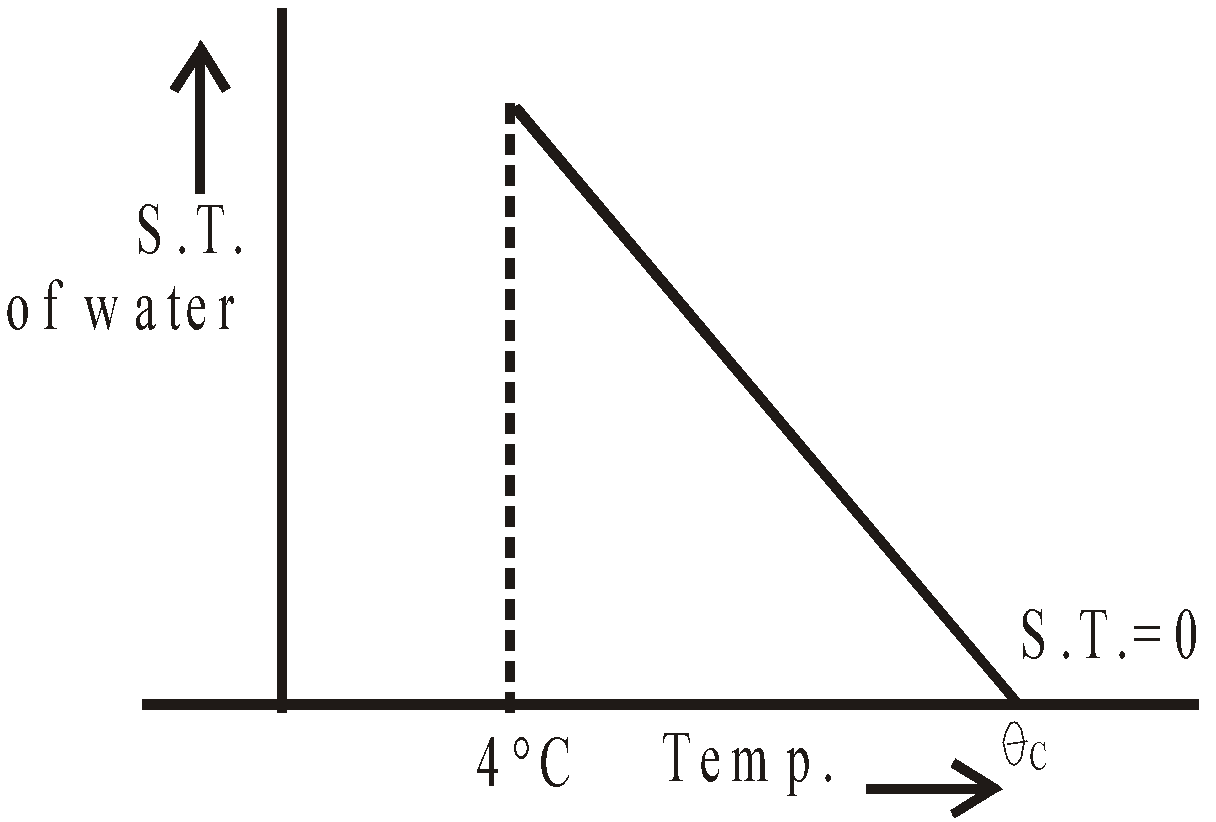 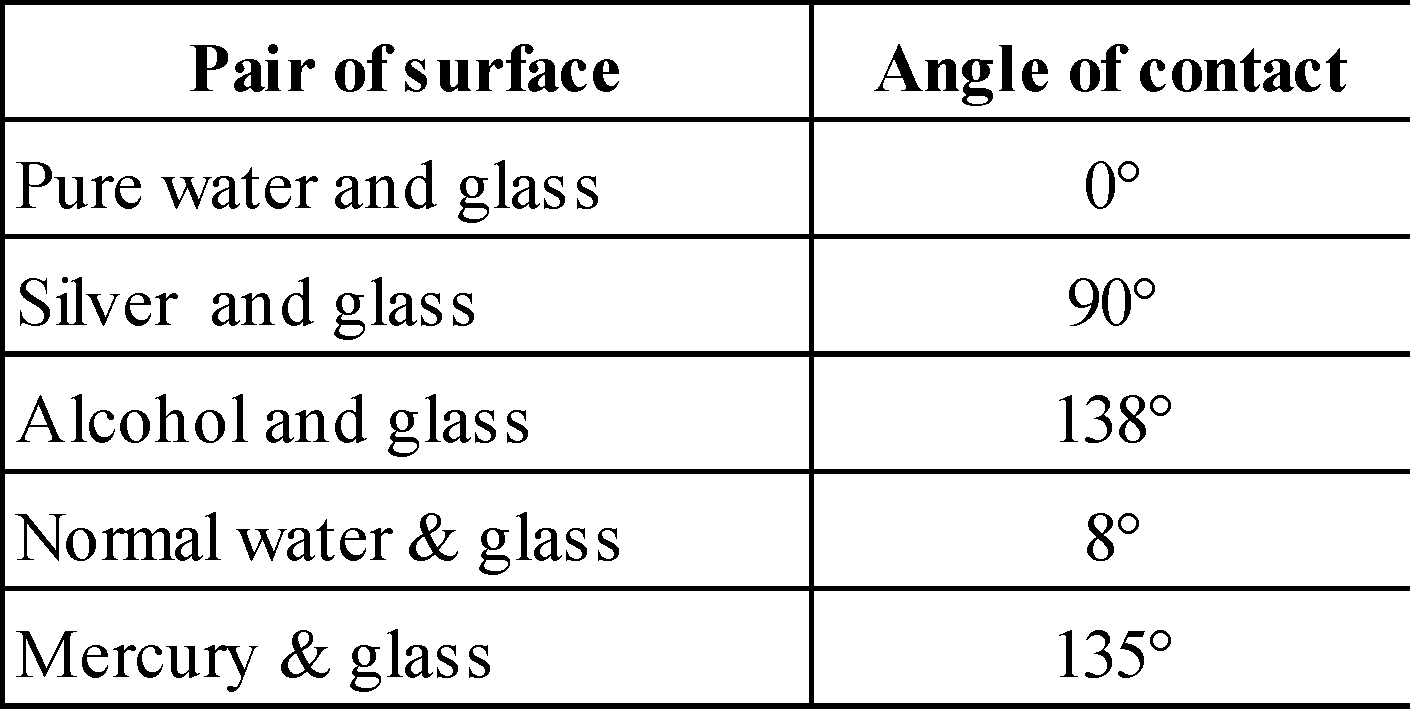 The phenomenon of rise or fall of liquids in capillary tube is known as capillarity.

where r is the radius of the capillary tube.
KEEP IN MEMORY 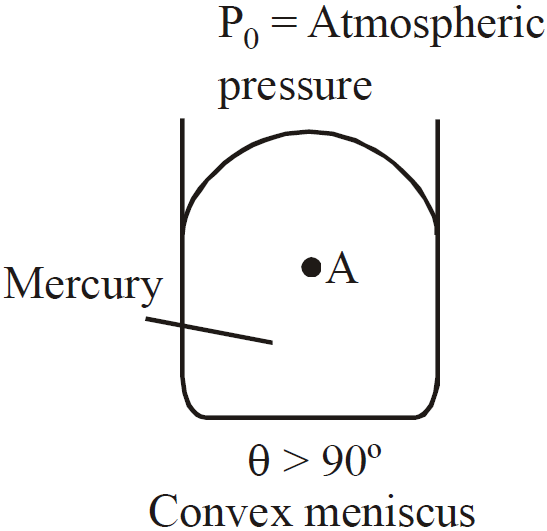 The motion of fluids are of following four types :

When fluid in motion, if fluid particles preceding or succeeding a fluid particle follow the same path, then the path is called streamline and the motion of the fluid is called streamline motion. This type of motion takes place in non-viscous fluids having very small speed.
Principle of continuity : When incompressible, non-viscous liquid flows in non-uniform tube then in streamline flow product of area and velocity at any section remains same.
The mass of liquid flowing in equals the mass flowing out.
i.e., m1 = m2
or,  v1A1ρ1 Δt = v2 A2ρ2Δt ….. (1) 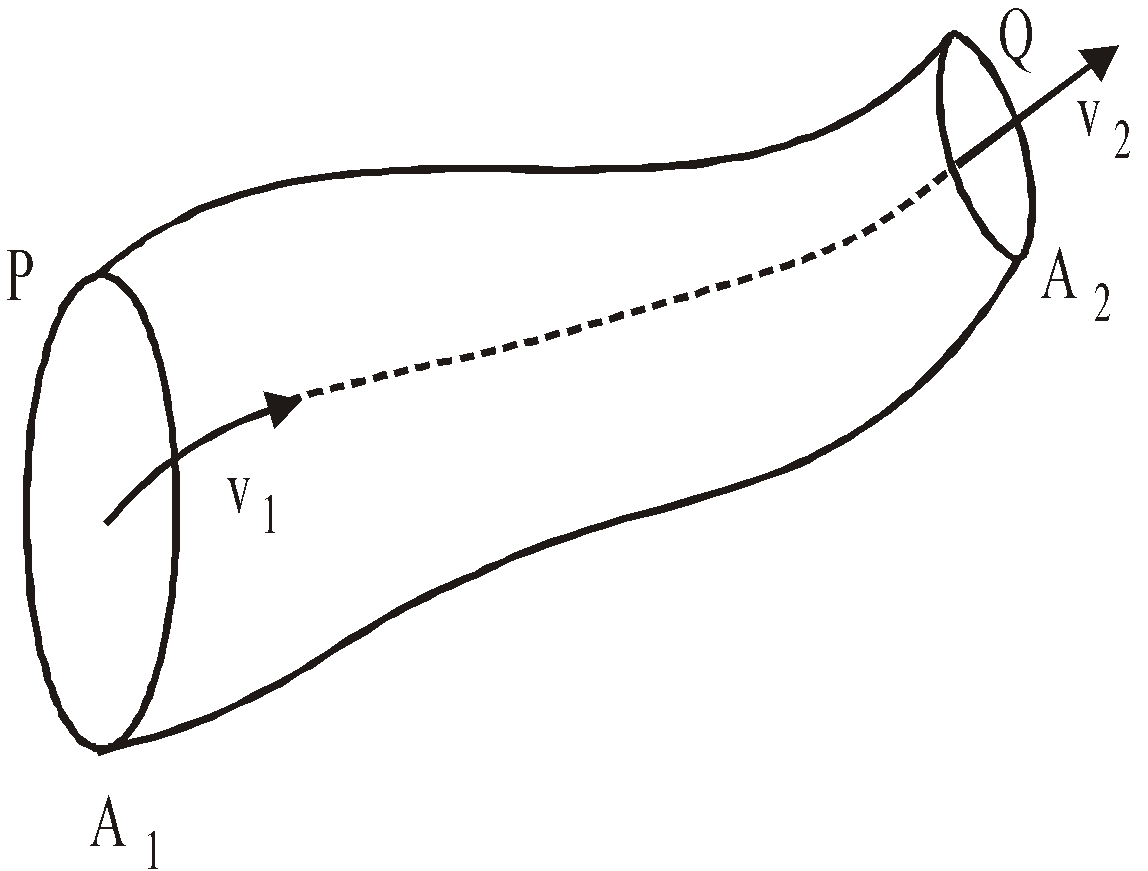 In a liquid in motion, when liquid particles, crossing a point, cross it with same velocity, then the motion of the liquid is called steady state motion. This type of motion takes place in non-viscous liquids having very small speed.

Viscous liquids flow in bounded region or in a pipe, in layers and when viscous liquid is in motion, different layers have different velocities. The layers in contact with the fixed surface has least velocity and the velocity of other parallel layers increases uniformly and continuously with the distance from the fixed surface to the free surface of the liquid. This is called laminar motion of the liquid.

When the velocity of a liquid is irregular, haphazard and large, i.e. Beyond a limiting value called critical velocity the flow of liquid loses steadiness then  the motion of the liquid is called turbulent motion.
Critical velocity Vc

The internal friction of the fluid, which tends to oppose relative motion between different layers of the fluid is called viscosity.
The viscous force between two layers of a fluid of area A having a velocity gradient

is called the coefficient of viscosity.
Its S.I. unit is poiseuille or decapoise.
The C.G.S. unit is called poise.
1 decapoise = 10 poise.

for same liquid, which is flowing in two tubes of radii r1 and r2 respectively.

It is pure number which determines the nature of flow of liquid through a pipe.

N is a dimensionless quantity and carries no unit.

Bernoulli’s theorem is strictly applicable for an ideal fluid. An ideal fluid is one which is (a) incompressible (b) streamline (c) irrotational and (d) non-viscous.

This difference in the velocities of air results in the pressure difference between the lower and upper faces and their is a net upward force on the ball. This dynamic lift due to spinning is called Magnus effect.
Some other applications of Bernoulli’s principle :

When a solid moves through a viscous medium, its motion is opposed by a viscous force depending on the velocity and shape and size of the body. The energy of the body continuously decreases in overcoming the viscous resistance of the medium. This is why cars, aeroplanes etc. are shaped streamline to minimize the viscous resistance on them.
The viscous drag on a spherical body of radius r, moving with velocity v, in a viscous medium of viscosity η is given by

This relation is called Stokes’ law.   .
Importance of Stoke’s law

When a spherical body is allowed to fall through viscous medium, its velocity increases till the viscous drag plus upthrust is equal to the weight of the body. After that body moves with constant velocity, called terminal velocity.
The terminal velocity is given by

where d = density of body,

,  i.e. greater the viscosity, smaller is the terminal speed.

FLOW OF LIQUID THROUGH TUBE/PIPE

, where p is the pressure difference between the two ends of the tubes, r is the radius, l is the length of the tube and η is the coefficient of viscosity, Q = rate of flow of liquid.
Equivalent liquid resistance =

VELOCITY  OF EFFLUX AND TORRICELLI’S THEOREM