A natural magnet is an ore of iron (Fe3O4) which
The magnets which are obtained artificially are called artificial magnets, e.g. a bar magnet, a magnetic needle, horse shoe magnet etc.

A bar magnet consists of two equal and opposite magnetic poles separated by a small distance. Poles are not exactly at the ends. The shortest distance between two poles is called effective length (Le) and is less than its geometric length (Lg).
For bar magnet Le = 2l and Le =(5/6) Lg.
For semi-circular magnet Lg = πR and Le = 2R.

According to Gauss’s theorem in magnetism, surface integral of magnetic field intensity over a surface (closed or open) is always zero i.e.

This theorem establishes that the poles always exist in equal and unlike pairs.

The space around a magnet within which its influence can be experienced is called its magnetic field.

ATOM AS A MAGNETIC DIPOLE

Every atom of a magnetic material behaves as a magnetic dipole, because electrons in the atom revolve around the nucleus. The magnetic moment M associated with an atomic dipole as

is called Bohr magneton.
Most of the magnetic moment is produced due to electron spin, the contribution of the orbital revolution is very small.

Magnetic line of force is an imaginary curve the tangent to which at a point gives the direction of magnetic field at that point or the magnetic field line is the imaginary path along which an isolated north pole will tend to move if it is free to do so.

PROPERTIES OF MAGNETIC LINES OF FORCE

Magnetic flux = number of magnetic lines of force  = µ0 × m
Where µ0 is number of lines associated with unit pole.

The magnetic moment of a magnet in magnitude is equal to the product of pole strength with effective length (i.e. magnetic length). Its direction is along the axis of magnet from south pole to north pole.

If the same bar magnet is bent in a semicircle then

Where m is pole strength, 2 is effective length and

is unit vector having a direction from S-pole to N-pole.
The SI unit of

is A m2, which is equivalent to J/T.
CIRCULAR CURRENT LOOP AS A MAGNET
A small plane loop of current behaves as a magnet with a definite dipole moment given by

where A is the area of the loop, I  the current in the loop and is a unit vector perpendicular to the plane of the loop, and its direction is decided by the sense of flow of current I using the Fleming’s right hand rule.
RELATION BETWEEN MAGNETIC MOMENT AND ANGULAR MOMENTUM

Where q is the total charge on a body of mass m rotating about a fixed axis.
MAGNETIC MOMENT, POLE STRENGTH AND EFFECTIVE LENGTH WHEN A MAGNET IS CUT 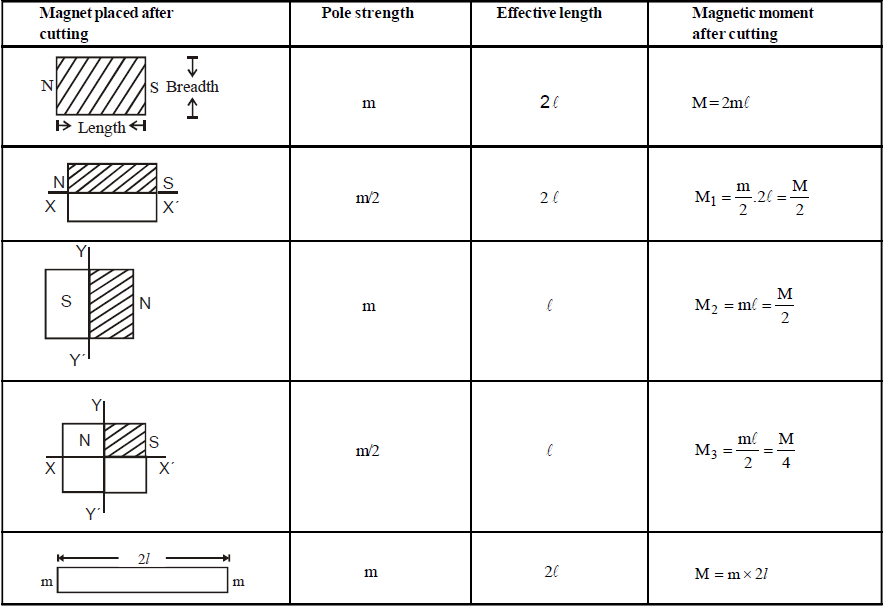 where m1 and m2 are the pole strengths of the two magnetic poles, r is the distance between them and μ0 is the permeability of free space.
Unit magnetic pole : A unit magnetic pole may be defined as the pole which when placed in vacuum at a distance of one metre from an identical pole, repels it with a force of 10–7 newton.

TORQUE ON A MAGNET IN A MAGNETIC FIELD

where θ is the angle between

It is clear from the expression that

).
The net force acting on a bar magnet placed
Let the length of a bar magnet be 2l and pole strength be m, the magnetic field is B, and the angle between B and bar magnet is θ. Force on north pole is mB along the field and that on south pole is mB opposite to the field. 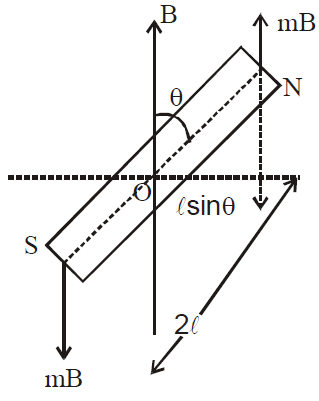 This torque tries to align the magnet with the field.

WORK DONE BY EXTERNAL AGENT IN ROTATING THE MAGNET

If an external agent rotates the magnet slowly, the agent has to exert a torque MBsinθ opposite to that exerted by the field.
Work done by the agent in changing the angle from θ to θ + dθ is dW = (MBsinθ) dθ

Wext is stored as potential energy of the field-magnet system. Thus 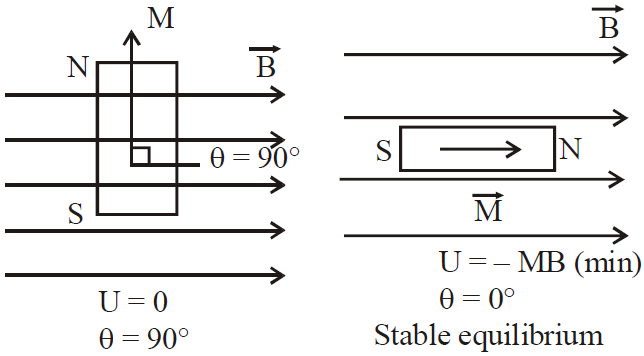 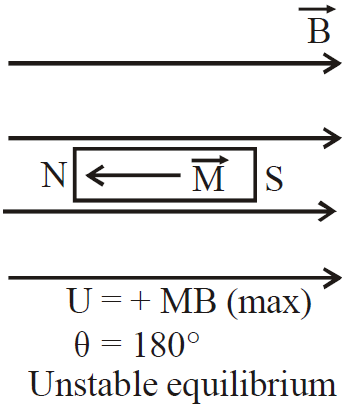 The surface integral of magnetic field

over a closed surface S is always zero.
Mathematically

The magnetic flux through a given area may be defined as the total number of magnetic lines of force passing through this area. It is equal to the product of the normal components of the magnetic field B and the area over which it is uniform. In general,
Magnetic flux,

, where θ is angle between normal to the area dA with magnetic field B.
Magnetic flux linked with a closed surface is zero i.e.,

The S.Ι. Unit of magnetic flux is weber (Wb) : If a magnetic field of 1 tesla passes normally through a surface of area 1 square metre, then the magnetic flux linked with this surface is said to be 1 weber.

OSCILLATIONS OF A BAR MAGNET IN A MAGNETIC FIELD 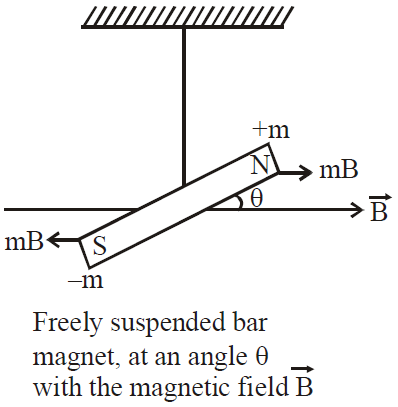 MAGNETIC FIELD DUE TO A BAR MAGNET

where d = distance of the point from the centre of the magnet.
The direction of B1 is along SN.

where, m is pole strength.
BN is magnetic field due to north pole, it is directed away from the magnet.

it is directed towards the magnet.

The direction of B2 is along a line parallel to NS. 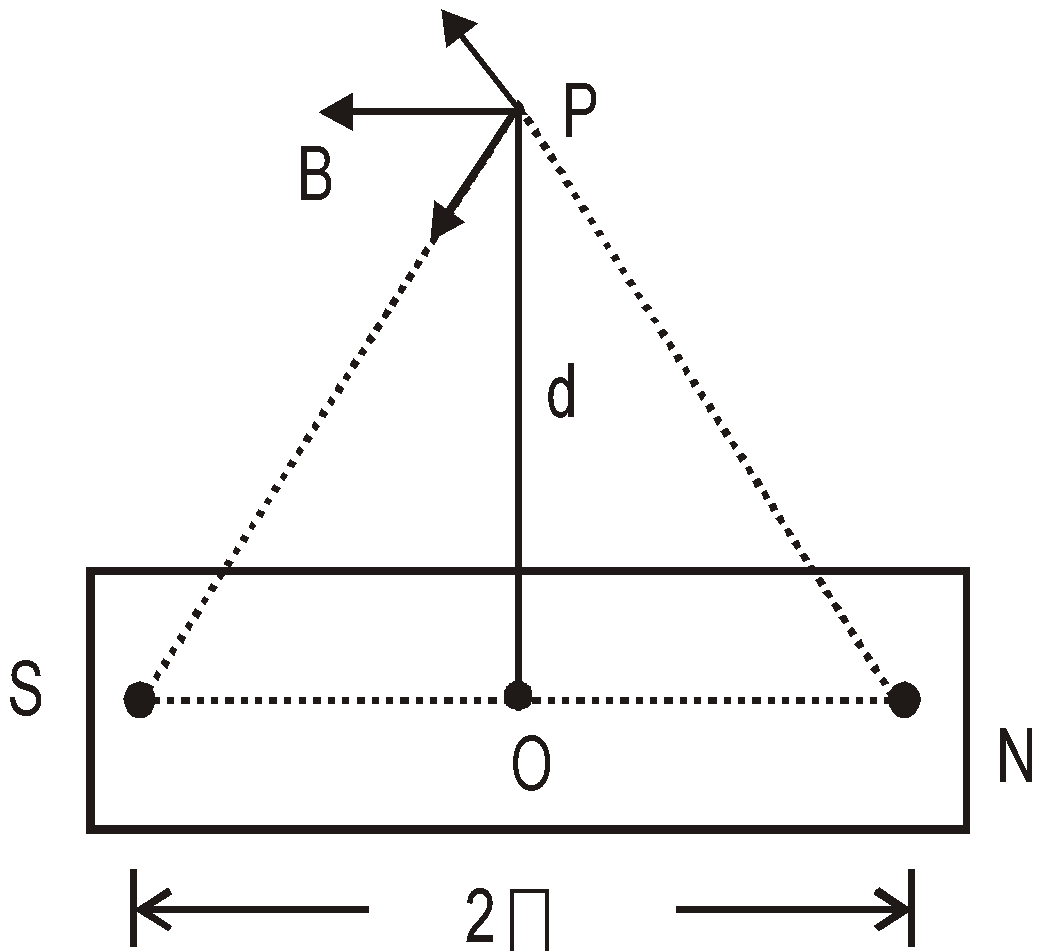 Resultant field at P is,

MAGNETIC FIELD AT ANY POINT HAVING POLAR COORDINATES (R, Θ) RELATIVE TO CENTRE OF MAGNET OR LOOP

and direction is given by

The magnetic potential at a point is defined as the work done in carrying a unit N-pole from infinity to that point against the field. It may also be defined as the quantity whose space rate of variation in any direction gives the intensity of the magnetic field.
i.e.,

MAGNETIC POTENTIAL DUE TO A POINT DIPOLE, AT A DISTANCE R FROM THE POLE OF STRENGTH M IS GIVEN BY

Now V0 at A is the work done is bringing a unit pole from infinity to A.

MAGNETIC POTENTIAL DUE TO A MAGNETIC POLE AT A POINT IN THE BROAD SIDE-ON POSITION.
Net potential at P = 0. The potential at any point lying on the magnetic equator of a magnet is zero in CGS and MKS system. 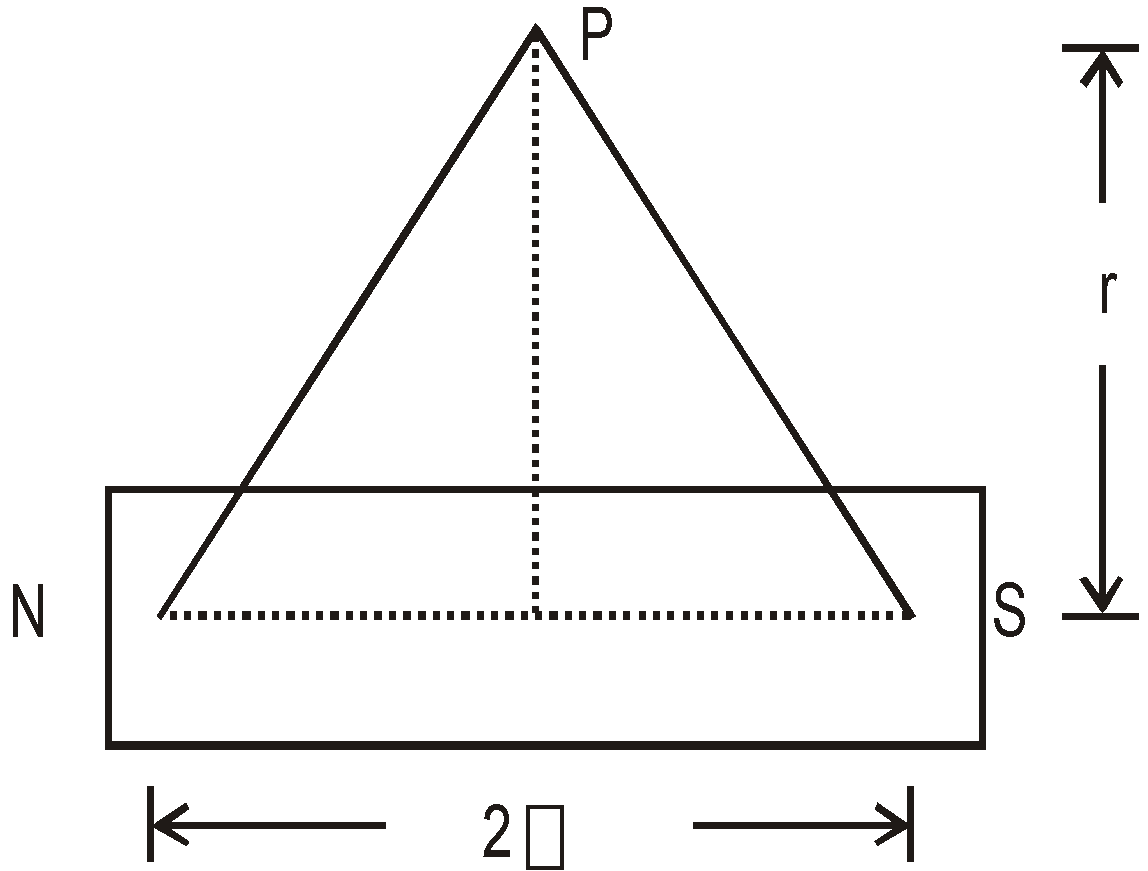 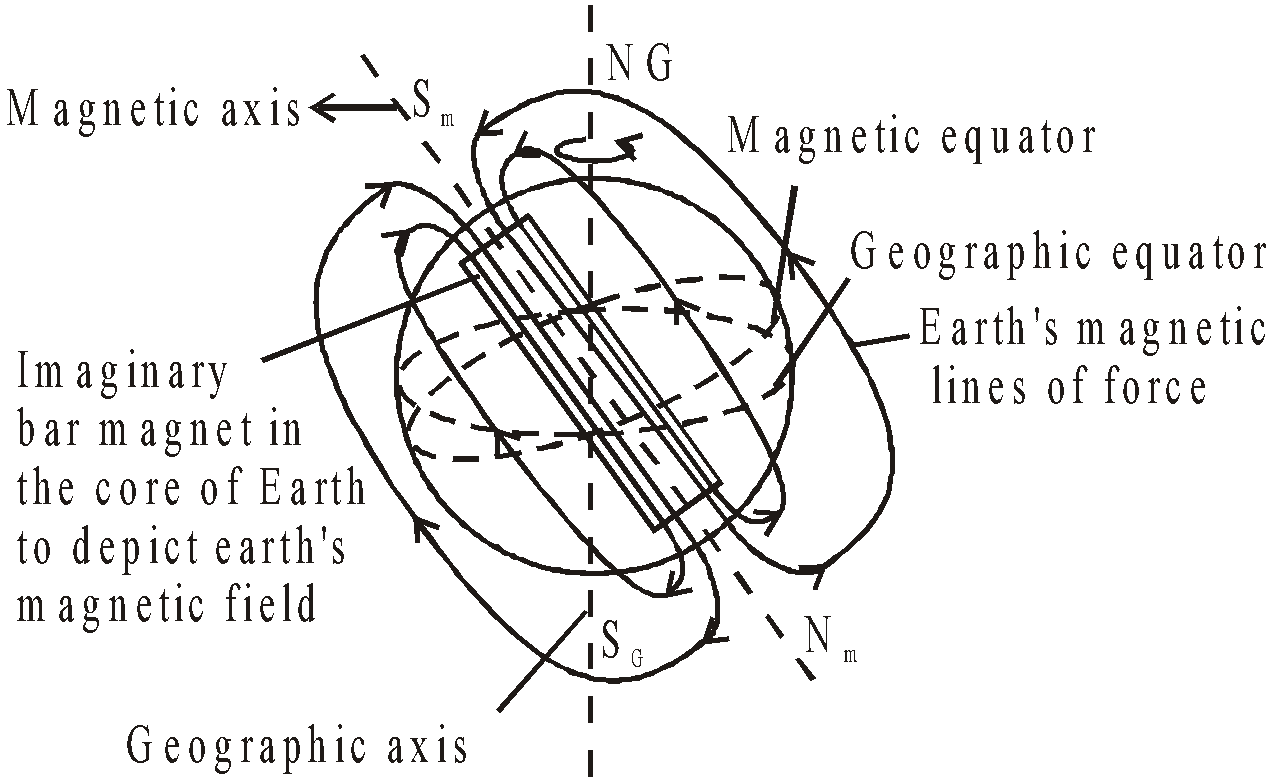 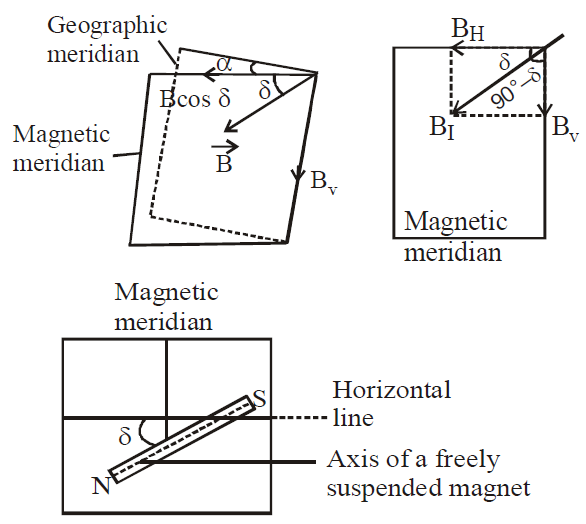 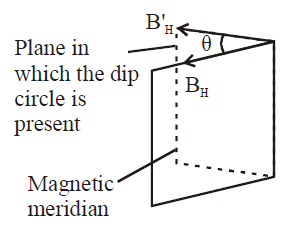 where λ is the angle of latitude 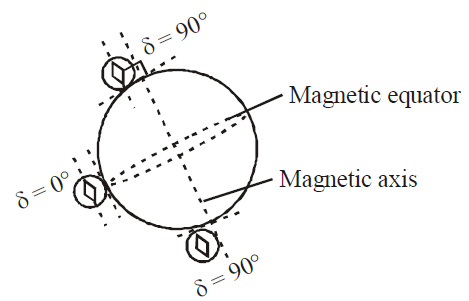 Neutral points are the points where the net field intensity due to the field of the bar magnet and field of earth is zero. When magnet is placed with its north pole towards geographic north, neutral points lie on equatorial line of the magnet. At each neutral point,

where H = horizontal component of earth’s magnetic field.
When the bar magnet is placed with its north pole towards geographic south, the neutral points lie on the axial line of the magnet. At each neutral point,

, called the `magnetic intensity’ of the field. The relation between magnetic induction B and magnetising field

, μ being permeability of medium.
INTENSITY OF MAGNETISATION (I)
When a material is placed in a magnetising field, it acquires magnetic moment M. The intensity of magnetisation is defined as the magnetic moment per unit volume i.e.,

MAGNETIC SUSCEPTIBILITY (χ) : The magnetic susceptibility is defined as the intensity of magnetisation per unit magnetising field. i.e.,

MAGNETIC PERMEABILITY (μ) : The magnetic permeability of a material is the measure of degree to which the material can be permitted by a magnetic field and is defined as the ratio of magnetic induction (B) in the material to the magnetising field  i.e.

This is required relation.

According to the behaviour of substances in magnetic field, they are classified into three categories:

These are the substances which when placed in a strong magnetic field acquire a feeble magnetism opposite to the direction of magnetising field.
Examples are copper, gold, antimony, bismuth, alcohol, water, quartz, hydrogen, etc.

Behaviour of diamagnetic substance in an external magnetic field

These are the materials which when placed in a strong magnetic field acquire a feeble magnetism in the same sense as the applied magnetic field.
Examples are platinum, aluminium, chromium, manganese, CuSO4, O2, air, etc.

Behaviour of paramagnetic substance in an external field

These are the substances which are strongly magnetised by relatively weak magnetising field in the same sense as the magnetising field.
Examples are Ni, Co, iron and their alloys.
CHARACTERISTICS OF FERROMAGNETIC SUBSTANCES
This is called Curie law. At a temperature called curie temperature, ferromagnetic substance becomes paramagnetic. The curie temperatures for Ni, Fe and Co are 360ºC, 740ºC and 1100ºC respectively.
KEEP IN MEMORY

When a bar of ferromagnetic material is magnetised by a varying magnetic field and the intensity of magnetisation Im induced is measured for different values of magnetising field H, the graph of I versus H is as shown in fig 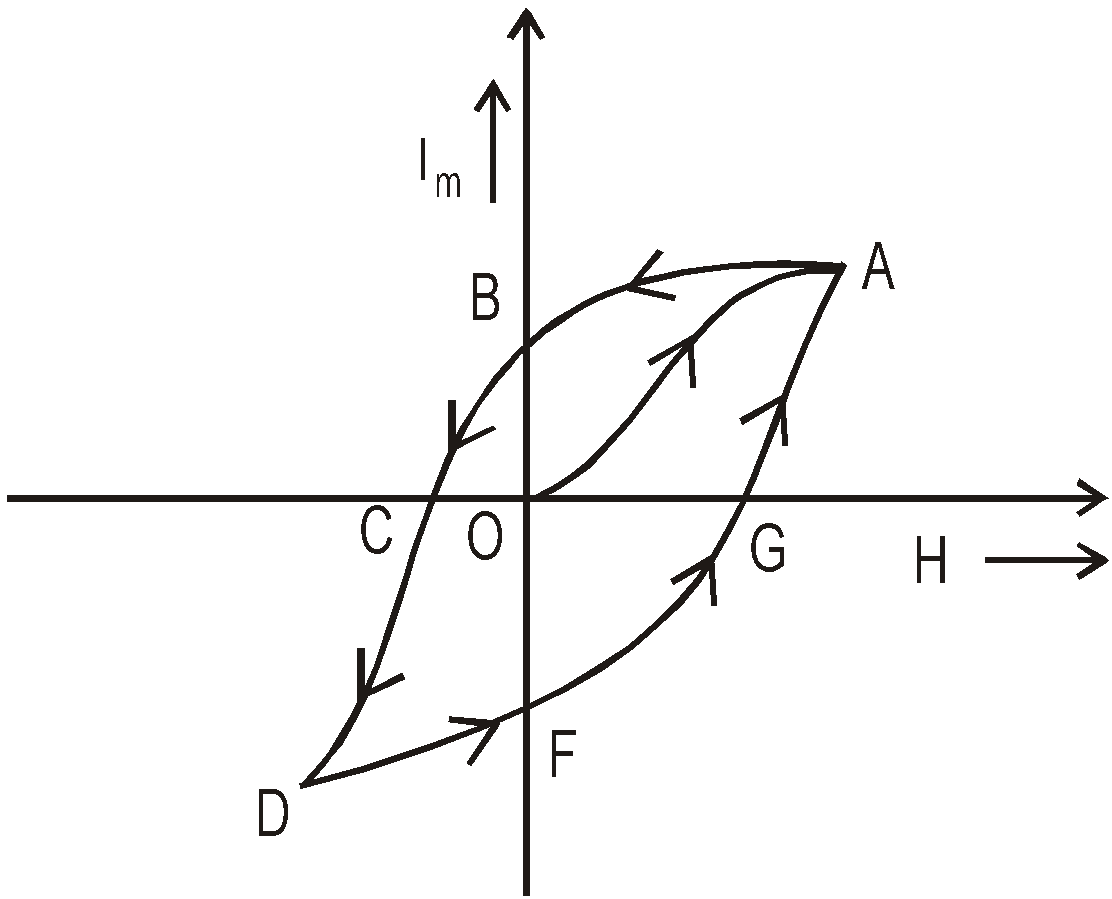 PROPERTIES OF SOFT IRON AND STEEL

For soft iron, the susceptibility, permeability and retentivity are greater while coercivity and hysteresis loss per cycle are smaller than those of steel.

Permanent magnets are made of steel and cobalt while electromagnets are made of soft iron.
An electromagnet is made by inserting a soft iron core into the interior of a solenoid. Soft iron does not retain a significant permanent magnetization when the solenoid’s field is turned off–soft iron does not make a good permanent magnet. When current flows in the solenoid, magnetic dipoles in the iron tend to line up with the field due to the solenoid. The net effect is that the field inside the iron is intensified by a factor known as the relative permeability. The relative permeability is analogous in magnetism to the dielectric constant in electricity. However, the dielectric constant is the factor by which the electric field is weakened, while the relative permeability is the factor by which the magnetic field is strengthened. The reactive permeability of a ferromagnet can be in the hundreds or even thousands–the intensification of the magnetic field is significant. Not only that, but in an electromagnet the strength and even direction of the magnetic field can be changed by changing the current in the solenoid.
KEEP IN MEMORY

It is an instrument used for measuring small current. It is based on tangent law. It is a moving magnet and fixed coil type galvanometer.
TANGENT LAW
If a small magnetic needle is under the influence of two crossed magnetic fields (B) and (H) and suffers a deflection θ from field H, then by tangent law, B = H tan θ.
FORMULA FOR CURRENT
If a current passing through the coil of n turns and mean radius r of a tangent galvanometer placed in magnetic meridian causes a deflection θ in the magnetic needle kept at the centre of the coil, then

and is called the reduction factor.

It’s working is based on the principle of tangent law.
Tan A Position
In this position the magnetometer is set perpendicular to magnetic meridian so that, magnetic field due to magnet is in axial position and perpendicular to earth’s field and hence

where d = distance of needle from centre of magnet and 2l = length of magnet.
TanB position
The arms of magnetometer are set in magnetic meridian, so that the field is at equatorial position and hence,