The locus of all particles of the medium vibrating in the same phase at a given instant is called a wavefront.
Depending on the shape of source of light, wavefront can be of three types. 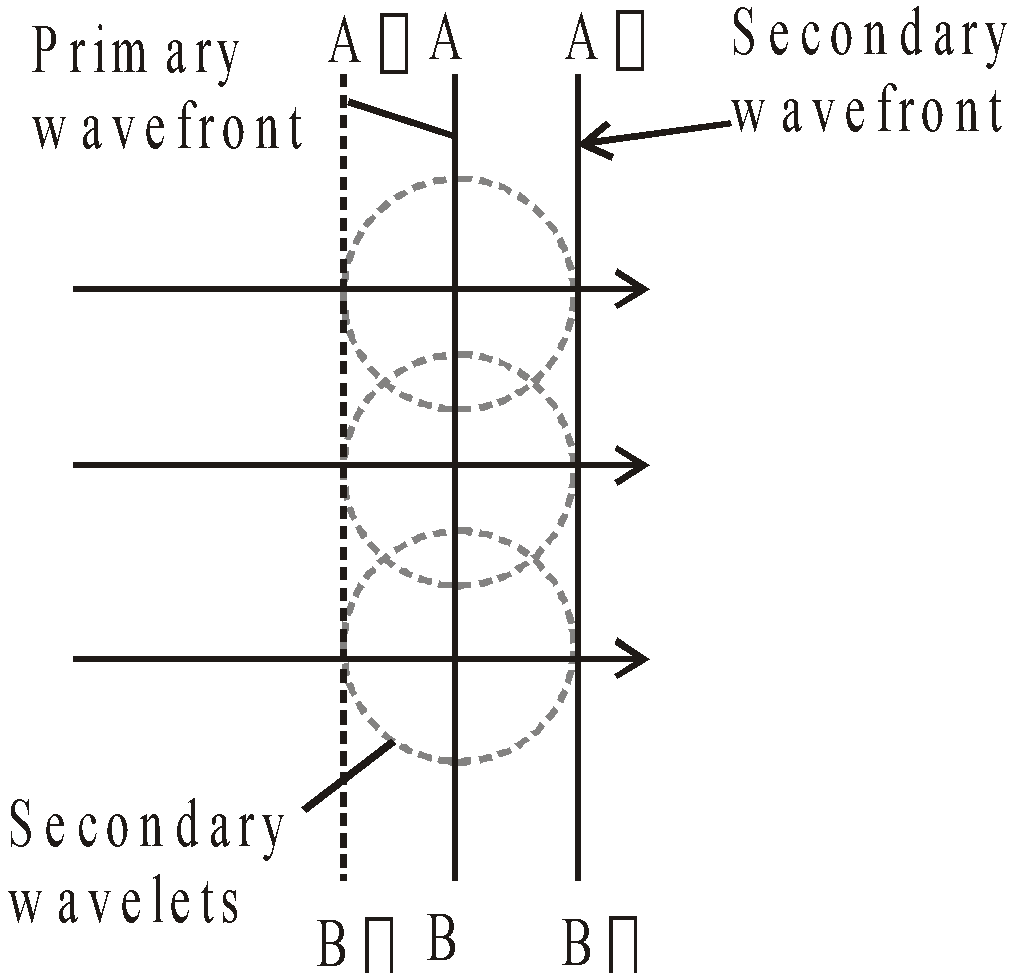 Note:- With the help of Huygen’s wave theory, law of reflection and refraction, total internal reflection and dispersion can be explained easily. This theory also explain interference, diffraction and polarization successfully.

REFLECTION ON THE BASIS OF WAVE THEORY

… (i)
where c is the velocity of light in the medium.

The secondary wavelets from A will travel the same distance c × t in the same time. Therefore, with A as centre and c × t as radius, draw an arc B′, so that
AB′ = c × t … (ii)
A′B′ is the true reflected wavefront.
angle of incidence, i =

and angle of reflection, r =

… (iii)
which is the first law of reflection.
Further, the incident wavefront AB, the reflecting surface M1M2 and the reflected wavefront A′B′ are all perpendicular to the plane of the paper. Therefore, incident ray, normal to the mirror M1M2 and reflected ray all lie in the plane of the paper. This is second law of reflection.

REFRACTION ON THE BASIS OF WAVE THEORY 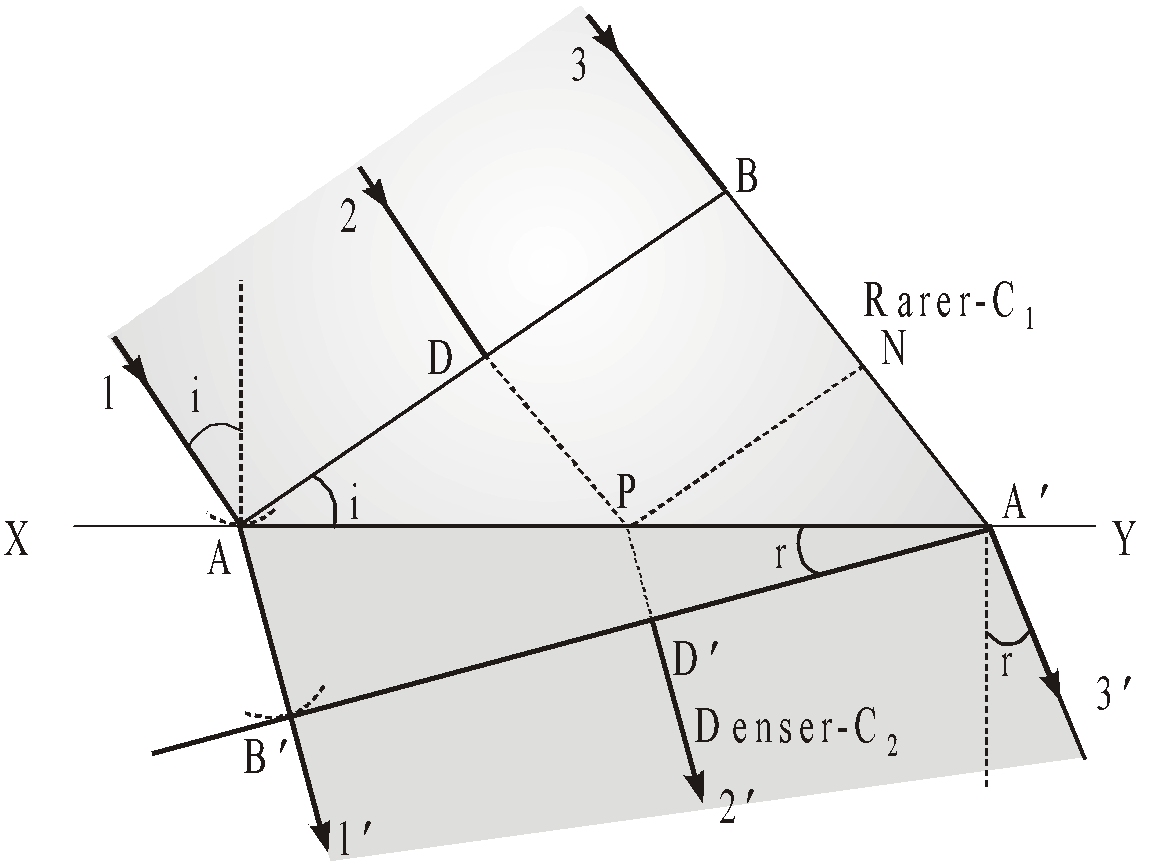 AB is a plane wave front incident on XY at

. 1, 2, 3 are the corresponding incident rays normal to AB.
According to Huygens principle, every point on AB is a source of secondary wavelets. Let the secondary wavelets from B strike XY at A′ in t seconds.
∴  BA′ = c1 × t … (v)
The secondary wavelets from A travel in the denser medium with a velocity c2 and would cover a distance (c2 × t) in t seconds. A′B′ is the true refracted wavefront. Let r be the angle of refraction. As angle of refraction is equal to the angle which the refracted plane wavefront A′B′ makes with the refracting surface AA′, therefore, .
Let

… (vi)
which proves Snell’s law of refraction.
It is clear from fig. that the incident rays, normal to the interface XY and refracted rays, all lie in the same plane (i.e., in the plane of the paper). This is the second law of refraction.
Hence laws of refraction are established on the basis of wave theory.
KEEP IN MEMORY

Let the equation of waves travelling from are

…(2)
where A1 & A2 are amplitudes of waves starting  from S1 & S2 respectively. These two waves arrive at P by traversing different distances S2P & S1P. Hence they are superimposed with a phase difference (at point P) given by

(A) CONDITIONS FOR MAXIMUM & MINIMUM INTENSITY

….(5)
It means that resultant intensity is greater than the sum of individual intensity ( where A is the amplitude of resultant wave at point P).
CONDITIONS FOR MINIMUM INTENSITY OR DESTRUCTIVE INTERFERENCE
If phase difference,

then resultant intensity at point P is

…(6)
It means that resultant intensity I is less than the sum of individual intensities. Now as the position of point P on the screen changes, then the path difference at point P due to these two waves also changes & intensity alternately becomes maximum or minimum. These bright fringes (max. intensity) & dark fringes (min. intensity) make an interference pattern.
It must be clear that there is no loss of energy (at dark fringe) & no gain of energy (at bright fringe), but only there is a redistribution of energy.
The shape of fringe obtained on the screen is approximately linear.

(B) POSITION OF FRINGE

If Δ = S2P – S1P = nλ, then we obtain bright fringes at point P on the screen and it corresponds to constructive interference. So from equation (4) the position of nth bright fringe

, then we obtain dark fringe at point P on the screen and corresponds to destructive interference. So from equation (4), the position of, nth dark fringe is

A light wave (photon) is produced when an excited atom goes to the ground state and emits light.
For neon 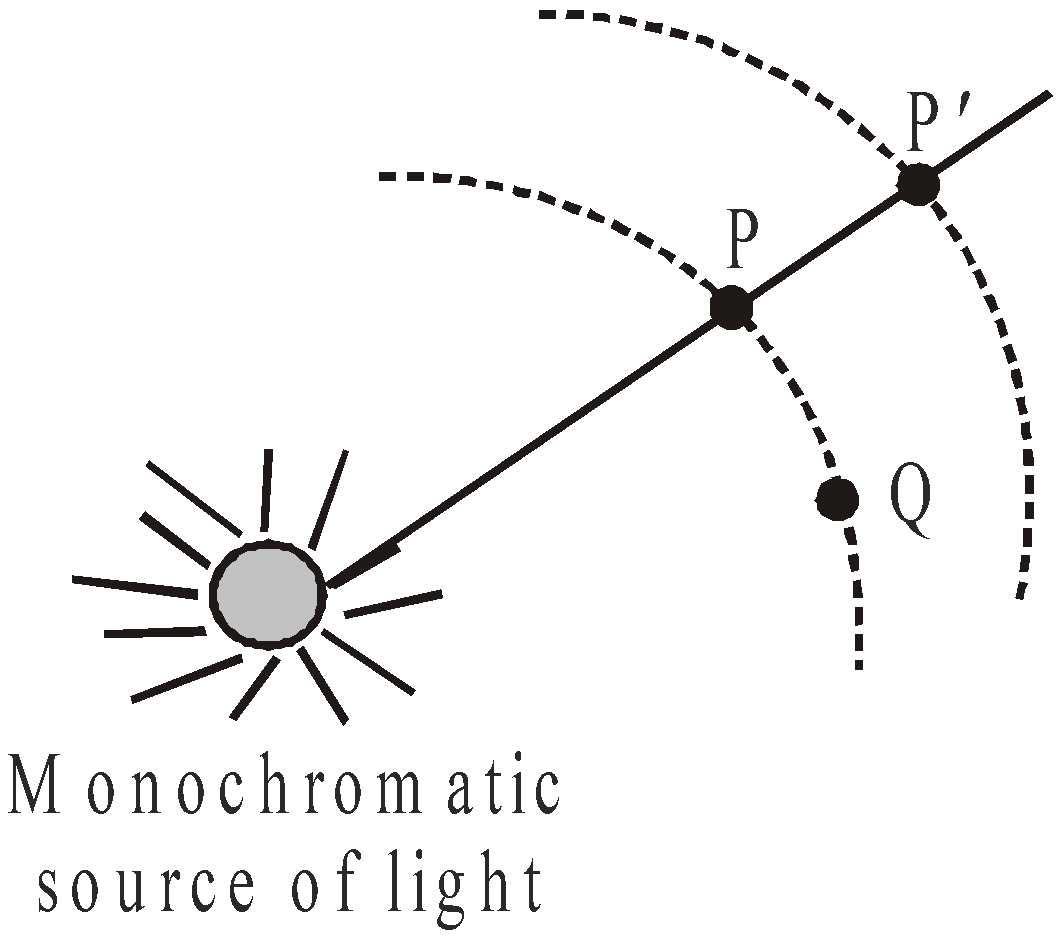 Two coherent sources are produced from a single source of light by two methods :
DIVISION OF WAVEFRONT
The wavefront emitted by a narrow source is divided in two parts by reflection, refraction or diffraction. The coherent sources so obtained are imaginary. Example : Fresnel’s biprism, Llyod’s mirror, Young’s double slit, etc.
DIVISION OF AMPLITUDE
In this arrangement light wave is partly reflected (50%) and partly transmitted (50%) to produced two light rays. The amplitude of wave emitted by an extended source of light is divided in two parts by partial reflection and partial refraction. The coherent sources obtained are real and are obtained in Newton’s rings, Michelson’s interferometer, etc.

Let two conventional light sources L1 and L2 (like two sodium lamps or two monochromatic bulbs) illuminate two pin holes S1 and S2. Then we will find that no interference pattern is seen on the screen.
The reason is as follows : In conventional light source, light comes from a large number of independent atoms, each atom emitting light for about 10–9 seconds i.e., light emitted by an atom is essentially a pulse lasting for only 10–9 seconds. 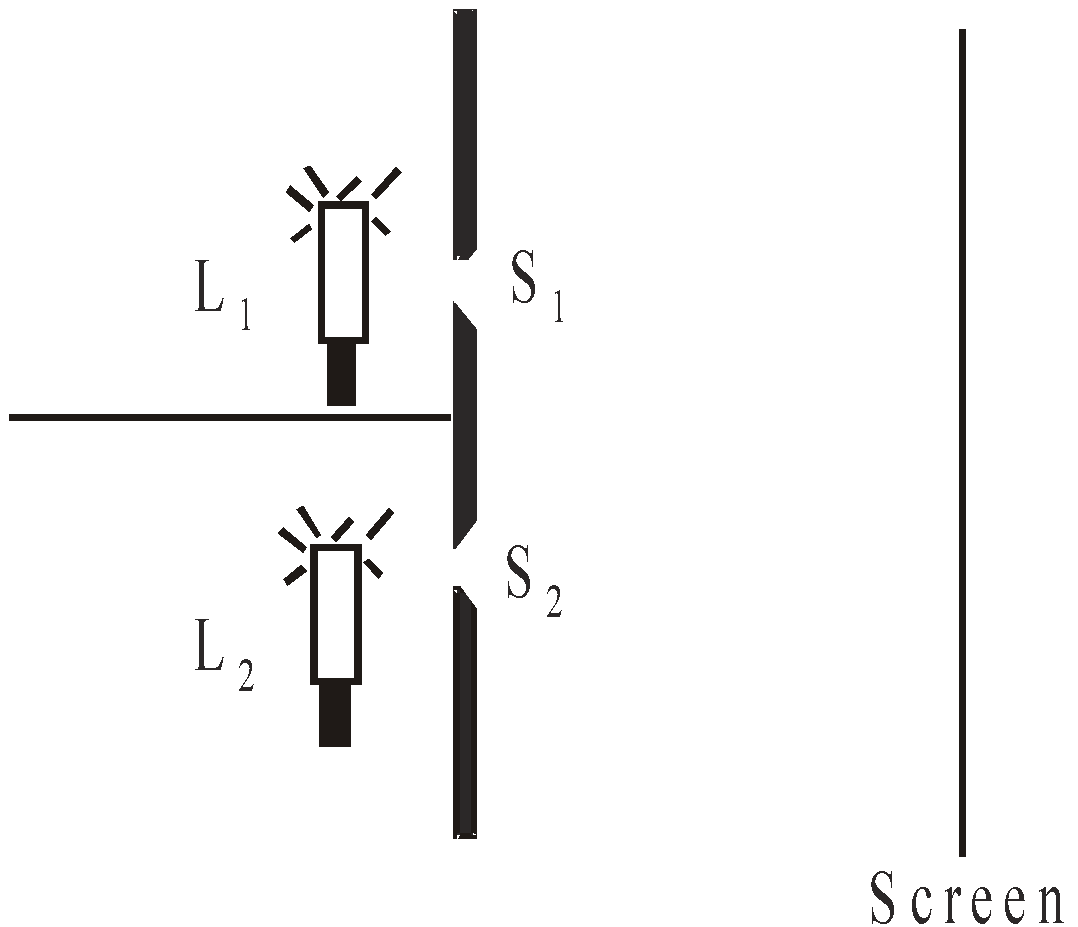 Even if all the atoms were emitting light pulses under similar conditions, waves from different atoms would differ in their initial phases. Consequently light coming out from the holes S1 and S2 will have a fixed phase relationship only for 10–9 sec. Hence any interference pattern formed on the screen would last only for 10–9 sec. (a billionth of a second), and then the pattern will change. The human eye can notice intensity changes which last at least for a tenth of a second and hence we will not be able to see any interference pattern. Instead due to rapid changes in the pattern, we will only observe a uniform intensity over the screen.

The two sources are slit S (parallel to mirror) and its virtual image S’. 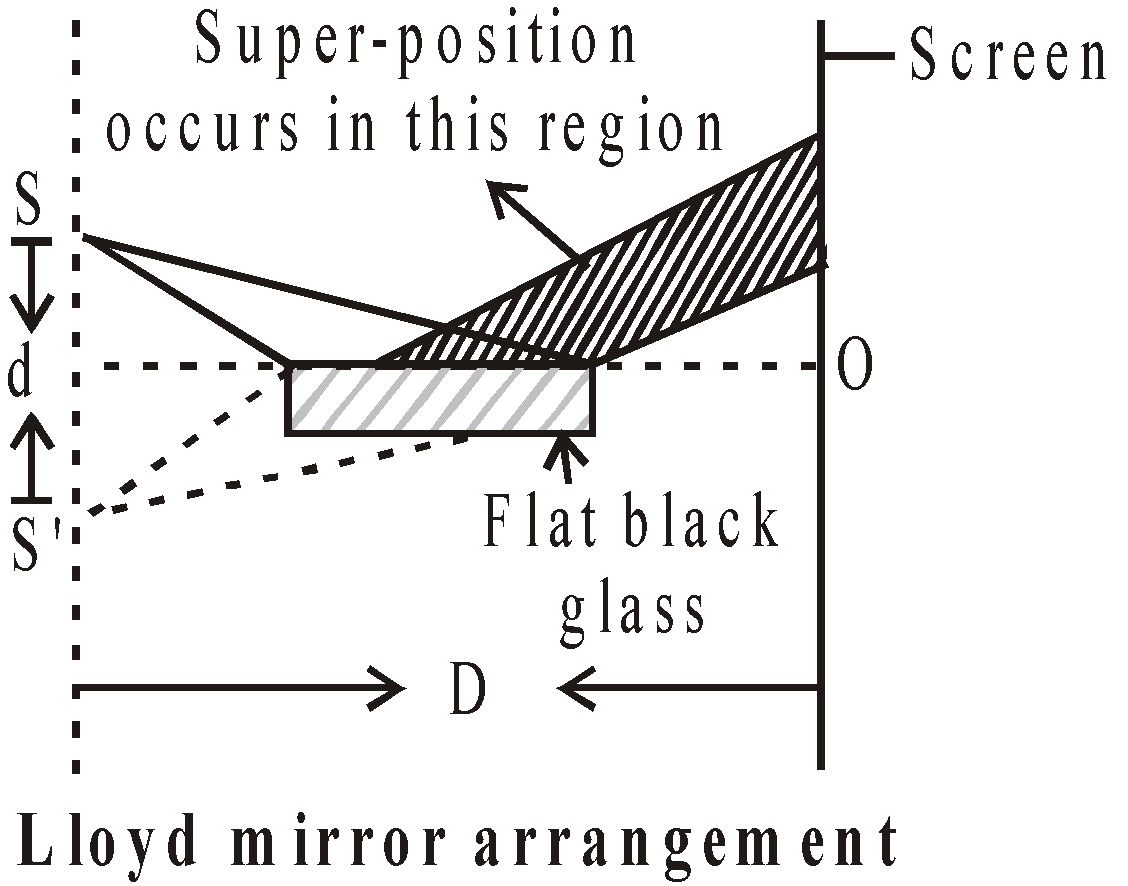 Optical path : (Equivalent path in vacuum or air) In case of medium of refractive index μ and thickness t, the optical path = μt.

We are familiar with the colours produced by a thin film of oil on the surface of water and also by the thin film of a soap bubble. Hooke observed such colours in thin films of mica and similar thin transparent plates. Young was able to explain the phenomenon on the basis of interference between light reflected from the top and bottom surface of a thin film. It has been observed that interference in the case of thin films takes place due to

INTERFERENCE DUE TO REFLECTED LIGHT 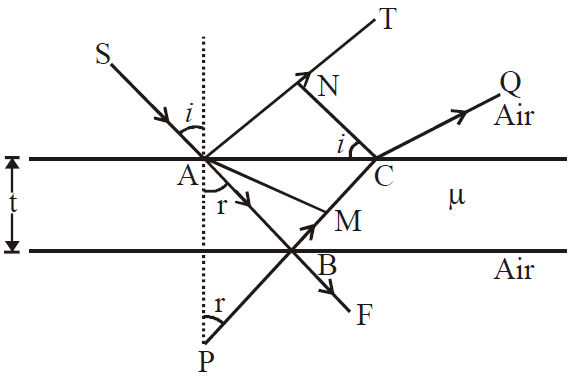 On simplification, we get x = 2μt cos r

INTERFERENCE DUE TO TRANSMITTED LIGHT 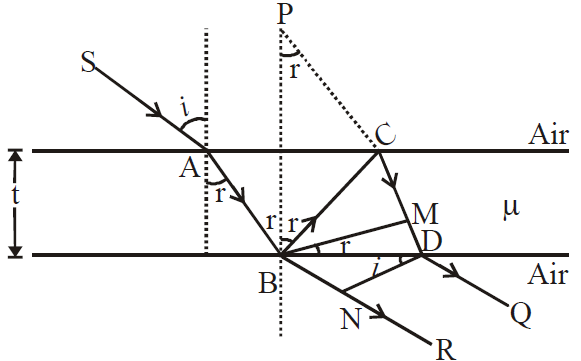 Proceeding further, we get the radius of rings as follows:
for bright rings,

Proceeding further, we get
Radius of bright ring,

When a wave is obstructed by an obstacle, the rays bend round the corner. This phenomenon is known as diffraction.

In Fraunhofer diffraction experiment, the source and the screen are effectively at infinite distance from the diffracting element.
In single slit diffraction, imagine aperture to be divided into two equal halves. Secondary sources in these two halves give first minima at b sin θ = λ 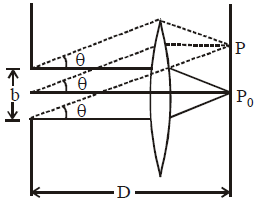 In general, b sin θ = nλ for minima and, 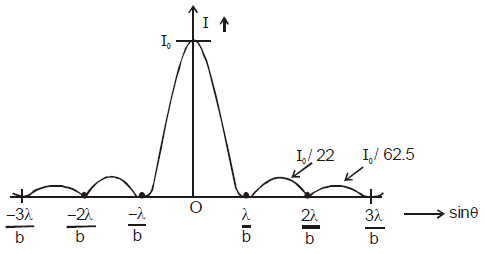 FRAUNHOFER DIFFRACTION BY A CIRCULAR APERTURE

where λ = wavelength of light used, b = diameter of circular aperture

This radius is also called the radius of diffraction disc.
For plane transmission diffraction grating
(a + b) sin θn = nλ  for maxima, where a = width of transparent portion, b = width of opaque portion.

DIFFERENCE BETWEEN INTERFERENCE AND DIFFRACTION OF LIGHT 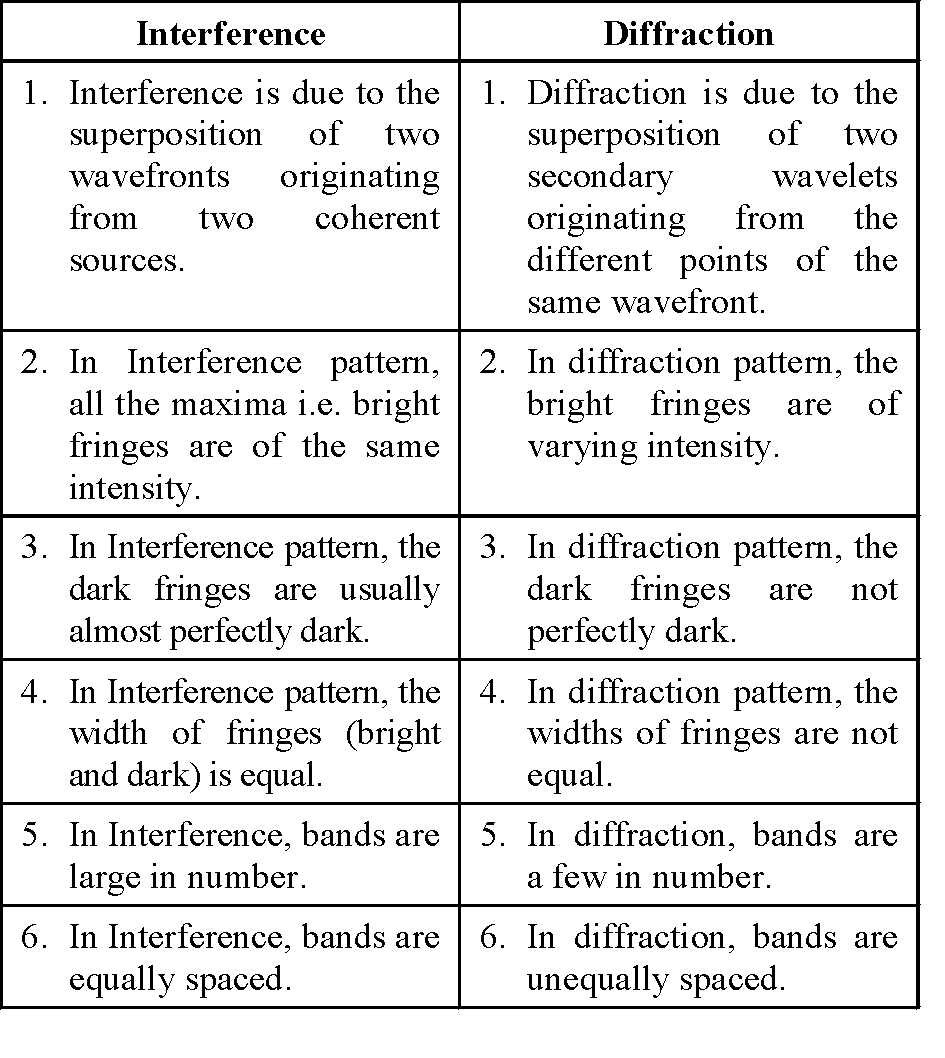 An ordinary source such as bulb consists of a large number of waves emitted by atoms or molecules in all directions symmetrically. Such light is called unpolarized light (see fig – a)

and plane of polarisation is perpendicular to the plane of vibration
Tourmaline and calcite polarises an e.m. wave passing through it.

During reflection of a wave, we obtain a particular angle called angle of polarisation, for which the reflected light is completely plane polarised. 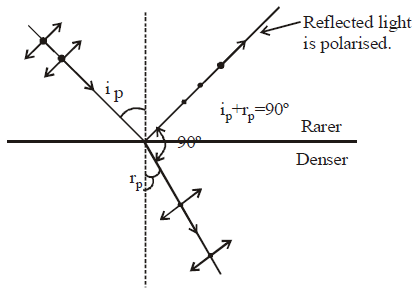 μ = tan (ip)
where, ip = angle of incidence, such that the reflected and refracted waves are perpendicular to each other.

RESOLVING POWER OF AN OPTICAL INSTRUMENT

where a is the aperture of the microscope.

When the source moves away from the stationary observer or vice-versa, the apparent frequency