BASIC FUNCTION OF EACH BLOCK

BASIC FUNCTION OF EACH BLOCK
KEEP IN MEMORY

PROPAGATION OF ELECTROMAGNETIC WAVES IN ATMOSPHERE 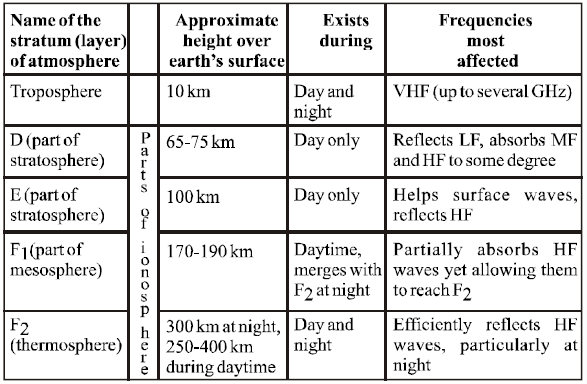 In this mode, the radio waves are directed by the earth and they travel along the curved surface of earth from the transmitter to the receiver.
EO : the unit distance field strength at the surface of earth.
d   : the distance from transmitting to receiving antenna
A   : the factor taking into account losses caused by the earth.
KEEP IN MEMORY
Surface wave propagation is possible for frequencies upto 500 kHz, that can propagate upto a distance of 1500 km because attenuation of ground waves increases with increase in frequency of waves.
For local region propagation upto 15 MHz frequency is possible.

Also known as tropospheric propagation find its wide scope at frequencies like V.H.F, U.H.F and microwaves.
In this mode, the radio waves are transmitted from the transmitting antenna at a small angle with the earth’s surface, which reaches the receiving antenna in following three ways: 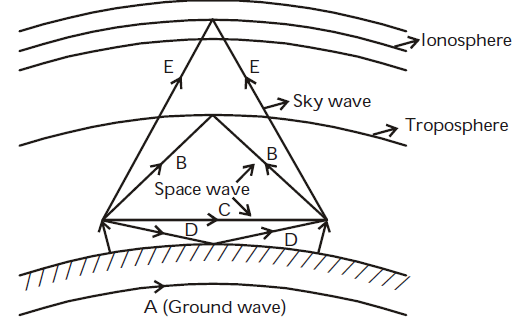 Fig (1) : Modes of Propagation of radio waves.
When e.m. wave passes through the ionosphere, the electric – component of waves exerts a force on the electrons and thus electrons starts oscillating along path parallel to electric field of wave.
Let electric field across m3 of space in ionosphere be E = Em sinωt
Force on each e– is F = – qe newton
Instantaneous velocity of e– is

The effective value of dielectric constant

The refractive index of ionised medium

For n < 1 the ionised medium behaves as raw medium, so waves entering the medium deviates away from straight path.
If

is angle of incidence,

angle of refraction, then

This frequency fc is the critical frequency of e.m. wave which is max-frequency for which the wave gets reflected back.
KEEP IN MEMORY
If the transmitting and receiving antennas are placed at heights Ht and Hr , the maximum range of space wave communication is 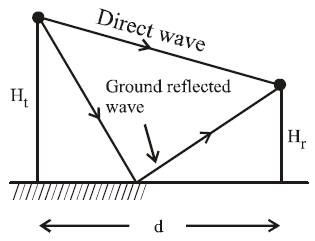 Fig (2) : Direct and ground reflected wave of space wave.
For calculation of distance between the transmitting and receiving antenna, equation (2) is further modified as

….(3)
considering that the space wave propagate along straight path and the earth’s effective radius is 4/3 times the actual radius.

MODULATION AND ITS NEEDS

By the process of modulation, the properties of high frequency carrier wave like amplitude, frequency, phase etc are changed corresponding to the instantaneous value of low frequency audio waves. 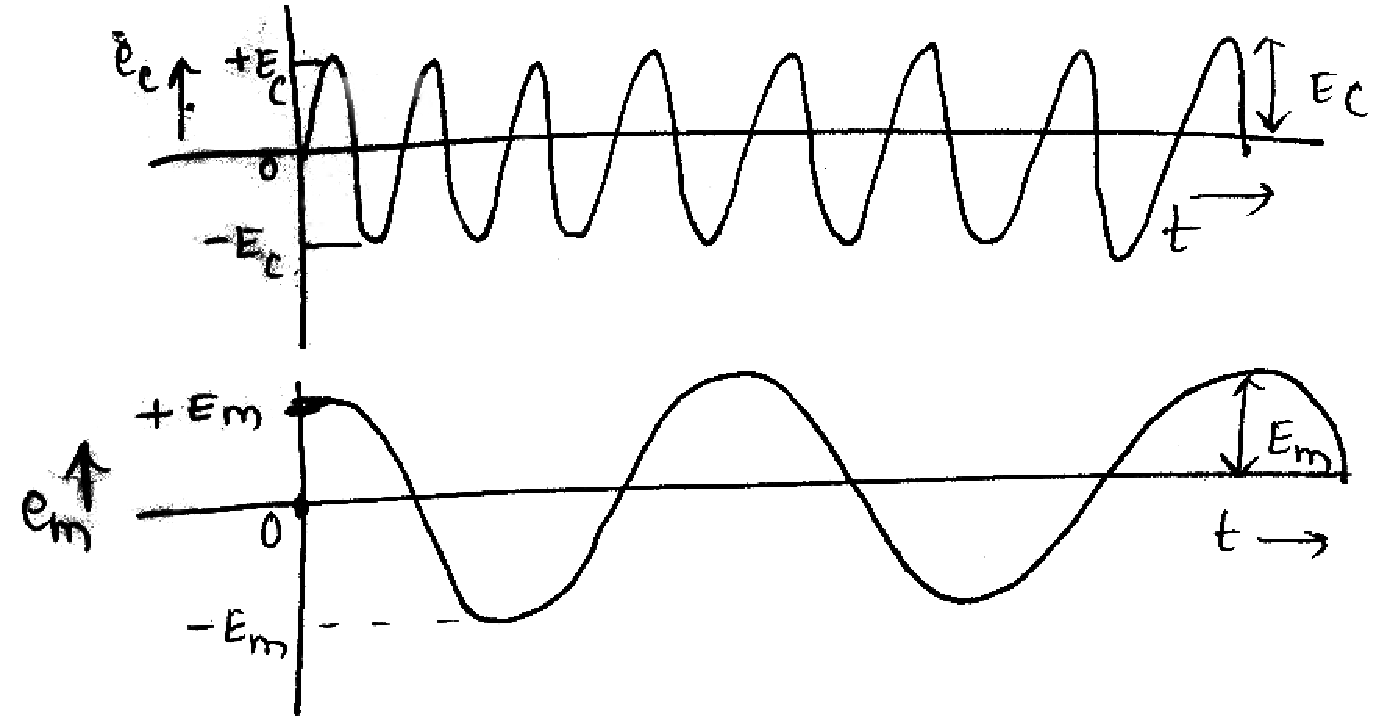 is called the modulation factor /depth of modulation.
DEPTH OF MODULATION

Greater the value of ma, more clear and intense is the superposition of modulating wave over the carrier.
then KaEm

when one modulating wave has maximum-ve amplitude the amplitude of modulated wave is zero. 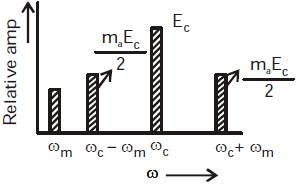 CAUTION
Please take into consideration that the audio signal is inherent only in the side frequency spectrum and it does not lie in the carrier frequency component.

AM can be done by the following two methods :
KEEP IN MEMORY

In this type of modulation the frequency of the carrier voltage is varied in accordance with the instantaneous value of the modulating voltage.
Let modulating signal em = Em cosωmt
Carrier signal           ec = Ec sin (ωc t + θ)
∴ Modulated signal

In actual practice the modulating signal (i.e. audio signal is not perfectly sinusoidal, but consists of various nearly frequency signal, on either side of carrier wave, use a pair of side frequency (ωc – ωm) and (ωc + ωm). These groups of side frequencies are called side bands.
AM-SIDEBANDS
Let modulating signal be of 5 kHz , carrier signal of 1 MHz
∴      Side-frequency components are
LSF = 1 MHz – 5 kHz = 995 kHz
USF =1 MHz + 5 kHz= 1005 kHz
∴      Channel width = 1005 – 995 = 10 kHz
AM-SIDEBAND TRANSMISSION
It is found that it is not necessary to transmit all the signals one carrier and two sidebands) to enable the receiver to reconstruct the original signal.
Suppression of carrier and sidebands may be done by two process :
Former suppressed only the carrier while later suppresses one of the sideband and the carrier.
MERITS OF SSB-SC
DEMERITS OF SSB-SC
Transmitter and receiver become more complex.
APPLICATION OF SSB-SYSTEM
GENERATION OF SSB SYSTEM
FM-SIDE BAND
The frequency components of FM wave are :
ωo/fo
ωo± ωm / f0 ± fm
ωo ± 2ωm /  fo ± 2fm
ωo ± 3ωm /  fo ± 3fm and so on.
Bandwidth occupied by spectrum; BW = 2n fm.
n is the highest order of the significant sideband.
BW occupied by spectrum = 2(mf + 1)fm = 2(Δf + fm)
The above expression requires that mf > 6 i.e. the side bands of amplitudes < 5% of unmodulated carrier is negligible.
FM FREQUENCY SPECTRUM