Gravitational force is an attractive force between any two point masses M1 and M2 separated by any distance r.
It is given by F = G

ACCELERATION DUE TO GRAVITY (g)

……(i)
where   Me = mass of earth
r = distance of the body from the centre of earth.
The force of gravity can be written as F = mg ……(ii)
where g is called the acceleration due to gravity.
From the expression (i) and (ii), we get

……(iv)
where ρ is the density of earth.
This is the relation between universal gravitational constant ‘G’ and acceleration due to gravity ‘g’.

CHANGE IN THE VALUE OF ACCELERATION DUE TO GRAVITY (g)

Let us consider a particle P at rest on the surface of earth at a latitude φ. 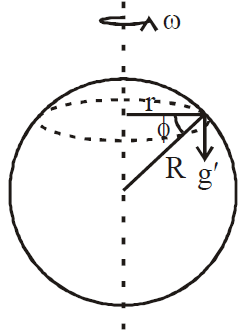 If a body is taken at a depth d below the earth surface, then the body is attracted by inner core of mass M’ of earth radius (Re– d). Then acceleration due to gravity at point P is

At a height h above the earth surface, the acceleration due to gravity is

This system may be considered to be made up of two mass each separated by 2R distance.
If the earth starts rotating at the angular speed of about 17 times the present value, there will be weightlessness on equator, but g at the poles will remain unchanged. In such a case, the duration of the day will be about 84 min.

…(i)
where m = test mass
r = distance between M and m
The direction of Eg always points towards the mass producing it.
The gravitational field can be represented by gravitational lines of force.
The S.I unit of Eg is newton/kg. Its dimensions are [M0LT–2].
GRAVITATIONAL INTENSITY (Eg) FOR SPHERICAL SHELL 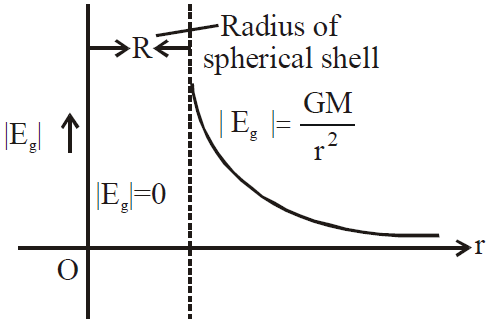 It is clear that as r increases, Eg decreases.
GRAVITATIONAL INTENSITY FOR SOLID SPHERE 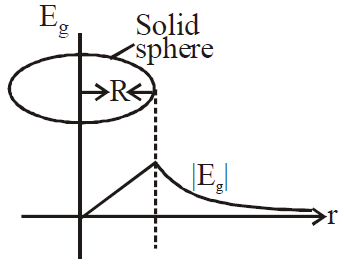 Gravitational potential at any point is the work done by gravitational force in carrying a body of unit mass from infinity to that point in gravitational influence of source. i.e.,

where r is the distance of point from source mass M.
The S.I. unit of V is joule/kg. Its dimensions are [M0L2T–2]. It is a scalar quantity.
GRAVITATIONAL POTENTIAL AT THE EARTH SURFACE 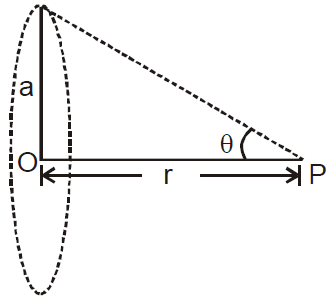 GRAVITATIONAL POTENTIAL DUE TO A UNIFORM THIN SPHERICAL SHELL 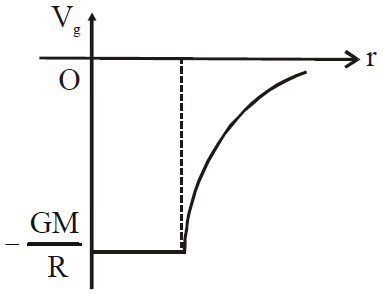 where R = radius of spherical shell.
Potential due to a uniform spherical shell is constant throughout the cavity of the shell.
GRAVITATIONAL POTENTIAL DUE TO A UNIFORM SOLID SPHERE 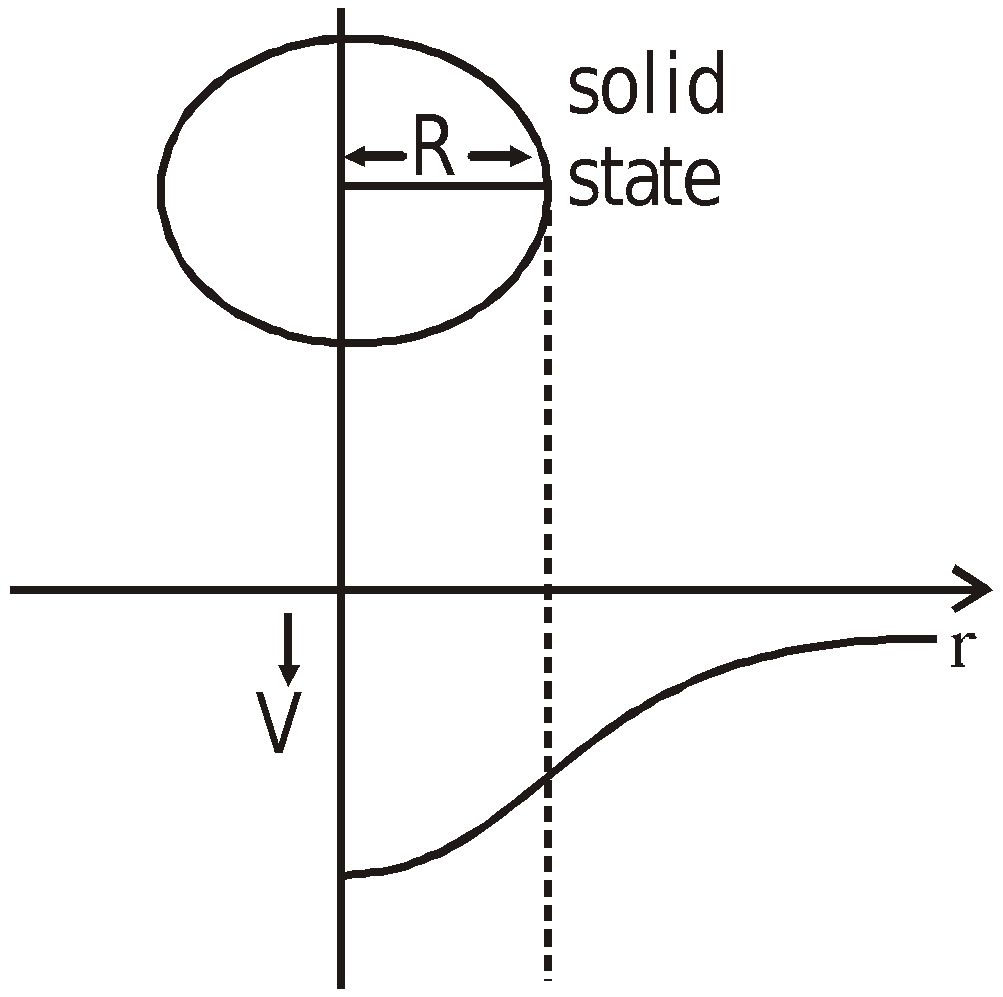 So, work done = mgh is stored in the particle as particle potential energy, when kept at height ‘h’.

A satellite is any body revolving around a large body under the gravitational influence of the latter.
The period of motion T of an artificial satellite of earth at a distance h above the surface of the earth is given by,

where, Re = radius of the earth
where,    g = acceleration due to gravity on the surface of the earth.
If Re > > h, then

Assuming Re + h = r, the distance of the satellite from the centre of the earth,

Let a satellite of mass m revolve around the earth in circular orbit of radius r with speed v0. The gravitational pull between satellite and earth provides the necessary centripetal force.
Centripetal force required for the motion =

For satellite motion, angular momentum will be given by

i.e., L = [m2GMr]1/2
Angular momentum of a satellite depends on both, the mass of orbiting and central body. It also depends on the radius of the orbit.

ENERGY OF A SATELLITE

Total energy of satellite revolving in an orbit of radius r around the earth can be calculated as follows :
The negative sign shows that satellite cannot leave the orbit itself. It requires an energy equal to

, which is called Binding Energy (B.E.) of satellite.

A satellite which appears to be stationary for a person on the surface of the earth is called geostationary satellite.
It is also known as parking satellite or synchronous satellite.

]
So by conservation of energy

Each planet revolves about the sun in an elliptical orbit with the sun at one of the foci of the ellipse. 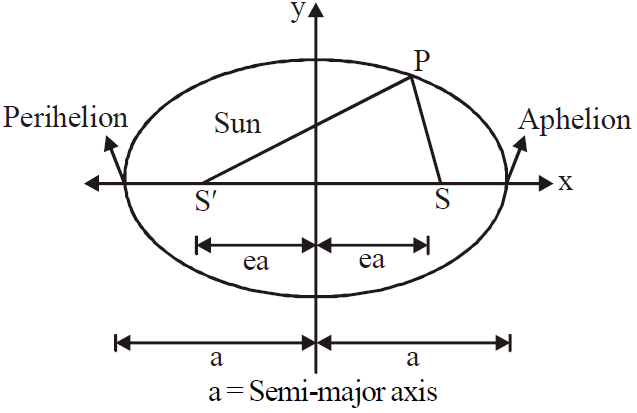 A planet of mass m moving in an elliptical orbit around the sun. The sun of mass M, is at one focus S′ of the ellipse. The other focus is S, which is located in empty space. Each focus is at distance ‘ea’ from the ellipse’s centre, with ‘e’ being the eccentricity of the ellipse and ‘a’ semimajor axis of the ellipse, the perihelion (nearest to the sun) distance rmin., and the aphelion (farthest from the sun) distance rmax. are also shown.
rmax = a + e a = (1 + e) a
rmin = a – e a = (1 – e) a
The distance of each focus from the centre of ellipse is ea, where e is the dimensionless number between 0 to 1 called the eccentricity. If e = 0, the ellipse is a circle.
For earth e = 0.017.

An imaginary line that connects a planet to the sun sweeps out equal areas in the plane of the planet’s orbit in equal times.
i.e., the rate dA/dt at which it sweeps out area A is constant.

The square of the period of revolution of any planet is proportional to the cube of the semi-major axis of the orbit.
i.e.,   T2 ∝ r3.
or,

i.e., it is falling towards earth’s centre with acceleration a,
so apparent weight of the body in it Wap = m(g´ – a)
where g´ is the acceleration due to gravity of earth at the position (height) of satellite, i.e. g´ = (GM/r2), so that

i.e., the apparent weight of a body in a satellite is zero and is independent of the radius of the orbit.
KEEP IN MEMORY