Two systems are said to be in thermal equilibrium with each other if they have the same temperature.

First law of thermodynamics gives a relationship between heat, work and internal energy.

It is the energy which is transferred from a system to surrounding or vice-versa due to temperature difference between system and surroundings.

It is the energy that is transmitted from one system to another by a force moving its points of application. The expression of work done on a gas or by a gas is

where V1 is volume of gas in initial state and V2 in final state. 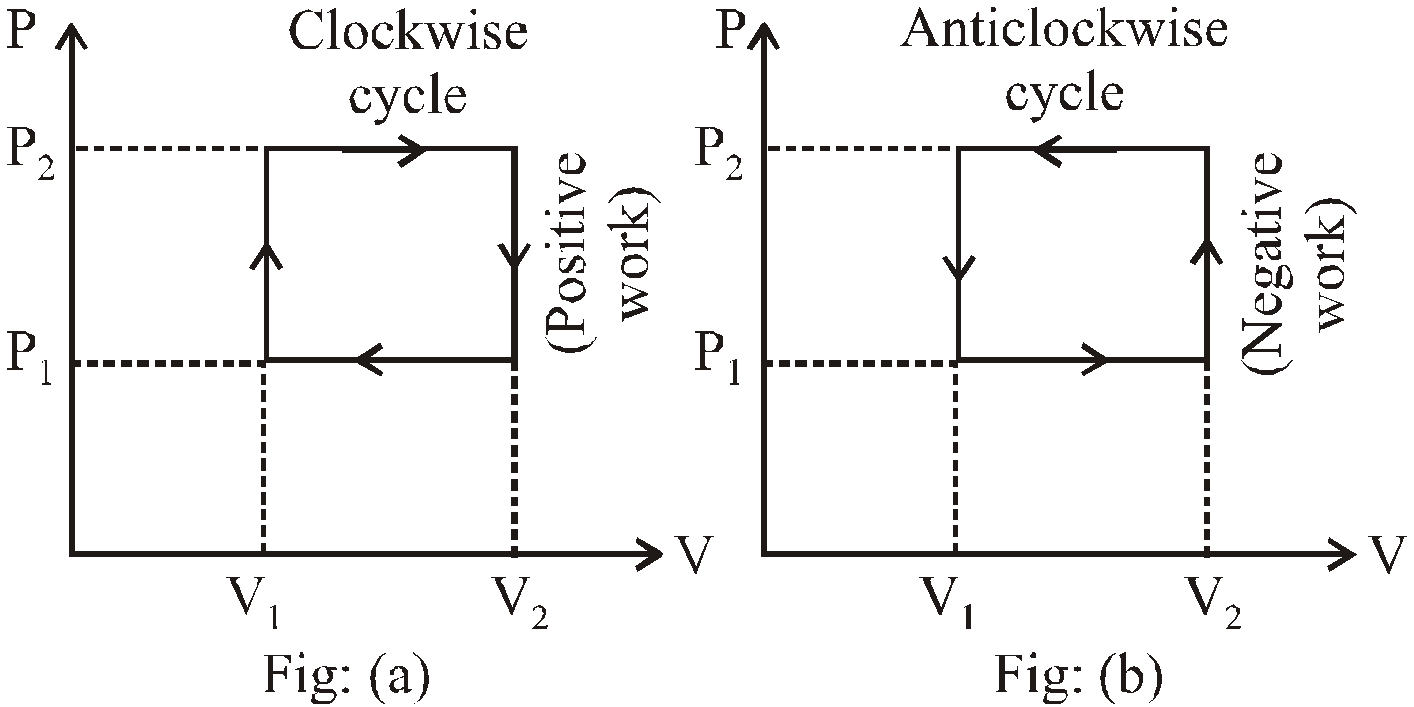 First law of thermodynamics is a generalisation of the law of conservation of energy that includes possible change in internal energy.

If certain quantity of heat dQ is added to a system, a part of it is used in increasing the internal energy by dU and a part is use in performing external work done dW
i.e.,

APPLICATIONS OF FIRST LAW OF THERMODYNAMICS

(for ideal gas)
It means that heat given to system is used in increasing internal energy of the gas.

If a thermodynamic system is perfectly conducting to surroundings and undergoes a physical change in such a way that temperature remains constant throughout, then process is said to be isothermal process.

For isothermal process, the equation of state is
PV = nRT = constant, where n is no. of moles.
For ideal gas, since internal energy depends only on temperature.

If system is completely isolated from the surroundings so that no heat flows in or out of it, then any change that the system undergoes is called an adiabatic process.

A process taking place at constant volume is called isochoric process.
In this process, dQ = dU =n CVdT and dW = 0

In this process the initial state and final state after traversing a cycle (shown in fig.) are same.
In cyclic process, dU = 0 = Uf – Ui and dW = area of cycle = area (abcd) 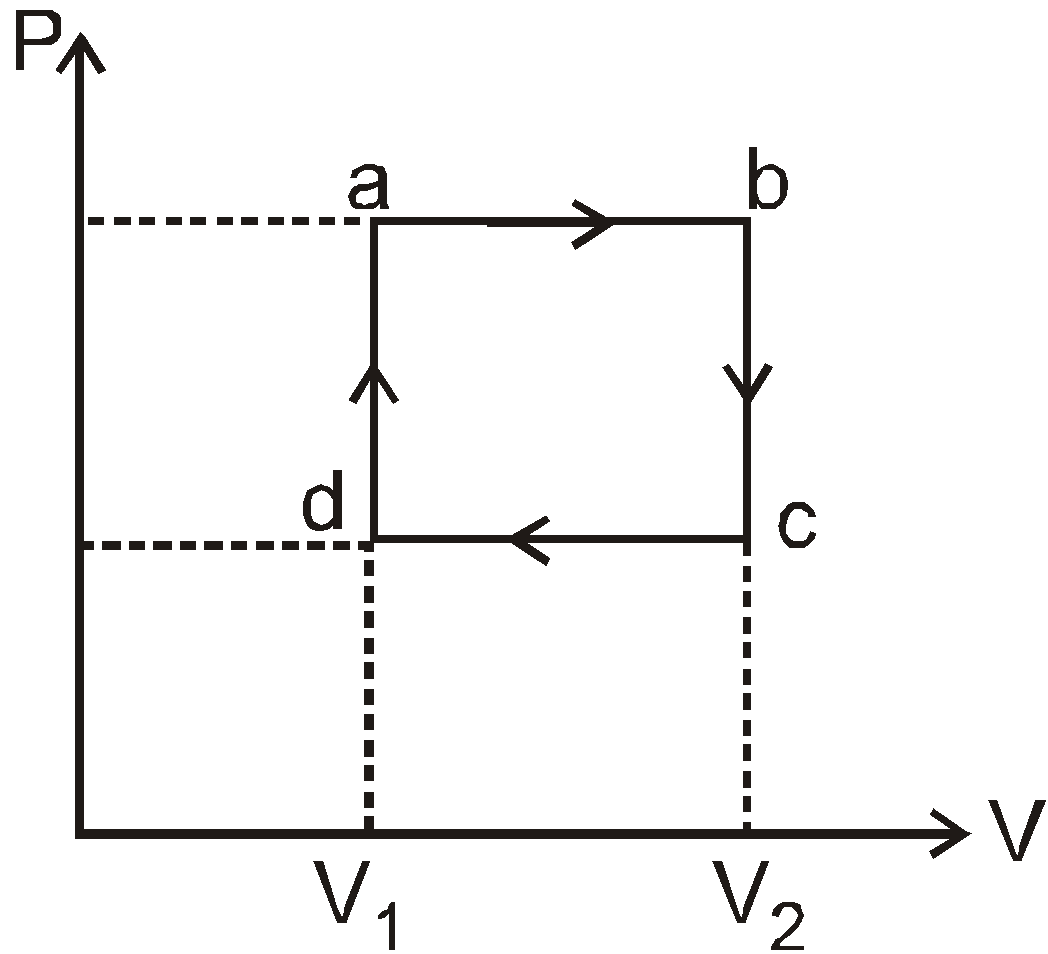 For adiabatic process PVγ = constant
On differentiation, we get slope of adiabatic curve

…. (2)
It is clear from equation (1) and (2) that the slope of adiabatic curve is more steeper than isothermal curve as shown by fig by γ time (γ = CP/CV) 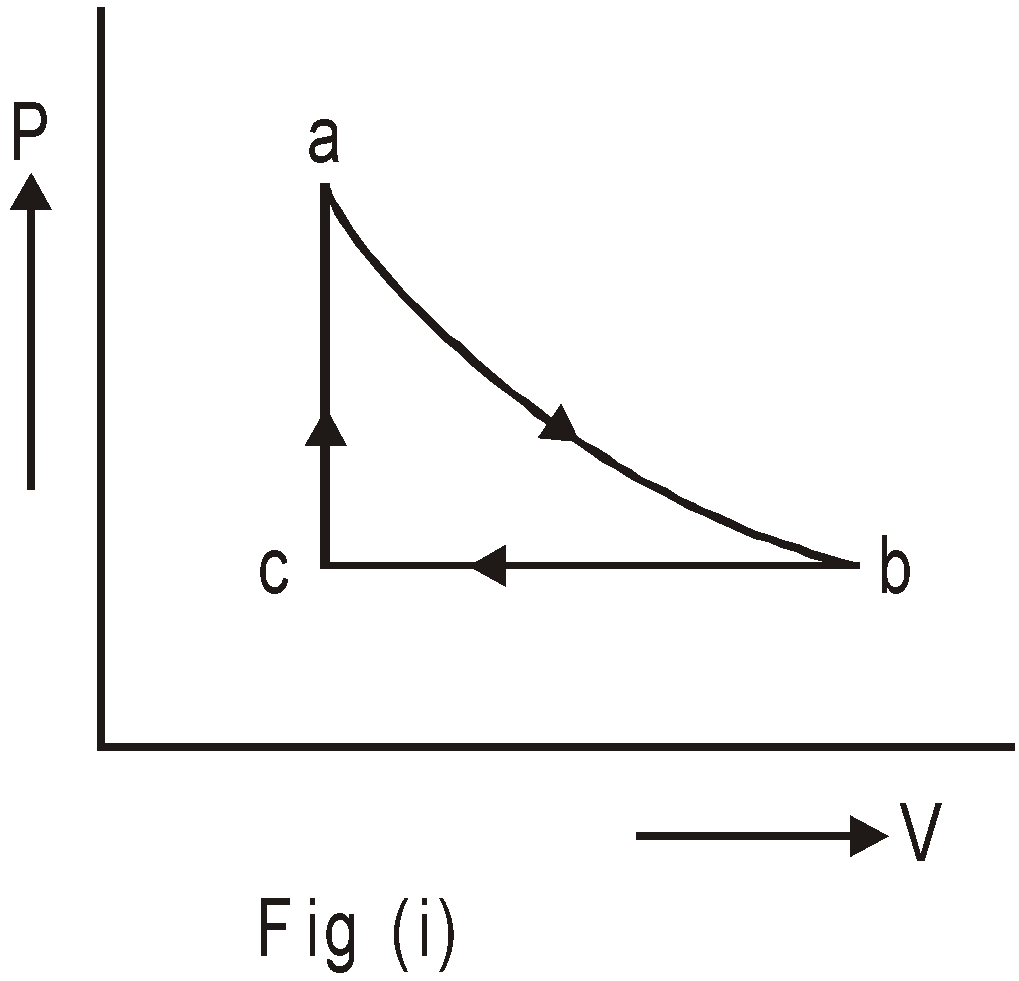 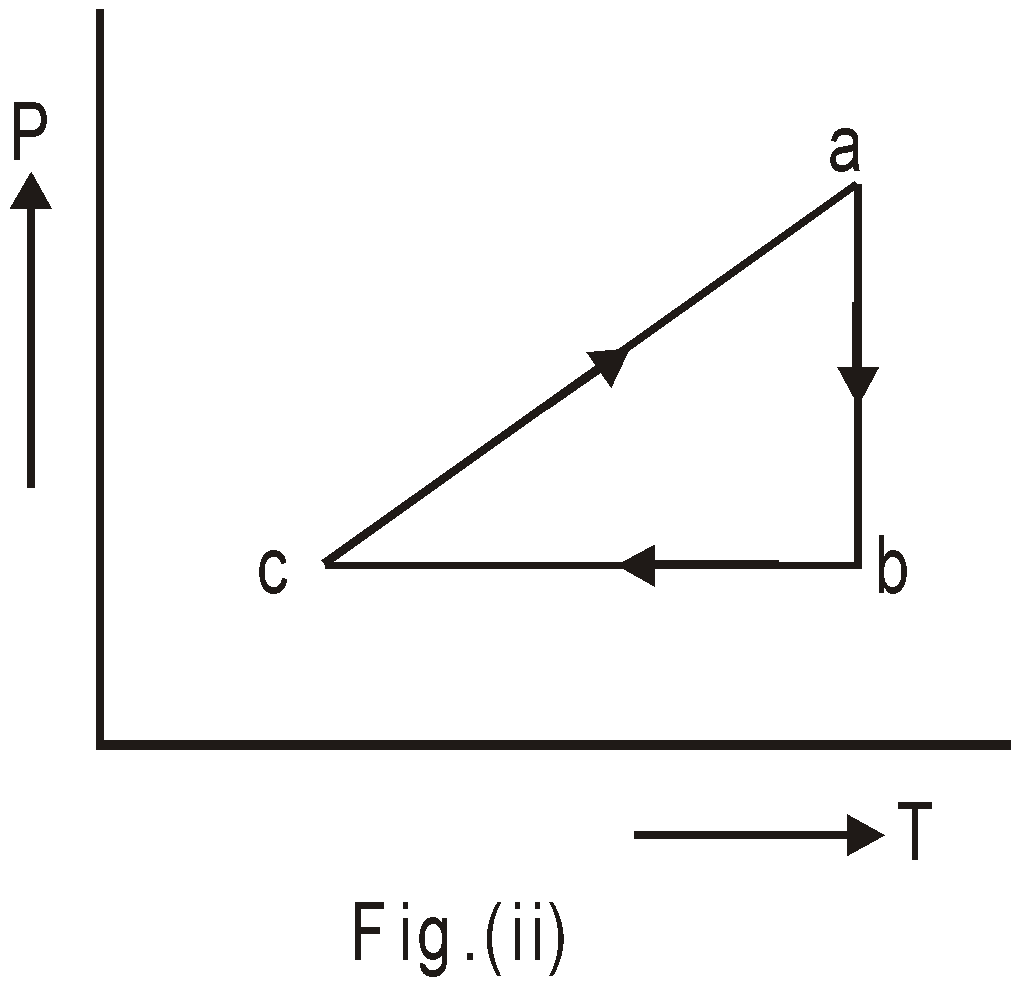 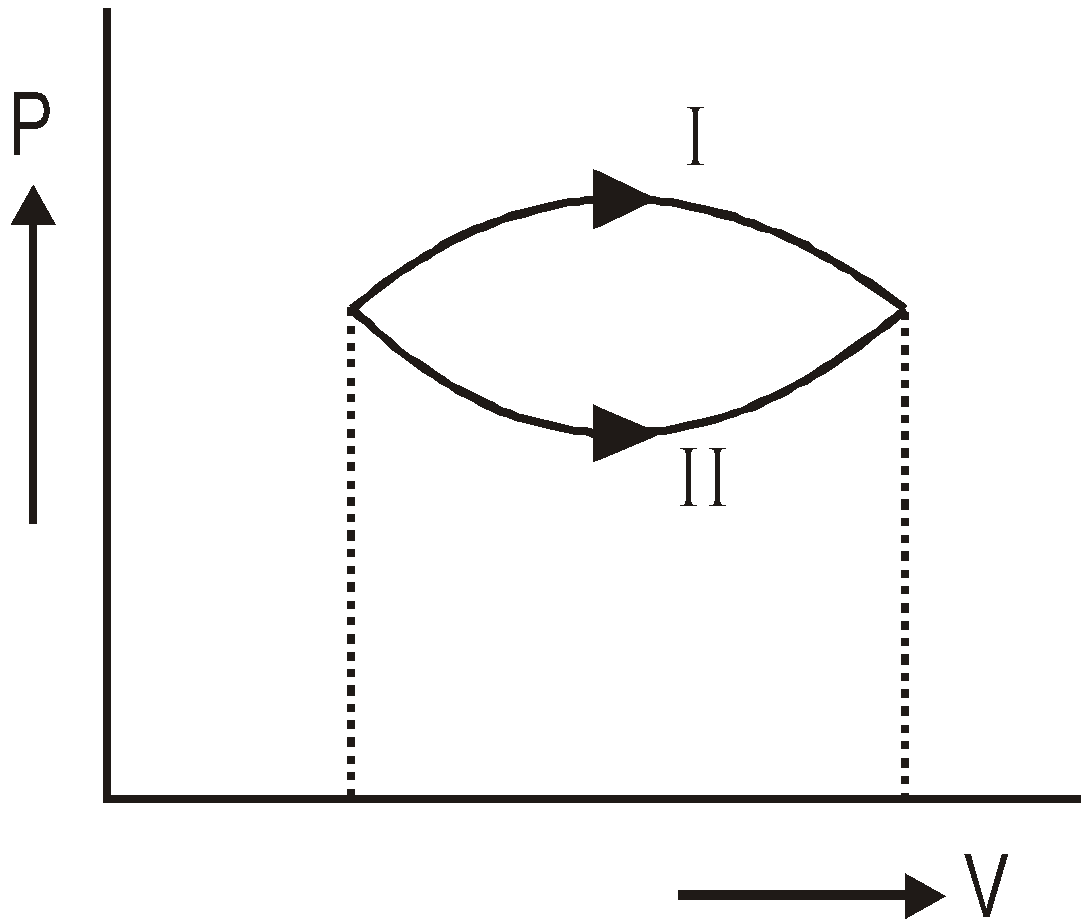 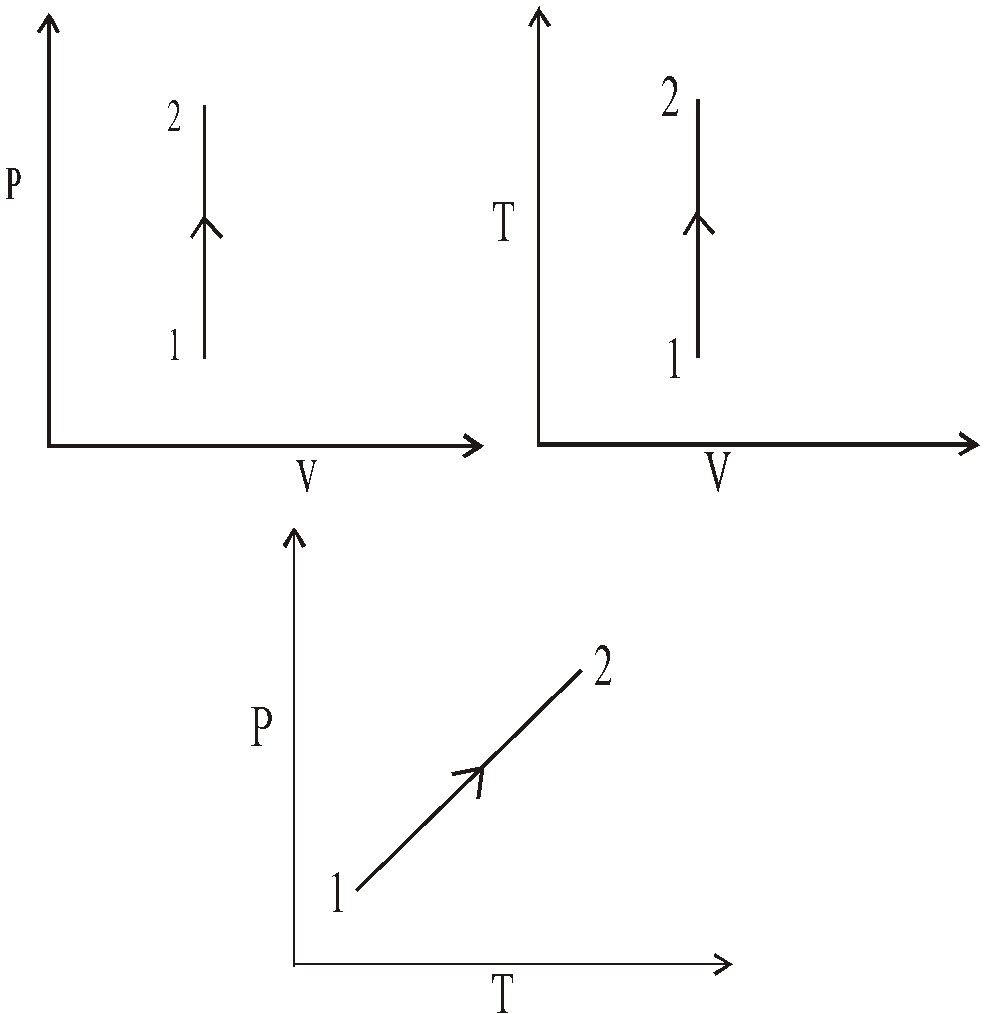 A process which can proceed in opposite direction in such a way that the system passes through the same states as in direct process and finally the system and the surroundings acquire the initial conditions.
CONDITIONS FOR A PROCESS TO BE REVERSIBLE
Examples : Fusion of ice, vaporisation of water, etc.

A heat engine is a device which converts heat energy into mechanical energy.

Efficiency of heat engine is given by

Refrigerator or heat pump is a heat engine running in backward direction i.e. working substance (a gas) takes heat from a cold body and gives out to a hotter body with the use of external energy i.e. electrical energy. A heat pump is the same as a refrigerator.

The coefficient of performance of refrigerator or heat pump is 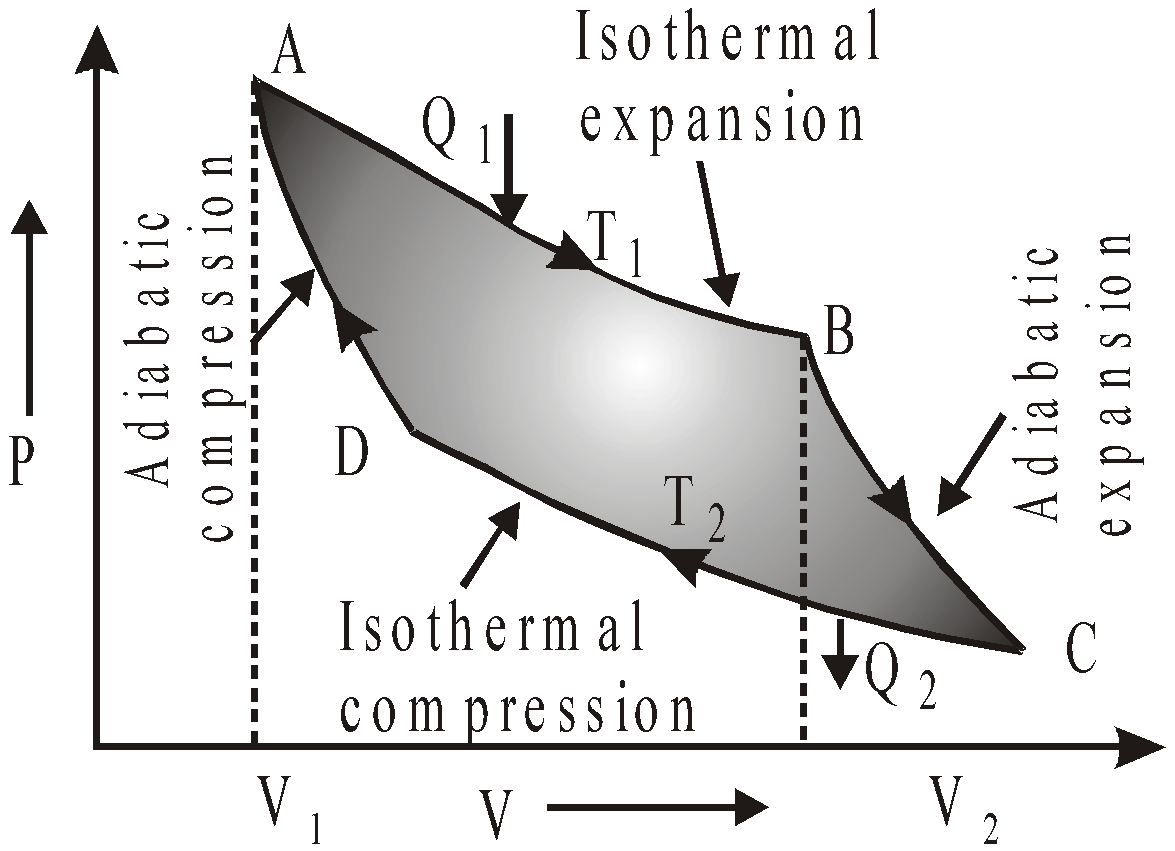 The percentage efficiency of Carnot’s engine,

The efficiency of a Carnot engine is never 100% because it is 100% only if temperature of sink T2 = 0 which is impossible.
In a Carnot cycle,

It states that it is impossible for a self acting machine unaided by any external agency, to transfer heat from a body at a lower temperature to a body at higher temperature.
It is deduced from this law that the efficiency of any heat engine can never be 100%.

Entropy is a measure of disorder of the molecular motion of a system. The greater the disorder, the greater is the entropy. The change in entropy is given by

is the microscopic form of entropy, where K is Boltzmann’s constant and ω represents the number of possible microscopic states.
When a hot body is brought into thermal contact with a cold body for a short time, then :

The effect of naturally occurring processes is always to increase the total entropy (or disorder) of the universe.
Prev Online Test Series 3: Daily Practice Papers – Thermal Properties of Matter
Next Online Test Series 1 -NEET & AIIMS Past Years based -Thermodynamics