Notes and Study Materials -Dual Nature of Radiation and Matter

DUAL NATURE OF RADIATION AND MATTER

When a very strong potential difference is applied across the two electrodes in a discharge tube and the pressure of the air is lowered gradually, then a stage is reached at which the current begins to flow through the air with cracking noise. The potential at which this happens is called sparking potential.

In fig.(a) we consider a single drop of mass m carrying a negative charge –q in the absence of electric field. Then 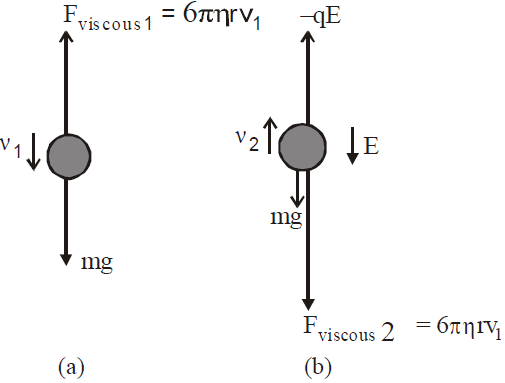 is coefficient of viscosity of air, r is radius of drop  and v1 is the terminal velocity of drop.
In fig. (b) we consider a single drop of mass m, radius r carrying a negative charge –q in the presence of electric field acting downward. Then by free body diagram (fig. (b)), we get

…(4)
where ρ is density of drop.
Millikan repeated these measurements on thousands of drops and he found that the charge q calculated for each drop was some integral multiple of an elementary charge e. (e = 1.6 × 10–19C).
Hence, q = ne,   n = 0, ±1, ±2  …(5)
This experiment gives the evidence of quantisation of charge.

Electrons from the metal surface are emitted by anyone of the following physical processes : 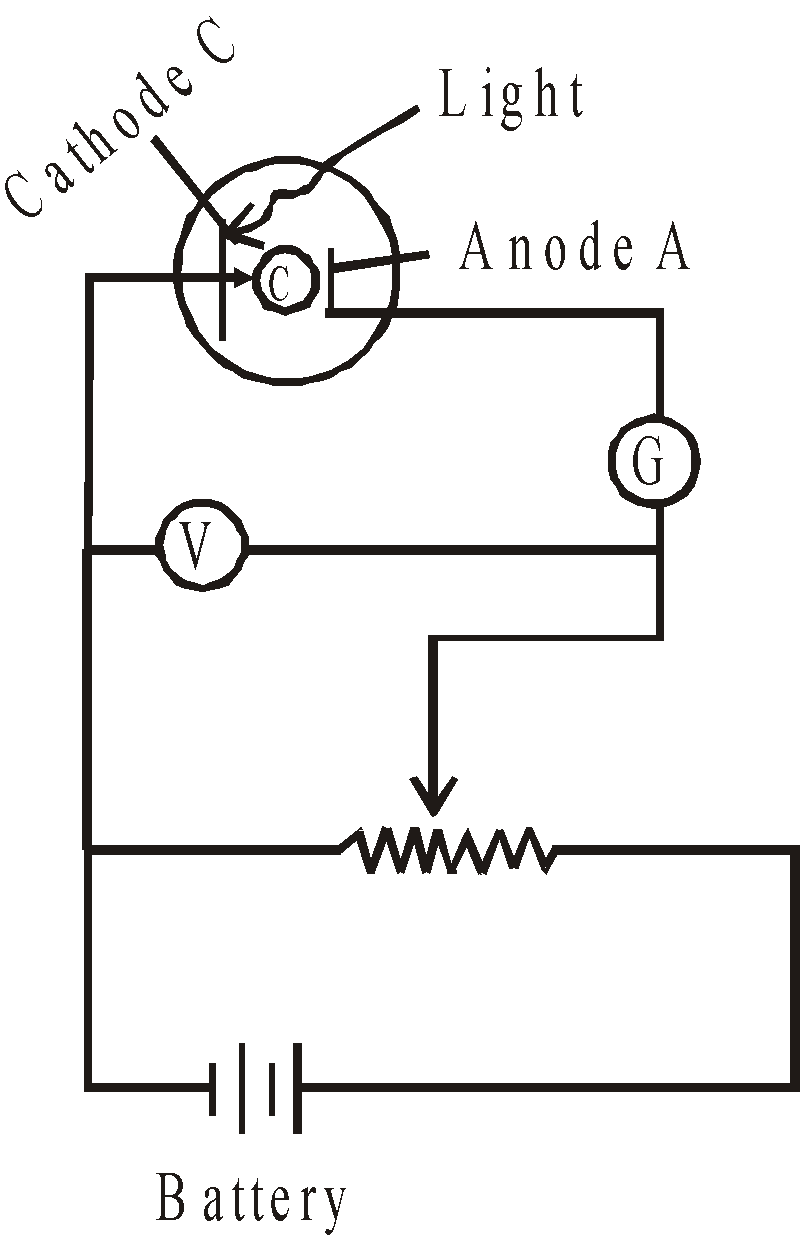 When light strikes the cathode C (metallic surface), photo electrons are ejected. Electrons are collected at anode A, constituting a current in the circuit. (Photoelectric effect)
Fig. shows, when light strikes the cathode C, electrons are emitted & they are collected on anode A due to potential difference provided by battery and constitutes the current in the circuit (observed by Galvanometer G.)
A plot of photoelectric current versus the potential difference V between cathode & anode is shown in fig below. 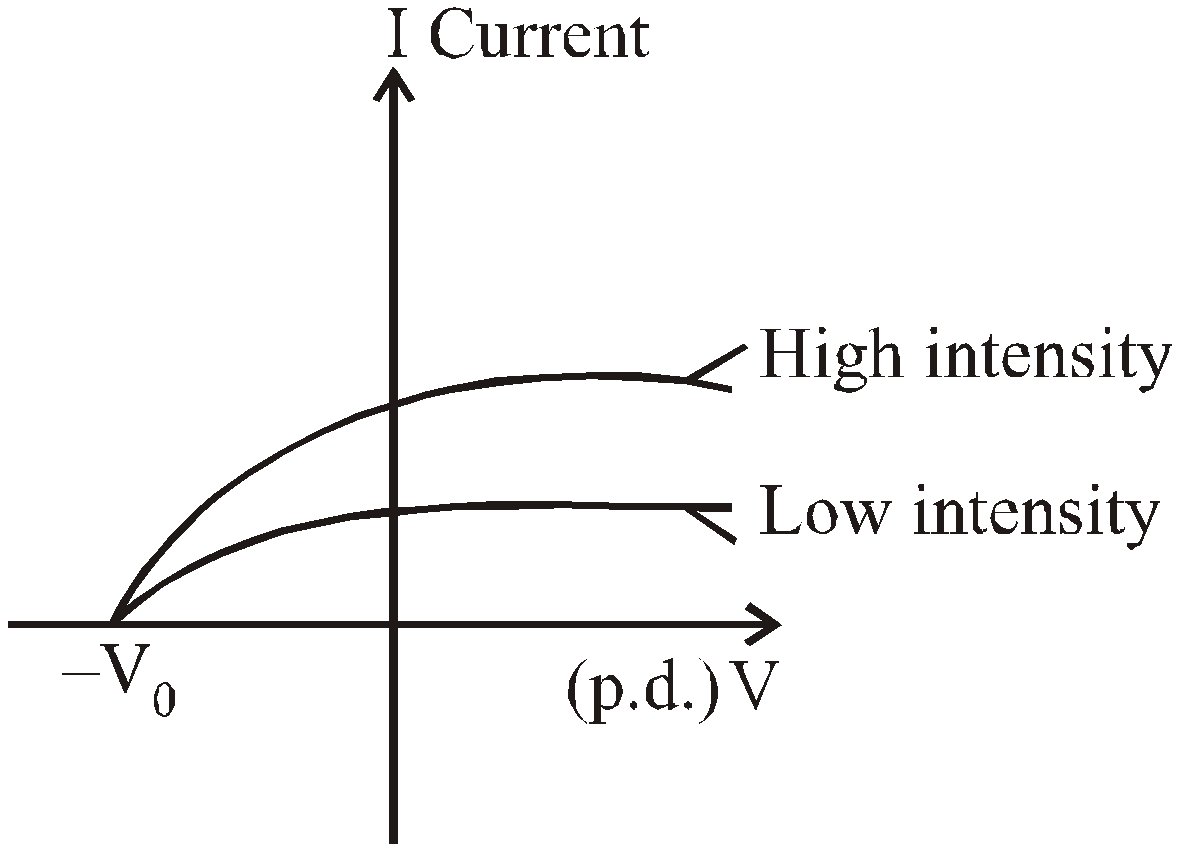 Photoelectric current versus voltage for two light intensities. At a voltage less than –V0 the current is zero.
It is clear from fig. that photoelectric current increases as we increase the intensity of light & obtain saturation value at larger value of potential difference V between cathode & anode. If V is negative then, photoelectrons are repelled by negative cathode and only those electrons reaches anode, who have energy equal to or greater than eV. But if V is equal to V0, called stopping potential (i.e., cut off. potential), no electrons will reach the anode
i.e., Maximum kinetic energy of electron = eV0
or  Kmax = eV0  …(1)
where e is charge of electron (e = 1.6 × 10–19 coulomb).
But some features of photoelectric effect cannot be explained by classical physics & the wave theory of light.
These above points were explained by Einstein in 1905 by treating the light as stream of particles.
Taking Max Planck assumptions, Einstein postulated that a beam of light consists of small packets of energy called photons or quanta. The energy E of a photon is equal to a constant h times its frequency ν
i.e.,

…(2)
where h is a universal constant called Planck’s constant & numerical value of  h = 6.62607 × 10–34 J.s
When a photon arrives at surface, it is absorbed by an electron. This energy transfer is an All-or-None process, in contrast to continuous transfer of energy in classical theory; the electrons get all photon’s energy or none at all. If this energy is greater than the work function (φ) of the metal (φ is the minimum energy required to remove the electron from metal surface), the electron may escape from the surface. Greater intensity at a particular frequency means greater number of photons per second absorbed & consequently greater number of electrons emitted per second & so greater current.
To obtain maximum kinetic energy

for an emitted electron, applying law of conservation of energy.
According to it

Photocurrent versus intensity of light graph 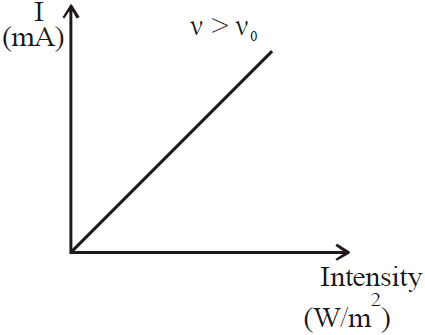 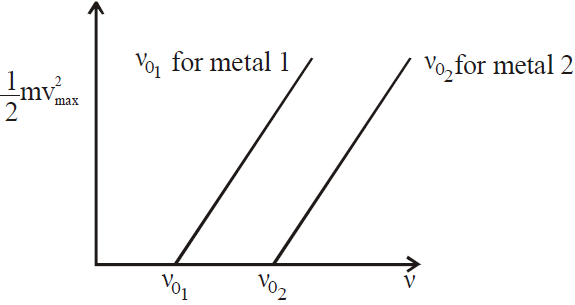 In 1924, Louis de Broglie, wrote a doctoral dissertation in which he proposed that since photons have wave and particle characteristics, perhaps all forms of matter have wave as well as particle properties.
This is called dual nature of matter.  According to which a matter particle moving with a velocity v can be treated as a wave of wavelength λ. This λ is called de-Broglie wavelength & it is defined as :

…(1)
where m is the mass of matter particle & these waves are called matter waves.
Further with the analogy of photon, the frequency of matter waves is

…(2)
The dual nature of matter is quite apparent in these two equations (equations (1) & (2)). i.e.,  each equation contains both particle concepts (mv & E) & wave concepts (λ & ν). It is clear from next topic that Compton effect confirm the validity of p = h/λ for photons, and the photoelectric effect confirms the validity and E = hν for photons.
de-Broglie wavelength associated with electron accelerated under a potential difference V volt is given by

de-Broglie wave is not an electromagnetic wave but the matter wave.

If V is the accelerating voltage applied then :
Energy E = qV ;
Velocity

Idea of de-Broglie wave was tested beautifully in 1926 in an experiment performed by C. Davisson (1881-1958) and L.H. Germer (1896-1971). They directed a beam of electrons at a crystal and observed that the electrons scattered in various directions for a given crystal orientation. 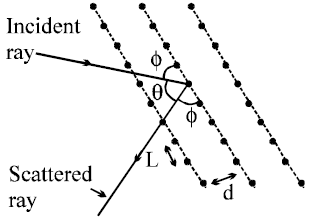 In this experiment the pattern formed by the electrons reflected from the crystal lattice of aluminium is almost identical to that produced by X-rays. This strongly suggests that the electrons have a wavelength λ associated with them and that the Bragg condition for X-ray diffraction holds true for electron also :
BRAGG’S EQUATION
nλ = D sin θ or nλ = 2d sin φ.
Diffraction maximum of electrons accelerated with 54 volt is obtained at θ = 50º for the Nickel crystal.
EXPLANATION OF BOHR’S QUANTUM CONDITION
Angular momentum,

Further experimental proof for photon concept (i.e., particle nature of light) was discovered in 1923 by American Physicist, A.H. Compton. According to which, when a monochromatic beam of X-rays (wavelength λ0) strikes the electron in a carbon target, two types of X-rays are scattered. The first type of scattered wave has same wavelength (λ0) as the incoming X-rays, while second type has a longer wavelength (λ) than incident rays (First type of X-rays are called unmodified x-rays, while second type of X-rays are called modified X-rays.) This change in wavelength i.e. Δλ = λ –  λ0 is called Compton shift & this effect is called Compton effect. 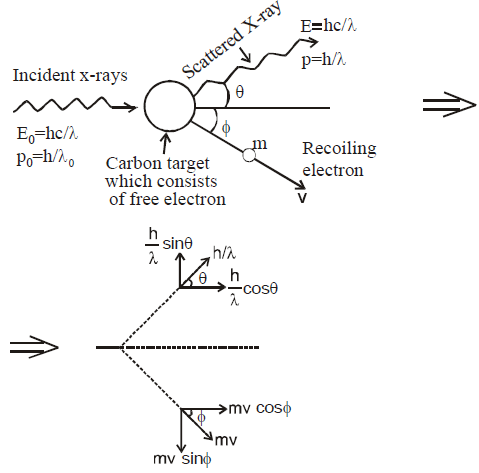 Diagram shows Compton scattering of an x-rays by free electron in a carbon target. The scattered x-rays has less energy than the incident x-rays. The excess energy is taken by recoiling electrons.
This effect cannot be explained by classical theory (by wave nature of light). According to classical model, when X-rays of frequency ν0 is incident on the material containing electrons, then electrons do oscillate & reradiate electromagnetic waves of same frequency ν0. Hence scattered X-rays has same frequency ν0 & same wavelength as that of incident X-rays.
Compton treated this processes as a collision between a photon & an electron. In this treatment, the photon is assumed as a particle of energy
E = hν0 = hc/λ0 …(1)
Further, the rest mass of photon is zero (because photon travels with the speed of light) hence the momentum of photon can be written as

…(2)
To derive the Compton shift. Δλ, we apply both conservation of energy & momentum.
CONSERVATION OF ENERGY

…(3)
Where hc/λ is energy of scattered X-rays, Ke is kinetic energy of recoiling electron & hc/λ0 is the energy of incoming X-rays. Since the electron may travel with the speed of light, so we must use relativistic expression of Ke in equation (3), and we obtain

y-component  …(6)
where pe = γmv is the relativistic expression for momentum of recoiling electron.
By eliminating v & φ from equation (4) to (6), we obtain

…(8)
It is clear from expression (7) that Compton shift Δλ depends on scattering angle θ & not on the wavelength.
KEEP IN MEMORY

Experimental observation and studies of spectra of X-rays reveal that X-rays are of two types and so are their respective spectras. Characteristic X-rays and Continuous X-rays.
CHARACTERISTIC X-RAYS
The spectra of this group consists of several radiations with specific sharp wavelengths and frequency similar to the spectrum (line) of atoms like hydrogen. The wavelengths of this group show characteristic discrete radiations emitted by the atoms of the target material. The characteristic X-rays spectra helps us to identify the element of target material.
When the atoms of the target material are bombard with high energy electrons (or hard X-rays), which possess enough energy to penetrate into the atom, knock out the electron of inner shell (say K shell, n = 1). When an electron is missing in the ‘K’ shell, an electron from next upper shell makes a quantum jump to fill the vacancy in ‘K’ shell. In the transition process the electron radiates energy whose frequency lies in the X-rays region. The frequency of emitted radiation (i.e. of photon) is given by

where R is constant and Ze is effective atomic number. Generally Ze is taken to be equal to Z – σ, where Z is proton number or atomic number of the element and σ is called the screening constant. Due to the presence of the other electrons. The charge of the nucleus as seen by the electron will be different in different shells.

Knocking out e– of K shell by incident electron ei emission of X-ray photon (Kα– series)
Another vacancy is now created in the ‘L’ shell which is again filled up by another electron jump from one of the upper shell (M) which results in the emission of another photon, but of different X-rays frequency. This transition continues till outer shells are reached. Thus resulting in the emission of series of spectral line.
The transitions of electrons from various outer shells to the innermost ‘K’ shell produces a group of X-rays lines called as K-series. These radiations are most energetic and most penetrating. K-series is further divided into

…. depending upon the outer shell from which the transition is made.
The jump of electrons from outer shells to ‘L’ shell results in L-Series X-rays and so on. 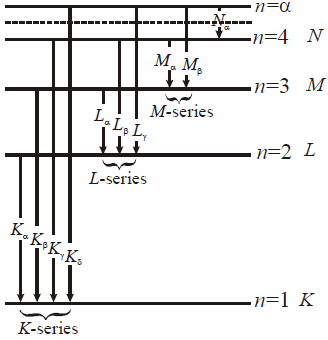 CONTINUOUS X-RAYS
In addition to characteristic X-rays tubes emit a continuous spectrum also. The characteristic line spectra is superimposed on a continuous X-rays spectra of varying intensities. The wavelength of the continuous X-rays spectra are independent of material. One important feature of continuous X-rays is that they end abruptly at a certain lower wavelength for a given voltage. If an electron beam of energy eV (electron volts) is incident on the target material; the electrons are suddenly stopped. If the whole of the energy is converted to continuous radiation, then λmin (corresponding to energy maximum) = hc/Ve where V is the voltage applied.

The classical theory of electromagnetism states that the suddenly accelerated or decelerated electrons emit radiations of electromagnetic nature called as bremsstrahlung (braking radiation) and wavelength of such radiation is continuous because the loss in energy is statistical. At the peak, the probability of maximum number of electrons producing radiation.
The wavelength of X-rays emitted is minimum corresponding to the electron which hits the target with maximum speed. This electron is completely stopped and will emit the photon of highest energy.
As the electrons lose energy by collision, longer wavelengths are produced the shape of the curve is statistical. 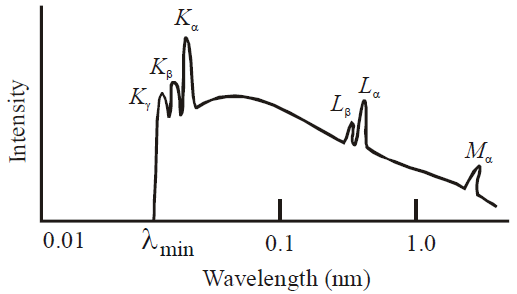 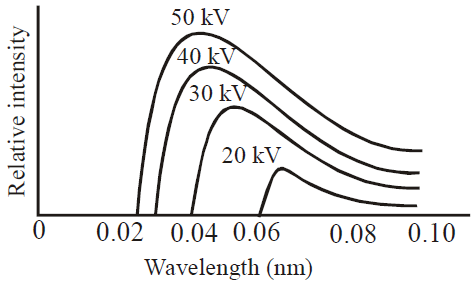 It is called Duane Hunt law.

where a and b depend on the particular line of the radiation
For Kα,

ν–3.
FLUORESCENCE
Certain substances (like quinine sulphate, fluorescein, barium platinocyanide, uranium oxide etc.), when illuminated with light of high frequency (ultraviolet, violet, etc.) emit light of lower frequency. The phenomenon is called fluorescence.
PHOSPHORESCENCE
Fluorescent materials emit light only so long as light is incident on them. There are certain substances which continue emitting light for some time after the light incident on them is stopped. This phenomenon is called phosphorescence. For example, if we make blue light incident on a zinc-sulphide (ZnS) screen, then it produces phosphorescence of green colour. Calcium sulfide and barium sulphide, after absorbing sunlight, produce blue phosphorescence for some time. Time of phosphorescence is different for different materials.
KEEP IN MEMORY

, where k is Boltzmann’s constant.