Notes and Study Materials -System of Particles and Rotational Motion

equation of rotational motion, comparison of linear and rotational motions; moment of inertia, radius of gyration. Values of M.I. for simple geometrical objects (no derivation). Statement of parallel and perpendicular axes theorems and their applications

Centre of mass for a system of particles is defined as that point where the entire mass of the system is imagined to be concentrated. If 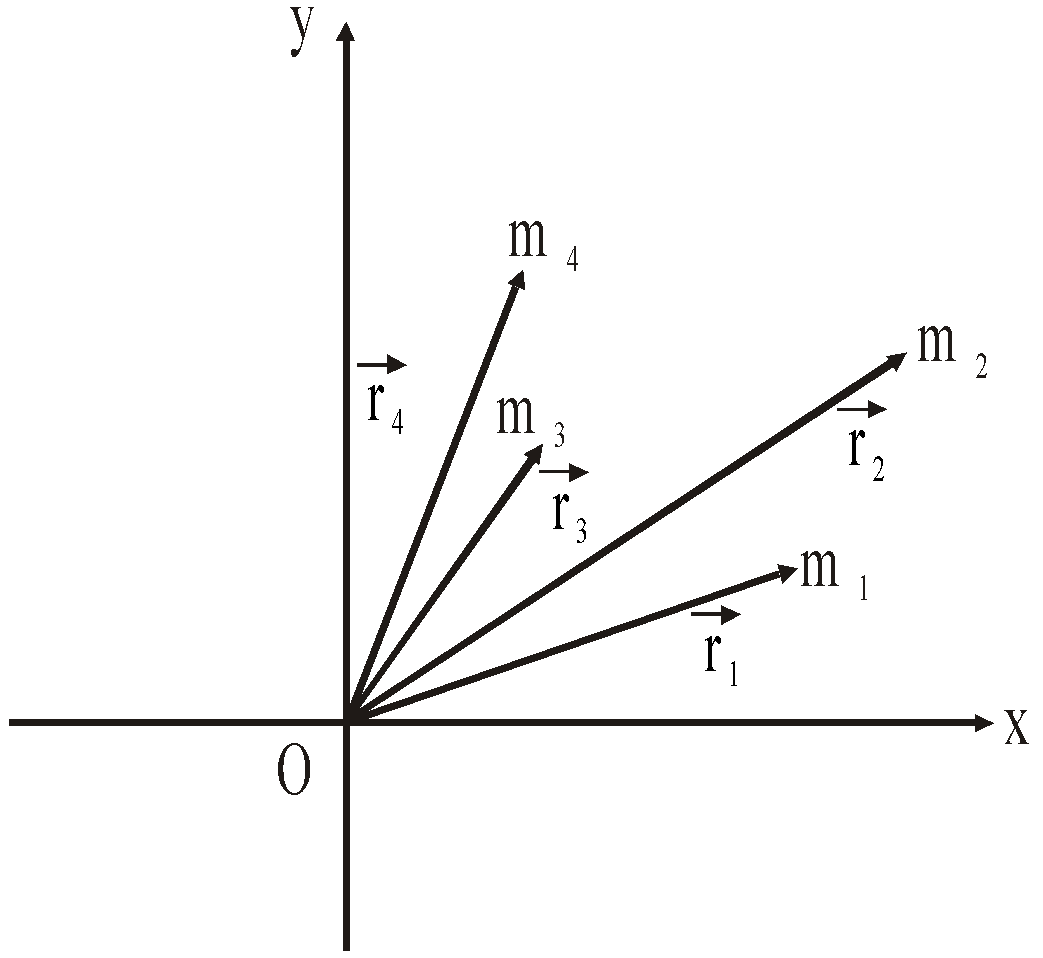 then the centre of mass of the system is

MOTION OF CENTRE OF MASS

Momentum conservation of a system of particles : In the  absence of external forces, the velocity of the centre of mass remains constant. We have, MAcm = Fext If Fext = 0

If a body does not undergo any change in shape by the action of a force, it is said to be rigid. If such body undergoes some displacement, every particle in it undergoes the same displacement. No real body can be perfectly rigid.

A body rotating about a fixed axis then every particle of the body moves in a circle and the centres of all these circles lie on axis of rotation. The motion of the body is said to possess rotational motion. KEEP IN MEMORY

so, for particles of equal masses the centre of mass is located at the mean position vector of the particles.

where, x, y and z are the coordinates of small mass dm and M is the total mass of the system.

The angular velocity is defined as the angle covered by the radius vector per unit time. It is denoted by ω. 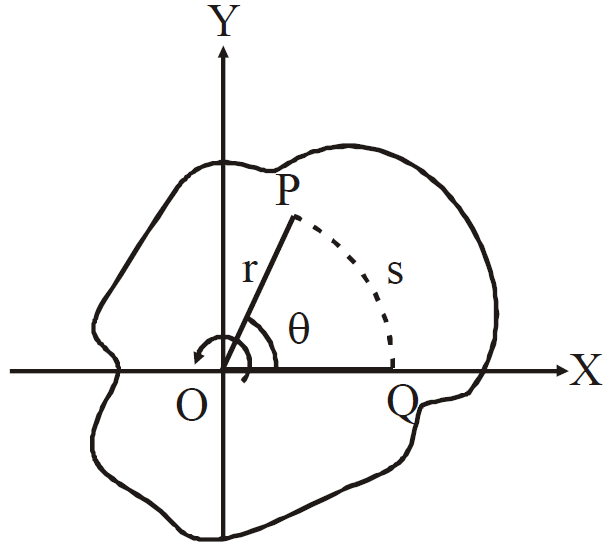 In analogy to linear acceleration

, the instantaneous angular acceleration is defined as

The unit of angular acceleration is rad/sec2. Relationship between angular velocity and linear velocity: 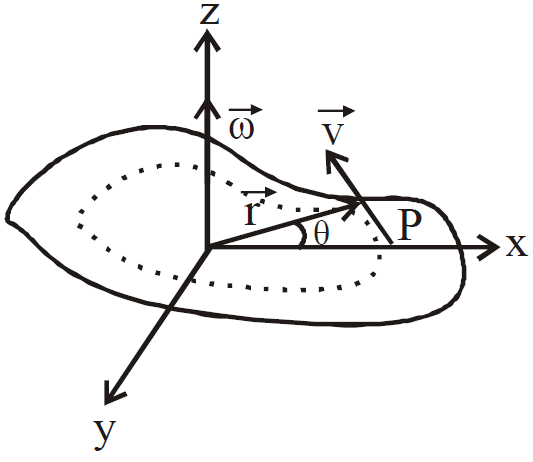 where θ is the angle between ω & r.

MOMENT OF INERTIA AND RADIUS OF GYRATION

The moment of inertia of continuous mass distribution is given by

where r is the perpendicular distance of the small mass dm from the axis of rotation. Its SI unit is kgm2. It is a tensor. 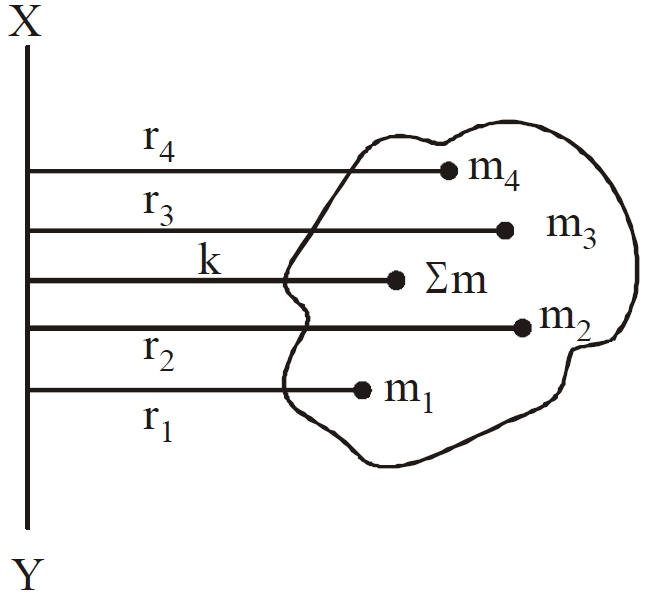 Therefore, radius of gyration (k) equals the root mean square of the distances of particles from the axis of rotation.

GENERAL THEOREMS ON MOMENT OF INERTIA 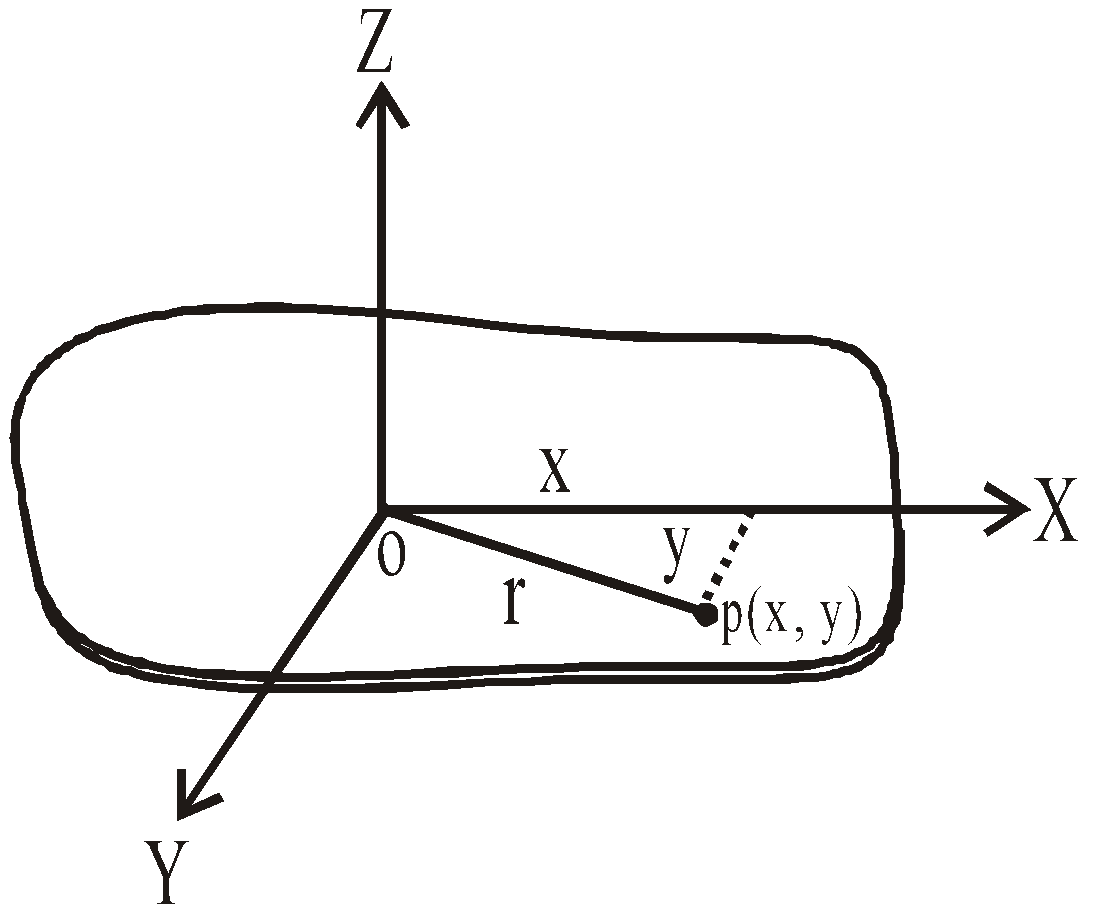 Ix + Iy = Iz   Let us consider a particle of mass m at point P distance r from origin O, where

(Derived by Steiner) This theorem is true for both plane laminar body and thin 3D body. It states that “the moment of inertia of a body about any axis is equal to its moment of inertia about a parallel axis through its centre of mass plus the product of the mass of the body and the square of the distance between two axes.” 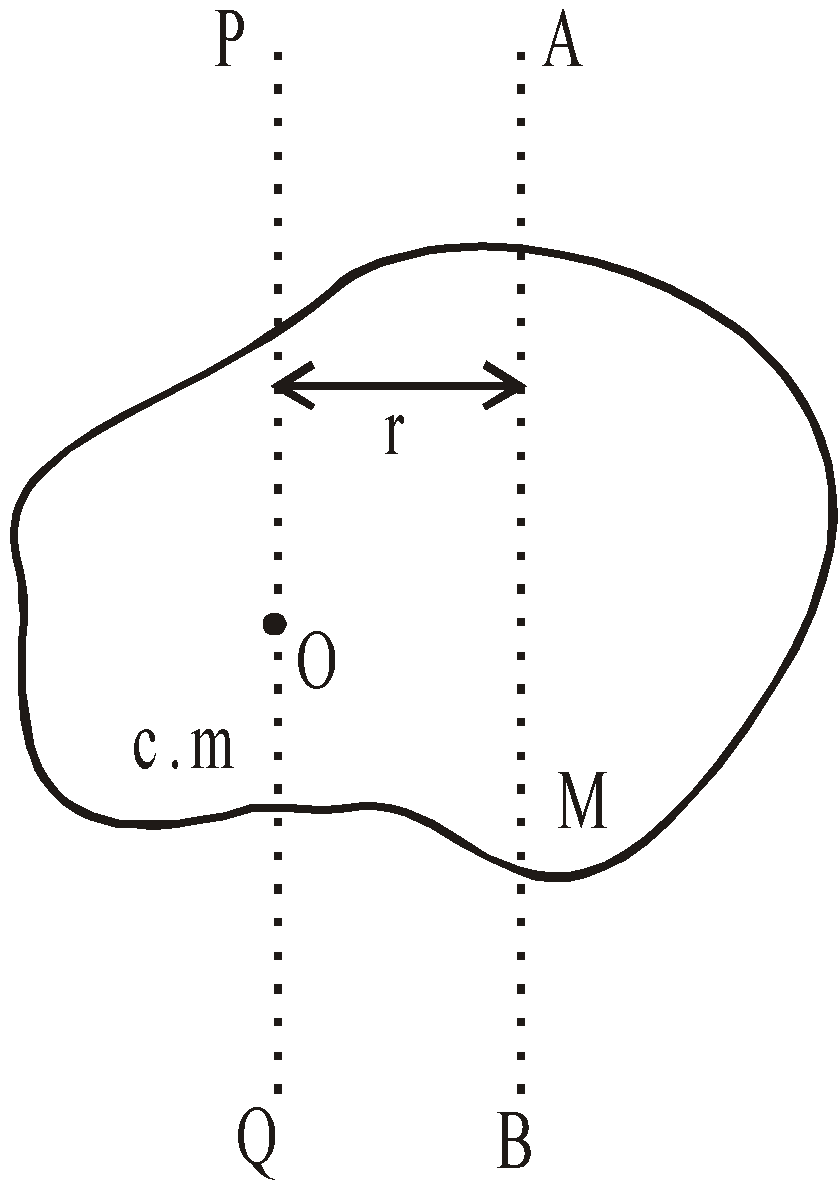 MOMENT OF INERTIA AND RADIUS OF GYRATION OF DIFFERENT OBJECTS 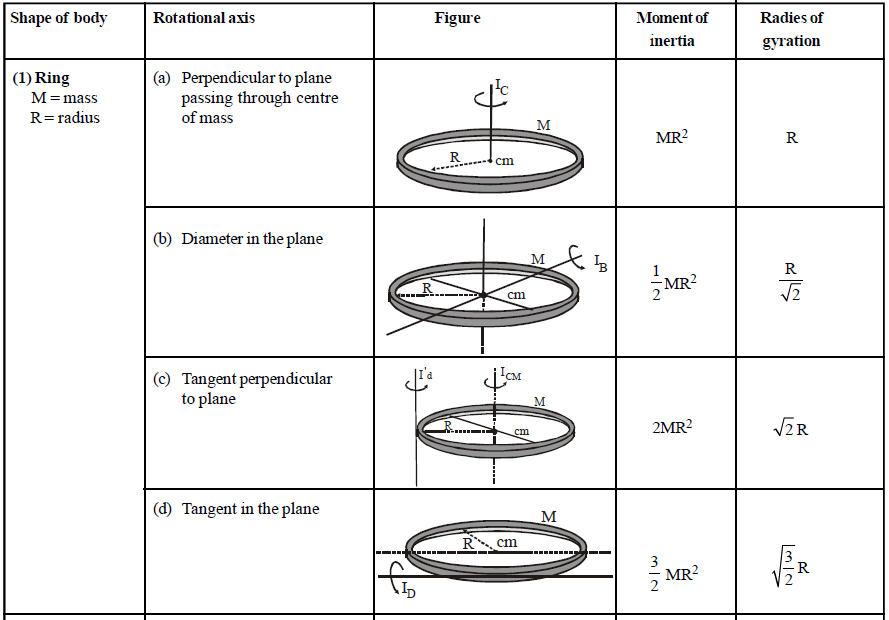 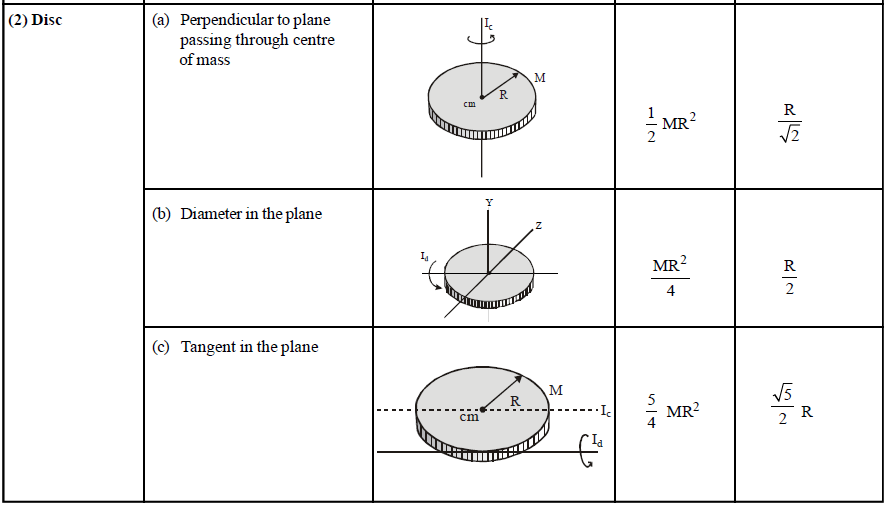 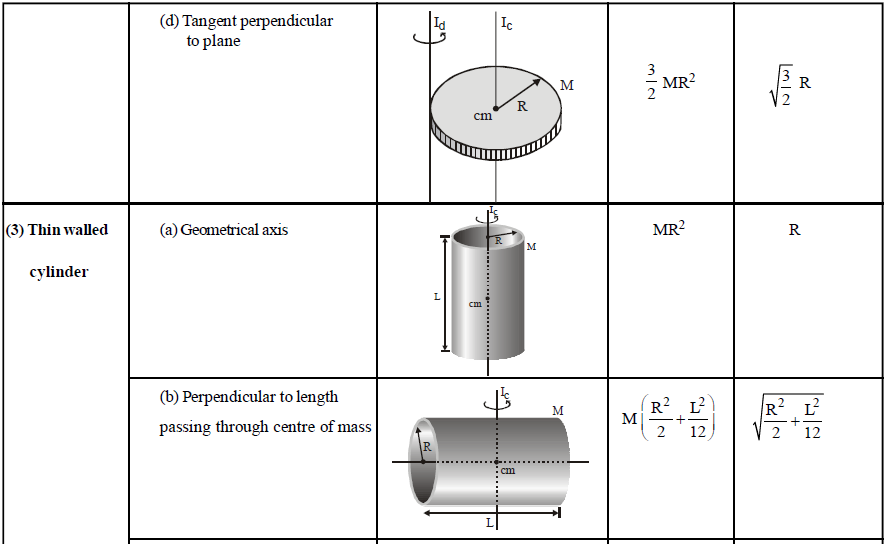 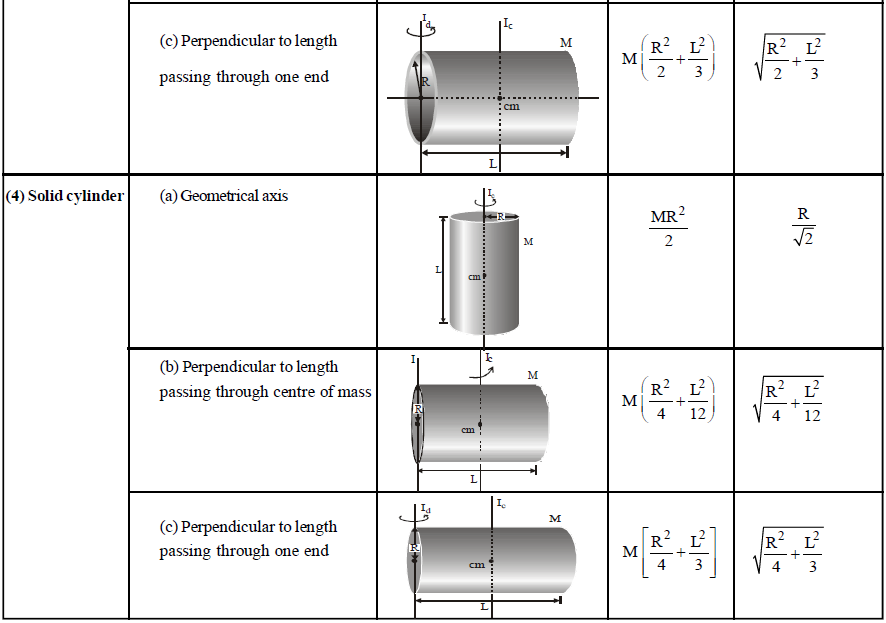 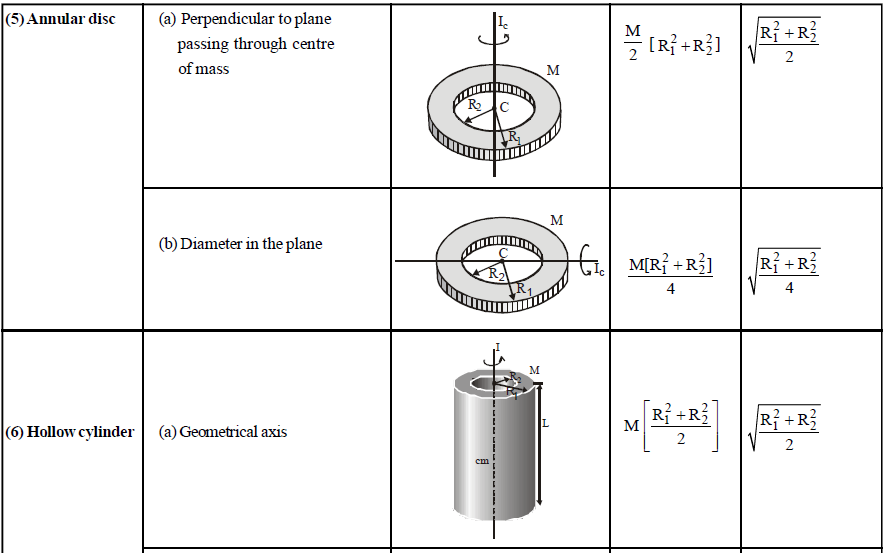 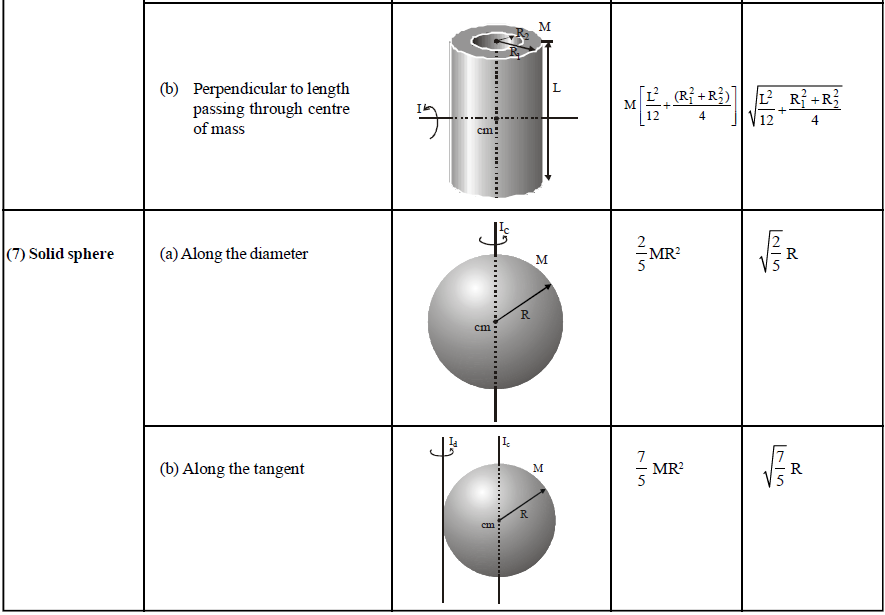 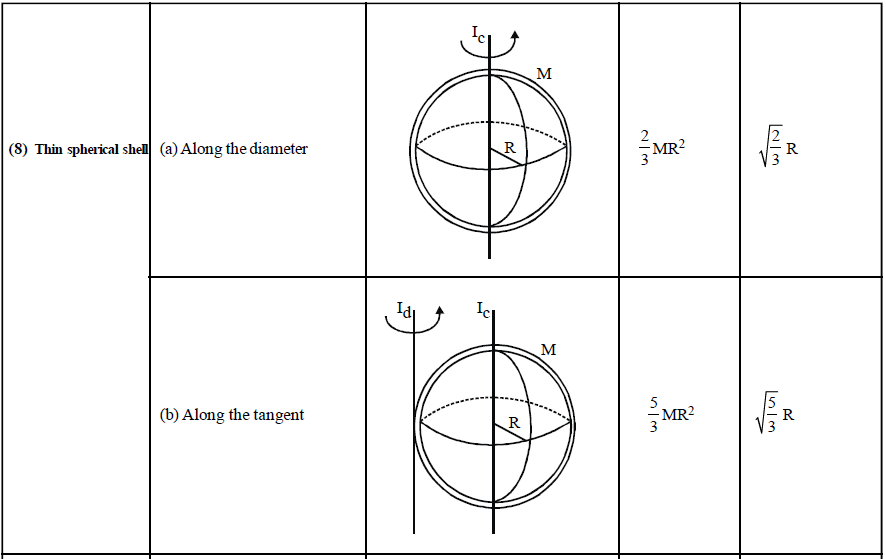 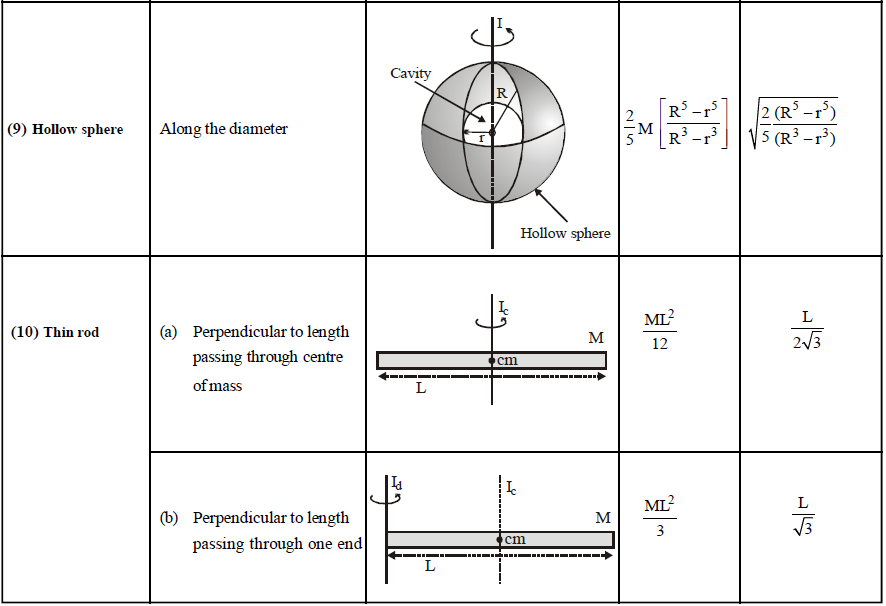 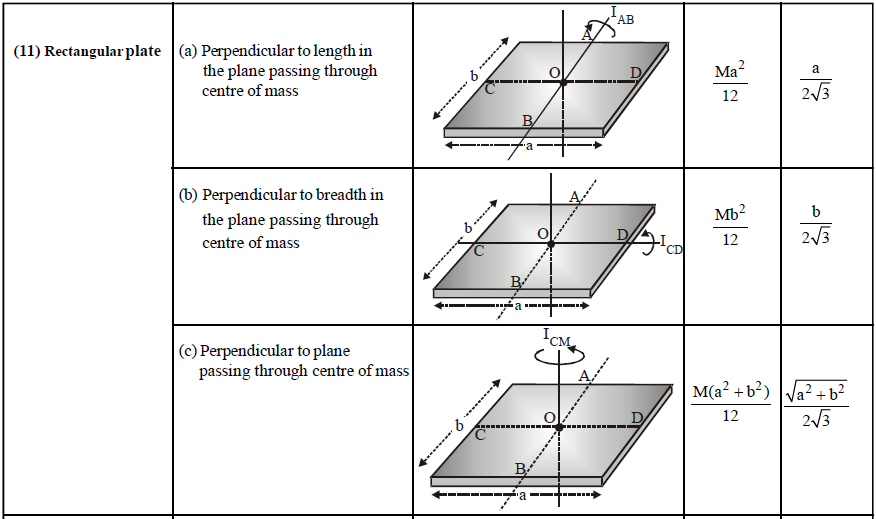 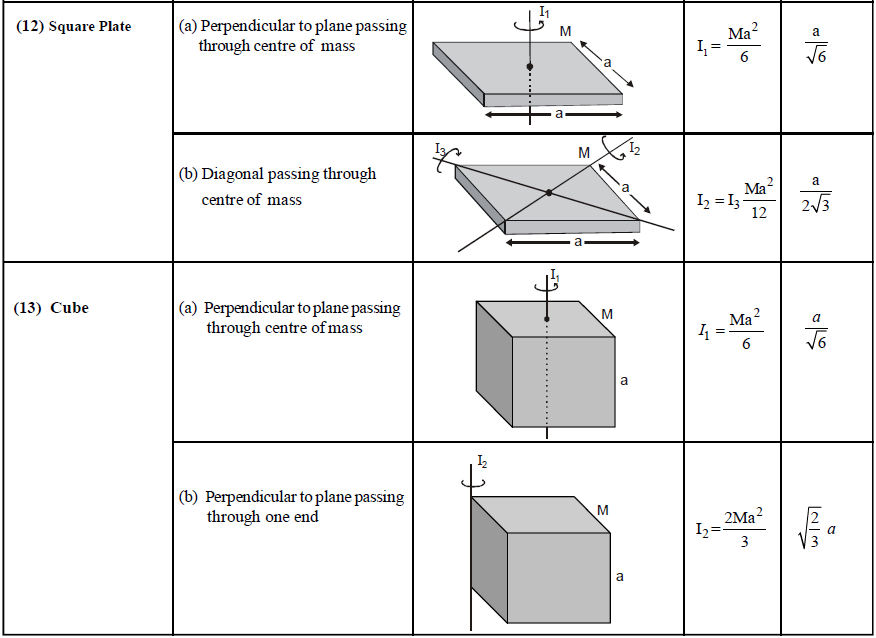 The moment of force is called torque. It is defined as the product of force and the perpendicular distance of the force from the axis of rotation. 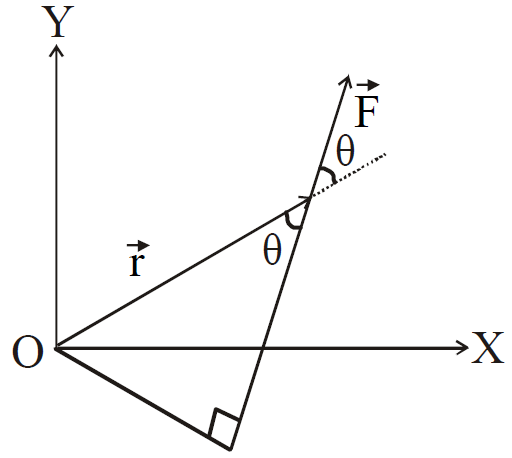 where θ is the angle between  and . Its S.I. unit is (N-m). The dimensions of torque [ML2T–2] are the same as that of energy but it is not energy. Note : If the line of action of a force passes through axis of rotation then no torque will be formed.

The angular momentum of a particle about an arbitrary point ‘O’ is the moment of linear momentum taken about that point. 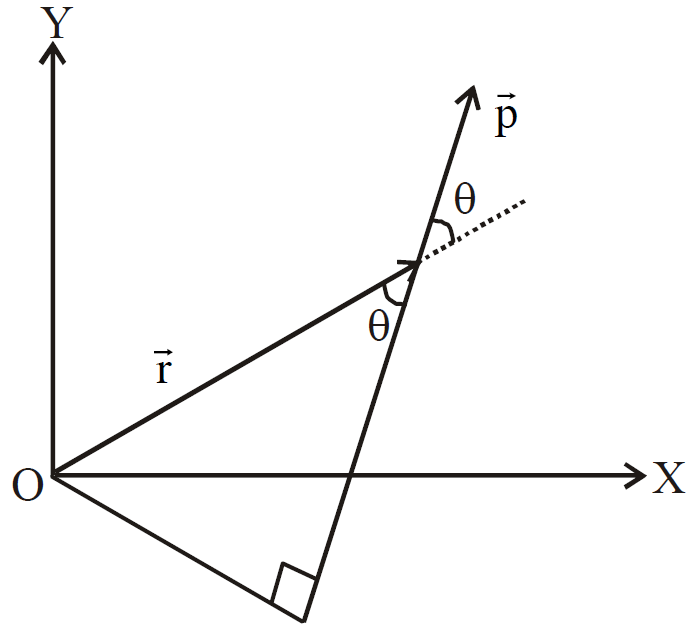 It is given as

where θ is the angle between

…(i) This is called law of conservation of angular momentum. According to this “if resultant external torque

According to this theorem “the work done by external forces in rotating a rigid body about a fixed axis is equal to the change in rotational kinetic energy of the body.” Since, we can express the torque as τ = Iα but  τdθ = dW ⇒ τdθ = dW = Iωdω By integrating the above expression, we get total work done by all external force on the body, which is written as

Let us consider a rigid body (collection of small particles) of high symmetry which is purely rotating about z-axis with an angular velocity ω. Each particle has some energy, determined by mi and vi. The kinetic energy of mi particle is 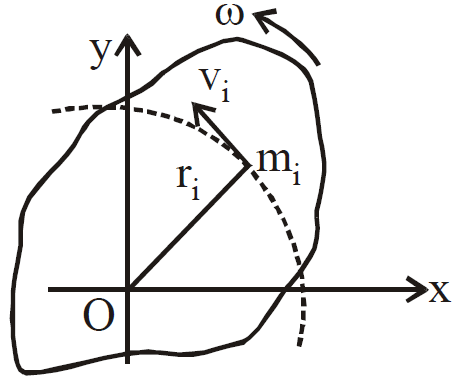 … (v) where, vcm = linear velocity of the centre of mass of the rigid body K = radius of gyration

BODY ROLLING WITHOUT SLIPPING ON AN INCLINED PLANE

When a body performed translatory as well as rotatory motion then we can say that the body is in rolling motion. Acceleration for body rolling down an inclined plane without slipping Let M is the mass of the body, R is its radius and I is the moment of inertia about the centre of mass and K is the radius of gyration. 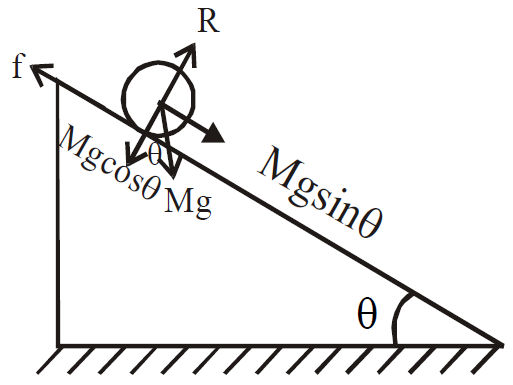 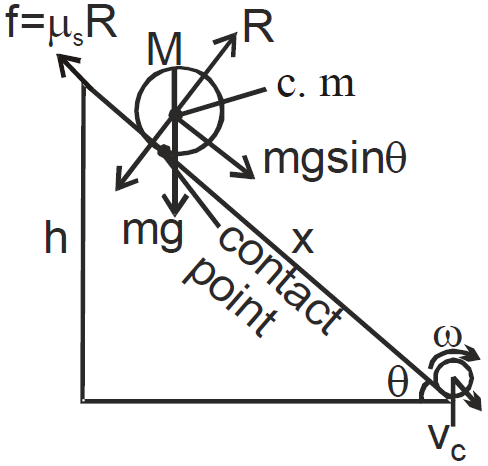 A round object rolling down an incline, mechanical energy is conserved if no slipping occurs. But mechanical energy of the body remains constant despite of friction because the contact point is at rest relative to the surface at any instant. For pure rolling motion vc = rω so

…(i) As body rolls down an incline, it loses potential energy Mgh (h is the height of incline). Since body starts from rest at top, hence its total kinetic energy at bottom given by eqn.(i) must be equal to Mgh at top i.e.,

….(iii) For rolling down an inclined plane without slipping, the essential condition is :

; μs is the coefficient of static friction where Icm is moment of inertia of the body about its C.M.

PURE TRANSLATIONAL MOTION In this case the velocities at all three points :

PURE ROTATIONAL MOTION In this case the velocity of 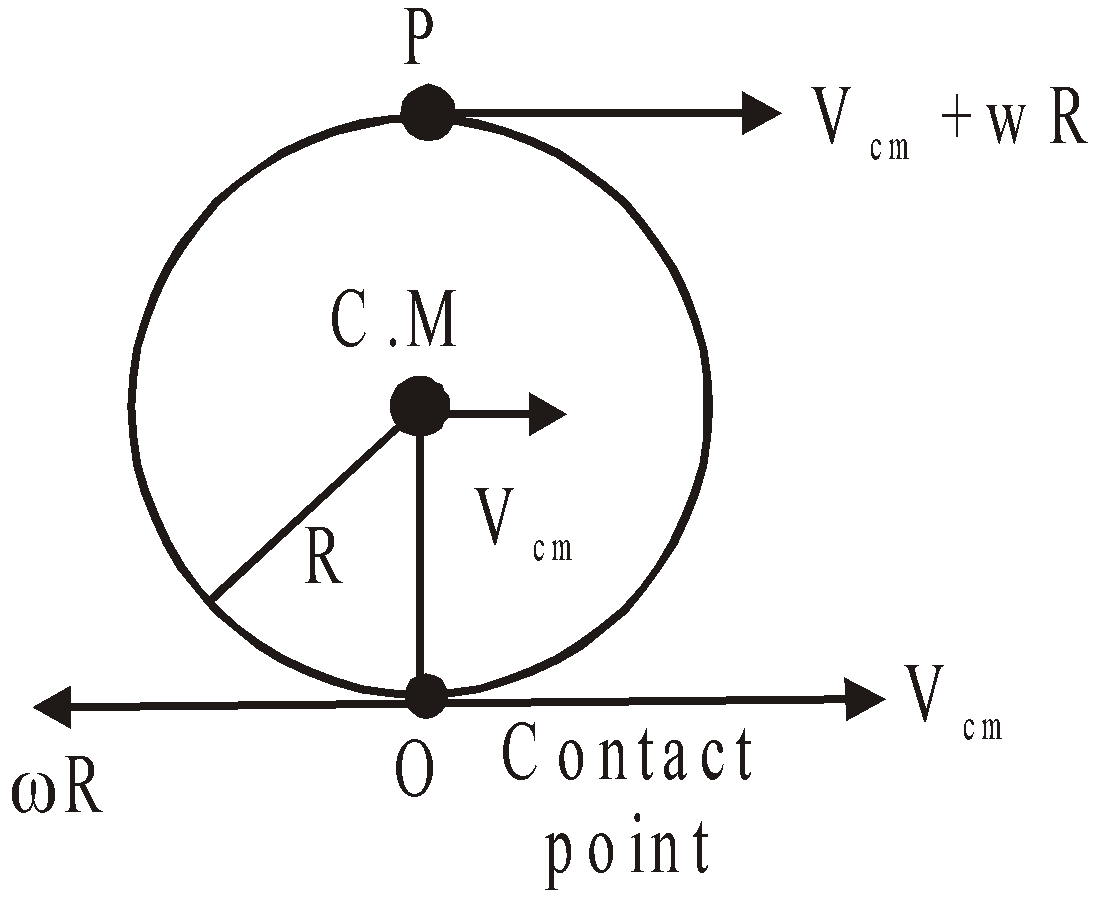 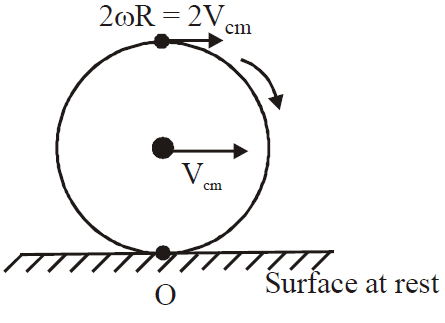 This is because For ring

and ω will be as below

∴ Graph between L and ω is a straight line. 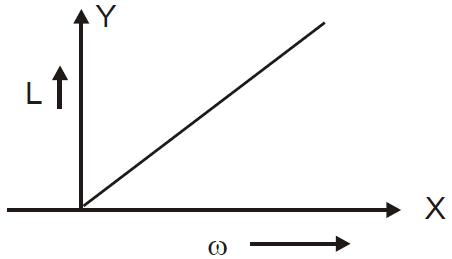